Famous Bulgarian singer speaks out on concerts, culture shocks and the big wide world of music

Bulgaria, singer songwriter Dyana Dafova is well known for her music – an inimitable blend of Bulgarian folklore and tunes from around the world that has a uniquely modern sound. But the true recognition of her talent comes from abroad: in 1998 Dyana Dafova watched the launch of the space shuttle Columbia at Cape Canaveral. On board was her "Ahadyah", a song from her Sounds of the Earth album, recorded in the Netherlands. "Taliesin" from Charisma – Spiritual Grace won first prize in the world music category at the USA Songwriting Competition 2000, and took third prize overall out of 15 categories and 35,000 participants from around the globe.

Last October her album Charisma – One World in Song, which was released and distributed in the United States by KRB Music, Nashville, reached No.6 on the New Age Reporter Top 100 chart of world music and was nominated for the best album and best vocal awards in 2008.

Dyana is also among the few European artistes who have performed for the US Army. Her concert in the Camp Bondsteel military base in Kosovo in 2002 won her five medals of excellence. But there is more to her humanitarian work: Dyana is also a UNHCR ambassador, for which she received a UN medal in 2007. The following year, the Senate of Texas also acclaimed Dyana for her international achievements in art with a special proclamation No.470. Her fans include the late Pope John Paul II and US Secretary of State Hillary Clinton, who has Dyana's albums in her personal collection.

Dyana comes from a musical background. With a diploma in piano and singing from the Music Academy in Sofia, she has developed a style of her own. She writes her own music and some of her lyrics and sings in 14 languages, including Bulgarian, English, Sanskrit, Latin, Italian, Aramaic and Native American. Married to Englishman Michael Butterfield, the singer travels between her homes in Sofia and Houston, Texas, to engagements in Europe, the United States and Asia.

Your music is an inimitable mosaic of Bulgarian folklore and Eastern Orthodox, Celtic and Native American tunes, plus soul and other musical styles. Where do you work?

I make my music in Bulgaria – we have wonderful musicians and excellent professionals. The quality of what my arranger Danail Draganov and I create is of world class level.

Is this why you live mainly in Bulgaria?

I am not the kind of person who could leave her country for a long time. I find inspiration here; my music is built on Bulgarian intonation and Bulgarian tradition. I also use a lot of folk motifs, authentic instruments and choirs.

You sing in different languages. Are they a source of inspiration or a way to get to the hearts of more people?

My music carries messages about the bond between people that comes from the past but is directed towards the future. The ancient languages that I use are replete with wisdom and strong vibrations. My lyrics show what people all over the world have in common; they are a plea for love, positiveness and tolerance. Nothing has been put in them for its own sake; everything has been carefully thought over and selected.

As a rule, world music is more exciting when listened to live. Which is your best concert so far?

Each concert I give has its own unique face and differs from the previous ones, so I can't say which is the best. Recently, my concerts in Chicago and Washington were particularly successful.

How are your concerts in Bulgaria and the United States different?

My concerts are complete shows, with a choir, a band, dancers and a variety of costumes, choreography and music inspired by the cultures of the world. What makes them different is probably the reaction of the audience. I can't say that there is no appetite for such things in Bulgaria, but in recent years performances that are miles away from real art, good taste and professionalism seem to have become the fashion. When you present a higher class of art, it scarcely reaches the people, because the media do not consider it commercial and marketable enough. 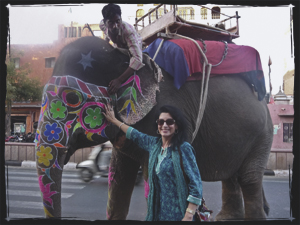 Is this why most of your performances are abroad?

Unfortunately, in the past few years Bulgaria has seen the spread of a rather mediocre taste; there is a lack of aesthetic values. I'd like to give more concerts in my country and hear my music played on Bulgarian radio stations, but they keep on telling me that I am an elitist singer and songwriter.

Your job involves a lot of travelling. What do you find best about these trips?

Meeting different people and diverse cultures, getting new impressions and ideas and the inspiration I draw from them.

How do you unwind?

I like being away from Sofia. The city has become a burden for me recently, mostly because there is a lot of negative energy and stress accumulated there and this affects me. When I go to the Rhodope Mountains, I feel wonderful.

Could you recommend three destinations in Bulgaria?

There are more than three. The Rhodope Mountains, because of their majestic scenery; the area of Krastova gora, or the Forest of the Cross; Veliko Tarnovo and Koprivshtitsa – wonderful places that have preserved their authentic character and Bulgarian spirit.

Are there places that foreigners and expats should avoid?

I wouldn't recommend the Black Sea coast – it is overbuilt and commercialised and the beauty of towns such as Sozopol and Nesebar has been buried or concealed.

You have a British husband. How do you deal with the culture shock?

There is no culture shock and there never has been. We are both open-minded people with rich experience. We have a lot of interests in common and this makes us close. Besides, the feeling that we are citizens of the world goes beyond any borders and cultural differences.