© Daniel Lekov
Digging in useless junk and the Belogradchik Rocks

At the Zlatna roza, or Golden Rose, Film Festival in 2008, Ernestina Shinova won the Best Leading Actress Award for her performance in Hindemith, a film directed by her husband Andrey Slabakov. She worked double time to earn it – she plays both main characters, who spend their days obsessively watching commercials and buying the latest Hindemith brand products. A parody of the nouveau riche's consumer lifestyle, the film strikes a rare balance of humour and melancholy.

Although she has hit it big on the Bulgarian screen, Shinova considers herself a "citizen of the world." She lived in Italy for nine years after winning a competition to study acting. However, nostalgia and her wish to give birth to her daughter, Yoanna, in Bulgaria brought her back home.

What was the hardest part about filming Hindemith?

I had to sacrifice my vanity to a large extent: to play two different characters forced me to distort my own appearance. However, I'm not afraid of looking ugly on screen as long as it serves the role. Also, we shot the film in the fields of Gorublyane near Sofia during an exceptionally cold summer. I had two silk dressing gowns to help me stay cool in the heat, but the weather didn't cooperate.

What is the film's message?

The film's main theme is truly universal – how society has changed into a mass of consumers. This raises the question, "What are we really living for?" You don't need to make a high-brow film to communicate a serious message. Art is infinitely rich in its means of expression. That's what we're trying to show with our film – that even while laughing you can get the message; you don't necessarily need to be crying. I really like those viewers who chuckle throughout the film's 100 minutes and afterwards say "Wow, what a sad film!" The film is meant to entertain and to get people to think about the society we live in – you can't get anywhere in life merely by being a consumer. It reminds me of a museum of useless things where an expensive pen made by NASA for use in space was on display next to the simple pencil Gagarin used to write while in orbit. The problem is our constant desire for newer and more expensive things that in the end we don't really need.

Hindemith is part of Andrey Slabakov's Travelling Bulgarian Cinema project and will be shown all over the country. How do you think audiences will react to it?

Such initiatives have convinced me that it's not true that Bulgarians don't like watching Bulgarian cinema. People don't go to the movies just for fun: they take an active interest in them and search for new films. Hindemith communicates with the audience on many levels and has also resonated well with foreigners. In future we have plans to expand the programme.

What film would you recommend to foreigners in Bulgaria?

Of course, Hindemith – I've seen with my own eyes that foreigners enjoy it. I recently found myself at a showing of Svetoslav Ovcharov's new film The Only Love Story Hemingway Didn't Write, which I wouldrecommend too. I don't think Bulgarian films have to be about Communism to capture people's attention. That topic has long ceased to interest young people. 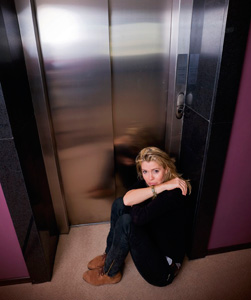 Are you a globetrotter?

I'm crazy about travelling. Before my daughter was born, I would hit the road with only a toothbrush, cash and my passport. Now, of course, I have to take along a lot more stuff, depending on where we're going. Once I ended up almost at the North Pole in just a T-shirt, so since then I always take extra clothes with me. I lived in Italy for nine years and still one half of me is there, the other here. Travelling means you are communicating with the world.

Why a citizen of the world?

I've talked with many foreigners and many Bulgarians abroad from all walks of life. Not all of them have been very well educated, some can neither read nor write, but I find their conversation always highly stimulating. I always try to get to know people, as they are what matters in a country. It is they who create a nation's image, not the natural landscape or the sea or beautiful buildings. What place in the world would you like to visit most?

China. That's my dream. I have some friends there, so I think I would be able to get a deeper look at the country and not just the tourist attractions.

How do you relax?

One of my favourite things is to go to a sanatorium – it's quiet, calm and there are people to take care of me. There I can totally relax. I also love the absolute wilderness of the Strandzha, where I can hike around and imagine the rituals that were performed there in honour of the goddess Isis. I love being out in nature, so Bulgaria is ideal for holidays.

What are your favourite places in Bulgaria?

The Belogradchik Rocks are a magical and divine place. If the makers of The Lord of the Rings had seen the place, they would've shot the film there – it's the perfect home for elves. It's especially picturesque in autumn – the grass is still bright green, the trees are a brilliant red, like in a fairy-tale. One other favourite place for me is the village of Brashlyan in the Strandzha. There you can find temples to Isis and all sorts of ancient mysteries all over the mountains. The atmosphere in the forests is very mystical and intriguing.

Yes, but I'll keep them a secret – not because of some misguided patriotism, but because I hope we Bulgarians will take care of these places.