Sofia is Bulgaria's symbol of the "glocal," that interaction between global and local

Many branches of the arts are struggling in the current economic climate, but there are still examples of culture that show how, with courage and vision, much is possible. The international Sofia Poetiki Festival is one. Since 2010 it has attracted prominent artists from Bulgaria and abroad, creating an ingenious mixture of poetry, prose, dance, theatre and performance. The man behind Sofia Poetiki is a poet and writer himself, Yassen Atanassov. Born in 1971 in Sofia, Atanassov still runs on the boyish energy which has made him one of the most electrifying figures on the modern Bulgarian arts scene. He is the author of five books, one of which Svyat za izpivane, or A World For Drinking, won the Spirt and Spirit 2010 Award. As a publisher, he published names like Robert M. Pirsig and Henry Miller, and created the cult, but now defunct, literatary magazine Ah, Maria. He has worked as a journalist and a magazine editor and hosted a culture show on TV. He graduated in culture sciences from Sofia University, specialised in philosophy and arts in Milan and culture management at the French Culture Ministry. 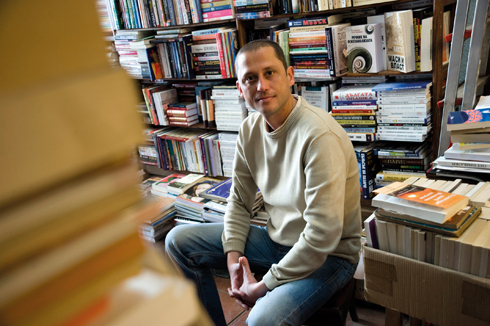 How and why did you start writing?

It all began, naturally, with reading. If you want to turn life and living things into a text, you need to have not only a peculiar sensitivity towards reality, but also to submerge yourself into the parallel universe of texts. I have been an avid reader since childhood. As a child, I would spent half the day wandering around the construction sites which later became Sofia's Mladost neighbourhoods, fighting with rival gangs of boys, raiding the Agronomical Gardens and saving kittens from dusty basements. The other half of the day I would read, sometimes devouring two or three books in a day. I read everything – literature, popular science, biographies, you name it.

So, it seemed quite logical when my father, the poet Atanas Zvezdinov, then an editor in the Narodna Mladezh publishing house, started giving me manuscripts of books written for children and young people, looking for my opinion. My opinion quickly turned into editorial analysis. I would ask myself why a certain scene followed another, or whether an adventure sequence where the hero fights an anaconda, is chased by a puma and is overwhelmed by termites in just a few pages was not over the top. I became an editor even before becoming a writer... I started writing in high school. It was poetry. Why? Because I could create worlds dependent only on me. It was also a form of protest – not only because I was writing in a different manner, but because I loved to demonstrate my independence in a world full of dependence. These were the years before the collapse of Communism, in 1987-1989. After the changes, my wild desire for freedom did not ease, but expanded, mirroring the downfall of the so-called Transitional Period, when society went in an anti-intellectual direction. So I changed from poetry to prose. To sum it up: poetry fits the inebriation of the revolution and prose is for the hangover after it.

Tell us more about your favourite projects.

My absolute favourite project – and the most difficult one, as it somehow always manages to slip away – is my life. To live, if not exactly in the way I want to, but at least in a different manner. Not to weaken under the common conventions, to manage to impose my own rules, to do things that excite me. In short – to "consume" the freedom which is often on the tip of one's spoon, but which few people even notice.

This attitude explains why my favourite projects are, indeed, all the projects I have ever done. Because I have chosen to make them and their destiny dependent on me, I cannot single out as "favourite" one particular field of my interests and work – literature, journalism, publishing, culture management, science.

Sofia Poetiki Festival, however, is probably the noisiest and liveliest of my children. That is possibly why recently I have been trying to step back from it. I want to entrust it to new "tutors," to let it leave home. I want to concentrate on my next book. And let's not talk about my abandoned doctoral thesis!

What are you working on at the moment?

A novel I have been postponing for quite a long time. Writing, specifically long prose, demands that you live in another existential time. This time is often not compatible with calendar time. I do not mean the "usual" problem, where you need to do something else because literature cannot feed you. I mean the very awareness that writing will limit your freedom. To fall asleep thinking: "Fuck it, I will ditch everything and will eat only potatoes, but I am finishing that novel," and in the morning to remember all your commitments, the bills, the debts, the people who rely on you. The drama of the 21st Century romantic.

I am also struggling to make Sofia Poetiki financially independent.

Give us three reasons why Sofia should become the European City of Culture in 2019.

The first is that Sofia is a capital city: it is a real metropolis by Bulgarian standards, a city of contrasts where incompatible cultures meet. Sofia is a symbol of the "glocal," that interaction between global and local, and all cultural processes flow from this. The idea of making a city a Culture Capital is linked to these processes. There are marvellous Bulgarian cities also applying for this, but they are too stuck in the "local" to qualify. This, however, is not a flaw – I admire these cases of certain traditionalism and constructive conservatism. But Sofia is the only place in Bulgaria where the contrast between tradition and modernity is so evident.

My second reason is purely quantitative – the greater part of the cultural product of Bulgaria is created in Sofia.

My third reason is that Sofia is my city, isn't it?