French Ambassador Xavier Lapeyre de Cabanes on a country without dissidents, the importance of press freedom and why you shouldn't talk with extremists

I had come to the French Embassy on Oborishte Street in Central Sofia armed with a little French dictionary which, I hoped, would come to rescue when I ran out of my (very) limited French vocabulary. I never had to reach for it. Xavier Lapeyre de Cabanes, the French ambassador welcomed me with some Perrier water and spoke almost perfect Bulgarian. I mean perfect, sans accent. I have a very good teacher, M. Cabanes said offhandedly, referring to his work in Bulgaria as a press attache, in 1991-1995 – a spell in a former Communist country that perhaps produced the biggest change in his personal life: his wife.

The Cabanes moved on. Cyprus and Djibouti were followed by Brazil and various positions in Paris, leading back to Bulgaria and his first ambassadorial appointment. Looking back through a quarter of a century of history, obviously, provides ample fodder for thought and rumination, which Xavier Lapeyre de Cabanes gladly grabs.

We were in the opposed camps then, now we are all in the same union. The EU is not just a common market, but a common cause. This cause is based on the idea of democracy. The first requirement for a country to join the EU is that it is a democracy. Naturally, there is no perfect democracy anywhere in the world. There are always problems. Sometimes those who have the political and economic power do not like to have opponents. This is always a risk for democracy and civil liberties. In the EU everyone must be worried if a country strays away from democracy. I am not saying this is what happens in Bulgaria now, but this is why we have an interest in the development of Bulgarian democracy.

Look at the results of the EU elections in May. They were much worse in France than they were in Bulgaria.

What does good results and bad results mean?

In France, 25 percent of the French voters supported a party that is opposed to the EU and is inherently undemocratic. They are populists, and they are dangerous populists. In Bulgaria, the party that opposes European unification failed. This is an indication that Bulgarians do not like the sort of speech and ideologies that are undemocratic, anti-European and Russophile.

You were here in 1991. Can you name three things that changed radically since then?

Now we live in the same world. Young Bulgarians and the young French are educated in the same mode. The people belonging to my generation in Bulgaria did not get the same education as myself as they grew up in a system where they could not read the books they wanted, or listen to the music they liked, or watch the films they wanted to see, or travel to the countries they wanted to visit. They did not live in a free country.

This is not the case any longer. My children and the Bulgarian kids now have the same opportunities. They live in an open Europe, in an open world. This, I think, is the greatest difference. It is perhaps not very obvious, but it is very impressive. When I meet young Bulgarians at the universities and the French language schools in the country I discover that in our talks there is something that was not in the talks with my Bulgarian friends 25 years ago. Young people in Bulgaria and in France now have the same interests and the same preoccupations.

Second, Bulgaria is a lot more developed economically now than it was previously. At the beginning of the 21st Century Bulgaria's GDP was a third of the median EU. Now, it's a half, a significant increase. Of course, I am not going to tell you there is no difference between Sofia and Paris. Yet, in Sofia you can live quite decently. There are no longer electricity shortages, the transport system is efficient.

Not all changes are for the better, however. Now, when I travel through Bulgaria, I see many villages – in fact whole regions of the country – that are in ruins. It's like a desert really. Whole villages have been abandoned. Houses are empty and crumbling to pieces, the land stays derelict. Some areas in the country are a lot richer than they used to be. But many regions, especially in the hills, are poorer. They look as if they have no future. 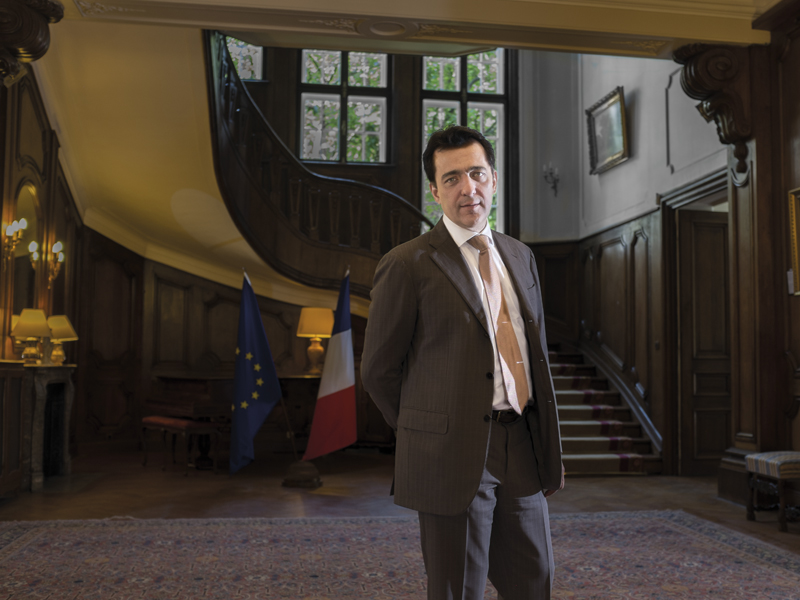 Do you have an explanation for this?

In Bulgaria in the early 1990s there were about 9 million people. Now there are 2 million fewer. Probably a million and a half live abroad. The birth rate has decreased. This is probably Bulgaria's biggest problem.

Bulgarians are reasonable when it comes to foreign policy. I was impressed by that 25 years ago as well. The Bulgarian transition to democracy was not very successful in terms of domestic development. But especially in the 1990s Bulgaria showed a lot of common sense. In that decade Bulgaria was on the outskirts of a war zone. In the 2000s that common sense foreign policy continued – and it continues now, which is very important for Europe's stability.

Another thing that has remained unchanged, sadly, is that there is still a large part of the population that remains on the fringes of mainstream society. I am of course referring to the Gypsies. I have visited a few areas overwhelmingly populated by Gypsies. It is clear that these people do not live in the same country. Their children do not go to school.

Then there is the overall lack of faith in the development of the country. There is pessimism, and everyone can see that. This is why many young people want to leave.

What is the reason?

The reasons is the failed domestic policies.

In spite of the fact that GDP has increased and we are now able to read the same books and watch the same films?

Yes. Bulgarians are very disappointed with their elected politicians.

So, in spite of the increased GDP and the fact that we are now able to read the same books and watch the same films most international human rights watchdogs put Bulgaria at the rock bottom in anything from freedom of speech to life expectancy in the EU...

These incessant assessments are sometimes a little painful. It seems that we are all paying homage to a contemporary fashion in always trying to measure everything. Furthermore, it is definitely tiring and unhelpful to always find yourself at the bottom of the rankings. But I still believe that an assessment carried out year after year with the same criteria provides useful information, at least on the evolutions. This said, it is only an instrument.

Let me rephrase the question. Several years ago a bomb went off in front of the editorial offices of a Sofia newspaper. The investigation has failed to make any meaningful revelations. Significantly, the prime minister at the time commented that the editors had plantеd the bomb themselves in order to attract the attention of the public and boost their newspaper's sales.

I haven't said that there is no problem with freedom of speech in Bulgaria. When there is a bomb or when the car of a journalist is set on fire twice in less than half an a year, what does the government do? Is anyone indicted? If nothing happens, it means that something has gone very wrong. Second, when politicians think they have the right to phone journalists and tell them what to do means that neither the politicians, nor the journalists understand the very concept of freedom of speech.

Is there nostalgia for Communism in Bulgaria?

When I arrived here in 2013 I met with a Bulgarian, a man in a senior position, who told me – look at Kremikovtsi, it was a huge plant which worked well for many years. Now it is in ruins. This was a man who did not understand that it is not enough to produce. You need to sell as well. Yes – there is nostalgia, and this is human. If you've lived for 50 years in a system that had full control over your life and that used the same words as we did in the West – democracy, urbanisation, economic development, but without putting any real meaning in these words, it is impossible to readjust just like that.

As a diplomat, presumably, you are talking with all political parties in the Bulgarian parliament?

No. I am not talking with Ataka.

Why?
Is it not obvious? I hear what Ataka want, I read what their leader says, I know he started his election campaign in Moscow. I am aware of his ideas. Furthermore, their leader started a fight against a French embassy employee in an airplane.

Do you have an optimistic theory for Bulgaria?

I have been observing Bulgaria for 25 years. So many things have changed for the better that I am an optimist.

Can you be more specific?

I think the best indication that Bulgaria has become a better place to live in will come when those, who have emigrated, start returning.

Do you have a pessimistic theory?

By nature I am an optimist.

Read 4991 times Last modified on Tuesday, 28 June 2016 15:27
Published in Bulgaria Interviews
More in this category: « STEPHANE MOISSET TOGETHER WE CAN »