interview and photography by Anthony Georgieff
Rate this item
(4 votes)

Geneva-born London School of Economics-educated banker Martin Zaimov has been a household name in Bulgarian banking and political circles since the beginning of the democratisation process in the early 1990s. Zaimov was deputy commerce and trade minister in one of the caretaker governments at the time, and in the period 1997-2003 serves as deputy governor of the Bulgarian National Bank. In this capacity he supervised the implementation of the Bulgarian Currency Board, which most economic analysts agree is the single most important economic device Bulgaria introduced in the wake of its 1996-1997 hyperinflation and banking collapse. At the present time he chairs the supervisory board of the French-owned Society Generale Expressbank.

The first thing I note as we sit down in his spacious office at Aleksandar Stamboliyski Boulevard in Central Sofia is Martin Zaimov's beaming optimism at a time of a severe political crisis where the outcome, it seems, will be more difficult than ever before in Bulgaria's short flirt with democracy. I am tempted to start talking politics, as Zaimov has also made a name for himself as a local politician, but I decide to focus on banking and finance exclusively. After all, what brought me here in the first place is the collapse of a major Bulgarian bank in June and the run on another both events fed fears that an overall banking crisis was imminent.

Banks in regular countries reflect the economy and the general state of society. Banks to a very limited extent have a proactive role in the economy and in life in general. On the other hand, they are a very good reflection of what society is. So, what is happening in the Bulgarian banking sector mirrors what is happening in Bulgarian society. The Corporate Commercial Bank and a number of other banks reflect what I consider to be a relatively small part of the Bulgarian economy. In a broader sense, there is an ongoing transformation not only in Bulgaria of the way things are done. In the case of Bulgaria, this is also a reflection of the slow phasing out of the former Communist regime.

Is banking in Bulgaria safe at the moment?

But one big bank went into supervision, there was a major run on another...

Banking in general, referring to all banks, is pretty safe. The fact that the Corporate Commercial Bank has difficulties at the moment does not mean that all other banks are related. It could be the case, but it isn't.

In life, and in the economy in particular, there are entities that fail. In this case there is this bank that obviously has difficulties. It might recover, but it will probably be quite difficult for it to do so.

For various reasons Bulgarians have become rather wary in the past 20-25 years. Add to that their "traditional" frugality and sensibility and it will not be difficult to see that many citizens are drawing comparisons with the situation in the late 1990s when many banks went bust, they lost their savings and some cunning individuals made fortunes by taking an advantage of hyperinflation.

One is tempted to compare the two periods simply because banks are concerned. In actual fact, however, today's banks in Bulgaria and the whole banking system have very, very little in common with the mid-1990s. Most of the banking system in the 1990s was owned by the government. Most of its customers were bankrupt government companies. Today, most banks are owned by well-known, reputable shareholders, many of which are major European banking groups. Those banking groups stand behind their subsidiaries in Bulgaria.

Banks can't exist on their own. They rely on their customers. The Bulgarian economy today is, to put it mildly, well functioning. There are some parts that are an inheritance from the past and they are not necessarily transparent and very effective. But the economy as a whole is working. Evidence to that is the constant rise of Bulgarian exports. Bulgaria's economy is competitive with respect to world economy. We have relatively low-level unemployment, constantly emerging new companies. Investment has plummeted, but that's not the case only in Bulgaria.

The economy is strong, and banks now are in a very strong position compared to 15 years ago when the economy was in actual fact bankrupt. In 1996 Bulgaria's government was on the brink of bankruptcy while now it is one of the least indebted in Europe. The government can borrow billions at relatively low cost and thus has the capacity to cover any bank failure.

Banks now have a completely different regulatory framework. Now one could question the diligence of the regulator vis-a-vis the Corporate Commercial Bank. However, the rules are the most advanced European rules.

I really don't think there is any room for comparison.

OK, but how would you explain the run on the First Investment Bank when customers flocked to its branches one Friday last month and withdrew as much as 800 million leva in one day?

I suppose there was a temporary loss of confidence. The truth is most other banks provided 1.2 billion leva liquidity funding through the government to the First Investment Bank. So, the banking community was pretty supportive. We also saw that two or three days later it was all calm back to normal and the bank is expected to reimburse the borrowed funds by the end of November.

Some people draw parallels between the Corporate Commercial Bank and the First Investment Bank. People might have felt that the FIB was less transparent than other banks. It's hard to say. You see, there is a huge difference between a temporary liquidity problem and a fundamental insolvency issue where many of the borrowers are not good and therefore they make the bank not good and therefore the depositors risk the money they have deposited.

The fact is that the First Investment Bank was up and running pretty quickly. The parallel with the Corporate Commercial Bank ends here.

I am very, very confident about most banks in Bulgaria.

In a functioning economy there will always be some banks that are stronger than others. And there is nothing odd in some banks becoming less solvent or insolvent.

Corporate Bank is a reminiscence of the crookedness of our recent past. We started in 1990 from a very low starting point in terms of business culture, political culture, the economy, the habits and the overall state of the country. Bulgaria was very isolated geographically. More than 80 percent of the country's exports went to the former Soviet Union. We started with an economy, especially industry, that was planned and created entirely during the Communist era. We had no tradition of competitiveness. The way the previous regime handled difficulties was through heavy borrowing. In 1990 we were the most indebted country in eastern Europe and the government promptly declared insolvency which took four years to resolve. For 10 years there was practically no investment whatsoever in the country.

We have gone a very long way since then. Nevertheless, part of the business culture is of a different nature than the one you and I would recognise as belonging to the Western world. There are clearly corrupt practices, indecent relations with the government. In any regulated activity, in any customs and duty prone activities there are entities that tend to behave in illegal or semi-legal ways. There are excise goods passing through Bulgaria and being traded without proper taxation. Presumably, there are also bankers functioning in this way. 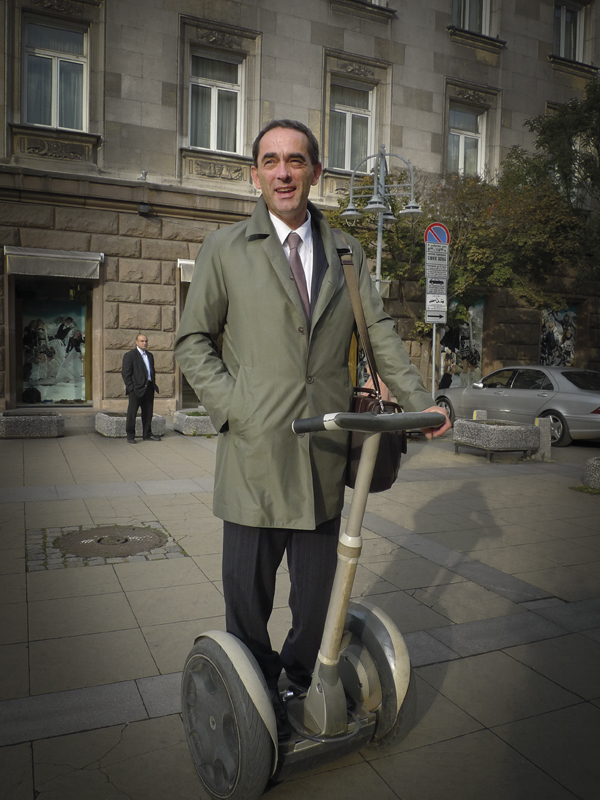 You mean the Corporate Commercial Bank was placed under supervision owing to reasons dating back 25 years?

In a way – yes. There is a long tradition of doing business in a different manner.

But what about supervision? What about the Central Bank?

In this case it seems that some leeway had been given to the Corporate Commercial Bank.

A currency board is a post-colonial system designed to emulate the currency of the former metropolitan country. It is a system that allows a country to have its own currency that emulates the currency of the stronger economy. In Europe there are even two countries that actually do not have their own currencies these are Montenegro and Kosovo. They use the euro without being a member of the EU.

We are one step away from that. We do retain the leva, but it is irrevocably fixed to the euro, originally to the D-mark.

From a macroeconomic point of view, the currency issuing bank is a related party to the European Central Bank and the leva is equivalent to the euro.

Is that good or bad for Bulgaria?

I think that the euro is very positive for many countries in southern Europe. This is what allows them to take easy debts that have turned out too large for them to sustain, I hope temporarily. It also makes easier the catching-up part that they have to do regarding the rich area of Europe, notably Germany. It is a very important macroeconomic measure that integrates the economy of Europe, particularly smaller economies like the Bulgarian.

Against the background of what happened to the Corporate Commercial Bank and what could potentially happen to other banks if there was a run on them, is there any dangers for the Currency Board?

I don't think so.

What could happen to put the Currency Board in danger?

The only way to do that would be for the Bulgarian parliament to vote the Currency Board Act out. There are several reasons why I think this is unlikely.

First of all, there is the great evolution of the Bulgarian society as a whole. Politics is lagging behind, but society has evolved a lot. The majority are not only pro-European but also democratically minded and in favour of a liberal market. Politicians even in less democratic countries than Bulgaria take into consideration public opinion. I cannot imagine any politician would want to ditch the Currency Board.

Second, I think that all businesses in Bulgaria would be strongly opposed because it would be against their interests.

Probably, there are some economic areas and businesses that would think that a weaker currency is to their benefit. They might have temporary gains, but in the long-term they will have huge losses because inflation will catch up.