Turkey's ambassador building on the past, looking to the future

Having spent a quarter of a century in the Turkish diplomatic service, including postings in Afghanistan, Italy, Pakistan, the UK and the United States, career diplomat Süleyman Gökçe arrived at the end of last year to take up his first ambassadorial position in Sofia. A graduate of International Relations at the University of Ankara, Süleyman Gökçe is experienced sufficiently to know that even though Bulgaria and Turkey are neighbours that share a common history, and are furthermore now allies in NATO and partners in the EU, just mentioning Turkey in Bulgaria is like walking on thin ice – if you do it to the wrong audience. While I am being entertained in impeccable English, I catch myself wondering what it must be like for a senior Turkish official to be confronted, on a daily basis, with the usual mixture of mistrust and outright suspicion that many Bulgarians feel towards their neighbours. But Süleyman Gökçe dispels my thoughts.

Bulgarians are generally very hospitable, embracing and welcoming. I have received positive vibes at all levels: national, local and personal. There is a huge prospect for cooperation between Turkey in Bulgaria, in terms of investment, industry, tourism and so forth. Merchants, industrialists, small and medium-sized businesses always find a way to work with each other. They have many success stories to tell.

We also want to have those success stories at the formal level, supported by the administration and the governments of the two states. The huge potential I referred to can be unleashed and utilised better at the formal level. Then, investment and trade will multiply.

Have you experienced any anti-Turkish sentiments in Bulgaria – not as a diplomat, but as a Turk?

I wouldn't say anti-Turkish, but yes – I should characterise this as perhaps a sense of unease, at least sometimes. I suppose certain things can get difficult to accomplish owing to a lack of ease, based on certain prejudices. That lack of trust stems from the long decades of the Cold War.

The feeling of unease is probably coupled with estrangement. The perception in both Turkey and Bulgaria of each other was just that, the "other," the "adversary." By definition, the adversary was profiled as "bad," if not "evil," "counterproductive" rather than trustworthy.

I first came to Bulgaria in July 1980. At that time, Bulgaria was a very different country. Hardline Communism and strictly toeing the Soviet line brought it in a league with Eastern Germany. Things have come a long way since then. Turkey was an adamant supporter of Bulgaria's bid to join NATO. In fact, Turkey made it a condition that no other country could join the Alliance before Bulgaria and Romania did.

In Bulgaria, it seems to me, there is an underlying desire to settle scores with the past. I do not mean just history, but the past, any kind of past. It can be on a personal, or on a family, or on a local or even on the national level. I suppose deep down many Bulgarians are at unease with the past. Inevitably, everything that's related to Turkey sooner or later boils down to that.

Let me put the question in a different way. Let's look at non-political issues, such as the preservation of heritage. Whenever there is an official or unofficial statement in Turkey about the need to preserve Ottoman heritage, there is always someone in Bulgaria that snaps back that Turkey wants to resurrect the Ottoman Empire.

This is of course not only untrue and misleading, but also silly. What we mean is the need to preserve our common heritage. We have a very long common history, not only with Bulgaria but with all other modern states that are now in the Balkans that were once a part of the Ottoman Empire – Greece, Macedonia, Albania, Kosovo, Bosnia and Herzegovina, Serbia, Romania, and beyond. Every common history spawns good as well as bad memories, which is perfectly normal. The important thing is to construct a fair memory. If you have lived together with someone for hundreds of years, you establish a common cultural heritage. Your present and your future are to some extent based on it.

The world in 2014 is not what it was in 1914 – or in 1814. The world we are trying to build is forward-looking, creating prosperity, wealth, mutual understanding, empathy and respect. Our common heritage not only binds us together, but provides important milestones for our common future.

One important thing I should mention here is that we are not only talking about Ottoman heritage in Bulgaria, but also about Bulgarian heritage in Turkey.

Istanbul is the place where the first independent Bulgarian Church was established, by special decree of the Sultan, in the middle of the 19th century. Until that time, the Bulgarian Church was subservient to the Greek Orthodox authority in Phanar. One of the symbols of this is the marvellous St Stephen Church on the bank of the Golden Horn. Entirely cast in iron, it has been listed as a monument of culture. The Municipality of Istanbul has spent millions of euros to renovate it. Cultural heritage adds to the beauty and enriches the scope of our common history.

Until now, the Bulgarian minority foundations had to turn to expats, or to Bulgaria, or to the local authorities in Turkey for sponsorship and financial patronage. They do not need to any more. Henceforth, they are self-sufficient and financially autonomous. We have no problems with it. On the contrary, we encourage that. Because, civil society sustaining democracy is a bottom-up practice. This is great! 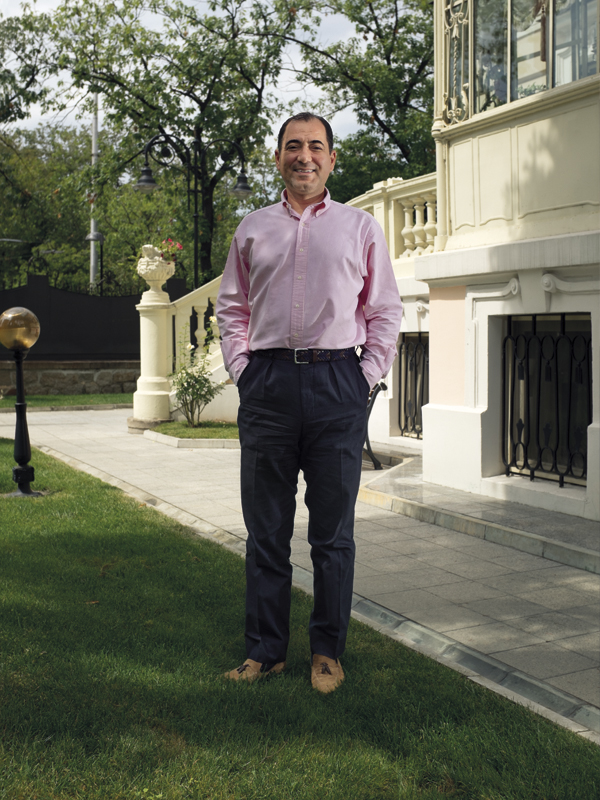 Seen through Turkish eyes, is Bulgaria any different from the other Balkan countries that were once a part of the Ottoman Empire?

I think, yes. The main reasons again stem from the Cold War. Bulgaria was in the Warsaw Pact and Turkey was in NATO. None of the other Balkan countries were as loyal to the Warsaw Pact as Bulgaria. In those days, Yugoslavia was not a member at all, Albania left in the early 1960s, and Romania was maverick. It all comes down to the prejudices accumulated in those years.

My personal response was one of amazement, though I was a part of the Bulgarian-Turkish team discussing the projected construction of the fence last year. We said to our Bulgarian counterparts that we have nothing against the fence provided it complied with the 1967 border agreement. It includes some technical specifications, like the distance to the actual borderline and that it should be entirely in Bulgarian territory, and it stipulates that any installation like this should be temporary. If the Bulgarians feel more comfortable with the fence in place, then that's fine. We are a neighbouring country, so we would love to make you happier and more secure.

The problem, however, is that Syrian and other third-country asylum-seekers in Bulgaria are about 8,000-10,000. In Turkey we have close to 1.5 million. It is obvious that there aren't hundreds of thousands of asylum-seekers in Bulgaria owing to the border security cooperation between Turkey and Bulgaria, and to the efforts of the Turkish police to prevent illegal migration into Bulgaria. One could fairly easily establish that it is the good-neighbourly cooperation, not physical barriers of any kind, that actually brings about desirable results. So, I think the "security fence" is quite unnecessary.

Bulgaria has a sizeable Turkish minority. In fact, proportionately, Bulgaria is the EU country with the largest amount of Turks living in it. In absolute terms, Germany has more, but all of the Turks in Germany are second or third generation immigrant whereas in Bulgaria they have been here for close to 600 years. Does the Turkish government have any specific policy towards them?

What issues will you prioritise during your tenure in Bulgaria?

Then, infrastructure. As you know, the world's largest airport is under construction west of Istanbul. The project will be finished in three phases, first phase by the end of 2017. By passenger numbers handled, it will be twice as large as Atlanta Airport in the United States –180 million passengers per year to be precise. This will bring huge opportunities to Bulgaria because we are immediate neighbours. Another example is the high-speed train that will connect the Caucuses to the Balkans through Turkey, being part of the 21st Century Silk Road on an axis from London to Beijing. It will come to the Bulgarian border in two years' time. It should then be obvious to all sensible minds that we should sit down and talk seriously, without any prejudice and emotional impediment, to take right decisions together, for the mutual benefit of our two countries.