There are two opposed views about the ability of wives to write biographies of their husbands. One is that they make excellent biographers because, at least in theory, they know their husbands well. The other is that they are bad – and that's because they may either eulogise or negate disproportionately.

In the case of Sonia Rouve and her book on Petar Ouvaliev – sometimes known as Pierre Rouve – none of these seem to apply, the most likely explanation being that the subject of this thickish tome was so multifaceted that he defied categorisation and generalisation. Indeed, one is inclined to think that Petar Ouvaliev was amongst the most influential intellectuals Bulgaria has ever produced. From his defection to the UK in the late 1940s to his death in 1997 Pierre Rouve led an amazing life that swung from Michelangelo Antonioni to Lyudmila Zhivkova and from Carlo Ponti to the Bulgarian Communist regime's artistic retinue as epitomised by Svetlin Rusev, the painter, and Dr Lozanov, the suggestologist.

Significantly, Sonia Rouve's book is a lot more than a portrait of her late husband. It is a story about 40 years of Bulgarian – and Western – art and history, a period that will never cease to amaze with its controversies and the people that inhabited it.

Three people in the West that you will always remember for their closeness to Petar Ouvaliev through the years?

What a choice I'll have to make! But I'll try to limit it to three. I'd like to start by thinking about "close." Petar Ouvaliev was a person who did not necessarily make friends easily or quickly, but when a bond of friendship grew, that person knew that he or she could always count on Petar. And it was the same for him: he was kind, generous and steadfast.

I've chosen to write of three people who helped him to overcome the initial cold loneliness of the exile and to encourage him to develop his diverse talents. Dr Richard Gainsborough, founding editor of Arts Review, "served art with unfailing devotion" and "helped me find new bearings in a foreign land." He offered Petar, from the late 1940s, a platform to review the best of the art exhibitions in the UK. Petar's were some of the earliest reviews of Ben Nicholson and Mark Rothko. Dr Gainsborough was a close and constant presence in Petar's life.

An equal passion of Petar's was film. He had the chance, in 1947, to study ἀlm in Paris, but was then posted to the Bulgarian Embassy in London. It was his meeting, through friends, with a fellow Slav, Anatole de Grunwald, that Petar took his first steps in the film world. Tolly was an exuberant, warm, delightful person with whom Petar spent many, many hours and days, working, talking, drinking... In 1953 Petar worked as second unit director on Innocents in Paris, starring Claire Bloom and Alastair Sim. He and Tolly were the dearest of friends.

Theatre, his early passion in Bulgaria, was not forgotten either; nor the dear, good friend who took Petar "under his wing," Jack de Leon at the "Q" theatre in Kew. Jack and his wife and daughter ran this small theatre, and Petar organised summer schools with students and put on performances which were said to be "nothing short of professional."

Film, in particular, later led to work and close relationships with Carlo Ponti, his business partner, and with Michelangelo Antonioni, for whom Petar was executive producer on Blow Up, the iconic 1960s ἀlm.

Perhaps it would not be too bold of me to add myself: a partner, friend and wife for nearly 40 years.

Three people in Bulgaria that you will always remember for their closeness to Petar Ouvaliev through the years?

I think of this in the same way, "close," over the years. From his very earliest days Petar, a "sociable animal," took part and organised lots of activities: he attended summer camps, directed student performances and attended soirees.

As I am writing about Bulgarians, it is through my eyes that I see his closeness to three families. This closeness was evident in correspondence, when they were able to visit England and when we visited Bulgaria. First, Karl and Lina Ognyanov; he a gynaecologist, she an agronomist. They both attended the American College and were childhood sweethearts. They were also friends since student days with Petar. No reason – they were scientists, he was in the arts – other than their deep and lasting affection for each other that kept the three in touch. This relationship continued for me in that, as Lina had no children and my mother had died, she became Mamche, or Mummy, for me, and she would write to me as Sonche-baby.

A second, perhaps an equally unlikely, family were Vanyo and Jeannie Rumenov; he an oncologist, she a paediatrician. Again, friends since student days, Petar kept in touch with them over the years. Both Vanyo and Jeannie visited us in London, and in Sofia we would spend many happy hours with them in their house near the Russian Monument. After both Lina and Jeannie were widowed, we three ladies enjoyed many outings together, and I am happy still to be in contact with Vladi Rumenov, whom I've known since he was 12.

A third family, and here Petar was to learn much – about music – were the Hadzhimishevs. Petar always said that his early music education owed much to Misho, director of the National Opera, and his wife, Ani. We had the pleasure of many visits to Glyndebourne with them, often with their son, Ivo. Again the closeness continues, as I consider his family to be my close friends.

If I could squeeze in a fourth, it would be Petar's continued closeness to the writer Nikolay Haytov. With him and his wife, Jenny Bozhilova, so many hours were spent in sparkling conversation.

All through these years in England, was Petar Ouvaliev a political person?

Petar was known, above all, as a humanist, an intellectual. Insofar as politics was concerned, it might be interesting to note that both he and I always voted Lib-Dem in the UK – a small party but with noble aims; unfortunately never the winners. Political, perhaps, in the broadest sense of striving, via his BBC broadcasts on cultural – never political! – topics, to build a bridge to Bulgaria and in the sense of wanting what was best for Bulgaria. He was quoted in Literaturen Front, or Literary Front, in January 1967 as "the broadcaster who is building a bridge of friendship." 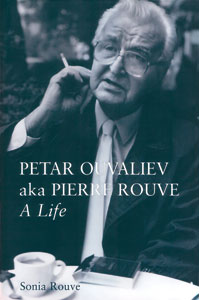 In retrospect, how would you explain his close relationship with Lyudmila Zhivkova?

With Lyudmila Zhivkova it was not a specifically close relationship. It was a friendship, respect for a serious young academic who, working at Oxford in the 1970s, became aware of the possibility – and the need – for her country to be better known and appreciated in the West. In this, and in many ways – meetings with museum directors, publishers – Petar was able to assist. One could say that their joint aim was to promote Bulgarian culture. Two spectacular events crowned these efforts: the ᴀracian exhibition at the British Museum in 1976, when Lyudmila Zhivkova was minister for art and culture, and Bulgarian Icons at the Courtauld in 1978.

What happened when Petar and you learnt of her death?

Petar and I were on holiday in Austria in 1981 and, as anyone would be, we were shocked to learn of her death at so early an age and, it could be said, at the height of her cultural ministry.

Did anything in Bulgaria and in your lives change after that?

Many things may have changed in Bulgaria.The country had just celebrated 1,300 years of the founding of the Bulgarian state and perhaps, with the driving spirit gone, fewer cultural events took place. For us, we regretted the loss of a strong cultural force and a good friend.

Was Lyudmila a positive figure for Bulgaria?

I think that all I've said goes to show that I – and I'm sure I am not alone – believe that Lyudmila Zhivkova worked hard to promote Bulgaria's image, especially abroad.

Three places in Bulgaria that you will always associate with Petar Ouvaliev? If you were to recommend them to a friend, how would you describe them?

The key places in Bulgaria for Petar were his place of birth, Sofia, and his college days in Plovdiv. In Sofia he always spoke of the house on Karnigradska Street, with the big garden and even a cow, where he spent his childhood.

I have brought several groups to visit, and I would always suggest not only the known monuments and churches, but simply to walk around and look at the exquisite urban architecture, mostly sadly dilapidated, and buildings from the 1920s.

Plovdiv and the French College marked an important time for Petar; his perfect French and interest in philosophy all stem from those days. The college is now part of Plovdiv University. Plovdiv itself was City of Culture and again I'd say: just stroll in the Old Town.

On Petar's first visit back to Bulgaria he was invited to an evening of poetry, music and art at the Ethnographic Museum and also visited studios of artist friends.

Petar loved the mountains more than seaside, so I'd have to recommend visiting the Rhodope. Marvellous scenery, pure air and wild nature.

Petar Ouvaliev, aka Pierre Rouve, A Life by Sonia Rouve was published by Mailer Press, 50 Comeragh Rd, London, and can be bought in Bulgaria at Nissim Books on 59 Vasil Levski Blvd, Soᴀa, or on www.nissimbooks.com.

Read 14780 times Last modified on Wednesday, 10 July 2013 12:57
Published in Bulgaria Interviews
More in this category: « THE PAST OF OTHERS DYANA DAFOVA »