Sarah Riley first joined the British Embassy in Sofia in September 2014 as deputy head of mission. Since January 2015 she has managed the embassy as chargé d'affaires – while trying to take in as much as possible from Bulgaria's culture, sites and entertainment. With some solid experience in Eastern Europe – in Warsaw, where she was posted in 2004-2008, and in Brussels, where she was in charge of Eastern Europe, South Caucuses and Central Asia at the UK Permanent Representation to the EU – Sarah is looking forward to the many challenges a sojourn in a country like Bulgaria is bound to entail. It all starts almost as we speak in the spacious halls of the British Residence on Vasil Levski Boulevard: the "great mega mission" of about 60 British entrepreneurs and decisionmakers, the largest ever such delegation, will spend two days in Bulgaria, at the beginning of March, seeking out common opportunities with local businesses and dignitaries. But before we focus on the "cautious optimism" ahead of that event, let's talk a bit about the country Sarah will be spending four years of her life in.

I'd been south of Bulgaria and I'd been west of Bulgaria, but I had never been to Bulgaria itself before I came here, and I must admit I didn't know very much about the country. When I got the job, my Dad told me he'd been to Bulgaria on a business trip in the 1980s. That happened in the month of January – and most of what he remembered is how much snow there was in the streets. Of course, he remembered the classic model of how business meetings were conducted at that time. There was always someone from a ministry present at the talks he was supposed to hold with local business people. I am sure he is looking forward to coming back to see me and find out how things have changed 30-something years later.

Obviously, there are things that you are also looking forward to.

Everything... It's a great job and a great place. On the professional side of things there is a lot we can do with Bulgaria. Our relations are that of good partners as we are both in the EU and NATO. Our main priorities at the embassy is promoting judicial reform and stopping organised crime. These will benefit both British businesses and British visitors coming to Bulgaria, but first and foremost Bulgaria itself. We also offer full consular services to Britons who are already in Bulgaria both shortand long-term.

On a more personal level, I am really eager to go out and about, especially in the countryside. Bulgaria really has everything: a sea, mountains, culture, ancient monuments, sports... Sadly, I haven't done any hiking yet, so that will be one of my main priorities in the very near future.

One of the things I really like is the fact that every day I can see Mount Vitosha from my office window. That's really a pleasure and I don't think I'll ever get bored with it.

I also love the bit where you can walk from a church to a mosque and then to the synagogue, and end up your tour at the mineral baths. It is an amazing building, with all its beautiful wall tiles, and I think it will be a great cultural venue when it's finished.

I have also done some travelling around the country: Varna, Blagoevgrad, Pazardzhik and most recently Chepelare and Pamporovo.

My personal ambition is to fill in at least 75 of the 100 National Sites booklet that I have! I am going to try for the silver medal...

Are there anything that you are cautious about?

Once you spend some time with a local family, which is what I did last year in Plovdiv, you start realising how good Bulgarians are in their day-to-day attitudes. Interpersonal links are very strong here and that's really what turns the wheel on a daily basis.

OK, many people have complained about the Sofia traffic, but believe me – it is better than in Warsaw and in Brussels. 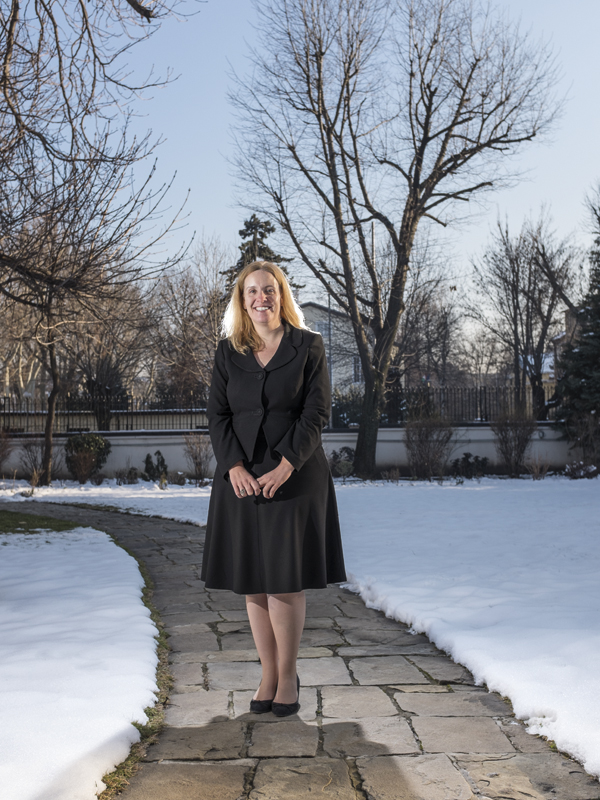 If you have a group of friends visiting from the UK, what would you advise them to do?

I would tell them to spend at least a weekend in Sofia, looking at the sites and visiting some nice restaurants and cafés. Then I would tell them to go round Bulgaria, diverting away from the beaten track as much as possible. Bulgaria has a number of obvious places of interest, like Rila Monastery and the Black Sea coast, but it also holds many lesser known but equally intriguing sites that are well worth exploring.

Bulgaria is perfect for observing local customs, many of which we do not have in the UK. I can name Baba Marta on 1 March and Alphabet Day on 24 May. I particularly like 15 September, the celebration of the opening of the new school year.

Recently, we had a group of Roma children who came to the embassy to teach us about survakane, the charming custom of tapping peoples' backs with wooden sticks decorated with festoons and popcorn. This takes place around Christmas and the New Year, and it is really amazing.

I cannot help but emphasise the food. I am vegetarian, and Bulgaria has plenty to offer in that direction. It's got superb tomatoes and cucumbers and peppers and cheese and eggs. I just love my mish-mash.

And what would you advise them to be careful about?

Beware of your surroundings, but that's nothing specific about Bulgaria. It's common sense for everyone visiting a foreign country.

If a British businessman came here seeking to start a business, what would be your initial advice.

I can't emphasise strongly enough the importance of personal ties in Bulgaria. People should come here and meet their prospective partners face to face. In Bulgaria, meetings are much more effective than impersonal emails. Bulgaria has an awful lot of strengths and I am proud to say that the UK has been the fourth largest investor in the past 10 years. Bulgaria is in the EU and belongs to the single market. The workforce is well qualified and relatively cheap. Taxes are low. There is lots to recommend.

Of course, you can't deny that there are problems with the rule of law. These are problems not only for individuals but also for businesses. Businesses need to know that they can rely on the judicial system to enforce a contract and so on. That's exactly why we are working closely with the Bulgarian government to raise these issues and find solutions.

A word to the expat community. What do you have to say to the thousands of Britons living in Bulgaria either short or long term?

My impression is that the vast majority of British expats in Bulgaria are well integrated in their local communities, neighbours and friends. When we hear of complaints they tend to be about the authorities and the bureaucracy. We send out the simple reminder that you are not at home and things are done differently in different countries. Obviously, we provide the usual consular services to anyone who gets in trouble. These include, but are not limited to, emergency travel documents, an updated travel advisory page and so on. Bad things can happen to anyone in any country. That's why we work closely with the Bulgarian authorities to solve any issue that may arise involving a British citizen and that he or she gets appropriate care and services.