THE PAST OF OTHERS 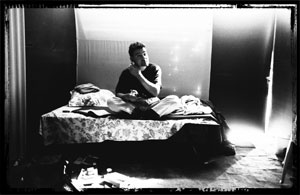 Iliya Troyanov is a man of many faces, languages and passports. After his parents fled Communist Bulgaria and settled in Western Europe in 1971, he spent most of his childhood in Germany and Kenya. He is, in the noble tradition of Bruce Chatwin, a nomad for our times whose life's mission is to explore the meaning of adventure, identity, hybridity and home. He has travelled widely and lived in India during the ᴀve-year research for The Collector of Worlds, his imaginative tour de force on the life and times of Richard Francis Burton, the 19 Century British explorer of Africa and Asia. In Mumbai to Mecca he undertook a journey to Islam's holiest sites. Troyanov's writing is a colourful celebration of cultural diversity and exchange. "As long as we see our fellow men simply as other people, we will not stop hurting them," an Indian sadhu says to Burton in The Collector of Worlds. All of Troyanov's stories, ᴀction and non-ᴀction are shot through with a humanist concern and a yearning to show us humans in what surrounds us.

Your latest book in English is the novel The Collector of Worlds, a fictionalised life of the eccentric 19th Century explorer Richard Burton. It has been hailed, commonplace as this may sound, as a book for our times. Is it, and why?

The success this book had in Germany and the fact that it is being translated into 20 languages would suggest that. In our times, in most developed industrial societies there is both a growing curiosity for the world and a narrowing of the mind. This process is spurned by an increasingly shrill propaganda of intimidation in the media and in politics. These are the themes of my novel, so I guess a book that tries to reflect on the human relationship to the Other and the many conflicts and confluences in-between is a very contemporary book.

Do you see yourself as a 21st Century Burton who makes connections between the East and the West?

Is Bulgaria East or West?

In the last 130 years Bulgarians have comfortably neglected 500 years of their history, the Ottoman rule. However, 500 years, whether we like it or not, have left a profound mark on our mentality and our culture, and not all of it can be bad; otherwise, we would have to be destroyed by self-hatred. The concept of an alien occupation that remained alien for such a long time is preposterous. There is an ongoing process of cultural amalgamation in such cases, and this can be seen everywhere in the world. For example, there is a letter by the Vizier in Constantinople telling the Ottoman authorities in Bulgaria to stop allowing too many people to convert to Islam, for there would soon be no one left to pay taxes. And in the period before the Ottoman rule, Bulgarians were not free – they were subjects of various feudal polities that were hardly on their way to Enlightenment. Also, the early Christian Church was a far cry from the great pre-Renaissance that the state-controlled Bulgarian research in Communist times, eager for nationalistic recognition, made it out to be. Bulgaria is a country at a crossroads, and it had better play a role of communicator and bridge rather than mouth empty phrases of being Europe's last bastion.

In 2008 Dog Times was published, and The World is Big was released in Bulgaria. Both explore the painful recent past of Cold War and post-Cold War Bulgaria. Do you think the time has come when Bulgarians can begin to safely experience a collective catharsis? How can this process heal the wounds of today's society?

The situation in Bulgaria is the worst in all the countries of the former Eastern Bloc, which is proof that Bulgaria is still thoroughly controlled by the old Communist Establishment that has transformed itself into an oligarchy and mafia. The critical assessment of the past is a litmus test for the democratisation of a former dictatorship – in Bulgaria, politicians and media have done all that could have been done to keep the Communist-era archives closed, to prevent the prosecution of the people responsible for crimes, such as crimes against humanity, rape and torture. You cannot experience catharsis without the truth being brought out into the open and without indictments. Whether there is forgiveness or not is only for the victims to decide, and in this respect what happened in South Africa at the Truth and Reconciliation Commission is a telling example.

In Germany there has been a wave of bitter-sweet films about the Socialist era, such as Goodbye Lenin and The Lives of Others. Is there a general post-Cold War Vergangenheitsbewältigung, or coming to terms with the past, going on in Europe?

Both films are rather naïve, and give totalitarian society a charming and even comfy feel. So, in some respects, they include an apologia for the past. When you keep in mind how inhuman the system was and how devastating the consequences have proved to be, the amount of research and art produced across Eastern Europe so far is minimal. This is proof that as much as things appear to have changed in the East, they have remained the same.

In Dog Times, you describe the little town of Lukovit as living in the past and starving in the present. What does the future hold for such towns?

According to the National Statistics Institute, they are thriving. In reality they are dying an ugly death.

In The Collector of Worlds, a sadhu says to Burton: "As long as we see our fellow men simply as other people, we will not stop hurting them." Is Bulgarian society particularly guilty of inhumanity? Does Bulgaria have a civil society yet?

Today's society doesn't seem to be more humane than yesterday's society, but all this is the doing of the former Communist Establishment and their progeny, who have occupied every public position and grabbed all wealth. How is a civil society possible in such a state?

There is an attempt in all your work to cast a cosmopolitan light over dark and obscure corners of the world and history. What has been the most diffcult book for you so far?

It is the one I am currently writing, the story of an apparatchik and a dissident in Communist Bulgaria. It is very diffcult to narrate from the perspective of a person you would normally detest but as an author have to empathise with.

Your cosmopolitan themes are reflected in your roaming lifestyle. Do you describe yourself as a citizen of the world, a global soul or something entirely better?

I do have a permanent home now, and I am very happy with it and with living in it. I don't think there is such a thing as cultural identity – identity is what remains the same, and true culture is perpetually in motion.

You currently live in Vienna, a city haunted by its Nazi past even more than Berlin. Is there anything that bothers you in modern Austrian society? Have they done their homework of Vergangenheitsbewältigung?

I don't think Vienna is haunted by its Nazi past more than Berlin is. Vienna was spared many of the ravages of the war, and many Austrians have refused to take any responsibility. Authors have done their fair bit, but a tendency towards exclusive and authoritarian concepts is evident even today, the results of the latest elections being a point in hand.

You have written extensively on Asia and Europe. What about Africa where you spent part of your childhood?

I have written several books on Africa, but they are not translated. I am currently writing a play, Renaissance Timbuktu, which intertwines the journeys of a Moslem and a Jew expelled from Spain in 1492, and the flight of a contemporary African to Europe.

What is the book you dream of writing?

Whenever I dream of a book, I end up writing it, for if it appears in my dreams, it is solid enough.

Iliya Troyanov is a household name in the German-speaking world. He has received a number of major literary awards, among them the Prize of the Leipzig Book Fair and the Berliner Literaturpreis.

Dog Times; The Fake Revolution of 1989, a chronicle of the 1990s Transition in Bulgaria, was published in Germany in 1999 but came out in Bulgaria only in 2008. Its release coincided with the premiere at Sofia Film Festival of The World is Big and Salvation Lurks around the Corner, an award-winning European production directed by Stefan Komandarev, based on Troyanov's eponymous novel about a Bulgarian family in the 1970s who escape to the West. Of his numerous books, The Collector of Worlds, Mumbai to Mecca and Along the Ganges are available in English. Two more books will be out in Bulgaria in 2009: Confluences and Nomad on Four Continents.