Young, pretty and opinionated - Alexandra, Violeta and Elen are the stars of Bulgaria's newest feature film

"Anybody in my place would have made a great movie with these actresses," says director Lyudmil Todorov. Well, this is Seamstresses, and the actresses are Alexandra Surchadzhieva, Violeta Markovska and Elen Koleva. All three are in their early 20s, like the film's characters - small-town girls heading to Sofia, lured by a job advertisement for... seamstresses. Predictably, the advert turns out to be a hoax.

When they were chosen for the roles of Dora, Katya and Elena two years ago (200 girls auditioned), they were even younger. Violeta (Katya in the film) was still at school and Alexandra (Dora) and Elen (Elena) were students at the National Academy of Theatre and Film Arts, the NATFIZ. None of them was completely unknown to Bulgarian audiences. While their heroines from Seamstresses were looking for their place in the big city - and found it in one way or another - the actresses apparently found their place in Bulgarian cinema.

Alexandra has the most experience. She was born in 1984 and her parents are two of the most famous Bulgarian performing artists, Pepa Nikolova and Yosif Surchadzhiev. Her debut in cinema was at the age of two. Subsequently, she acted in Vercingetorix, a co-production starring Christopher Lambert, the Russian film Turkish Gambit, the short feature Waltzes and Tangos from the Village of Bela Voda and the full-length features Vampires, Goblins; Icy Dream; Blueberry Hill and Things of Ultimate Importance. She graduated in acting from NATFIZ in 2006 and began work in the Bulgarian Army Theatre afterwards. Her latest role there is as Nina Zarechnaya in Chekhov's Seagull. However, Alexandra is better known for her appearance on television. For five years she was one of the hosts of a young people's show on Bulgarian National Television.

"Glory lasts only an instant, then you go on proving yourself," Alexandra said after the premiere of Seamstresses, which was hugely successful. "I try not to get a swollen head, because this is the worst thing that can happen to anybody - to believe in your greatness. This is the moment you begin falling down headfirst. I know from my mother that you shouldn't take yourself too seriously." Sadly, Pepa Nikolova did not live to see her daughter's success. She died a year ago. 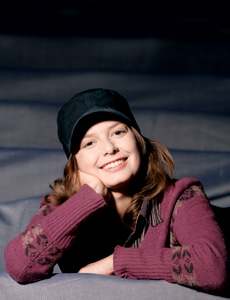 For Alexandra, who defines Seamstresses as a story about the skill of forgiveness and the meaning of friendship, her relatives and friends are important in real life too. "Even if you were the richest and the best-known person on earth, what would you do with your wealth and fame if you could not share them? A man does not live with objects. I learned over the past year that you can endure anything as long as you are not alone. When my mother died, I promised myself to continue and be as strong as her. But I couldn't have done it without the people around me."

The girls from Seamstresses arrive in Sofia to seek the happiness they can't find in the small provincial town of Popovo. Yet Alexandra would not emigrate. "Most people believe that they will immediately find a good job and a better life once they go abroad. I don't think this is true. You are nobody there - you are isolated and have to cope with difficulties alone." Travelling around the world is, however, one of the greatest experiences for Alexandra. After Paris and Vienna, she likes Belgrade the best, and she also plans to visit India and Egypt.

What, in her view, do foreigners living in Bulgaria see in the country? Pepa Nikolova was known for her sharp tongue and Alexandra does take after her: "Poor things, they come to a country without a single normal law and the laws that do exist are ignored!"

Though she is fairly well known, Alexandra has not allowed her Bulgarian stardom to go to her head. After finishing the Turkish Gambit, she made a ruthless comparison: "I met terrific professionals and incredible people, who are completely down to earth. In Bulgaria, it is only the most incompetent who think of themselves as stars."

Are there roles she dreams of? "I have never wanted anything at any cost. I had a great chance and I was lucky to be noticed and appreciated by great directors, which motivates me to work and to prove myself."

Violeta Markovska has had a similar fate. "I have won all my roles at castings," she says. She first attended an audition when she was only 11. "I'd dreamt of being on stage, of being in the limelight since childhood." Violeta also enjoys a strong relationship with her mother. "She was an assistant movie director for many years and taught me some of the tricks of the trade."

Violeta is only a second-year student at NATFIZ, but people already stop her in the street. They recognise her, but not normally because of her role in Michael Corry Davis' Svetlana's Journey, which won her the Best Actress in a Short Film Award at the Hollywood Film Fest in 2005. The reason is again television. Violeta acted the main role in the first Bulgarian soap series, The Bulgaria Hotel, and is the face of Fanny Fashion. Her CV also includes parts in American productions, filmed in Bulgaria, but not particularly popular: Copperhead; Undisputed II: Last Man Standing; Nature Unleashed: Avalanche; Shark Zone; Octopus 2: River of Fear; Disaster, and For the Cause. She made her theatrical debut while still in secondary school, when she acted on the National Theatre's stage. 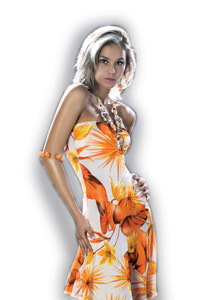 Does her experience make her different from her fellow students?
"It gives me some confidence, but I still have to prove myself," she replies.

Violeta learns something about herself from each new role. "I learned from Katya that if people have a fighting spirit, they'll manage - whatever the circumstances." She is still very young, however, and she still has many unfulfilled ambitions. "I'd very much like to play a mad woman, like Gwyneth Paltrow's character in A Perfect Murder or Glenn Close's in Fatal Attraction. I feel I can do it, I want to express innermost emotions, even inhabit such a role for some time, go in a mental hospital or a prison - extreme experiences, that is," she says. Otherwise, she looks very fragile.

Would you work abroad? "Nothing is impossible. But a person must be aware that he\'ll have to start from scratch, that he'll confront many difficulties and he won't be able to use his connections, like people in Bulgaria do."

What has she learnt from her work in foreign productions? "American colleagues are great. They are very supportive and tolerant," she says.

Cinema is not her only passion. In fact, she is presently obsessed by a woman named Blanche. This is the role Violeta plays in A Streetcar Named Desire, staged at the Students' Theatre of NATFIZ. Besides, she occasionally dreams of being a television presenter.

"I can't agree with those who say that when you are dealing with many things simultaneously, nothing good comes out in the end. I want to work in theatre, in cinema and in television too. For many people, television is not high art, but for me, it's a productive activity."

Elen Koleva will agree. The Bulgarians know her big blue eyes from an M-Tel commercial where she unsuccessfully tries to recall the name of the boy who is declaring his love to her. She has also acted in the Church for the Wolves TV series and The Last of the Girl-Shepherds; Day and Night and A Look in the Eye features, but Seamstresses is her true debut.

Elen was born 23 years ago in Montana and grew up in a theatrical family. When only five, she stated that she would continue the family business. She graduated from NATFIZ this year and is currently acting in Harold Pinter's Old Times at the Sfumato Theatre. But her face seems destined for the screen. "Besides talent, there is magic in Elen too," says Lyudmil Todorov. 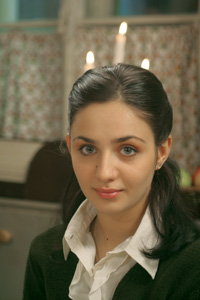 "I want to act in all sorts of roles, I don't want to be limited to a particular type of character," she says. Elen bears some resemblance to Sophie Marceau and even feels some affection for France, but in her own words, she resembles more a heroine of Almodovar's, "absurd and emotional". Unlike her real self, Elena in Seamstresses is calm, level-headed and sensible.

Elen is the only one of the three girls who comes from the country, like the seamstresses. "Like all country girls, I have also encountered the cliche that girls like us are ready for any compromises to succeed. Yet for me, provincialism is not a matter of geography. It's a way of thinking. For example, I will never sacrifice my love or family for my career."

Fame is unimportant too. "A person shouldn't become presumptuous. I do hope that vanity will not get the better of my work." When she was a child, she told her mother that she would win an Oscar. With years, however, Elen has become more sensible.

What is the difference between Bulgarians and foreigners living in Bulgaria? "Foreigners probably find it very hard, because there is a certain cultural difference - in mentality, patterns of behaviour or standard of living."

Foreigners have a much more positive attitude, while the Bulgarians "have a large heart, they are emotional, but their everyday life makes them small. They could change under different circumstances, but I think it's innate for them to be glum, depressive or melancholic". Elen bursts out laughing - just like her heroine Elena, who can laugh in the most desperate situations, seconds after she has shed a lake of tears.