The international Caritas organisation was established in Europe after the Second World War at a time when coordination among different charities was needed. A bishop, who later became Pope Paul VI, suggested that the Catholic Church's relief, development and social service agencies should unite. In this way Caritas Internationalis was born.

Caritas has existed in Bulgaria since 1989, the year of the fall of Communism. At the beginning it was based on links between local Catholic priests and their Western European colleagues who sent humanitarian aid to Bulgaria. The desire to distribute assistance efficiently led to the establishment of the National Catholic Federation Caritas Bulgaria in 1993. This comprises member organisations from Bulgaria's three dioceses: Caritas Ruse, Caritas Sofia and Caritas Plovdiv. Their remit is wide - providing hospital beds as well as children's day centres, meals on wheels for the poor, home care for the elderly and even pottery courses for single mothers.

Caritas Bulgaria upholds the aims of the International Catholic Confederation Caritas Internationalis of which it is a member together with 153 other organisations in 198 countries. But its general secretary, Emanuil Patashev, stresses that the Bulgarian branch is completely autonomous - all decisions are taken here. An engineer by training, he has been with the organisation since its inception in 1993. A practical person, he prefers discussing real activities to projects. He also likes to think of people actively changing their lives rather than being passive beneficiaries.

What are Caritas' objectives?

The vision of Caritas Internationalis, as worded by its founder, Pope Paul VI, is a culture of love and a society dominated by justice - which is incumbent on us all to build. We are guided by abiding concerns for human dignity, solidarity, justice, reconciliation and dialogue. Via our three Bulgarian organisations, Caritas Ruse, Caritas Sofia and Caritas Plovdiv, we try to improve the lives of the disadvantaged.

Your organisation cooperates closely with the Catholic Church. Who do you help?

We see the world through the eyes of the Catholic Church, which view all mankind as God's creation. Our fundamental guiding principle - the sanctity of the dignity of man - rejects all kinds of discrimination, whether on grounds of ethnicity, age, religion or gender. We work with a wide variety of people. We discriminate only in terms of their need: we divide them into target groups and into those we can or can't help. Obviously, we can't assist everyone.

We concentrate on several of these groups. One of them is elderly people who live alone and need medical and social care. We also work with children and young people, again irrespective of their ethnic origin. We try not to separate those with disabilities from the rest, although we do have two types of day centres: the first is for children and young people with disabilities, where we try to end their isolation, and the second is for after-school activities, which acts as a kind of barrier to addictions. We also develop other kinds of young people's activities. We provide an incentive for children, mostly from the gypsy minority, to attend school by giving them lunch. We also support single mothers. They come to our day centres together with their children. Besides having the chance to chat with each other and to a therapist, we teach them various skills and give them medical aid and food.

Though the number of refugees in Bulgaria has fallen in recent years, we try to support those applying for Bulgarian citizenship. The state is legally obliged to provide them with minimal financial assistance and then they receive social and medical services from us. We also work with drug addicts in two mobile clinics - in Sofia and Burgas. We forge contacts with individuals addicted to psychoactive substances, take blood tests and direct them to treatment. We also help them in the event of emergencies and natural disasters.

Where are Caritas centres located?

The centres are located in 29 cities and villages throughout the country. We use the church's network. Hence Ruse and Plovdiv take care of north and south Bulgaria respectively (the two dioceses practise Roman Catholic rites) and the diocese in Sofia, which practises Greek Catholic rites, is responsible for communities all over Bulgaria. We generally do not work nationwide. We only did this at the beginning when we dealt with humanitarian aid. A similar thing happened last year, because we helped people affected by floods. In that instance we were working throughout the country. 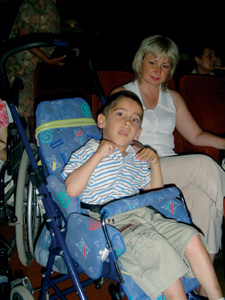 What kind of people work for Caritas?

Around 90 percent of our paid employees are Orthodox Christians. Most of our volunteers are Catholic, probably because we undertake most of our activities in areas with a Catholic community. Volunteers share our organisation's principles.

How is your organisation financed?

Two thirds of our annual funding comes from partners in the international Caritas network, mainly from Europe. Some funds come from donations and other income stems from joint projects that we apply for to governments or European foundations and programmes.

What are the strongest points of Caritas?

Good partnership based on mutual trust and shared use of skills. There is no rivalry whatsoever between the network's various organisations - each of them is ready to help, regardless of its location. But all work in the social sphere must be carried out in line with certain principles.

Is Bulgaria's accession to the EU a challenge?

The accession is undoubtedly good news, but it could lead to some financial difficulties. In addition, laws covering donations are not ready yet. Our role is changing too. At the beginning, we gave out free humanitarian aid to people, but then we tried to attract them and work together with them. Now, we prefer not to call them beneficiaries so much as clients who use some of our services. We encourage them to realise that they are responsible for resolving their own problems. Our role is purely a supportive one. We also ask those who can afford to pay for the services to do so. Their financial participation is the highest reward we can receive for our work.