At the carnival in Rio you'll go Ah!, that's certain, while in Venice you'll go Uhm! when you meet the mysterious ladies behind Neo-Baroque masks.

Instead of Ipanema chicks, however, at the masquerade in Bulgaria you'll be confronted by wild, prancing kukeri, or mummers, with cowbells tied to their belts and horns on their heads. However, the sexual charge of the mummers' games is stronger than in Rio or Venice – because it is much more overt.

All over the world, pre-industrial societies performed raunchy rituals to ensure nature's rebirth and the fertility of their fields, livestock and, quite politically incorrectly, women. St Valentine's Day was no exception, despite its present-day face-lift. For their part, Bulgarians have kukeri, a tradition that can be traced back to the Thracians.

It was so deeply rooted that attempts by the Third Council of Constantinople in 680 to ban it failed ignominiously. The church had to keep its hands off the pagan ritual and leave the laymen to enjoy the mummers' festivities on Sirni zagovezni, the day before the strict Lenten fast began.

When you find yourself among mummers, who parade through the streets and barge into people's courtyards, you may think it is the perfect definition of “chaos”. The clatter of bells that accompanies the event only reconfirms your opinion.

Despite appearances, however, the kukeri are a strictly hierarchical group – even the laziest observers can easily pick out the leader. Wearing a mask of fur, chicken wings, horns and sporting dried beans for teeth, this important if undignified figure is in fact the only one who has the right to be called a kuker. The kuker uses the red, metre-long wooden phallus hanging from his waist to chase and poke women in the street – supposedly curing infertility. The other mummers spoof personages who Bulgarians think deserve to be ridiculed. The cross-dressing “granny,” for example, is the kuker's (rather ugly!) wife. The parody of the couple having sex is a magic ritual for fertility. 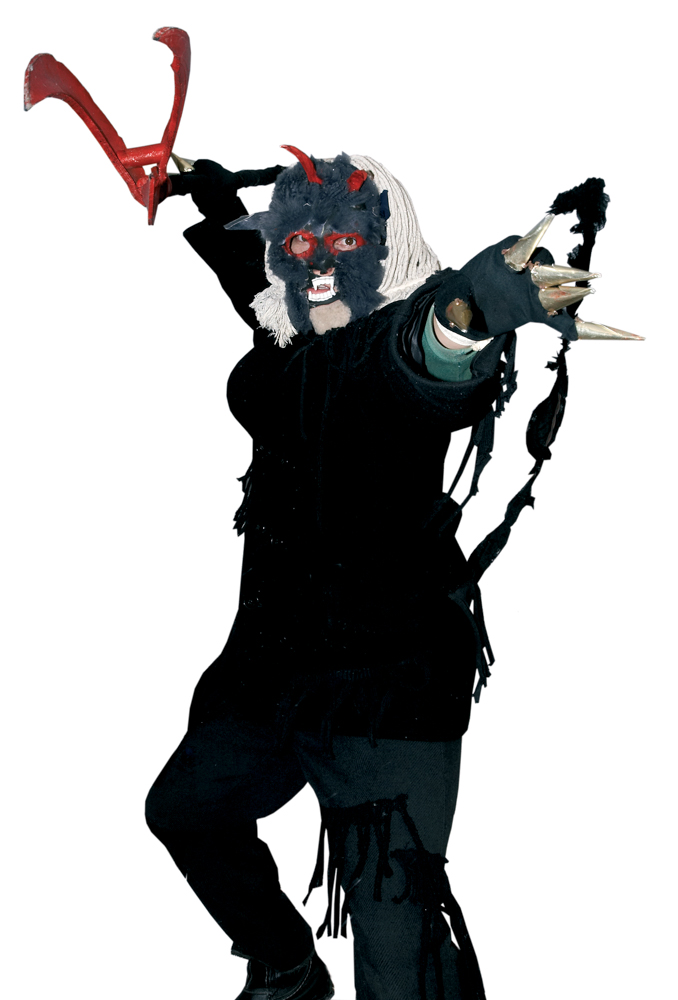 The ancient Egyptians used to have a similar rite: every year they acted out Isis's conception of Horus from the dead Osiris. The “granny,” who “gives birth to a child” at some point in the masquerade, is just the tip of the carnival iceberg, again not very politically correct. The kadi, or judge, a relic from Ottoman rule, passes judgments on people, while the hrachars, or tax collectors, demand payment from anybody who comes their way. The “Gypsy woman” and the “Gypsy man” try to steal things; the “bear keeper makes his “bear” dance; the “Orthodox priest” and the “imam” wed unsuspecting passers-by; the “barber” shaves them; and the “camels” fight with one another.

The motley group also includes the “king” with his retinue. When the carnival is over, he invites all mummers to a large table laid with food, blesses them and the whole community, and finally puts them all in a harness and begins “ploughing the fields”. This is, of course, another fertility ritual.

Twenty-first Century mummers are hardly the lecherous revellers of yore. Like the Venice carnival, which is now prettified and sanitised of the promiscuity of Casanova's day, it has changed. Urbanisation and the establishment of organised folk groups since the 1950s have turned it into a staged – and expensive – version of erstwhile bacchanalia. Some of the masks cost several thousand leva to make.Nevertheless, joining a crowd of kukeri at one of Bulgaria's numerous regional and local fairs remains a memorable if ear-splitting experience. The sexual element is reduced to a PG level, but the mockery is as biting as ever. Alongside the traditional bear keepers, kings and camels, you can now see some contemporary bogeymen. Two years ago, for example, one of the festivals featured personages such as “terrorists” and the “bird flu”.

Admittedly, it's nothing like the celebrations in Venice or Rio. But Bulgarian carnival does have one advantage, however: it is not limited to the days around Sirni zagovezni. In the west and southwest of Bulgaria, the kukeri hold their festival in December, and in the east and south you can spot them in January and February.

Kukeri and where to find them

The games have long become a merely decorative event, so most Bulgarians do not even suspect that their predecessors had dozens of synonyms for kukeri, such as kukuvtsi, babugeri, babushari, dzhamali, dzhamalari, startsi, dervishi, arapi, kalugeri, eshkinari, drakusi, survaskari and kamila.If you want to see them for yourself, you need to do a bit of planning. On Sirni zagovezni, which falls on 9 March in 2008, there are mummers' games in Pavel Banya. On the next day, Pesi ponedelnik, they are held in Shiroka Laka. The biggest mummer festivals are in Pernik at the end of January and in Yambol in February. There are also kukeri in Razlog, Bansko, Lesnovo near Elin Pelin, Rakovski, Brezhantsi near Blagoevgrad, and in the villages of Popintsi near Panagyurishte, Parvenets near Plovdiv and Yasna Polyana near Burgas. In fact, if you schedule it right, you can spend over a month travelling around Bulgaria and taking part in the mummers' games.