If you've just moved to a village in Bulgaria, some things may be a bit of a shock to your system. Houses with roofs on the verge of collapse, ancient women using homemade hoes on acres of land and mangy dogs on short chains with no water in sight are just a few examples. In the UK, buildings would be condemned, social services would be called and the Animal Protection Service would come running, yet all these things are normal here; local folk don't even bat an eye.

After a while you get used to these things and may even start to think that the UK is rather coddled and overbearing with some of its “rules” (barring the animal cruelty ones, of course). So imagine then that you're feeling happy about your new integration into another culture and are strolling merrily down the village lane one crisp December morning, when you notice a gathering in front of a neighbour's house. You're beckoned over by your excited neighbour, so you approach the merrymakers and the table laden with all sorts of nibbles and drinks. Then you stop, realising what all the fuss is about. Laid out in all its gutless glory is a huge pig, draining blood into the road, dead eyes staring, oblivious to the party in its honour.

A pig-slaughtering party, or “pig funeral”, is an age-old festivity in Bulgaria. Villagers invite their neighbours, and city slicker family and friends alike to enjoy the celebrations and share the meat. It is an important ritual providing hope and happiness in the cold winter period, as the meat and other delicacies produced from the pig will keep the food stores topped up for months.

If you are invited to a pig-killing party, which is a very normal invite for a neighbour to proffer, you may feel a little scared, even horrified. In Britain the domestic slaughter of animals is more or less banned, with heavy sanitation and compassionate regulations required for those places that do make meat. 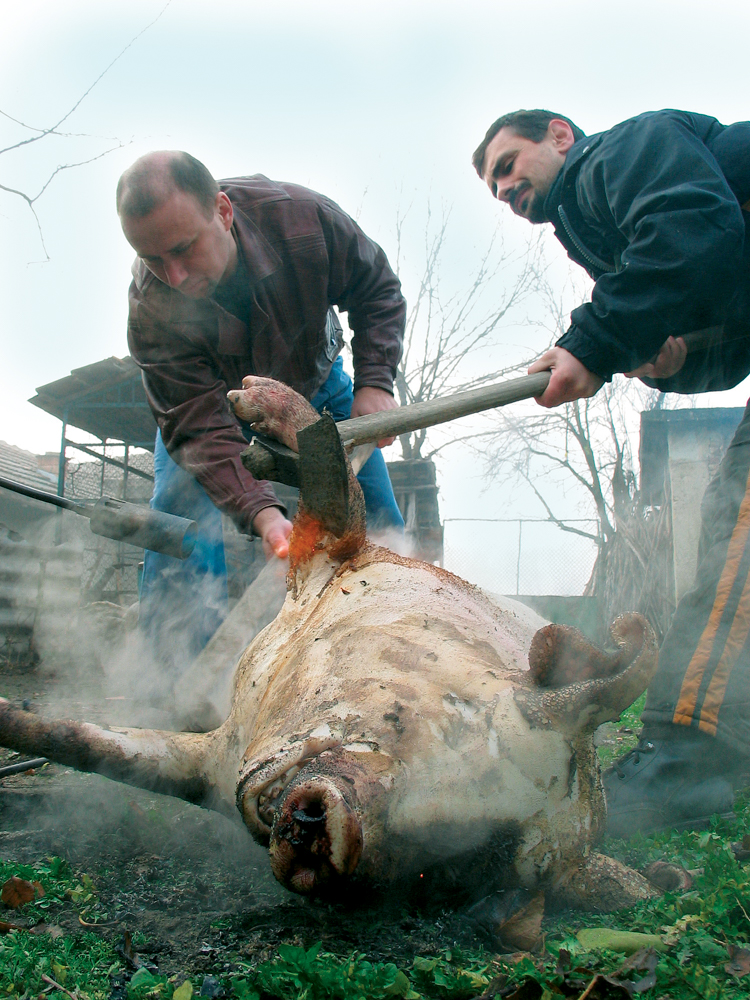 Killing a pig the Bulgarian way is a very unsightly procedure, definitely not for the fainthearted

However, not too many years ago it was as commonplace in the British countryside to raise your own cattle to eat as it was to make your own jams and chutneys. Nowadays, people only see chicken, lamb and beef in polystyrene and cling-film packaging in the supermarkets, looking completely un-animal-like. Is it better to eat this meat, knowing it may have come from an animal that lived in un-nurturing, cramped conditions and then slaughtered haphazardly with a stun gun or some other “humane” method, as opposed to the meat of a single animal that was cared for all year and then killed compassionately?

Although the thought is shocking at first – some urban Bulgarians even find it animalistic – the actual celebration is very uplifting, although still not suitable for those with weak guts. On the pig's last morning the guests arrive at the house and all drink a toast of warm rakiya, often mixed with honey.

There is a huge spread laid out with snacks, fizzy drinks and lots of red wine. The pig is brought out and given a bucket of food for distraction, then it is killed with a single pierce on the neck, if the butcher is skilful. If he isn't, he may resort to an axe, or even a bullet to a particularly weak spot on the skull between the eyes that knocks the animal out and usually kills it instantly.

Horror stories of half-killed pigs going into a blood-soaked frenzy and running haphazardly through yards proliferate, but in actual fact such instances are not that common. Once he pig is killed its throat is then cut, which drains any remaining life out. The coarse hair is scorched from the skin giving off a peculiar smell. If you are a vegetarian or simply want to avoid this part of village life, this distinct smell will prevent you from accidentally stumbling across a pig killing party. The pig is then turned onto its back on a table and is sliced from the throat down the belly to the tail. Then it is cleaned and doused with a sterilising solution. Skin and fat are removed and often raw chunks of the fat are salted and laid out for guests straight away. The innards are removed and sorted by participants and then the rest of the pig is butchered into the various cuts, with no part being wasted in the process. Sausages, salami, mince, liver, roasting pork and all other sundries are extracted from the animal and given to guests or put in the freezer, left to hang and dry, and so on. 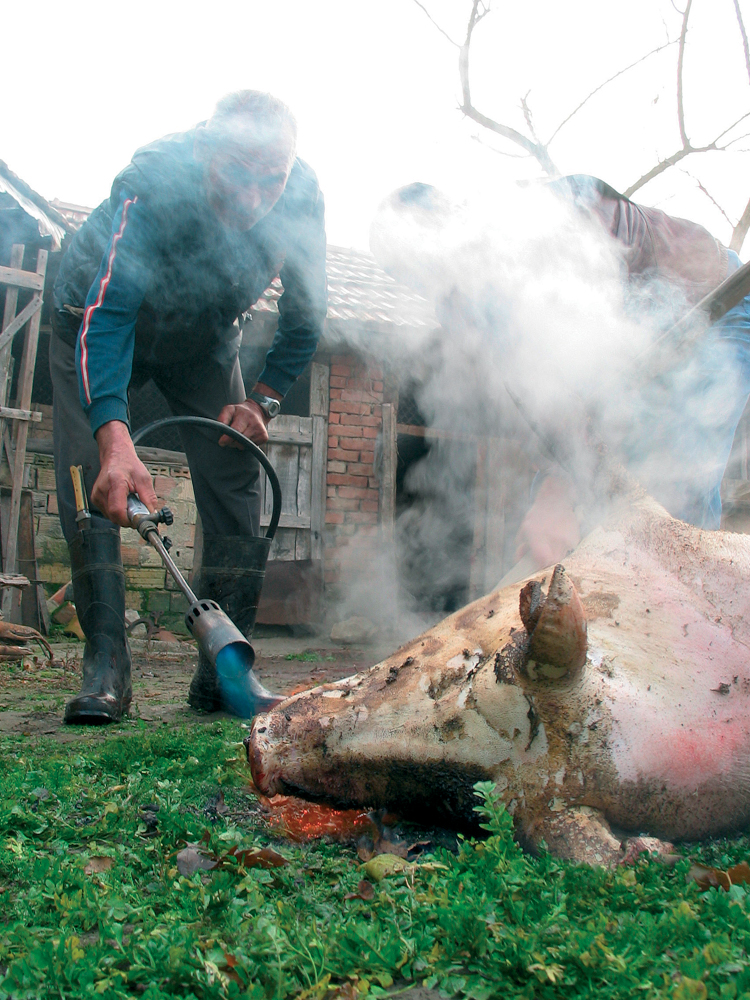 Traditional food such as sarmi, or stuffed cabbage leaves, mixed rice and of course pork, will be served later in the day after the grizzly deed is fully done. The pig parties will often carry on late into the night with much rakiya being shared by all.

So this begs the question: if you eat meat, should you be brave enough to kill it? What would you do if you were invited to join the “fun” – or even to kill the pig yourself? This invite is extended with the greatest of respect to expats who move to Bulgarian villages and many duly attend, either out of a desire to throw themselves into the deep end of integration or out of politeness, averting their eyes at the crucial moment. If you are a complete culture vulture, you ought to attend one of these parties while you still can. You're sure to be sent home warmed through from the rakiya, with a handsome “goodie bag” of kyufteta or meat balls, pork dripping, a roasting joint and crackling.

It won't be long until rules and regulations in Bulgaria put a stop to this time-honoured Balkan tradition, just as homemade rakiya is now facing high taxation in accordance with EU rulings. In a few years, village dwellers may have to take their pig to a registered slaughterhouse to have it killed by a registered slaughterer – which, of course, will cost some money not to mention the distress of transporting the pig to a scary and unfamiliar place.

For now, some Bulgarians hope for the sake of the self-sufficient villagers that this particular tradition remains, and that families can continue to provide for themselves during Bulgaria's bitter winters without becoming victims of heavy-handed legislation.