Unless you've already had too many beers or Rakiya, this country's "national drink," you will sooner or later notice that restaurant service in Bulgaria is often bad. Sometimes it can get even worse. 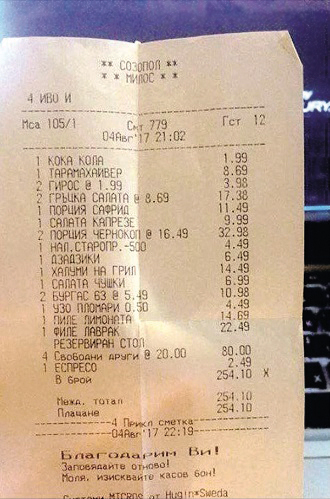 At the peak of this summer's season a group of restaurant-goers in Sozopol, at the Black Sea coast, resorted to the currently fashionable Small Claims Court, known also as Facebook. They told the hundreds of thousands of Bulgarians whose chief source of information is Mark Zuckerberg's invention that they had booked a table at a restaurant but not all of them showed up for dinner. Four chairs were left empty. At the end of the evening they were presented with a bill that listed an "empty chair" tax, something that the inventive owner of the restaurant had designed to ensure his establishment was occupied to full capacity.

Yes, you've read the above correctly. An Empty Chair Tax, or ECT!

Characteristically, dozens of jokes were immediately put into circulation. According to one, there would be a new tax called EAT, for Empty Ashtray Tax. You have an ashtray on your table but you don't use you it because you don't smoke? Well, you have to pay a tax for it. There is also the one about the No Other Drink Tax. "Want another drink?" the waiter asks. "No, thank you," you reply. Then the NODT comes into effect.

The Sozopol incident was so absurd that Prime Minister Boyko Borisov was quick to seize the opportunity to make some publicity for himself. Appearing as the deus ex machina that has befitted him in his third term in office, he ordered Nikolina Angelkova, installed by him to be minister of tourism, to initiate a tax probe into the Sozopol restaurant. Unsurprisingly, a few days later it was reported that there had been no irregularities.

Significantly, eager Bulgarians were left to wonder what would have happened had the prime minister not spared a minute of his precious time to order his tourism minister to act.

In the meantime, Boyko Borisov's deputy, Valeri Simeonov of the National Front for the Salvation of Bulgaria and himself a hotel owner, led a bunch of cops in Sunny Beach to probe… the noise levels emitted by the local discos.

Those DJs who were uncooperative got their equipment impounded. Revellers were unhappy, but the message was again rammed home.