THE SILENCE OF THE STONES | VAGABOND Skip to main content

THE SILENCE OF THE STONES

Stone circle at Staro Zhelezare has survived for millennia, but is now slowly disappearing 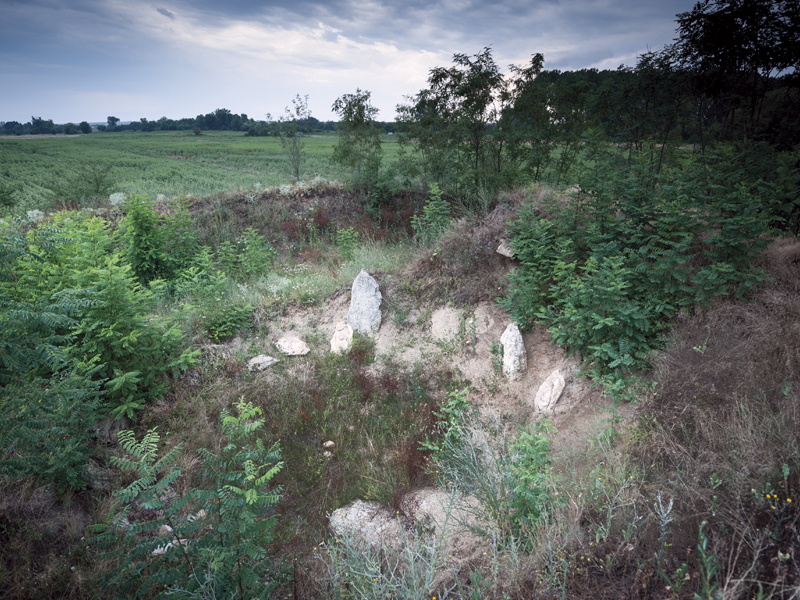 In 2002, a team led by the late Dr Georgi Kitov, whose flamboyant character and talent for discovering gold Thracian treasures made him one of the most famous Bulgarian archaeologists, started digging a relatively small and seemingly ordinary mound on the outskirts of the village of Staro Zhelezare, in Central Bulgaria. The region abounds with remains of the ancient Thracians, dating from the 6-4th centuries BC, and finds such as a supposed temple at nearby Starosel and a bronze sculpture portrait of a Thracian king supported Kitov's theory that the area is, for Thracian studies, what the Valley of the Kings is for Egyptology.

The mound at Staro Zhelezare had not been robbed, as had so many others all over Bulgaria. No one, however, was prepared for what the tumulus was hiding. Beneath the earth, there was no grave of some Thracian nobleman, nor an elaborate tomb, nor a chariot with slaughtered horses still in harness. There was no gold.

Under the tumulus 24 stones stood erect, forming a circle with a diameter of about 7 metres. The slabs in the north part of the circle rose up to 1.8 metres, while the stones on the south, with one exception, were less than a metre high.

Dr Kitov's team had discovered a cromlech, a type of megalithic structure whose most famous representative is Stonehenge.
Megalithic structures in Bulgaria are not uncommon. Constructed in the 2-1st millennia BC by the ancient Thracians, they define the landscape in the Eastern Rhodope and the Strandzha: spectacular rock sanctuaries and rock-hewn tombs, mysterious rock niches, dolmens. Cromlechs are rare, though, and there is only one other besides the stone circle at Staro Zhelezare. It is bigger, and was found on a rocky hill near the village of Dolni Glavanak, deep in the Eastern Rhodope.

When and why the Staro Zhelezare stone circle was created is still a mystery.

According to its discoverer, Dr Kitov, the stone circle was erected in the 6th Century BC and was used for astronomical observations. Other researchers suggest that the cromlech was built around the 10th Century BC, the peak time for megalith construction in Bulgaria. The tumulus was erected later to hide the stones, for some unknown reason. We will probably never know why. The Thracians were reluctant historians and left scant written evidence about themselves.

Regardless of its scientific importance, the Staro Zhelezare stone circle seems doomed to disappear.

In Bulgaria, archaeologists are too often keen to discover interesting sites and, if possible, make the news with some spectacular find. Once the work is done, however, there is rarely money for the preservation of the excavated site and soon the elements start their destruction of structures and buildings which had survived for centuries.

The Staro Zhelezare cromlech is a disturbing example for the attitude of both professional historians and the state towards the remains of the otherwise widely advertised rich past of the Bulgarian lands.

In Staro Zhelezare, Dr Kitov's team dug deep around the stones of the circle, leaving them exposed to erosion. After they had finished the job, the archaeologists constructed a flimsy cover over the tumulus. Soon, the roof collapsed and wind and rainwater started eating into what remained of the mound. Several years after the discovery, all the slabs had fallen down, and the undergrowth had taken over, hiding everything in tall grass and thorns. The fact that the village's dumping ground was only metres away from the stone circle made things worse.

The cromlech can still be saved. After an NGO devoted to the protection of Bulgaria's cultural heritage made some noise, the state sent a commission to Staro Zhelezare. The commission decided that it would be best if the remains of the stone circle were again covered with a mound. After all, the tumulus had protected the cromlech for millennia, and quite successfully. Reburial of the site would also protect it from another problem the archaeological heritage of Bulgaria is often subjected to, namely overbuilding and overrestoration, which have turned places like the Yaylata fortress into ghosts of their former selves, and have made sites like Tsari Mali Grad fortress in Belchin unsuccessful Bulgarian reincarnations of Disneyland.

For the enthusiasts of the Lets Save the Staro Zhelezare Cromlech Foundation, however, the cromlech can be saved as it was, without losing its spirit or scientific significance. Their campaign, which started in 2013, aims to re-erect the slabs of the circle in their original positions, and to build a state-of-the-art protective cover over it. Local infrastructure will be fixed, and the cromlech will become a major highlight of the Thracian heritage tour of Bulgaria. The enthusiasts have already started to preserve the stone circle. The local mayor has moved the dumping ground to another place, and the undergrowth has been cleared. The foundation's next step is to raise enough money for archaeological research in 2015, led by one of Bulgaria's top archaeologists.
For more information, check the Facebook page of the project.