Do not walk on the grass because it is yours!

One Georgi Dimotrov and two Lenins

First-time visitors to Bulgaria are bound to spot them at some stage: little metal plates hung at street corners, in parks, in Communist-era office corridors, perhaps in a ramshackle old factory or two (if you happen to wander round any of those).

The plates are neatly written in indecipherable Cyrillic. Who devised them, you may ask yourself? If you happen to come from one of those countries where signs are actually supposed to mean something useful to the public, like "Mind the gap", or "Push the bell only once", you may well wonder what they are meant to convey.

Like so many things under Communism, when Bulgarians had to take part in elections when just one party was standing, they do not mean anything at all.

So, you would be justified in asking who invested all the time and effort, not to mention the money, into actually manufacturing these meaningless signs. To answer this question, let's take a little look at the background.

One of the most irrational aspects of the Communist system was its claim to omniscience. As the sole leader of the industrial, peasant and cultural establishment, the Communist Party had a penchant for issuing directives on virtually anything, from farming to May Day parades and sports. During this period, Bulgarians were subject to whimsical orders concerning nearly all aspects of their lives, while toiling through five-year plans and "counter plans". If you were told you had to make five metal sticks a day, the correct reply was "No, no, no, I shall make seven metal sticks a day!". This was a "counter plan". In this way, the Communist Party tried not only to control every facet of the planned economy, but by incessantly ramming home the advantages of cleanliness or of crossing the street in the right place, of citizens' private lives too.

As the senior establishment was preoccupied with far more important things, such as organising its own congresses, than producing the metal plates to enforce these messages, this task was left to the Party secretaries in the provinces. In fact, an entire mini-industry developed around them. Party secretaries employed painters to paint slogans and, more importantly, thinkers to think them up. Although there was a Party Academy where cadres were taught how to manage Party affairs, the sign inventors were evidently not major intellectuals, which accounts for the proliferation of typos, bad grammar and haziness of ideas promulgated in their products.

Many signs focused on the need to "preserve" cleanliness, otherwise extolled as a "traditional" Bulgarian virtue. A particularly instructive example of this is a notice that announces: "It is allowed to shake underwear and blankets over the non-front facade balconies Mornings from 7 to 9 o'clock (On Sundays from 8.30 to 9 o'clock) Afternoons from 17 to 19 o'clock".

Others, such as "Do not spill the water without reason", remain somewhat more enigmatic.

While it is clear that the establishment ordered the production of these signs in order to assert its control over every aspect of life, social psychologists have yet to examine what inspired them to come up with such messages. Perhaps they earnestly believed that Bulgaria would be a better place in a classless future if its citizens were reasonable water spillers and law abiding underwear shakers?

While you seek your own answers to the mysteries of centralized thinking, enjoy our collection, and please bear in mind that many of these signs were written in such unconventional or just plain bizarre language, that translation really does them a disservice.

Do not spill oil on the work site! 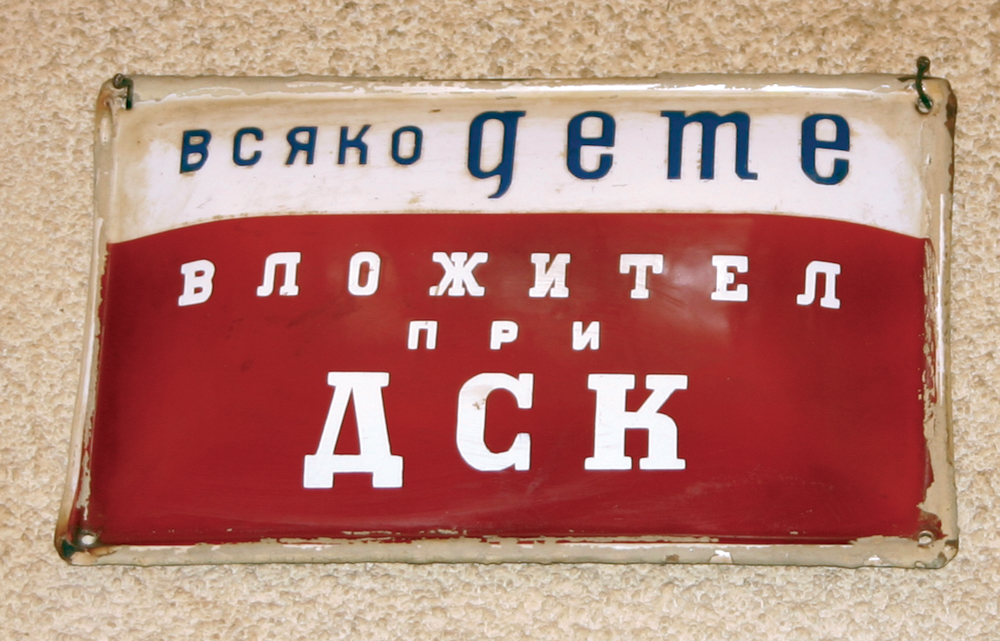 Every child - a depositor at the state savings banks 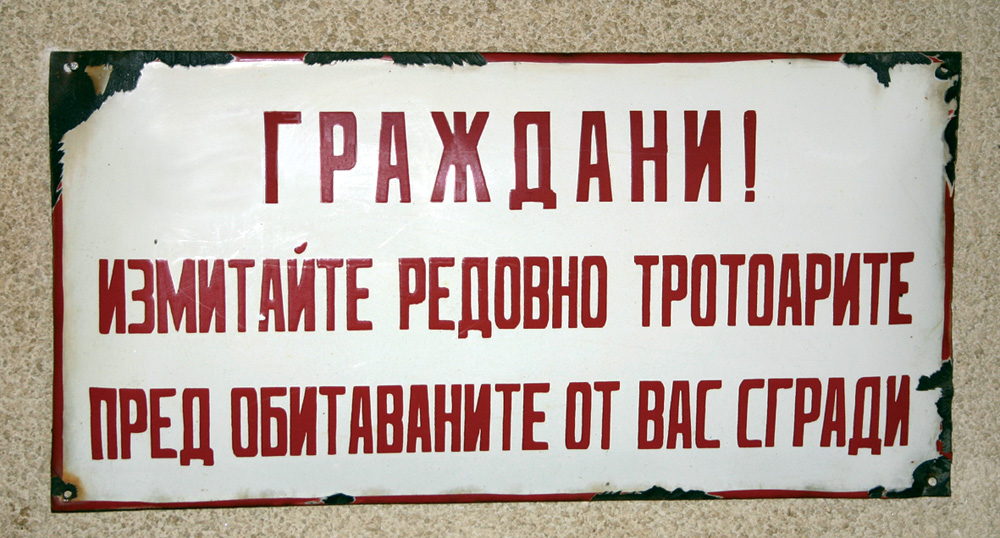 Citizens! Regularly sweep the sidewalks in front of the buildings inhabited by yourselves