SIX MEN IN A BOAT (TO SAY NOTHING OF THE LEADER)

April is a terrible month - not cold enough for skiing and not warm enough for swimming. And weekends are the most terrible days of this month; you stay at home and while wondering what to do, engage in meaningless things like rearranging your books. For rafting fans, however, there's no better month than April. The snow in the mountains has melted and filled the rivers with "white water," just excellent for the purpose.

"It feels like you're riding the crest of a wave. You become part of the water; you and the river become one," Marian still remembers his first rafting experience in the Kresna Gorge as if it had happened yesterday. One of the things he particularly enjoys is that this adventure is close at hand and can be easily fitted in a busy working schedule. Rafting does not require journeys to distant lands nor any special training and Bulgaria has enough rivers suitable for this sport. Most of them are relatively close to the larger towns. What is essential, however, is to be able to swim.

The rest is to have enough enthusiasm to get up early on a Saturday morning so that you can get to the Kresna Gorge on time. It is slightly over 100 km away from Sofia along the road to Greece. This spot where the Struma cuts through the mountains separating them into the Pirin on the east and the Malashevska Mountain on the west is among the most beautiful ones in Bulgaria. Well worth visiting even if you are not keen on rafting. But to see it from the water level is a different matter.

When Marian decided to give it a try for the first time, he found out that the rest of his group were also beginners or had very little experience. They did not know one another and most of them had booked on the Internet. "You are a bit scared, but that's perfectly natural," Marian says. Those who decide to take up rafting are usually attracted by other extreme sports too, like alpinism, abseiling or paragliding. For them, rafting is an escape from the daily routine.

The first and absolutely essential part of the whole undertaking is the training. Novice rowers get acquainted with their craft, which seats six people, plus a leader. It is made of special rubber and the separate horizontal sections protect the raft from inopportune bending. The paddlers sit along the sides of the raft, the leader at the back. The two paddlers at the front have to be strong, so that they can steer the boat when the leader tells them to and keep up the tempo. Rowing has to be completely synchronous with everybody obeying the leader's commands unquestionably. There are only a few of them: "Row", "Stop", "Duck", "Hold tight" and "Go back." 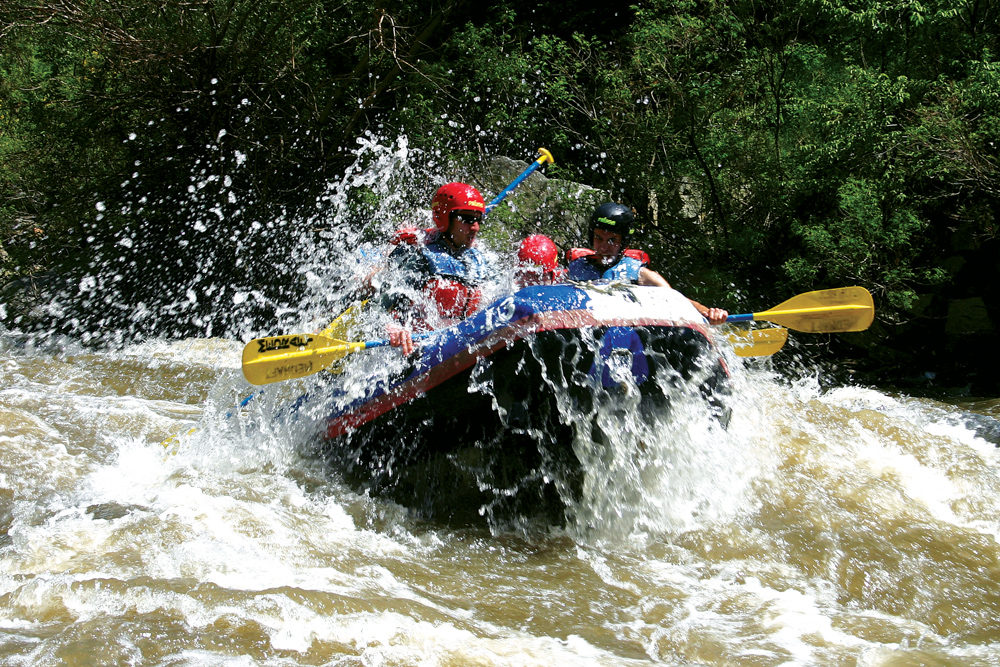 Rafting instructors say that the most important thing to understand is that you can't win against the river. But if you know how, you can use its power. This is why the main problem is not whether the craft will break up in the rapids, but whether the people in it can deal with the situation. Level-headedness is what matters most in such cases.

If you fall in the water, you shouldn't try to swim; the life vest will keep you on the surface anyway. You simply have to lie back and not panic.

As with every extreme sport, injuries are possible. But if you stick to the safety rules, have good equipment and can judge the situation accurately, the risk is minimal.

When training is over, all rafters don their neoprene suits, life vests and helmets. Then each grabs a paddle and the adventure begins.

"It was easy at first, because the river was calm. Then it got fast, furious and wet. Very wet," Marian remembers. The rapids and falls follow each other in quick succession, the water whipping up into a white froth and all you can hear is the rumble of the river and the commands of the leader. "I've never got such a kick out of anything, it was as if we were dancing on the waves," he says. The rafting route along the Struma River in the region of Kresna is about 10 km, or 6 miles, long. Beginners do only half of it. In some spots, the level of difficulty reaches two or three on the one-to-six scale.

Grades one and two do not require any special skills; for grade three you need good physical fitness and the ability to manoeuvre; grade four denotes a very difficult route; and grades five and six are reserved for real experts. In their view, rafting is something you learn all your life, because, as Heraclitus said long ago, "panta rei", the river changes all the time. Whoever underestimates it may pay a dear price for his conceit.

Two of the difficult stretches along the Struma are called the Cascade and the Speciality. There the river takes a few sharp turns within a small distance and goes downhill steeply. If you lack the experience, however, you have no chance of getting through: the rafting companies choose the route according to the skills of the crew.

Though following an easy route, the first rafting experience is something that beginners will never forget. "I was tired and full of energy at the same time," Marian says. He likes being at the front because of the challenge to be the first to plunge into the rapids. The two-hour descent seemed like it lasted just a few minutes and when it ended he felt as if he had known his raft mates for years.

Since then, all the days when Marian is not in the white roaring water look the same: dull. 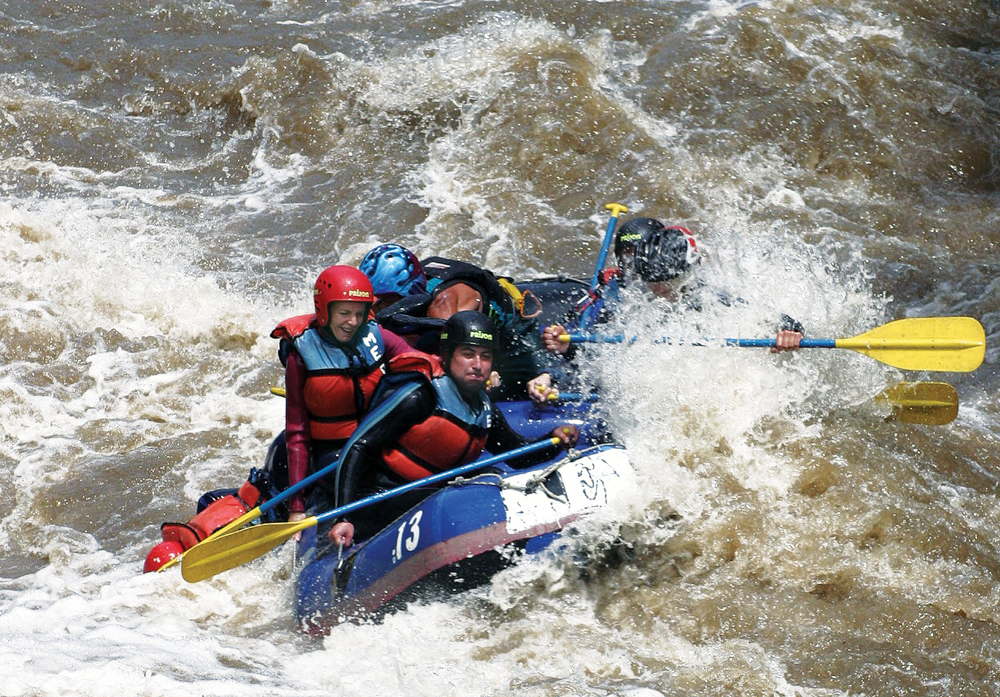 Remember that you must always obey the leader's instructions. He knows the river better and can see possible dangers, even if the water appears calm.

Choose suitable clothes. Water temperature may drop unexpectedly even if you are rafting in midsummer. So you need a neoprene suit and watertight sports shoes. Sun cream, lip salve, sunglasses, a hat, gloves and a change of clothes are always useful.

A life vest is compulsory even for the best swimmers. Accidentally falling, low-hanging tree branches and underwater cliffs are only some of the dangers on the route. Consider also the possibility of collision and overturning of the raft.

Never go rafting if you have taken drugs or alcohol. In this case you endanger not only yourself but the other crew members as well.

Accurate judgment of one's abilities is particularly important. Rafting can be an extremely exhausting activity, so it has to take account of the physical and health condition of the participants. It is not recommended during pregnancy.

The rafting season usually begins at the end of March or the beginning of April. September and October may also be suitable. The Bulgarian rivers where you may practise this sport include the Struma, the Arda, the Mesta, the Tundzha, the Chaya, the Rilska, the Beli and Cherni Rid, the Chepelarska, the Veleka, some stretches of the Iskar and the upper reaches of the Maritsa.

There are several companies in Bulgaria offering one, three or seven-day rafting holidays. The price per day does not exceed the amount you would pay for dinner at a decent restaurant. Most companies provide all the necessary equipment.

The best rafting sites in Europe are in Turkey, Croatia, Italy and Norway. Anybody really keen on this sport, however, dreams of only one thing: rafting down a river in the Himalayas.