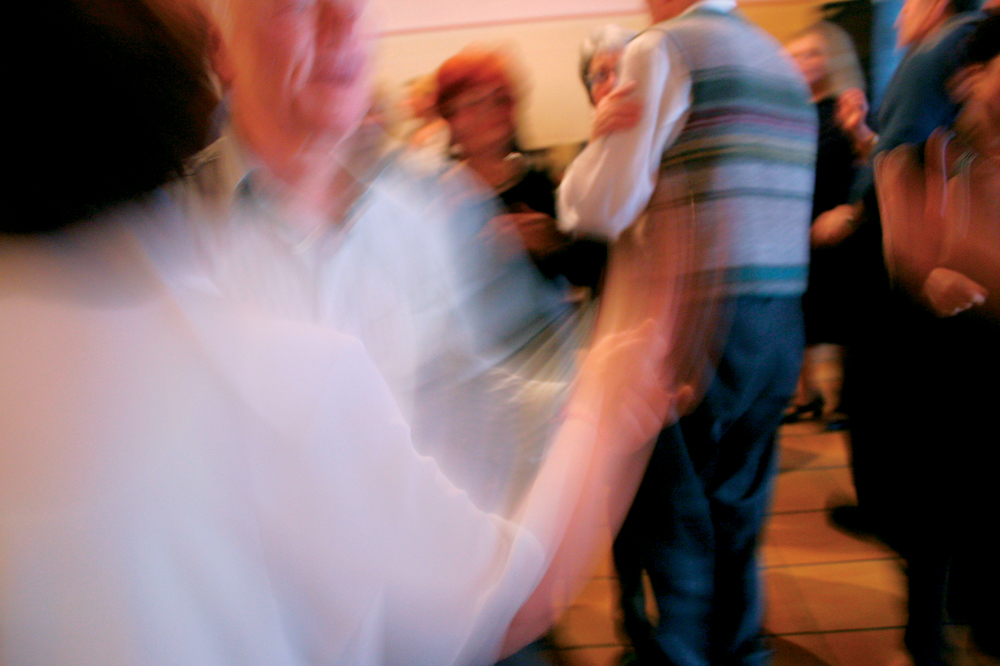 In a ritual every bit as rehearsed as his dance steps, my father carefully prepares for his weekly Sunday engagement. Impeccably dressed in his tailored green gabardine jacket, a present from a friend in London in the early 1990s, he goes dancing.

The venue is always the same: a live music hall in Sofia, but the dance and the day can vary. The tango, waltz, rumba, or foxtrot - sometimes on a Saturday, sometimes on a Sunday, although my father prefers the latter. Dancing starts at half past two and goes on until six.

It was two years ago that I first learned of my father's weekly outings and I was filled with happiness. He had been living alone for six years, since my mother's death, and had not allowed himself much fun. But my overriding feeling was curiosity. What exactly happened there, what were the people there like, and what did they talk about? From his accounts, it all seemed rather exotic. Imagine 200 or more people aged over 55, turning out in their Sunday best to tango and foxtrot every week. I could hardly imagine it actually taking place in Sofia, and I was not alone. All the friends I told instantly raised their eyebrows in surprise and exclaimed: "Come on! You can't expect me to believe that. You can't be talking about Bulgaria!" 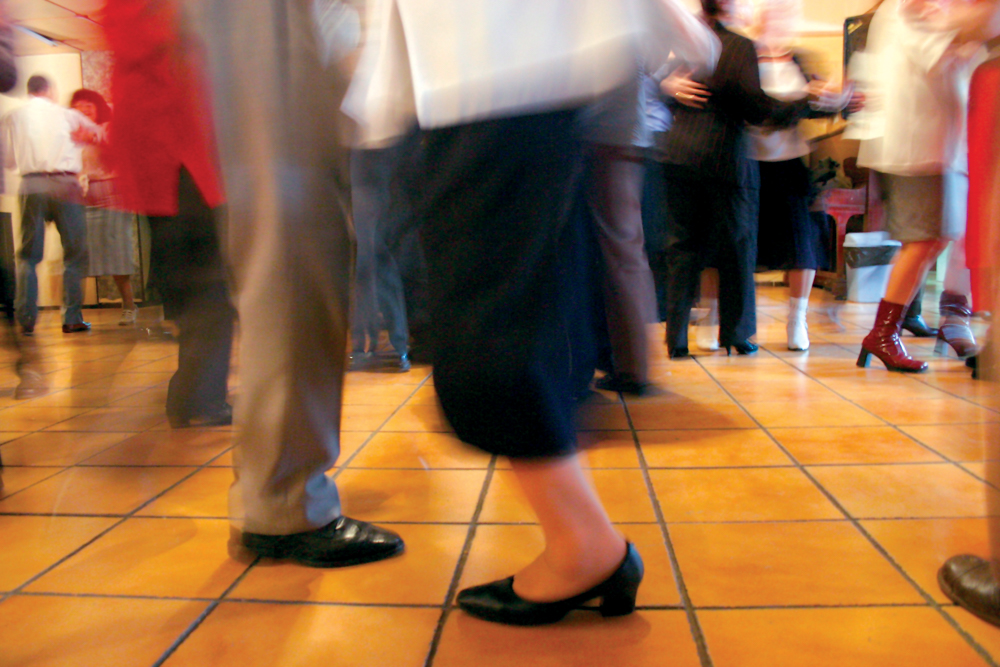 Intrigued by my father's secret passion, I decided to join him one afternoon. Paying our one lev entrance fee, we enter the venue. A company canteen in its everyday life, with a low ceiling and tiled floor, it may lack the smoky sensuality of the Buenos Aires tango hall of my imagination, but it has clearly captured others'. By half past two the dance floor is already swarming with people.

A guitar, an accordion and an organ provide the backing, along with a female singer. The dancers assemble for the firs piece, a tango. This is followed by a rumba, and then a waltz. A horo then plays, then another, and then it all happens again in reverse order, or so it seems. Some of the couples taking part are mixed, but many consist of just women.

"A lot of women come for the dancing and prefer to do it alone rather than wait for someone to ask them," explains my father's friend Maria. "They outnumber the men anyway. Besides, some men are rather cheeky and immediately offer their 'services'," she adds. This is confirmed by other women who are discussing the same topic in the toilets: "What do I need a man for? All they want is someone to do the chores."

Personal histories may differ, but the main theme is the same. "We are all widows," says Maria. "Our husbands are dead. This is the only place where you can meet somebody like you, somebody whose partner is gone too. There is another thing as well: everybody curses us senior citizens out there in the street. This is the only place where I feel like a human being. So, I come every week."

While the desire to escape their everyday lives may be strong, the impulse to share their histories is equally potent. Whether it is showing off some shoes bought from the now extinct Pirin fashion shop using the right "connections"; a fan which has hardly been used apart from the odd trip to the theatre; a pearl necklace; a dress worn for the first time since the end of the 1970s, or a shirt starched long ago, there are many stories to be shared. Ana, a singer, remembers when the militia banned swing music after 9 September 1944, the official start of Communism in Bulgaria. "And do you know why?" she asks. "Because there were no bras at the time and when the girls danced, it was... my God! They decided to put a stop to lechery - and they did the right thing!" One of Ana's companions remembers that this is what Fidel Castro did too: he banned the rumba to stop lewdness. 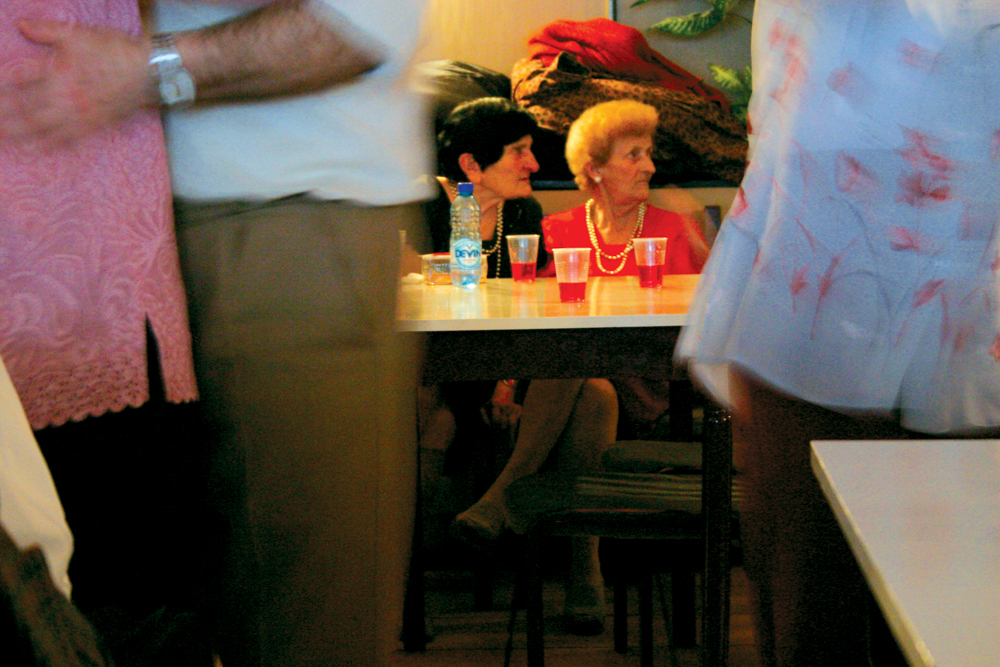 Even my father reveals surprising details about himself. Long ago, he tells me, he learned his dance steps from two gypsy boys, his neighbours. "They were very good. They would either come to my home or I would visit them, we were close friends. Then I went on teaching myself on my own, often using a pillow or a chair as a partner." After becoming more confident, he began dancing "at more demanding events". He became well known for his moves and won several regional dance contests.

"Dancing has helped me a lot in life," my father says. "If you dance well, you will always make friends." This desire for human contact and friendship is echoed throughout the Sunday dance. Each individual's story inevitably touches on death and, as I watch them circling the floor, I am struck by this need to share the past, but also to create a new present for themselves with their Sunday visits. Maria tells me about a friend who learned to dance only after her husband's death. "She had married at 17, and her husband locked her away at home and wouldn't let her go out anywhere. She came here and enjoyed it, but she didn't know the steps, so she used to come home with me so that I could teach her."

Having shared the memories and collective enjoyment of the Sunday dance, I can well imagine that my father reflects the thoughts and feelings of the entire gathering when he proudly states: "I haven't forgotten anything, even after so many years, and I feel fine."