TESLA AND SPACEX OVER IN... BELOGRADCHIK | VAGABOND Skip to main content

Bulgaria went collectively into frenzied stupefaction over a Twitter comment by Elon Musk in response to a photo of the Belogradchik Rocks. 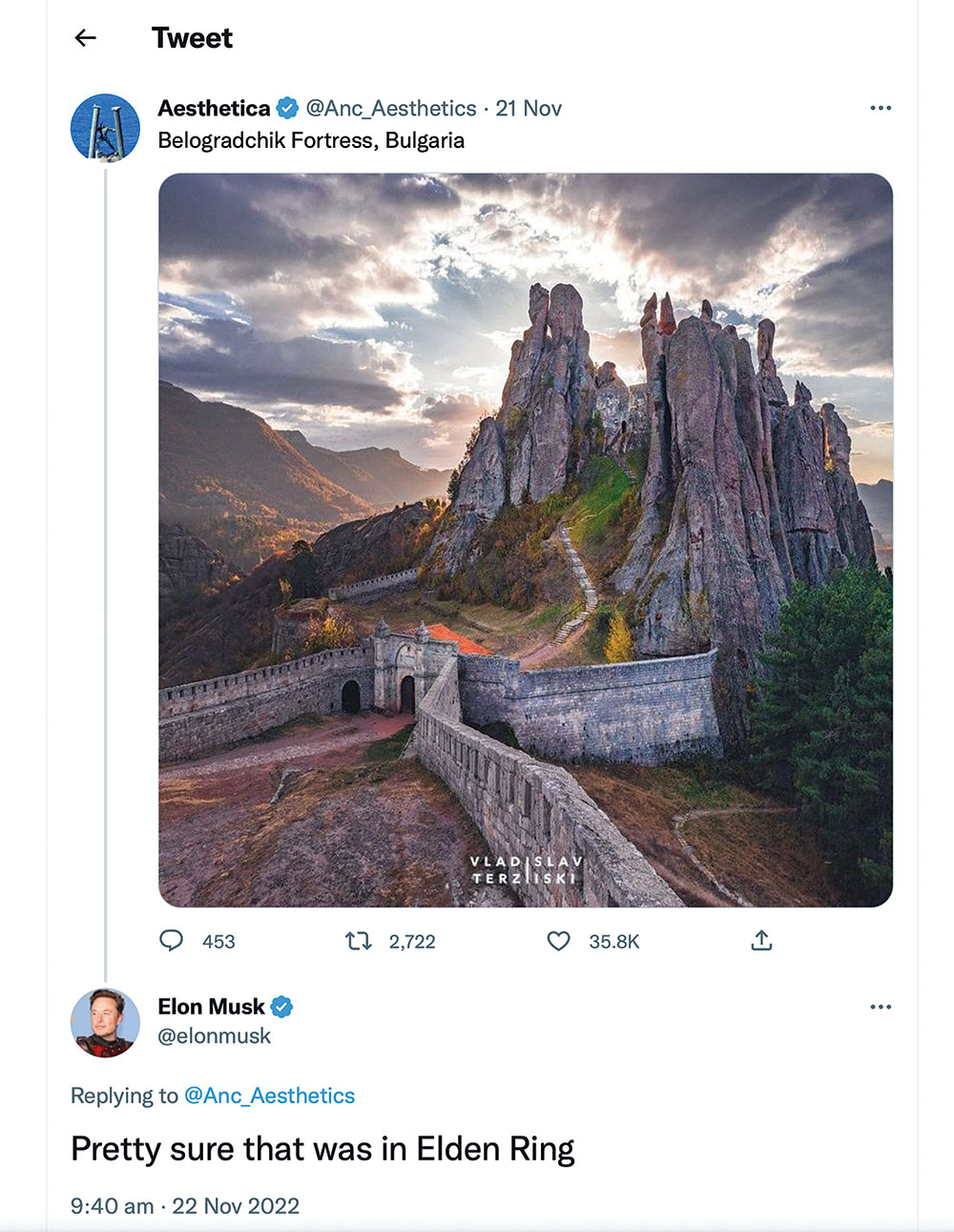 "Pretty sure that was in Elden Ring" Musk wrote, possibly without knowing that the photographer, Vladislav Terziyski, had heavily manipulated his picture, and possibly without realising that difficult-to-pronounce Belogradchik was a real town in a real country outside George R. R. Martin's computer game.

Musk's tweet – in actual fact, one of the many thousands he has sent in recent weeks – snowballed. Bulgarians liked and retweeted it all over the world. The caretaker tourism minister, Ilin Dimitrov, was quick to seize the opportunity to get talked about by inviting the then richest man in the world to visit this country and possibly take in some of its other sites of interest. Understandably, the town council of Belogradchik felt proud.

Belogradchik, in the northwest, is in Europe's poorest and least developed region.

A boutique restaurant in the nearby village of Stakevtsi, called Oná, published an email they allegedly got from a unnamed SpaceX employee announcing a visit was being scheduled for next April and would the establishment "cooperate." Oná said it would, and asked the Belogradchik town council to get at least the main village road paved and change some 200 metres of municipal water piping.

The tourism minister confirmed on Twitter: "Yes... he will come. 24 April."

Apart from the controversies generated as a result of his acquisition of Twitter, Elon Musk is known locally for having thrown a huge party at Bran castle in Romania, the reputed abode of Count Dracula, last Halloween.

With the exception of Musk's Elden Ring remark, none of the SpaceX info has been verified, but the media, including the big TV stations, were very happy to disseminate it.

We at Vagabond encourage anyone who has not been to Belogradchik to go visit – and see for themselves that the Belogradchik Rocks are a fascinating natural and historical phenomenon, not a computer game contraption.