THE UNDERWORLD OF CAPPADOCIA

© Anthony Georgieff
Natural and manmade wonders coexist in Turkey’s strangest area
Aliens had completed the link from the underground city of Agartha, at the centre of the Earth, to Cappadocia in Anatolia. Next they turned their attention to humans. The aliens predicted that Homo Sapiens would not travel farther than the moon over the next few millennia. So they built a shelter where the people of Cappadocia could live in safety.

A few million years earlier – between three and 30, according to different calculations – the eruptions of Erciyes, Hasan and Melendiz Dagları had covered the plateau north of the Taurus Range with a thick layer of ash. Over time, it solidified into soft rock. Later on, some of it eroded and was washed away, forming picturesque stone cones. Today, they are known as fairy chimneys and are an essential part of Cappadocia's scenery. 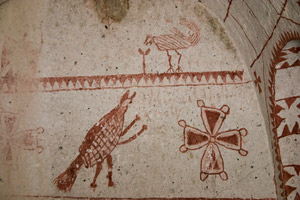 The aliens did not care about the “chimneys”. Beneath them, they carved out subterranean cities – over an area the size of Switzerland. However, events panned out differently. Humans gradually abandoned the underground cities and hollowed out homes and churches in the fairy chimneys and the hills dominating the area, like Üçhisar and Selime. At the end of the 20th Century busloads of tourists, tour guides and rug vendors arrived.

Apart from the Internet, the only place in Cappadocia where you can learn this alternative history of the plateau is the Uluslararası UFO Muzesi. It's easy to spot on the road from Göreme to the rock churches in the Open Air Museum. Its sign displays a fairy chimney and an alien very like the one that, most probably, crashed near Roswell in 1947. 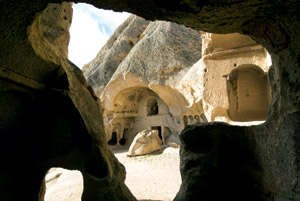 According to local myths, George Lucas drew his inspiration for the stage set of Star Wars from the Selime Monastery in western Cappadocia

It goes back 4,000 years, to the time when the Hittites arrived on the plateau and christened it “the land of the beautiful horses” on account of its fertile soil. According to some theories, they carved the first subterranean cities in the flat parts of Cappadocia. A thousand years later the Hittites disappeared, but people continued using and extending the underground settlements. When the Greek mercenary Xenophon crossed the area at the end of the 5th Century BC, he found them inhabited. Archaeological excavations prove that people lived there when Cappadocia was under Roman rule.

At present, there are nearly 40 known underground cities. The most popular ones are those under Kaymaklı and Derinkuyu. Superficially, they appear like ordinary Anatolian villages lying on a drab plain whose only landmark is the futuristic mosque in Derinkuyu. But the soft rock beneath them conceals a network of claustrophobia-inducing tunnels belonging to subterranean cities. Their compounds descend at least eight levels (Derinkuyu is 60 m deep) connected by cramped narrow passages. They include a complex system of rooms, churches, ventilation shafts, wells, storehouses, wineries and stables – enough for 30,000 people to survive a six-month siege. 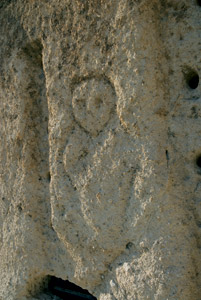 However, the underground cities (some believe that Kaymaklı and Derinkuyu were connected) could not protect Cappadocia. The volcanic ash made the plateau particularly fertile, tempting ambitious rulers. In the 13th Century BC it was coveted by neighbouring Lydia, Phrygia and Urartu; in the 6th Century BC Persia arrived on the scene. Then it was the turn of Alexander the Great, the Roman Empire three centuries later, then the Byzantine Empire, continuously struggling to thwart Arab invasions there. Finally, in the 13th Century AD, the Seljuks appeared – a prelude to the Ottoman invasion. But the Greeks left Cappadocia only in the 1920s, when Turkey and Greece exchanged enclaves.

This turbulent history, and their maddening lack of sunlight, convinced Cappadocia's inhabitants that the underground cities were not the most reliable refuge. Gradually, the people ascended, but out of habit they continued living in troglodytic houses. However, they carved these out of the fairy chimneys – closer to the sun and the clean air.

It seems that living in a cave will always excite the imagination. Hence, hotels and guesthouses in Göreme and Üçhisar offering cave accommodation only have vacancies in winter. 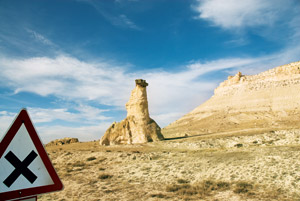 Most of the troglodytic dwellings are abandoned. Generations of Cappadocians hollowed, extended, added several storeys and finally eviscerated them to the point that they are now in danger of collapse. Several landslides have already engulfed the outer walls of some of the churches in the overcrowded Göreme Open Air Museum, whose entrance barrier admits you with an electronic “Hos¸ Geldiniz”, or “Welcome”. Likewise at the monasteries on the rocky slopes of the Ihlara Valley – where there is no barrier, just a friendly warden offering you a cup of tea.

Christianity arrived in Cappadocia in the 1st Century, brought by St Paul himself. The new religion gained ground and Caesarea (present-day Kayseri) became the religious centre of southeastern Anatolia. Both the Arab invasions and their own love of asceticism drove the monks to build their churches and monasteries on the most inaccessible cliffs in the area. 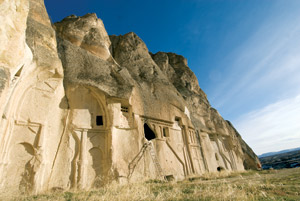 Cappadocia's soft rock exercises a bizarre compulsion on people to continually carve it. The monks soon succumbed to the same obsession that created the underground cities and dwellings in the fairy chimneys. In 964 the Church even banned the carving out of new churches. However, the ban lasted only until 1003.

The results can be plainly seen in the Selime Monastery by the Ihlara Valley. Some of the rooms hollowed out of the rock have fallen in, laying bare a cross section of the inner structure of the troglodytic houses. Rumour has it that they have served as the model for at least one other dwelling. Some say that Selime was used as a backdrop for Star Wars, or at the very least inspired the designers of Tatooine, the home planet of Anakin and Luke Skywalker.

This seems at least as plausible as the tunnel supposed to run from Cappadocia to the centre of the Earth (why the aliens would want to dig to the core of the planet is a question that not even this theory's proponents can answer).


THE LAND OF THE BEAUTIFUL HORSES


Cappadocia's borders are rather changeable, but, according to most guidebooks, it consists of the area between Kayseri in the east, Aksaray in the west, Hacibektas in the north and Nigde in the south. Most tourists head to Ürgup, Göreme and Nevs¸ehir, especially during July and August. During the rest of the year, there are fewer crowds, but you risk finding that most guesthouses and hotels are closed.

The nearest airport is Kayseri. But travelling around Cappadocia is best done by car. It takes two days to drive there from Sofia, stopping overnight in Ankara or Konya (getting to Konya is rather exhausting). Cappadocia covers a large area, so allow three days to get reasonably acquainted.

• You arrive in Kaymaklı or Derinkuyu at 8:30 in the morning, but the tourist buses have got there first? Then visit the less popular underground cities in Özluce and Mazököy.
• To enjoy a real caving experience, pack suitable shoes, old clothes and a torch and go to Zelve. The abandoned monastery complex is on the road from Avanos to Çavusin. What does it offer? Climbing, scrambling down holes in the floor and crawling through a very tight tunnel.
• If you overcome your claustrophobia, you still have to confront your vertigo. Start by climbing up the Üçhisar Hill shortly before sunset, when the canyon and the Göreme chimneys look their best.
• Persevere early the next morning by going up in a balloon. It's a bit pricey, but worth it.
• Test your will power in Avanos. Only if you've tried to study the bas-reliefs adorning the village centre and a tipsy Western tourist whom the locals at a nearby café are examining critically, without bursting into laughter, will you know how difficult this is.
• Test the acoustics in the empty rooms of the Hallaç Hospital Monastery near Ortahisar. You'll probably be alone, but check first and don't do it in front of strangers – it was allegedly used as a lunatic asylum in the past.
• If rock churches suddenly lose their appeal (after the tenth one, they all look the same), visit the monastery and tomb of the founder of the Bektashi order of dervishes, Hacı Bektas Veli, in the village of Hacıbektas.
• Escape the crowds and lose yourself in an eclectic mixture of troglodytic dwellings, Greek stone houses, a small underground city and the most delicious pide in the region in the village of Guselurt.
• Check the ancient Cappadocians' knowledge of winemaking and go wine tasting at Ürgup.
• Walk. Cappadocia is one of the best places for long and short hikes, as long as it's not too hot. There are several good treks starting from Göreme: to Çavusin via Gulludere and to Üçhisar via Guvercinlik.