The Acropolis seen from the Philoppapou Monument

Athens is a place that simultaneously feels very old and very new. It is a place of ancient monuments and of drab, unremarkable post-1940s streets with white houses and greying apartment buildings, with bustling street traffic and elderly people slowly strolling along. There are tourist traps and tavernas that seem unchanged since  the 1960s, intelligent graffiti and classical monuments which laid the foundation of Western art, among the pestering pigeons and of the pageantry of the Evzones national guard.

When most people visit Athens, they do it for the Acropolis, the hill rising above the sea of modern white houses. In the 5th century BC, this hill was the heart of ancient Athens, the cradle of democracy and Western civilisation. Familiar from thousands of photos and films, the Parthenon and the Caryatids may look mundane and overrated, but this impression is most often due to the crowds that throng the site most of the time, constantly talking and vying for the best selfie spots.

Visit early in the morning and you will see a completely different Acropolis. A group of solemn soldiers march down the slippery steps of the Propylaea gates, after having raised the national flag on the summit. The rising sun illuminates the exquisite columns of the Parthenon, and the graceful faces and bodies of the Caryatids. In the early morning, you have both the space and the tranquility to really absorb and appreciate the monuments, to meditate on their noble proportions which embody the idea of man as the measure of all the universe.

As amazing the Acropolis is, it is far from the only surviving monument from the time when Athens was the centre of the world. Below the hill, covered with greenery and mostly in ruins, is the ancient city's agora, where the Athenians used to trade, gossip, and conduct politics. The most impressive structures here are the beautifully restored Stoa of Attalos, which now serves as the museum of the site, and the 5th century BC Temple of Hephaistos that has survived the centuries almost intact, as it was used as a church.

Farther from the agora, near Thissio metro station, is another piece of ancient Athens that attracts smaller crowds, but deserves a visit. The Kerameikos neighbourhood used to be a major burial ground for the Athenians; its sad and beautiful tombstones now mingle with lush greenery, which is home to a thriving colony of tortoises. 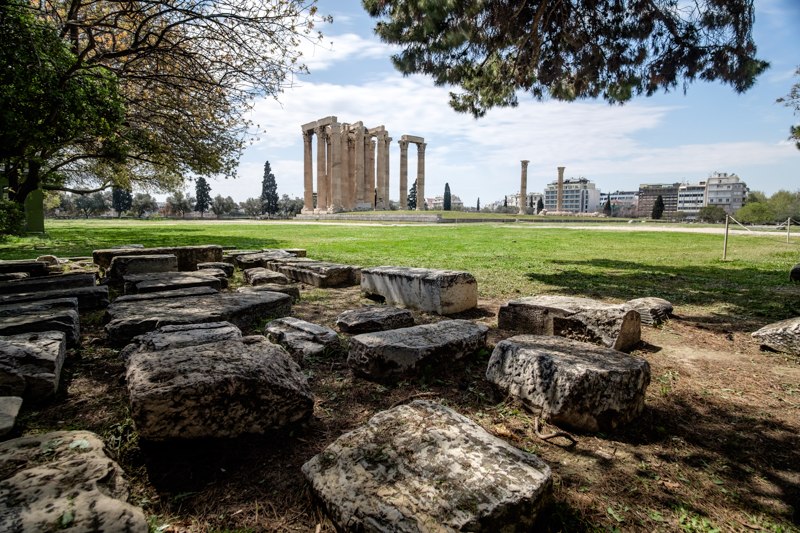 The remains of the Temple of Olympian Zeus

Classical Athens declined after the catastrophic war with Sparta in 431-404 BC, and never recovered. Yet, it remained an active intellectual centre for centuries, including during the Roman rule. From these times are left several monuments that are interesting not only for their age, but also for their heavier proportions and larger sizes, demonstrating the power of the empire. The Philoppapou Monument on the Mouseon Hill is a lavish tombstone to a man whose name would otherwise be completely forgotten; the vistas towards the Acropolis are a bonus. The Roman forum at the foot of the Acropolis impresses with its size, although the number of souvenir shops and touristy restaurants detract from the spirit of the place. Of the monuments here, the most charming is the Tower of the Winds, a polygonal structure combining sundials, a water clock and a weather vane. Farther from the hill rise two buildings constructed by Hadrian, the Roman emperor who was an enthusiastic admirer of Greek culture. His marble arch is a cacophony of architectural styles, and the colossal Temple of Olympian Zeus continues to awe with its scale, although only a handful of its original 104 columns still stand.

Athens, however, is much more than its ancient heritage. The city spent the Middle Ages and the Ottoman rule as a backwater, but it reinvented itself with vigour after 1834, when it became the capital of independent Greece.

A network of squares and streets, lined with neoclassical buildings, engulfed the old Ottoman buildings and the ancient ruins. They grew, spread, and adopted architectural styles from Art Deco to modernism, forming their own centres of prominence, such as Syntagma Square with the Parliament and the evzones, the Archaeological Museum, the Academy. These locations of official power and knowledge are joined by the colourful, fragrant life of the central market, the hustle of the Monastiraki neighbourhood with its tourists, street vendors, and immigrants, and the labyrinth of the Psyri neighbourhood that oscillates between picturesque abandonment and gentrification. Add to this the Gazi neighbourhood, an artsy area that appeared recently around the old gasworks, and you end up with a city that constantly reinvents itself. 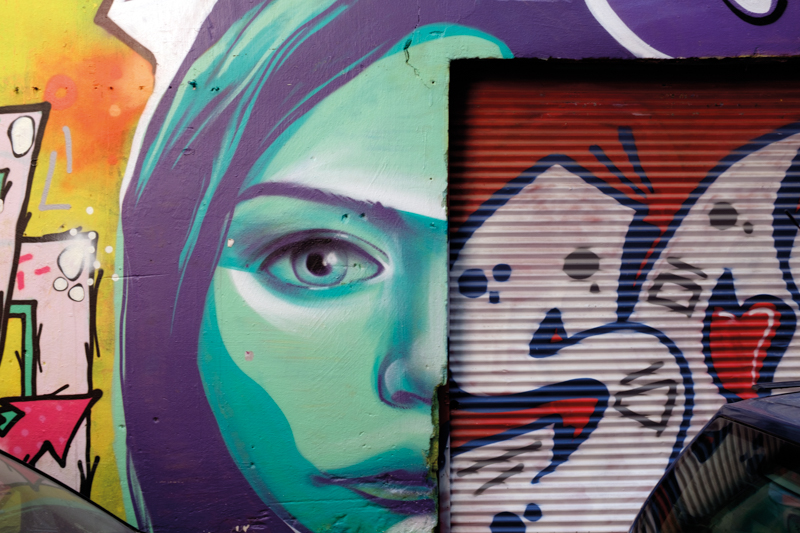 The new Athens already has its own ghosts of the recent past, such as the venues constructed for the 2004 Summer Olympics. Ambitious in scale and architecture, they are now a surreal zone of facilities, both abandoned and still in use, spread over a vast area, evoking a sense of loss and emptiness in the visitor.

Athens is a city that has seen glory and failure, but has managed to survive, and to become the ultimate experience for the traveller seeking not only world-famous sites of interest and selfie opportunities, but a place with its own soul. 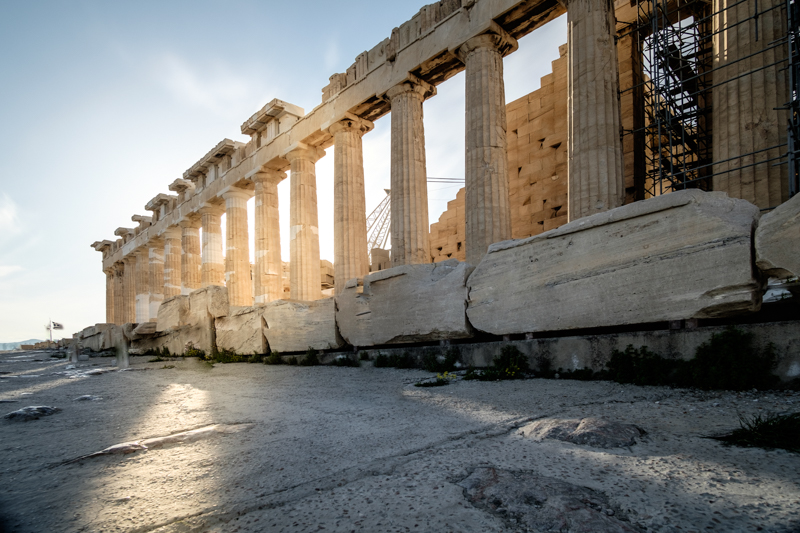 Early morning on the Acropolis: beautiful light and (almost) no other tourists to mess around. The current restoration project of the temple is to return as much as possible stones to their original places, and to deal with the damage done by previous restoration attempts 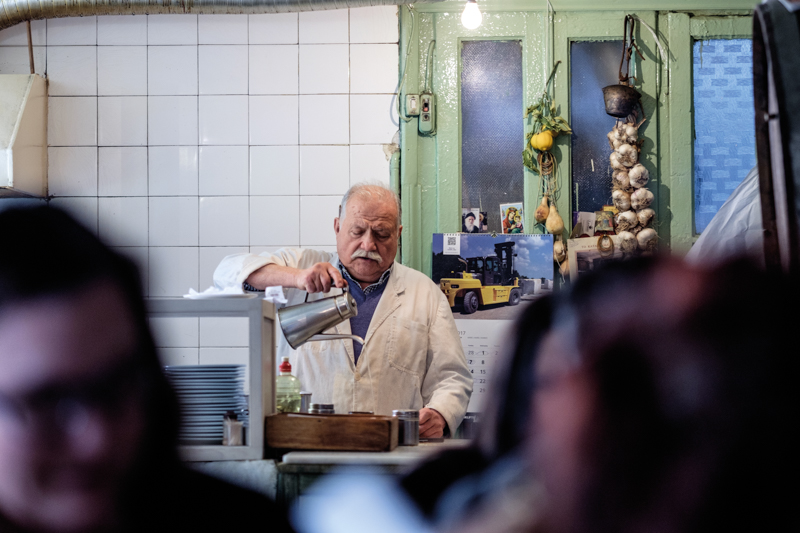 This old-school taverna at the Central Market sticks so stubbornly to its short menu, draft retsina and no-nonsense demeanour that even chance tourists feel compelled to oblige its unwritten rules 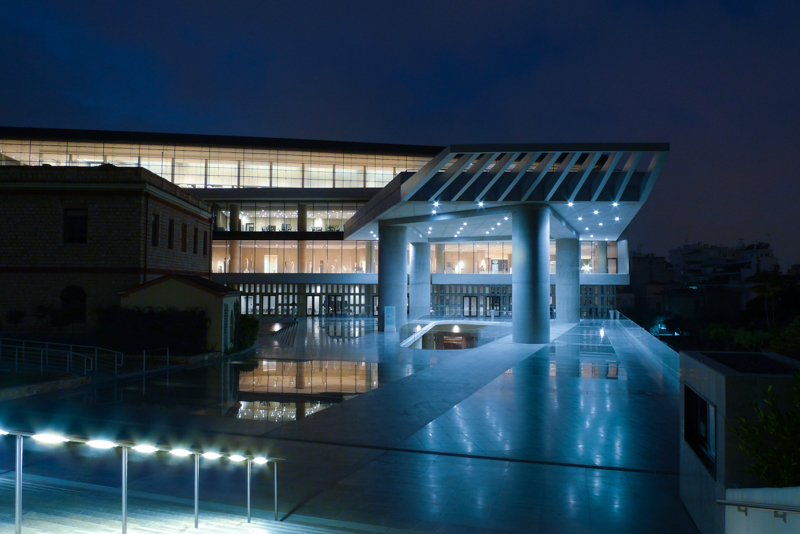