ROUND BLACK SEA IN 3 VAGABONDS. PART 1: THE HISTORY

The mouth of the Bosporous into the Black Sea: This is what Jason and his argonauts supposedly saw on their quest eastwards

Head off on life-enhancing journey with our series of articles dedicated to the history, nature and cities of Europe's least known sea

It encompasses six countries, with wide rivers, majestic mountains and splendid beaches, and the remains of ancient civilisations and modern developments. Peopled with adherents of the three Abrahamic religions, and redolent of times of splendour, confrontation and tragedy, the shores of the Black Sea combine different nations, geographic and climatic features, and history. In a series of three articles, we will cover the most exiting sites in a region that is still underexplored by Western travellers. We begin with the history of the Black Sea.

Until not very long ago (in geological terms) the Black Sea was not a sea, but a huge lake collecting the waters of some of Europe's largest rivers: the Dniester, the Dnieper and the Danube. Where the Bosporus is today, a land bridge connected Asia and Europe. About 7,000 years ago, the waters of the lake reached too high a level and overflowed into the Mediterranean in a catastrophic event that created the Bosporus and the Dardanelles straits, and supposedly inspired the Old Testament story of the Flood.

This geological event defined the history of the region, as it transformed the Black Sea into a vital trade and military route between East and West, North and South: the playground of mighty empires, nomadic tribes and enterprising merchants.

After the sea appeared, complex societies engaged in long-distance trade were established on its shores. The people buried in the Varna Chalcolithic necropolis, for example, were the first in the world to turn gold into jewellery, 7000 years before our time. 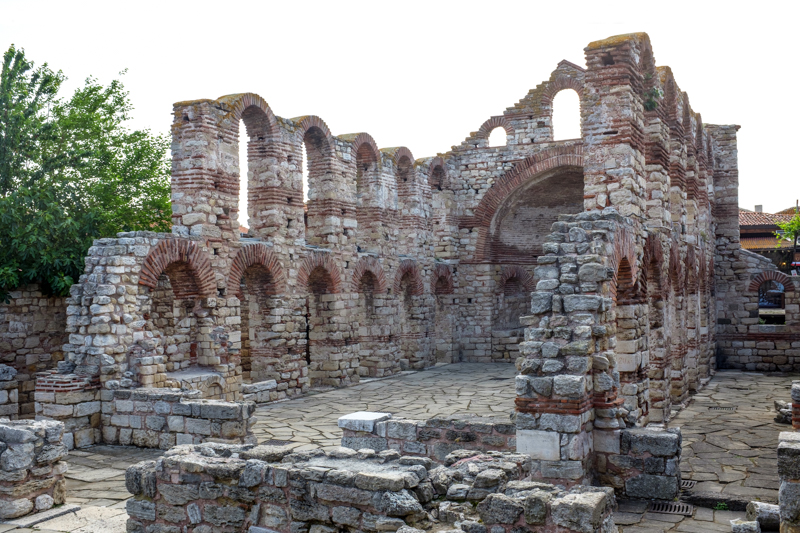 Built in the 5th century AD, the Old Bishopric of Nesebar is a witness of the times when the town was a centre of trade, culture and politics

In the 7th century BC, the ancient Greeks started colonising the Black Sea, lured by its grain-rich plains and the natural resources of its mountains. They settled all over and left the memory of their endeavours and exploits in the myth about Jason and the Argonauts. The mythical Colchis was actually a real place, modern Georgia.

The ancient Greeks had to fight stormy waters and harsh weather in what they called Pontos Axeinos, the Hostile Sea. Once they learnt to navigate there, they changed the name to Pontos Euxeinos, the Hospitable Sea. Whether it is hostile or friendly is a matter of an ongoing debate. The Black Sea does not have sea storms of Atlantic or Pacific dimensions, nor does it have tsunami. Its tides are minuscule, just a few inches. Yet it is treacherous – to a degree that through the centuries its bottom has become a huge ship cemetery. And even in summertime its dangerous currents claim many lives of holidaymakers.

The Greek colonies on the Black Sea still remain, such as Sozopol, Nesebar and Varna in Bulgaria, Constanța in Romania, Odessa in Ukraine, Istanbul and Trabzon in Turkey.

The rock monastery of Sumela, near Trabzon, is a reminder of the times when the Black Sea's southern shores were inhabited by Greeks. It was established in the 4th century and was abandoned in 1923, after the exchange of populations between Greece and Turkey

While the Greeks were colonising the Black Sea, they had to deal with two of ancient Europe's most populous nations, the Thracians on the western shore and the Scythians to the north. At a later point, both Persian King Darius I and Alexander the Great set out to conquer them, revealing how important they were in ancient geopolitics. The Romans followed suit, establishing their grip over the region for several centuries.

And yet, the Black Sea remained a relative backwater until an old Greek colony on the Bosporus became the new capital of the Roman Empire, in 330. Constantinople tapped into both the maritime trade and the inland traffic between Asia and Europe, becoming a hub of political, economic and cultural power for millennia.

Continuous waves of so-called Barbarians storming into Europe through the lands north of the Black Sea soon tested the might of Byzantium. The Huns, the Avars, the Hazars, the Pechenegs, the Vikings and many others all used the Black Sea as a gateway into Europe. Some of them left only the memory of plunder and riches, but others, like the Bulgarians, settled in the area. 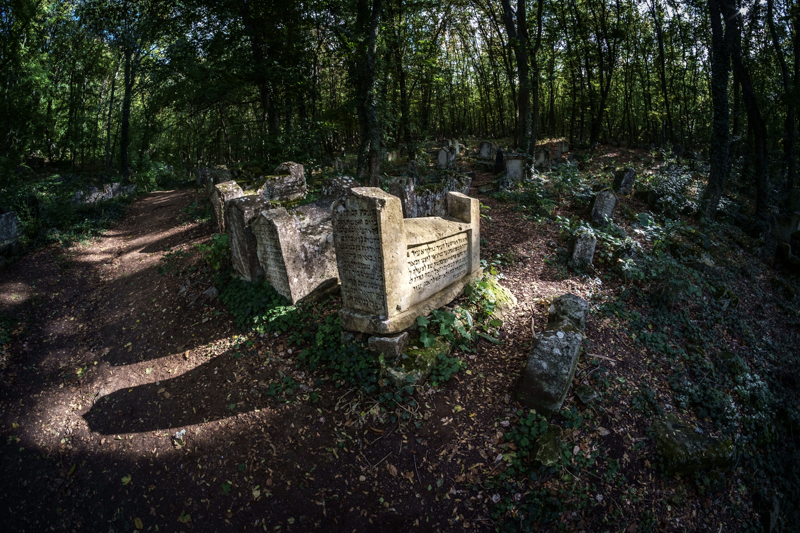 In the 8th-9th century Judaism became the official religion of the Khazars. A small community of Karaites still lives in Crimea. It was even spared the Holocaust as the Nazis did not consider the Karaites Jewish by blood. Their cemeteries still survive

The Black Sea was also a place of refuge and security. When the Fourth Crusade took Constantinople, in 1204, putting an end to the Byzantine Empire, defiant Byzantine nobles founded the Trebizond Kingdom, protected by the impregnable mountains around.

Soon afterwards, the Black Sea got a new master. The Mongols were infamous for their brutal warfare, but they were clever administrators. The taxes they collected on international trade in their ports were significantly lower that those paid by European merchants at Alexandria for goods from the Far East such as spices and silk. Consequently, trade poured into the Black Sea, which became an end point of the Silk Route.

When the Ottomans established their grip over the Black Sea and Constantinople, in the 15th century, Europe was horrified, but trade continued and not long afterwards a new pretender to mastery of the sea emerged: Russia. 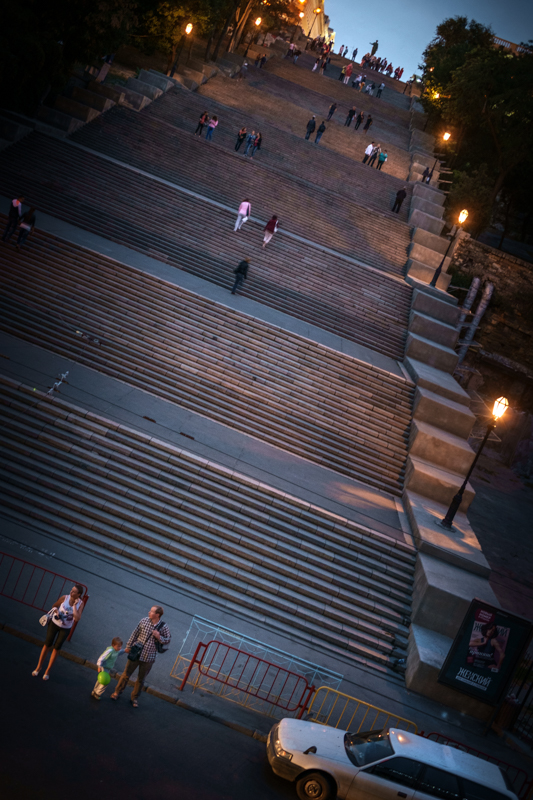 Founded in 1794 by Russian Empress Catherine the Great as a Russian stronghold on the Black Sea, Odessa still dominates the region

Landlocked between Central Europe, the cold Arctic Ocean, the expanse of Siberia and the internal Caspian Sea, Russia needed ports that would not freeze in winter. The Black Sea had what they wanted, and the straits would provide vital access to the Mediterranean. In the 17th-20th centuries, Russia and the Ottoman Empire fought 11 wars over the straits, the First World War included. These wars had a tremendous impact on the area and continue to play a role in modern geopolitics. One of their effects was the restoration of the Bulgarian state after five centuries of Ottoman rule, in 1878.

The Black Sea was also a military theatre during the Second World War, and during the Cold War it was a border zone between the Soviet Union and its satellites, Bulgaria and Romania, and NATO-member Turkey. The break-up of the USSR, in 1991, calmed the region, but only to a certain extent, as there was violence in Abkhazia in 1992-1993, a war between Russia and Georgia in 2008, and the Russian annexation of Crimea in 2014.

However, history is not only about wars. Travelling is the best way to discover the rich past of this region; its diverse peoples, cultures and historical remains.

Round the Black Sea in 3 Vagabonds Part 2: The Nature 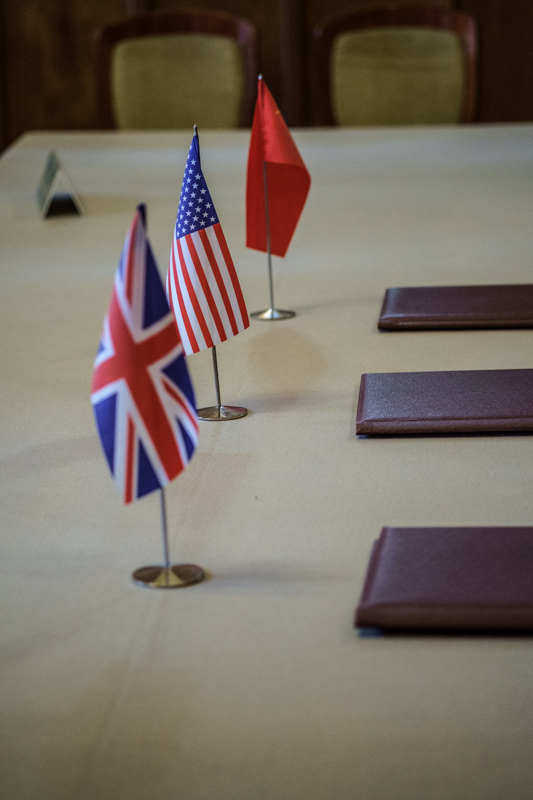 In February 1945, Joseph Stalin met with Winston Churchill and Franklin D. Roosevelt in the former villa of the Russian emperor at Yalta. Their conference defined the world after the end of the Second World War. The villa is now a museum dedicated to both the Russian royal family and to the Yalta Conference 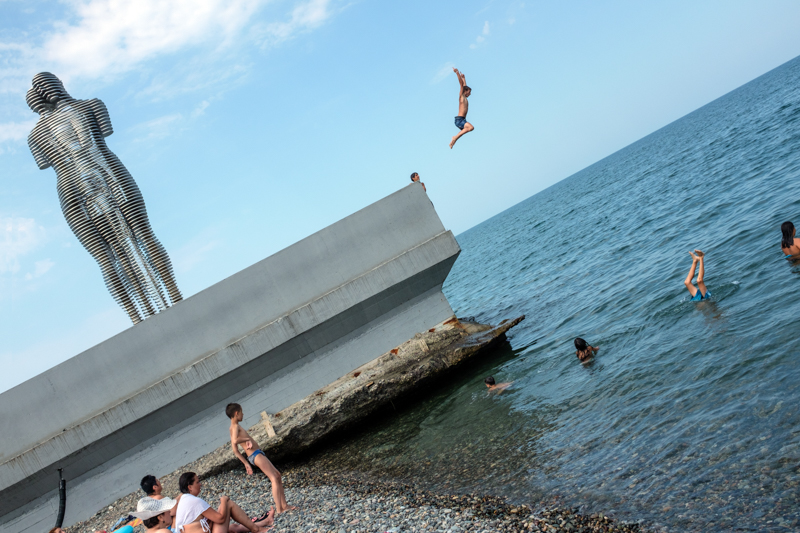 Batumi is Georgia's main city on the Black Sea coast. It combines old history as a part of ancient Colchis where the Argonauts sought the Golden Fleece, Soviet-era buildings and new developments including skyscrapers 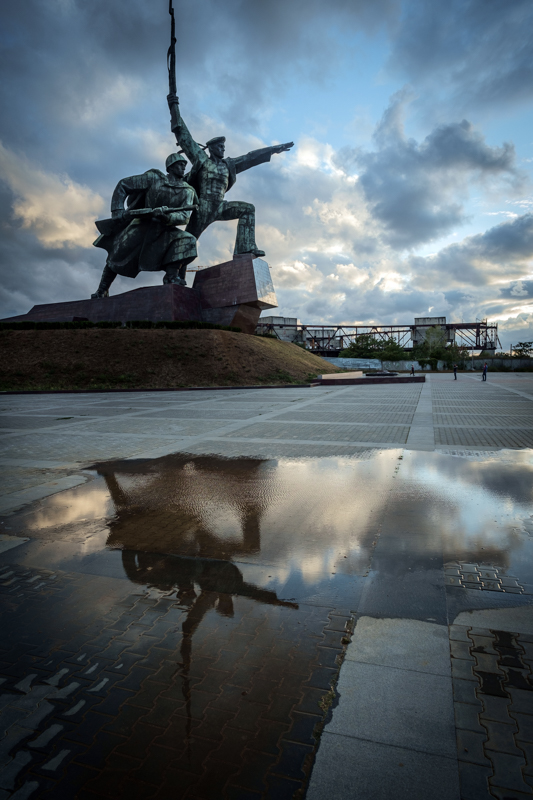 Crimea during the Second World War was the theatre for fierce battles. Today its shores are crammed with Soviet-era monuments 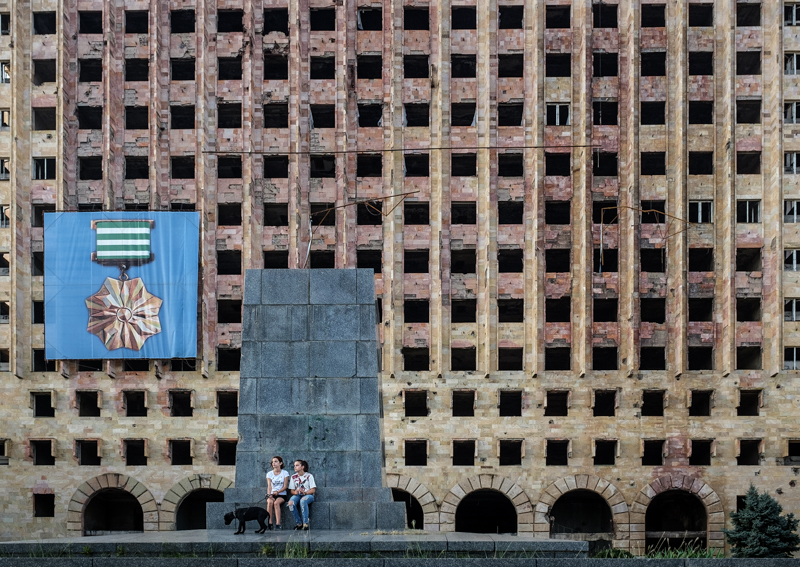 The Soviet-era parliament building of Abkhazia has not been restored from the damage caused by the 1992-1993 fights. Sukhumi is now the de-facto capital of the region 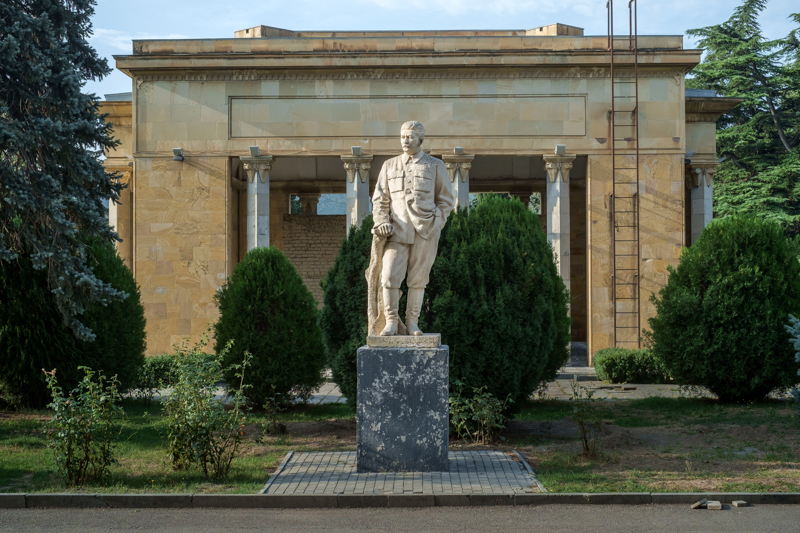 Small Georgia has produced one of the world's most notorious individuals, Joseph Stalin. After he took control over the USSR he oversaw the country's rapid industrialisation, but also prompted a brutal famine in Ukraine, the construction of Gulags for political opponents. Initially an ally to Hitler, he won over Nazi Germany and established the USSR as a nuclear power. His museum in his home town in Gori is never empty of visitors 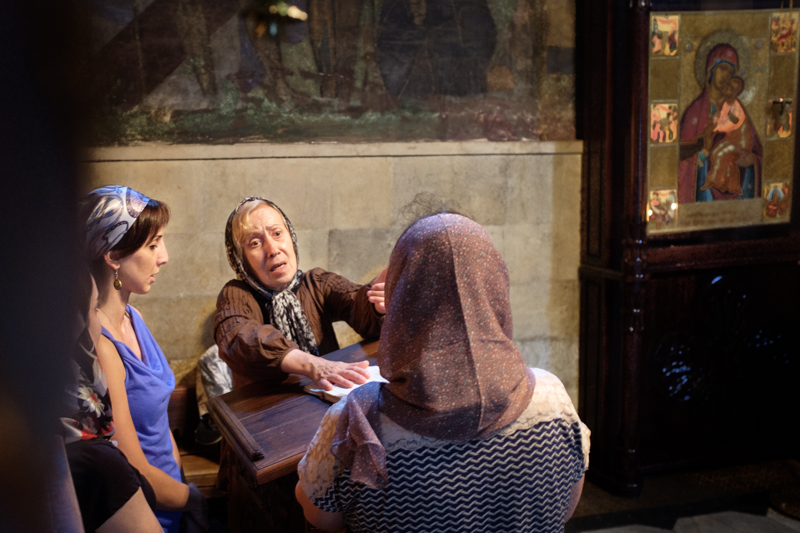 Georgia is one of the oldest Christian nations in the world. Christianity became the state religion in 319, becoming a pillar of national identity 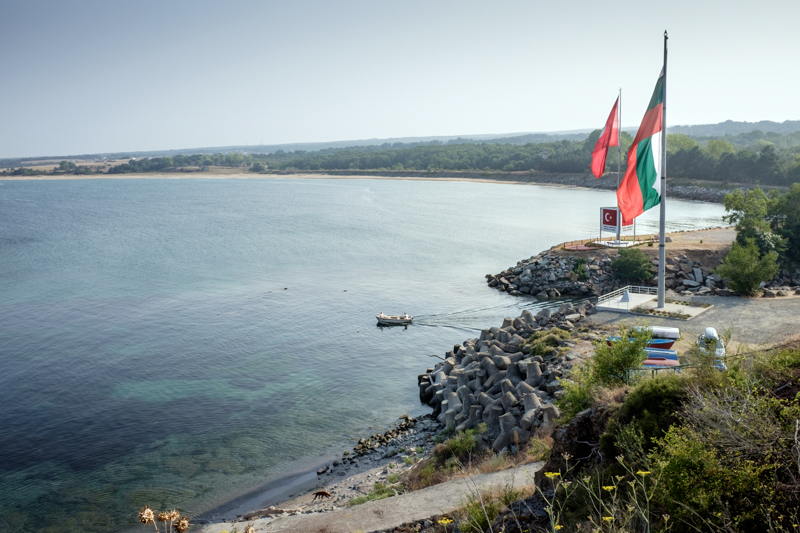 The border between Bulgaria and Turkey where River Rezovska flows into the Black Sea. As the river's mouth defines the countries' maritime border, and the catch of prized turbot, in the 1980s Bulgarians tried to gain advantage by trying to divert the river's course by placing tetrapods in it. The Turks followed suit. Tension escalated, almost leading to an armed conflict 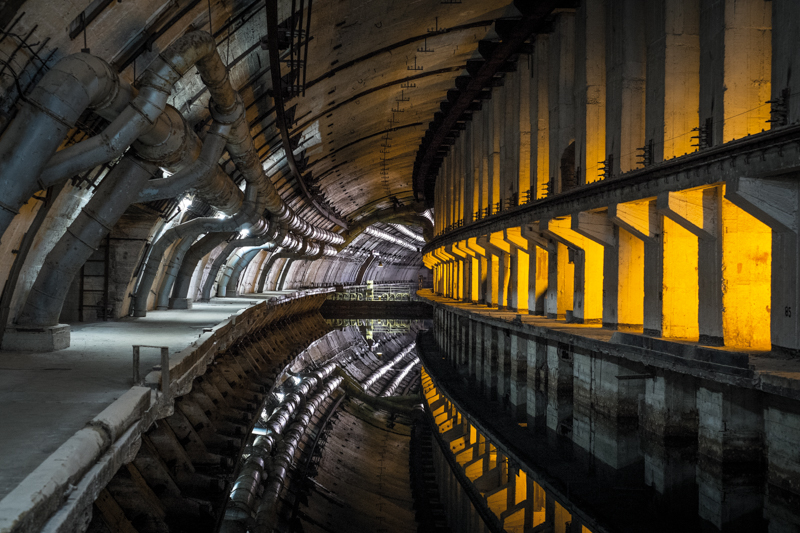 During the Cold War, the Black Sea was heavily militarised. A fjord near Balaklava in Crimea was a secret base for submarines. In 2003, it was turned into a museum. After Russia's annexation of Crimea in 2014, the Russians reportedly consider reopening it

Haghia Sophia Cathedral epitomises the history of the Black Sea. It was built in the 6th century by Emperor Justinian as a monument to Byzantine power. A building of ingenuity and beauty, it remained unsurpassed for centuries in size and magnificence. After the Ottomans conquered, in 1453, it was turned it into a mosque, and its architecture spawned a whole new style in Ottoman construction. In the 1920s, the building became a museum 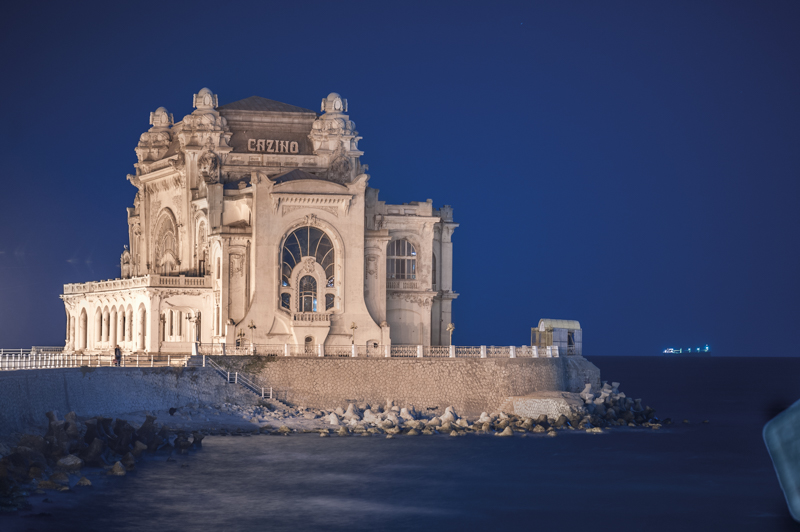 The abandoned art deco casino in Constanţa, Romania. The successor of ancient Tomis, the city, one of the biggest along the Black Sea coast, flourished in the interwar period 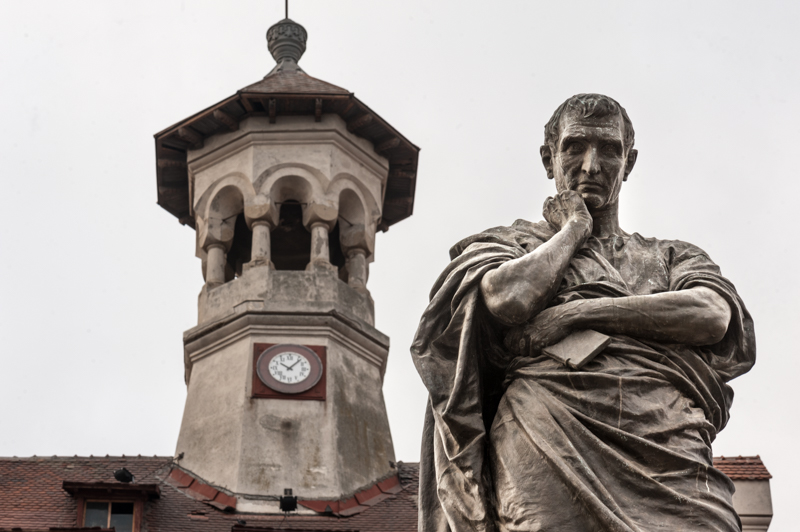 For the ancient Romans, Constanţa felt like the end of the world. When the poet Ovid was exiled there, in the 1st century AD, he complained of the harsh climate and the uncivilised inhabitants in the brilliant verses of his Tristia, or Lamentations. A statue of him in central Constanţa stands to honour him