Rich history and ethnic diversity have created many temples in Sofia

Religion is part of everyday life in the capital city of Bulgaria – and part of the city landscape. Sometimes it stands apart in the impressive bodies of cathedrals or tall minarets. Other times it blends in with the surroundings in an inconspicuous gray building, with small notices inviting passers-by to come in and listen to an Evangelist sermon or get some White Brotherhood literature. Diversity is just below the surface in a complex mix of cultural and ethnic influences. To get to know Sofia's temples is to dip into the millennia-old history of Bulgarian lands. The turbulence of the 20th Century political twists left obvious scars. Confiscated church property, bans on religious practice and eroding faith contributed to the casual, secular attitude of Bulgarian citizens to mainstream religions. But the temples survive and carry on – you need only take a closer look see the life in them.

Around the beginning of the 20th Century, the Bulgarian Synod decided to move the Theology School from Samokov to the capital. The Sofia City Council had donated a plot of 12 acres for the building of the Sofia Seminary on a bald hill south of the town. Friedrich Grünanger, who designed more than 15 public and private buildings in Bulgaria, undertook the project and incorporated elements of Byzantine style and Bulgarian Revival church architecture. 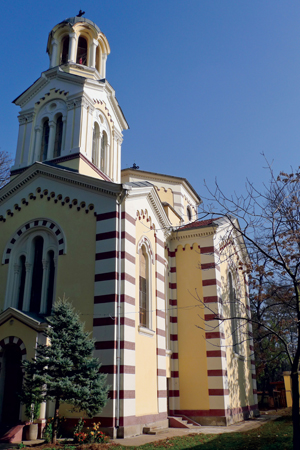 Contributions for the construction flowed quickly. The seminary was completed in just one year and opened for classes in 1903. After another donation from the city council, the plot grew to 24 acres and was populated with rare trees and plants, given to the seminary by Knyaz Ferdinand.

The school's peaceful atmosphere was disturbed by the Balkan wars and the First World War – the army recruited students, the building was turned into a military hospital. Times of political unrest followed and the seminary moved back and forth several times. In 1950 the move was made more permanent – Prime Minister Valko Chervenkov wanted the seminary building turned into a Communist Boy Scouts' Palace. The Sofia Seminary was united with the one in Plovdiv and moved close to the Cherepishki Monastery in the Stara planina mountain. It returned to its premises as late as 1990 and currently teaches about 300 students. The buildings have been renovated, the beautiful park with century-old trees spruced up. It is open to the public every day, along with the seminary church St Yoan Rilski.

The Church of Seventh-Day Adventists

Adventism was unknown in Bulgaria before 1891, when a group of German settlers arrived in Dobrudzha and brought this new branch of religion with them. It took some time to organise the first church. In 1912 Bulgaria's first Adventist pastor, Georgi Kadalev, who had studied at the Advent college in Fridensau, Germany, took charge of the Sofia congregation, which numbered eight. After this slow start, numbers grew to 205 people in 1924, which necessitated the building of the first church at 10 Solunska St, where it still stands today. The church also housed a publishing house, New Life, which distributed religious literature and helped to attract new members. 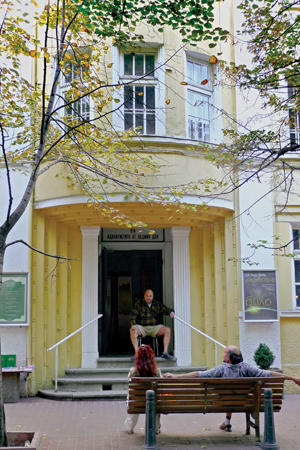 After the Second World War, there were Adventist churches in Sofia, Stara Zagora, Gabrovo and Tolbuhin (now Dobrich). A school and a summer camp for children in Svoge were part of the charity work of the church. Communist repression closed down the publishing house and the school. The church property was nationalised and many Adventist pastors and ministers were removed from their ministry or imprisoned. Bulgaria's Adventists were isolated from the World Adventist church until 1990 when, along with many other non-traditional religious movements, the Adventist church had to be registered again at the Religious Confessions Directorate. It quickly gained momentum once more and at present there are more than 7,300 Adventists and 116 churches throughout Bulgaria.

The Evangelist Methodist Church "Dr Long" had a humble beginning, when just 11 members met in the dining room of a school, in August 1909. Although the parishioners quickly grew in number, the lack of a church building remained a problem. Bulgaria went through three wars in 10 years and finances were at an all-time low.

It was not until 1922 that the church secured a plot on Narodno Sabranie Square. The Bulgarian Holy Synod, the ruling body of the official Eastern Orthodox religion, rejected the building project as it didn't want the religious competition to be so close to the centre of power. Instead, the Methodist Church was given the site of the old fire station at 86 Georgi Rakovski St. The new building, constructed to an Austrian design, eventually earned the status of a Monument of Culture for its fine architecture.

The church was consecrated in 1925 and named after Dr Albert Long, head of the American Protestant missions in Bulgaria. He translated the Bible into modern Bulgarian with the poet Petko Slaveykov. Like most of the smaller denominations, the Evangelist Methodist Church was dispersed under the Communist regime and recovered only in 1994. Some of the old Methodist families are once again part of the congregation, but there are also a lot of new members.

The Bible Baptist Church of Sofia is at 60 Obikolna St in the Ovcha Kupel district of Sofia. Another way to describe the location is "next to the local Chinese restaurant." It may not sound very promising, but the Owens family, who founded it, only arrived in 2003. Their mission to win over the faithful attracted some bad publicity in 2009 because of their way of proselytising, using a short comic detailing the punishment that the sinner could expect in this life and the next. The Bulgarian press picked up the publication, which was distributed in taxis, and ran headlines accusing the church of being a sect. The controversy died down after a while – people of different denominations agreed that the story-line of the comic basically came from Bible tenets and the Bible Baptist Church was well within canon. 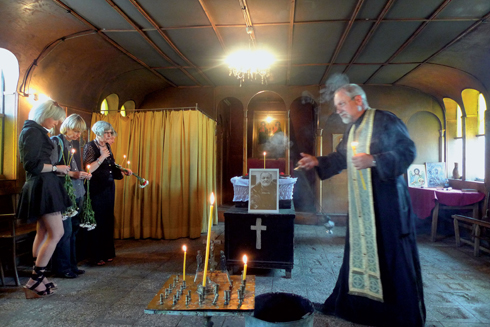 If those who bury their loved ones in the graveyard of Bakarena Fabrika want to light a candle, they have to go into a low shed that serves as a church. Inside, several icons are hung on the walls or placed on tables, there is only one candelabrum and the seats are rickety old chairs and benches ‒ a far cry from the beautifully frescoed, highdomed church with gilded icon frames that is the Eastern Orthodox standard. Every month there are 200-250 burials in the graveyard and each time the coffin with the body has to be placed on an old wooden chest with a white cross haphazardly painted on it, so that the grieving relatives can take their farewells.

This arrangement is temporary ‒ only until the real St Archangel Michael is built. The foundation stone of the church was laid in June 2009. In February 2010 the Sofia City Council decided to add 100,000 leva to its funding. This might be enough to finish the church, but the graveyard of Bakarena Fabrika isn't the only one with such problems. In Malashevtsi a similar miserable shed stands in for the proper church, whose construction started 10 years ago and has yet to reach roof level.

The Chapel of the Annunciation of the Lord 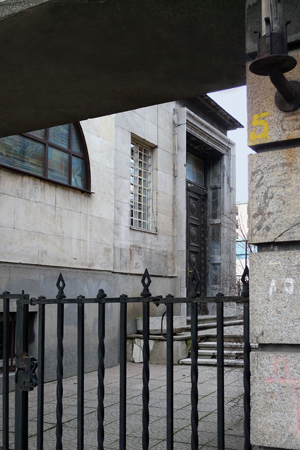 The small chapel of the Annunciation of the Lord at 5 Oborishte St is part of the parish of St Joseph, the Roman Catholic Cathedral in Sofia. The main priest there is the Apostolic Nuncio to Bulgaria, currently Monsignor Janusz Bolonek. Specifically geared toward English-speaking Roman Catholics, the chapel has mass in English on Sunday at 11:00 and can barely contain the congregation, both foreigners and Bulgarians, on the larger holidays.

The Catholic church of St Francis of Assisi, at 7 Prof. Asen Zlatarov St, was built as far back as 1899. It is one of the two Catholic churches in Sofia which were funded by the Austro- Hungarian emperor Franz Joseph – the other being the old cathedral of St Joseph, destroyed by Allied bombing in 1944. Both churches were named after the emperor for his generosity.

Today mass is said regularly in the church. In the yard is the monastery of the Holy Spirit, the headquarters of the Order of Discalced Carmelites, a strict monastic order, whose history in Bulgaria is quite turbulent. The order moved to this location in 1940, five years after its creation, but the sisters were first chased away by the violence of the Second World War, and then persecuted for their religious practices during the Communist rule. Their small houses having been destroyed, they went to live inside the church and built their cells there. Only in 1996 was it possible to start building proper living quarters. Now the first stage of restoring the monastery is complete, but there is still a lot to be done – a library, the monastery church, and an infirmary.

Before becoming one of Sofia's largest churches, St Sedmochislenitsi, at 25 Graf Ignatiev St, was a mosque. Sultan Suleyman the Magnificent ordered it to be built on a plot belonging to Rila Monastery. It was completed in 1528, but it seems the history of the site goes back farther. In 1901, during excavations, archaeologists found the remains of a 6th Century Christian church and an even older sanctuary of Asclepius. 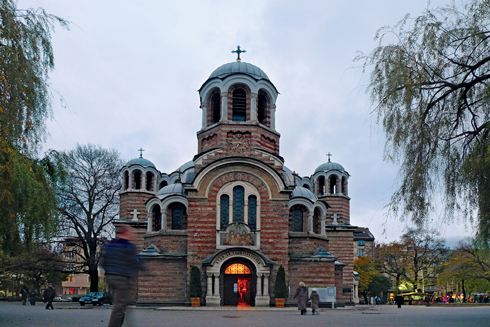 The architect of the building is reputed to be Mimar Sinan, perhaps the greatest Ottoman builder. The minaret, made of granite from Vitosha, was black, hence the nickname "The Black Mosque." According to another story, the name was coined after Bulgaria's liberation, as the cellar of the mosque served as a prison and witnessed the torture of many people.

At the end of the 19th Century, the burgeoning population of Sofia required a new church. Bulgarian politician Petko Karavelov, who had spent some time imprisoned in that very building, suggested that "The Black Mosque" be consecrated as a church, because the building was elegant and airy. After some opposition his suggestion was accepted and the Russian architect, Alexander Pomerantsev, who had already been commissioned to design the Aleksandr Nevskiy cathedral, drew up the plans. When it came to naming the church, Petko Karavelov prevailed again. The church was called St Sedmochislenitsi, the collective name for the inventors of the Slavic alphabet, Cyril and Methodius, and their five students.

In 1903 the Sofia metropolitan bishop Parteniy consecrated the church. Painting it took much longer because it was financed by donations, and was only completed in 1996. St Sedmochislenitsi is now a popular spot for christenings and weddings. The park around the church is a favourite with teenagers, who often drink beer there on summer nights.