When you arrived in Sofia, what was the first place your Bulgarian friends took you to? They probably showed you St Aleksandr Nevskiy Cathedral, took you for a stroll along the yellow brick road from the National Assembly to the Stalinist "Largo," or did you go shopping in one of the new "malls," the hit of the Bulgarian economy? Maybe you already tasted rakiya and shopska salad, or been to the chalga, your first experience with Bulgar pop culture?

But no one took you to Zaharna Fabrika, or Sugar Factory.

Perhaps with a good reason. A few years ago the area became a killing field. A band of Gypsies attacked a local restaurant where some Bulgarians were celebrating a friend's school graduation. A university professor was murdered in the process, and Bulgaria learned that life in Sugar Factory could be as risky as an unprovoked attack in some Latin American shanty town. The only difference was that in Rio fightings are between rival drugs gangs, while in Sofia it was between Bulgarians and Roma squatters.

The Sugar Factory suburb may be infamous but, as anyone who dares branch off Slivnitsa Blvd after the bridge at Zaharna Fabrika railway station will discover, it also has the charm of a place where time has stopped.

The cafés and small shops, the façade of the old cinema, the cars and the washing hanging from windows: everything looks like the last 20 years have bypassed the area, speeding down the renovated Slivnitsa Blvd. Sugar Factory is probably Sofia's only neighbourhood where the spaces between the blocks of flats, instead of cars and building sites, are still filled with tall shrubs, verdant trees, green grass and the attempts of amateur gardeners to grow flowers.

This is also the site of Bulgaria's only "home" for retired artists. An institution founded years ago by the Culture Ministry, it has little resemblance to old folks homes in the West. Upstairs from the local cinema – long disused but with the sign still on – it is a place where actors, artists and singers with no relatives to care for them spend their sunset years in modest misery.

But the main reason to visit Sugar Factory is, well, the sugar factory.

It has not been functioning for decades. Some of its halls were used as warehouses by various companies, and the Bulgarian National Television housed its film archive there, before the building became dangerous. But in spite of the decay, the red brick façade with its high, almost Gothic windows and crenelated roof, which you can see from Slivnitsa Blvd bridge, is the most beautiful old industrial building in Bulgaria.

Built in 1898 beside the railway line to Kyustendil on the outskirts of the city, it was the project of several enterprising foreigners. Increasing affluence had led to a boosted demand for the luxuries of life, including sugar. Bulgaria had never grown sugar beet, and so every lump of the sweet substance had to be imported. At the end of the 1890s the government approved the offer of a Belgian company, chaired by Baron Van der Straeten-Solvay, to plant sugar beet near Sofia and build a processing factory as part of a concession.

Within a few years the sugar factory became one of the major employers in the capital and many workers were even given corporate housing. In 1914, however, things started to go wrong. The First World War broke out and four new sugar factories opened in Bulgaria. Strong domestic competition and the fact that Bulgarian beet was not sweet enough took their toll. The factory struggled against its fate for over a decade but eventually had to close down in 1925. 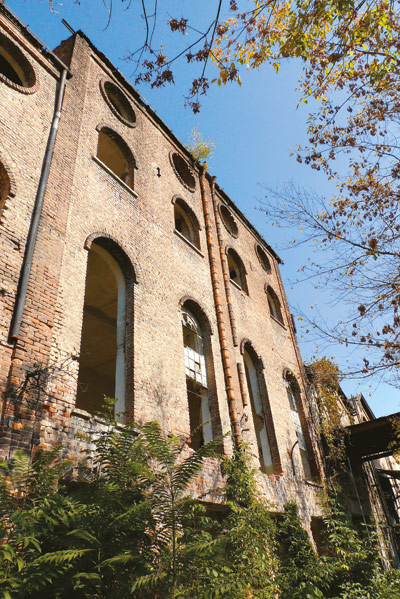 The end of sugar production did not, however, lead to the demise of the area, as the factory became the centre of a new and vibrant neighbourhood. When, in 1941, the government began the construction of 350 flats for workers, the ceremonial turning of the first sod was attended by the mayor and the minister of commerce, while Sofia's Bishop Stefan personally blessed the project with holy water.

Under Communism, the neighbourhood preserved its proletarian character. New prefabricated blocks of flats sprang up alongside the working class dwellings, whose romantic charm still peeps out from under their neglected roofs and peeling walls. The former sugar factory was now used as a granary.

Despite the fact that in 1998 the main production hall was listed as culture monument of national significance, the granary continued to use it. A task force began the blueprints for its transformation into a culture centre with art galleries, museums and restaurants. It was to be a welcoming and beautiful place, a kind of antidote to the Communist NDK.

The projects remained on paper, however, and due to the lack of maintenance and security, the building began to crumble. The abandoned rooms suffered increasingly from the incursions of the local unemployed in search of "precious" scrap iron – even if that meant breaking off metal columns or smashing walls to get at the metal rods inside.

They were there last summer too, in broad daylight: three young Gypsies, roaming the debris and scanning the ground. "We are guarding the factory," they said and laughed to make sure I got the joke. We had all entered the factory through the main gate, without giving much explanation to the old man ostensibly on guard. "You can't stop them," he said.

A few months later, in November, part of the old building collapsed on a couple of Gypsies digging for scrap iron and killed them.

The main obstacle to renovating the Sugar Factory is its owner. Neither Sofia Mel, in whose hands it was for many years, nor its current proprietor, TAB Real Estate, cared about repairing a culture monument of national significance. Anyone who has lived long enough in Bulgaria can tell you why.

Theoretically, destroying Bulgaria's cultural heritage is outlawed. But you can't forbid the owner of a cultural monument which has deteriorated through systematic neglect to clear away the ruins and build in their place something more useful, such as a shopping mall. The state can't repair the building because it has no money. For the time being, the only thing it has done is to fine TAB Real Estate.

If you decide to have a look around the old industrial building, be extremely careful. Walking there can be as dangerous as the ethnic tensions in the Zaharna Fabrika neighbourhood.