Fishermen are reluctant to engage in conversation with strangers, as this usually scares off the fish they hope to catch. And "Where is the church?" is not a question one would usually ask near a reservoir that is several kilometres from the nearest village. However, when you're on the southwestern bank of the Koprinka Reservoir, in the Sredna Gora, the question is pertinent – despite the reluctance of the local anglers.

The church of St Atanas rises from the marshy bank of the reservoir, hidden behind a group of trees. When the water is high, it floods the roots of the surrounding trees and the foundations of the building and the bell tower, lending a surreal guise to the church. Built in 1835 and painstakingly restored in the early 20th Century after brigands set it on fire, the church is abandoned now. The roof has collapsed and there was no bell in the bell tower; what used to be a garden had become a wilderness.

The church was forsaken in 1960, the same year as the village. The place was called Viden then and its population was resettled, since their birthplace lay in the path of one of the Communist regime's megalomaniacal construction sites: the Georgi Dimitrov Reservoir (its current name is Koprinka). This is the reservoir at the bottom of which was the Thracian town of Seutopolis.

Viden and St Atanas were not isolated cases. Everywhere that Socialist Bulgaria's largescale construction, in the form of reservoirs, was "creating goods for the working people", settlements and historical monuments were martyred in the name of progress.

An ancient city, Seuthopolis, lies under the waters of the Koprinka Dam

Some of them are still poking up above the surface of the water.

Some 20 kilometres from the Koprinka Reservoir, on the bank of the Zhrebchevo Reservoir, is the St Ivan Rilski Church. Once there used to be a village there, Zapalnya, but the only reminders for it are the church and a segment of the cemetery. You can find out what happened from the memorial plaque, which states: "The village of Zapalnya, 15th Century. [Population] [d]isplaced in 1962."

It is not hard to picture what the submerged villages looked like. This is how the writer Yordan Radichkov (1929–2004), a magic realist and twice a nominee for the Nobel Prize in Literature, described his native village of Kalimanitsa in his memoir Recollections of Horses. "The village had 473 inhabitants, us two included; additionally there was the cattle; the two watermills; the village fool; two stationary stills and one movable, drawn by a pair of horses and used chiefly for the illegal distillation of rakiya and for rapid movement, well, right under the nose of the excise duty collectors; a fortune-telling woman; a teacher; a deputy of the mayor; not to forget also ghosts, vampires and countless water goblins." The village used to be near Mihaylovgrad, today's Montana, and was deleted from the maps following the construction of the Ogosta Reservoir in the 1960s and 1970s.

Kalimanitsa was not the only victim of the reservoir. The neighbouring village of Zhivovtsi also disappeared.

The construction of the Ogosta Reservoir went on until the 1980s. Its waters were meant to irrigate the fields and orchards in the Mihaylovgrad area.

The village of Kalimanitsa was abandoned in the 1980s, but because of a miscalculation the waters of the Ogosta Reservoir never submerged it

Things turned out differently. The reservoir started to fill in 1986. By 1989 half of the irrigation equipment was yet to be built, but water analysis revealed that there was a deadly level of arsenic in the water, which came from the nearby mines at Chiprovtsi. Today the reservoir is used to produce electricity. Since the closure of the Chiprovtsi mines the arsenic level has declined below the permitted threshold and so now there are quite a few anglers on the bank, hoping to catch some of its legendary catfish.

The Ogosta Reservoir catfish have attained mythical status. Their length of more than three metres is attributed to a (supposed) mutation that resulted from the effect of the arsenic. According to rumours – in such stories, and also in all of Radichkov's prose, one can never know when something took place or if it took place at all – Japanese scientists were researching the fish in the reservoir. They discovered that the catfish had managed to process the arsenic in some way. The scientists made an agreement with the local authorities and more fish were introduced into the reservoir. These fish were supposed to purify the water of the arsenic entirely, and then be taken to labs in Japan for investigation. But the Japanese never took them. The mutants remained in the Ogosta Reservoir and grew fat amid the thick mud and the abandoned houses of Kalimanitsa and Zhivovtsi. 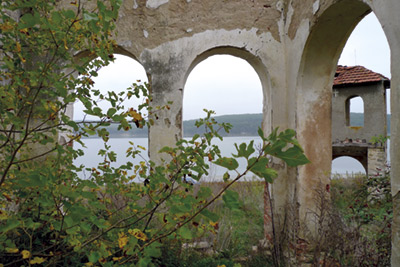 Urban legends abound also about the behaviour of the catfish. One tells of two children whose inflatable boat was swept far out into the reservoir during a storm. When divers later recovered their bodies, whole parts are said to have been missing. Similarly scary is the story about two divers (whether they came from Sofia, Poland or Russia depends on the story teller) who went diving in Ogosta. When they surfaced the hair of one of them had gone white. The other refused to speak about what he had seen in the water, but vowed that he would never enter the lake again.

But all this is by the way. The truth is that what happened to Kalimanitsa and Zhivovtsi was a much more dreadful affair than fables about mutant catfish.

Owing to a calculation error Kalimanitsa was never submerged. Its un-whitewashed church still sticks up out of the undergrowth, looking like the set of a horror film. A branched, centuries-old oak marks the spot of the one-time megdan, or square, and if you happen upon a villager who is slightly less reticent than most (as a whole, the locals are not particularly talkative), he might point to a nearby hill and say, "Over there is the old cemetery."

Today the site is a vineyard.

After the people of Kalimanitsa left, the village they had been born in was converted into an orchard. For some years now it has been under the care of an Italian entrepreneur who produces jams from organic ingredients.

The fate of Zhivovtsi was even more sombre. Kalimanitsa was founded in the 1880s, but Zhivovtsi had existed since the 15th Century. When the resettlement began, most of the village's elderly population refused to leave their homes. They stayed, but the community diminished by the year, because sooner or later people, just like settlements, die.

The waters of the reservoir eventually closed over Zhivovtsi, and now only a part of the cemetery and the stone church dating from 1858 can be seen on the surface. Its walls and those of the bell tower are covered with the naïve portraits of moustached men, reliefs of bow-wielding semi-naked hunters and fantastic creatures with humps resembling a camel's. You can find similar art also in the church of the nearby Lopushanski Monastery, as both buildings were erected by the builder known as Master Lilo. 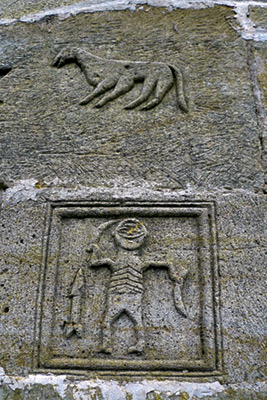 Perhaps these bizarre monsters were the inspiration for the verblyudi, fantastical creatures that populate Radichkov's short stories. They have humps like a camel, feed on rocks and wreak havoc wherever they go.

The only survivors of the churches of Kalimanitsa and Zhivovtsi were their bells. These are now kept at the Lopushanki Monastery, hanging on a tree in the yard.

Yordan Radichkov, in his memoir Recollections of Horses (1980), told how Zhivovtsi and Kalimanitsa were erased from the map of Bulgaria.

Decree for the closure of the hamlet: Dear reader, two years ago I received a letter from my Uncle Gavril; he was writing from Berkovitsa. I won't be quoting the whole letter but will only refer to his account of the shutdown of the village and the resettlement of its people into the world. Among other things he wrote: "The government was in two minds about whether or not to shut us down because of the construction of the reservoir, but finally it chose to shut us down, and it issued a decree to that effect and struck us off the list of inhabited places; tractors were sent to plough the earth flat; ryegrass was sown; and we, one by one, dispersed – now some of us are in Berkovitsa, some in Mihaylovgrad, some in Vratsa or in Plovdiv; some of us are even farther afield, on the Danube, and by the sea – we have gone every which way. Here we are at least 30 households, many have died but many have survived – the darn seed dies hard, you know. And we also got ourselves new sets of teeth, after all a man cannot be without teeth, as when you have no teeth you are ashamed to smile at people, you just try to hide your smile in the palm of your hand so that they can't see that you're toothless, and now nobody hides his smile in his palm and we are all babbling and laughing and, well, if you happen to see us laughing, everyone with his new teeth, you'll see us all grinning as if we were all dead. Amen!"