Swastikas appear on the Jewish cemetery in Shumen © Anthony Georgieff

An excerpt from A Guide to Jewish Bulgaria, published by Vagabond Media

Unfortunately, Bulgaria has never eschewed the sort of antisemitism prevalent in the rest of Europe in general and Eastern Europe in particular. That said, over the centuries antisemitic sentiments have rarely turned violent. Bulgaria has never witnessed Russian or German-style anti-Jewish pogroms, and even in the darkest years of the Defence of the Nation Act, the state’s enforcement of anti-Jewish regulations was at worst tepid.

While the earliest acts of antisemitism predate the official Christianisation effected by King Boris I in 865, the first real anti-Jewish polemic appeared in the writings of early Mediaeval Bulgarian writers. Yoan Ekzarh, Presbyter Kozma and others now taught in Bulgarian schools often indulged in acrid antisemitic speech.

An instance of violent antisemitism occurred in the mid-14th Century when King Ivan Aleksandar divorced his Bulgarian wife and married a Jewess, Sarah. Sarah converted to Christianity, but the king still ordered mass lashings and banishment of a sect thought to be associated with Judaism. One possible explanation for this was the plague which was ravaging Europe at the time: popular belief had it that it had been started by Jews poisoning Christian wells. Another is that the Bulgarian aristocracy wanted an easy way out of its burgeoning debts, owed mostly to Jewish merchants and tradesmen.

Bulgaria was conquered by the Ottomans in 1393-1396. An urban myth was put into circulation that the gates of Tarnovo, the Mediaeval Bulgarian capital, had been surreptitiously opened for the invaders by a Jew, an act of high treason that would condemn Bulgaria to 500 years of Ottoman "yoke." The myth lives on to this day. The great man of letters of the Bulgarian National Revival, Ivan Vazov (1850-1921), produced an unusually acrimonious rhyme about that "dirty Jew"; and as late as 1930 Angel Karaliychev, a popular writer of children’s fiction, published a story about this "Jewish treachery."

In the late 15th Century the number of Jews in the Bulgarian lands increased significantly when the High Porte in Constantinople welcomed thousands of Sephardic Jews fleeing persecution in Spain and Portugal. The Sephardis were exempted from some Ottoman taxes and in some places even allowed to mint their own coins. Antipathy between the Jews and the indigenous Christians grew as these privileges were often seen as evidence of a Jewish confederacy with the occupying force. The folklore of those years abounded in images of Jewish usurers conspiring with the Ottomans against the Bulgarians. One example lasting to this day is the Orthodox rite of baptism: the godfather of a child says to the mother: "I took from you a Jew, I give you back a Christian."

As Bulgarian nationalist fervour grew in the 19th Century, so did antisemitism. While Vasil Levski, the great Bulgarian National Liberation revolutionary, called for the foundation of a republic where all nationalities would have equal rights, his fellow revolutionaries Hristo Botev and Lyuben Karavelov considered the "great Jewish kings of capital" as the source of all the evil in the world.

During and after the 1877-1878 war between the Russian and Ottoman empires, which resulted in the expulsion of the Turks from most of the Balkans, many Jews were subjected to physical violence. Jews were robbed of their possessions and maltreated, while synagogues were burnt – often with the assistance of the Russian forces, which included hundreds of Cossacks. As the new territories were divided into the independent Principality of Bulgaria and Eastern Rumelia many Jews fled southwards, fearing antisemitic reprisals from both Bulgars and Russians. There are reports that the Jews of Svishtov, Nikopol and Kazanlak had to flee in atrocious circumstances, even at times turning to the regular Russian army for protection from enraged Bulgarians.

The Berlin Congress of 1878, seen by the Bulgarians as one of the greatest catastrophes to befall their nation, was masterminded by the Great Powers who had their own reasons not to allow a large and Russia-friendly state in the Balkans. The Congress included stipulations to safeguard the rights of all nationalities in the new Balkan states (Bulgaria, Serbia and Romania), including the Jews; but it left Greater Bulgaria dismembered. British Prime Minister Benjamin Disraeli, a Christianised Jew, was singled out for special castigation: "Oh, pity you, England, for being ruled by a kike," Ivan Vazov exclaimed in a poem. 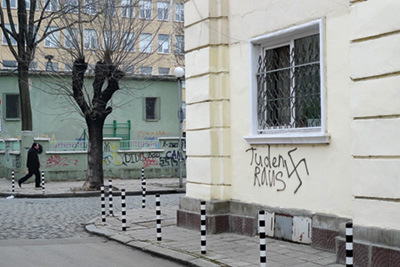 Late 19th and early 20th Century Bulgaria saw the proliferation of antisemitic literature, including many newspapers bearing names such as Bulgaria Without Jews and Golgotha. A number of Jews were accused of and tried for alleged abductions of Christian children, but the courts dismissed the cases as unfounded. Most political parties were to various degrees steeped in antisemitism. Bulgarian peasants did all in their power to prevent Jews from acquiring farming land, and many Bulgarians held a resentment against the Jews.

Despite all the declarations and promises, the principle of equal rights had a limited impact on the Jews. Various Bulgarian governments discriminated against them by introducing indirect anti-Jewish measures and regulations.

The most serious curtailment of Jewish rights started in the 1930s, when the access of Jews to public and educational services was gradually blocked. Bulgarians again vilified minorities, especially the Jews, for all the hardships the Bulgarians themselves had to endure. Bulgaria grew closer to Nazi Germany and saw the emergence of organisations such as Ratnik, or Warrior, which had been modelled on the German Hitlerjugend.

In 1939, in a copycat Kristallnacht, extremists in Sofia smashed the windows of Jewish shops and destroyed Jewish property.

Under the 1940 Defence of the Nation Act, the Bulgarian Jews were stripped of political, economic and other civil rights. Jewish men were forced into labour camps, and all Jews were ordered to wear yellow Star of David badges.

The Bulgarian Army, which administered Vardar Macedonia and Aegean Thrace, organised with unprecedented cruelty the deportation of over 11,000 Jews to Nazi-occupied Poland. The majority of those perished in the death camps at Treblinka and Auschwitz.

The Bulgarian government had decided to deport all of the Jews in Bulgaria-proper as well. Famously, the plan failed to materialise in what would later be dubbed the "Salvation of the Bulgarian Jews." This is well-known. What is not so well known, however, is that the Final Solution itself might have been inspired by a Bulgarian. Criticising demands by Spain, Hungary and Romania for a different treatment of their Jews, Ivan Popov, the Bulgarian foreign minister, insisted to his German counterpart Joachim von Ribbentrop that all Jews in all European states be treated equally, hinting at a "common solution" to the "Jewish problem." The Wannsee Conference ensued in 1942. 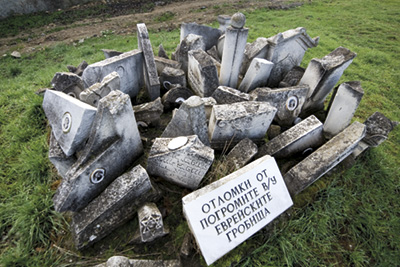 The Kyustendil Jewish cemetery has been vandalised on seven occasions

While all the details of who did what and what really happened remain mired in controversy, the fact is that the majority of Bulgarians were passive observers of the antisemitic hysteria and planned deportations. While it is true that the desire to render Bulgaria Judenfrei was nowhere near as strong as in some other European nations, many professionals, for example teachers, were reluctant to risk their careers by teaching in Jewish schools.

What the Nazis failed to do regarding the Bulgarian Jews the Communists achieved. The overwhelming majority of Bulgarian Jews were allowed to emigrate to Israel in 1949, largely owing to political reasons and thanks to per capita cash payments by the American Joint Distribution Committee. All pre-war Jewish organisations were disbanded, and the new Cultural Organisation of Bulgarian Jews was purged of religious functions. Jewish schools were gradually closed, synagogues were nationalised and turned into sports halls or warehouses. Jews were given quotas for higher education and the armed services. The Jewish News newspaper continued to circulate, but it was largely reduced to a mouthpiece of the regime. Bulgaria had become the closest satellite of the Soviet Union.

Jewish spiritual life had practically come to a standstill. Just a handful of elderly people attended the Sofia Synagogue, hardly making up a quorum for the Sabbath. The only other functioning synagogue in the country was the Zion Synagogue in Plovdiv, but services there were held only on the Day of Atonement.

Following the Six-Day War in1967, Sofia broke off diplomatic relations with Israel. The official propaganda of the 1960s, 1970s and 1980s spoke of two world evils, in this order: "Anglo-American Imperialism" and "International Zionist Reaction." While no Bulgarian save for those very well educated in history and political affairs knew anything about Zionism, the word itself became synonymous with aggression and anti-Socialist conspiracy.

The collapse of Communism in Eastern Europe in 1989 paved the way for a Jewish revival in Bulgaria. Most Jewish property was returned to its former owners, and Shalom, the organisation of Bulgarian Jews, began working to spread information and understanding of Judaism among the wider populace. 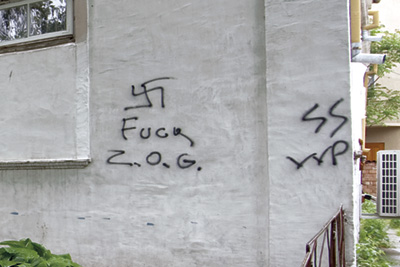 But the counter-reaction followed swiftly. The 1990s and 2000s witnessed attacks on Jewish properties, including the vandalisation of cemeteries. The Jewish cemetery in Kyustendil, for example, was vandalised on seven different occasions, and the home of Shalom in Burgas was unsuccessfully set on fire. The Sofia Central Synagogue was burgled. In the 2000s, extremist political leaders have taken up antisemitism as their cause célèbre. Bulgarian publishers freely publish antisemitic literature by Hitler, Goebbels, Jürgen Graf and Henry Ford, and these books can be found in most Bulgarian bookshops and street stalls. The authorities have done little if anything to curtail their distribution, nor have they properly investigated the spraying of Jewish graves with swastikas in Shumen and elsewhere.

In the area of politics, "incitement to racial hatred" is banned. In reality, however, various groups openly indulge in antisemitic rhetoric. Ataka, the nationalist party of Volen Siderov, takes its cue from parties such as France’s Front national, Austria’s Freedom Party and the British National Front. It has a vocal parliamentary representation. One of Siderov’s favourite topics is the same old "world conspiracy."

The use of the Nazi swastika is widespread – from street gangs spraying it onto Gypsy homes and Turkish mosques, to football fans asserting their membership of a team, to anti-Communists pitching it against still omnipresent Red Army symbolism. The authorities usually consider it vandalism with no particular political meaning. Swastikas have been sprayed onto Jewish graves and can be seen in Central Sofia accompanied by the words "Juden Raus."

The main problem remains the ingrained antisemitic prejudice of ordinary Bulgarians. It is difficult to produce any precise data, but the language employed by Internet users to demonised Jews dwarfs any hate speech sometimes heard from extremists in Western Europe and the United States. This suggests that the type of Mediaeval antisemitism that held Jews responsible for everything from the crucifixion of Jesus Christ to the current world economic downturn is alive and well, and the belief in a "Judeo-Masonic plot" is something Bulgarians will have to live with for many years to come.