More than 20 years after the fall of Communism, Sofia still bears the signs of the regime in its architecture and monuments. The very centre of the city is constructed in the ostentatious style and design popular in the time of Joseph Stalin. The larger parks have monuments of Soviet soldiers, commemorating their feats in the Second World War and the supposed "eternal friendship" between the Bulgarian people and the Russians. Although the old buildings and monuments are despised by many, they bear witness to the country's past, which cannot easily be erased.

To fully understand and appreciate why Sofia looks the way it does now, one needs a bit of a background. In late 1944 the Communist Party had just gained power in Bulgaria. The centre of the capital had been devastated by Allied bombs and the new authority had the perfect opportunity to redesign it in the Communist style prevalent in the USSR. Plans by different architects were drawn up and soon buildings of a massive scale rose in the centre of Sofia. The headquarters of the Communist Party, the ministries of Electrification and Heavy Industry, a mausoleum for Communist leader Georgi Dimitrov and a hotel formed the sides of a vast space still called The Largo. Attached to the Ministry of Heavy Industry was the largest trade centre at that time in the Balkans. A national stadium, a sports palace and a number of enormous Communist memorials completed the scene.

Impressive in their massiveness, all of these architectural creations were designed in line with Stalinist brutalism. Their scale and sheer size was both unnecessary and impractical, the amount of interior space was excessive. But these features were necessary to impress upon the people the power of the Communist party and its almighty authority, and to make them feel small and insignificant, mere cogs in the system. All these buildings, except the mausoleum, have survived and, though now used for other purposes, are still functioning.

The missing mausoleum of Communist leader Georgi Dimitrov was situated in front of the National Art Gallery, the former royal palace. Built in just six days, after Dimitrov's death in 1949, this enormous memorial housed Georgi Dimitrov's embalmed body and was an important emblem during Communism. Foreign delegations were invited to lay flowers there on their visits, and official events of the Communist Party took place at the site. In 1990, however, the remains of Georgi Dimitrov were removed, cremated and buried in Sofia's Orlandovtsi cemetery. Nine years later the building was demolished under the supervision of the then deputy prime minister Evgeniy Bakardzhiev. 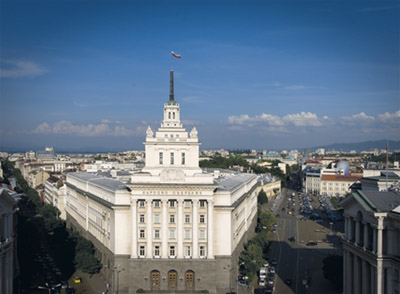 Used to be: Headquarters of the Central Committee of the Communist Party

The other buildings are still in situ, rising above the yellow cobbles of Tsar Osvoboditel and Dondukov boulevards. Bulgaria's national flag flutters from the top of the National Assembly, which was the headquarters of the Central Committee of the Communist Party until 1989. The building was once decorated with a huge ruby-red five pointed star, which was removed with a chopper in 1990.

To its left is the Council of Ministers which, prior to 1989, was the Ministry of Electrification. Attached to it is the Central Universal Store, or TsUM, which contains various shops, cafés and offices, and was said to be the largest shopping centre in the Balkans during the Communist era. The newest and best outfits were sold there, and Bulgarian women remember queuing for hours just to buy a pair of shoes available nowhere else. The store was also famous for its escalators, the first to be installed in Bulgaria – a major attraction for kids and adults alike. A curious fact about its construction is that the massive columns in front of the store are, in fact, hollow. TsUM was renovated in 1999-2001 and is now one of the modern if somewhat empty shopping centres in the capital.

Opposite rises the five-star Sheraton Hotel, once called the Balkan. It used to be where official guests and political leaders from abroad were accommodated, taking an advantage of its luxuries during their stay in the capital. At present it is a part of the Sheraton chain and one of the biggest and most expensive hotels in Sofia.

The seven storey building attached to the hotel was once occupied by the Ministry of Electrification, and now contains the president's office and the presidential administration.

When Communist leaders were planning the new look of the capital, they did not forget the importance of sports. A 50,000 seat stadium was built to accommodate sports events and national football championships. The Vasil Levski National Stadium was also equipped with chess, boxing, wrestling and weight lifting halls and facilities. Its architects and designers, however, can scarcely have thought that one day the stadium would also become the venue for concerts by Western bands and musicians who were officially banned during Communism.

Used to be: Ministry of Electrification

Together with the stadium, a home for the Bulgarian Sports and Physical Culture Alliance and its central committee was built. This massive building, situated on Vasil Levski boulevard, is now known as the Sports Palace. It has one of the few swimming pools in the centre of the city, as well as a fitness centre and different sports facilities. The Ministry of Sports is also located in the building. Another building which kept its function and even its name after 1989 is the Dimitar Blagoev Printing and Publishing Combinate. If you drive along Tsarigradsko Shose Boulevard towards Mladost, you will notice an impressive yellow façade on the left, half a kilometre past Orlov Bridge. This was once the place where Communist propaganda started its journey to the Bulgarian people. The official organ of the party's Central Committee Rabotnichesko Delo, or Workers' Deed, and other newspaper editorial offices were located there. Newspapers were written and printed in the combinate, named after the founder of Bulgaria's Socialist movement, Dimitar Blagoev. When the building was under construction the Communist Party pressed the people for financial support and many donated half their salaries towards the project. Nowadays, however, the building is no longer the property of the state. It was sold and now houses the editorial offices of several Bulgarian newspapers, as well as a modern printing press.

To complete your tour of Stalinist Sofia, you should take in the monuments as well. The Soviet army memorial complex is definitely not just one of a kind. If you have ever walked in the Borisova Gardens you have probably noticed the tall obelisk rising out of the middle of the park. This is known as Bratskata Mogila, or the Mound of Brotherhood, and it marks the tomb of 17 activists of the Bulgarian Communist Party and the Young Workers Union, or REMS, who died fighting against the royalist government. The 41- metre high obelisk was built also to symbolise the rise of the Bulgarian Communist Party.

The expensive area of Lozenets also has a monument that it was once proud of. Not surprisingly, the memorial features heavy granite figures of Soviet soldiers who lost their lives in the Second World War, at the Yugoslav front. Their bones are buried in an ossuary, which forms part of the memorial.

Used to be: Ministry of Heavy Industry 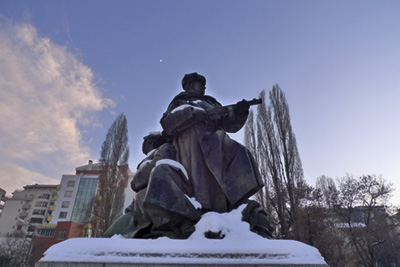 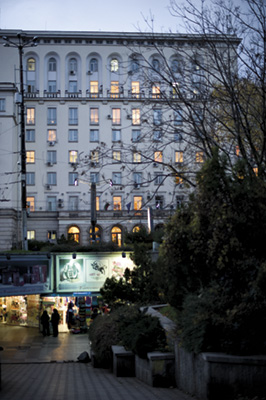 Used to be: Balkan Hotel, owned by the state 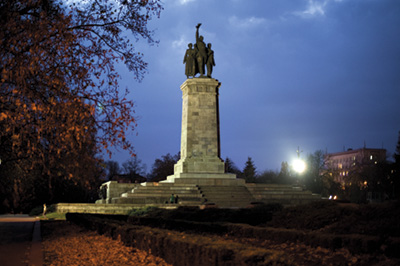 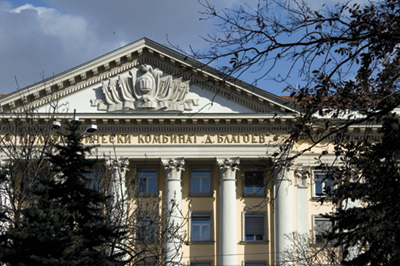 Used to be: A printing and publishing combinate

Used to be: Central Universal Store, owned and managed by the state