In ancient times, making for a light on the west coast of the Black Sea during a storm was not always a good idea. The tribes living on the shore often made a huge pyre to con distressed seamen into what they would think was a friendly harbour. Turning their ship towards it, they would discover that they had been lured onto a dangerous reef, or would run aground. The plan of the so-called land pirates was simple ‒ mislead the sailors, "help" the ship to sink, and then collect the goods that the waves would wash ashore.

These parts of the Black Sea coast are now in Bulgaria but things have changed considerably since Antiquity. To keep shipping safe, there are 25 lighthouses and navigational aids on the Bulgarian shore, a remarkable number for a nation that has only a short stretch of the Black Sea and that has never been particularly known for its maritime culture.

The earliest lighthouses appeared in Ottoman times, a result of the modernisation policies of Sultan Abdülmecid I (1839-1861). He assigned building and maintenance of lighthouses to a French concessionnaire, the Compagnie des Phares de l'Empire Ottomane. The company secured 25-year contracts to collect taxes from the merchant navy, and in 1856-1866 built lighthouses on the capes of Shabla, Kaliakra, Galata and Varna. In 1879, when the concession should have ended, the government of what was already an autonomous Bulgarian state discovered that the High Porte had extended the contract with the French company without telling it. In 1880-1888 the company built three more lighthouses, on Cape Emine and on the islands of St Ivan and St Anastasiya.

The Compagnie des Phares de l'Empire Ottomane left Bulgaria only after the state declared full independence from the Ottoman Empire in 1908. In 1909 the state took over the construction and maintenance of all of the lighthouses.

In 1949 the main lighthouses on the Bulgarian Black Sea coast were put under the jurisdiction of the Defence Ministry, as they were considered "strategic." Since 1972 they have been under the control of the Bulgarian Navy bases in Varna and Burgas. 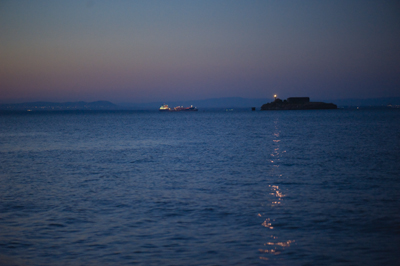 History: A lantern on a steel post already hung here in 1614 and maps from 1828 indicate that a "big fire" helped ships to navigate the bay. The first real lighthouse here, however, was built in 1883-1888 by the Compagnie des Phares de l'Empire Ottomane. The building was not that remarkable. According to the Czech historian Kostantin Jireček who saw it in 1884, it was a "wooden building on stone foundations with a windmill."

The current lighthouse is 12.3 metres high and was built by another French company, Barbier Benard & Turenne. Its appearance is similar to those of the lighthouses on Cape Galata and St Ivan Island. The lighthouse was switched onto the mainland electric grid as late as 1963 when the island was proudly called Bolshevik. 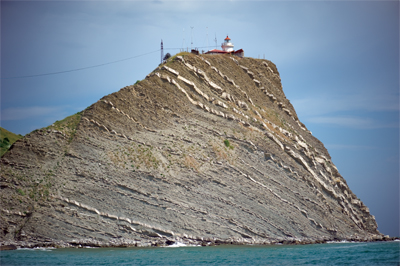 History: Considered the most picturesque on the Bulgarian Black Sea coast, this lighthouse is 9.4 metres high and stands on the vertiginous point where the Stara Planina meets the Black Sea. The lighthouse was built in 1880 by Compagnie des Phares de l'Empire Ottomane. Nowadays it is off limits as it is in a military zone, but nothing will happen if you sneak through the rusty gates for a peer. A much better idea is to rent a boat from the nearby resort St Vlas, and observe the dramatic cape from sea.

Where: Port of Varna 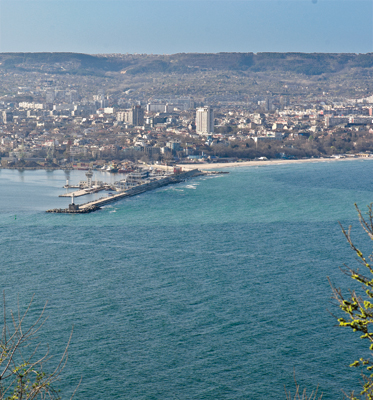 History: The first lighthouse on Cape Varna was built in 1863 but was demolished at the beginning of the 20th Century, when the construction of the new port rendered it useless. The three new lighthouses that replaced it were built by the French company Sautri & Harle.

The most interesting of them is the main one, on the tip of the east pier. Its 8.6-metre high metal tower stands on a massive base of concrete and stones. During the first half of the century, the base was adorned with a portrait of King Ferdinand I, in whose reign the port was built. This portrait disappeared after the Communist coup of 1944. Five years later the town changed its name from Varna to Stalin and, of course, a portrait of the Soviet dictator was attached to the lighthouse. Things changed in 1956 when, in line with Kremlin politics, the Bulgarian Communists decided to shake off the cult of personality. The city of Stalin became again Varna, and on the lighthouse a portrait of Georgi Dimitrov, in fact an ardent Stalinist, was installed.

After the fall of Communism in 1989 things changed yet again. Dimitrov was removed and since 1994 a mosaic of St Nicholas, the patron saint of sailors, has adorned the concrete base.

Where: North of Sozopol 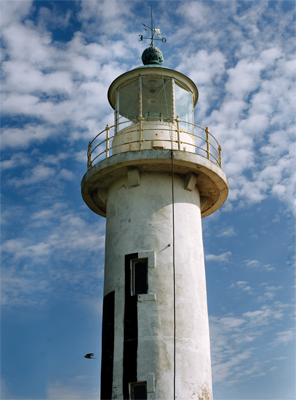 History: The first lighthouse on the largest island in the Bulgarian territorial waters appeared in the early 1880s. The 9-metre high building you see today is a later structure built as part of a greater programme for the development of sea transportation at the turn of the 20th Century. In 1931 the lighthouse was equipped with a fog horn. 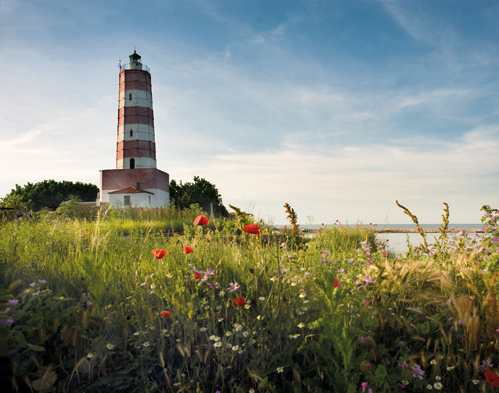 History: The oldest lighthouse in Bulgaria is positioned where an earlier facility stood in the middle of the 18th Century. Impressed by the technical superiority of the West during the Crimean War of 1853-1856, Sultan Abdülmecid I decided his empire had to catch up and, among others things, he initiated the building of modern lighthouses at the most dangerous points on the Black Sea coast.

The lighthouse at Shabla was the first one built by French concessionnaire Compagnie des Phares de l'Empire Ottomane in present-day Bulgaria. The building was damaged in the 7.2-Richter Scale earthquake that struck the northern Black Sea coast on 31 March 1901, and several months later it was reinforced with the metal frame that is still visible today. The lighthouse underwent a fullscale renovation in 1934-1935, when that part of the coast belonged to Romania.

Since then, the only changes to the lighthouse have been the updating of its optical system in 1957 and 1987.

Despite the alterations, the Ottoman past of the lighthouse is still here today. The tower is topped with a crescent and a star, and one of its walls is adorned with the red tugra, or personal seal, of Abdülmecid I.


Where: On a reef on the northern side of Ahtopol Bay 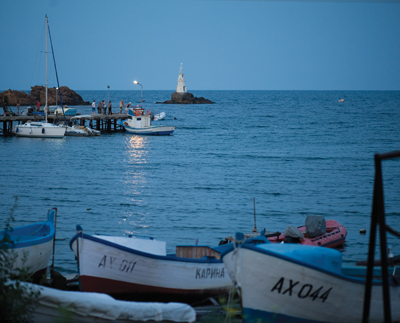 History: Perched atop a reef, the lighthouse of Ahtopol is a serene summertime sight. In winter, however, the structure has to endure rough waves and strong winds.

This explains the long list of repairs and dramas that filled the first decades of its existence. In 1936 it was made almost four metres taller, at 15 metres, because high winter waters were going over its top and making it freeze. In 1945 the concrete base was badly damaged by the water and had to be reinforced. Two years later, a boat with four people carrying fuel for the lighthouse sank during a winter storm. Luckily, the men survived.

The problems continue. Ensuring the lighthouse gets electricity from the mainland especially in stormy weather has proved an unattainable feat of engineering, and today the lighthouse is powered by a battery.

Where: Port of Burgas 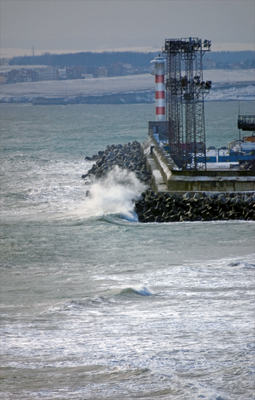 History: The port of Burgas was inaugurated by Prince Ferdinand I (1887-1918) in 1903 with a lavish ceremony that failed to conceal the fact that, if everything had gone smoothly, the inauguration would had happened years before. The Bulgarian parliament had decided to build modern ports to expand the trade of the cities of Burgas and Varna as early as 1888, but difficulties in finding a reliable developer postponed the start of the works several times. The building of the Burgas port commenced in 1899, and the 8.6-metre high metal lighthouse you see today on the eastern breakwater appeared the same year. It was installed by the French Sautri & Harle company and today is considered the oldest port lighthouse in Bulgaria.