The grave of Orpheus? © Anthony Georgieff

Orpheus's harp was so captivating and his songs were so beautiful that there wasn't a single creature on earth that was not enchanted by his gift. Wild beasts, rocks and stones, and even the gods stood becharmed.

The songs of Orpheus, however striking they might have been, faded away long ago, and now no one really knows what they sounded like. Yet the life of the singer still has the power to capture people's hearts and imagination. The stories about how Orpheus was born, how he lived and how he died differ depending on who does the descriptions. Ancient Greece, where the first versions of these semi-legends were recorded before Romans such as Ovid popularised them, never had a centralised religion with a straightforward mythology. Every town and district had their own myths about the feats of gods and heroes, and very often these contradicted each other. The one about Orpheus was no exception.

Regardless of which version you read, most of them recount two events that have stirred human imagination for centuries. They have inspired works such as Gluck's opera Orpheus and Eurydice, a large number of paintings by artists of the 19th Century Aesthetic Movement and a plotline in the magnificent Neil Gaiman comic book series The Sandman.

The first tells of Orpheus's descent into Hell. The musician was so distraught by the sudden death of his wife, Eurydice, that he climbed down into the Kingdom of the Dead and, with a song, softened the hearts of Hades and Persephone. There was one condition: Eurydice was to walk behind Orpheus, who was not to turn round until both of them had seen the light of the sun. Of course, Orpheus did turn round.

The second story follows on from the first. The dejected Orpheus did something to anger a group of women, who murdered him with their bare hands or by stoning – the accounts vary. A further legend tells that Orpheus's head and his lyre floated down the River Hebros and across the sea to the island of Lesbos. There the locals erected them on a stone column, from where they began to prophesy.

In 2002 Greek archaeologists announced that they had found the site on Lesbos where it was likely the Orpheus oracle used to be. Some years later, however, their Bulgarian peers came up with an alternative version. They said they thought the place where Orpheus's head used to foretell the future was in the heart of the Rhodope, near a village in the Kardzhali region.

This village, Tatul, could be any one of the many Rhodope hamlets that you will pass through while you drive through the hills. Most are are nothing to write home about. Tatul, however, is not your ordinary Rhodope village. A high rocky hill rises near it, crowned by one of the most peculiar megalithic structures the Thracians left in the modern-day Bulgarian territories.

On the hill top a 4.5 metre-high monolithic stone mass rises in the shape of a truncated pyramid. A semicircular niche that overhangs a sarcophagus-like stone tomb is carved into one of its sides. A second rectangular basin is carved out at the top of the pyramid. Nearly 2 metres long it, too, is very much like a sarcophagus.

The second sarcophagus can be seen only if you climb a couple of narrow, steep and vertigoinducing steps.

Bulgarian historians have known about this unusual phenomenon for quite a while. It has been interpreted as a complex of rockcarved places of worship, a fashion that was widespread among Thracian aristocrats in the eastern Rhodope in the 2nd and 1st Millennia BC. There is a large picture of the Tatul tombs in the first volume of the academic and shiny History of Bulgaria from the 1980s. It was put forward in the early 1980s that the sarcophagus at the top of the pyramid might have been used as an observation tower for the sunrises during equinoxes and solstices.

The tombs are not the only traces of human activity on the hill. There used to be a prehistoric shrine at its foot which probably went on being used until the introduction of Christianity in the 6th Century. A probable explanation for the mixing of tombs and shrine is the belief the Ancient Thracians had that their rulers became demi-gods after they died.

After the 6th Century, the memory of the shrine gradually faded. Interest in the hill reappeared in the Middle Ages, when a fortress was built beside it.

But how was it that the names Tatul and Orpheus began to be used in the same sentence? This correlation is the result of the practical application of a bold theory, developed by the late historian Professor Aleksandar Fol. It posits that Orpheus was a real person who lived in the 2nd Millennium and was of Thracian origin. His achievement was that he managed to reform the religion of an entire people. 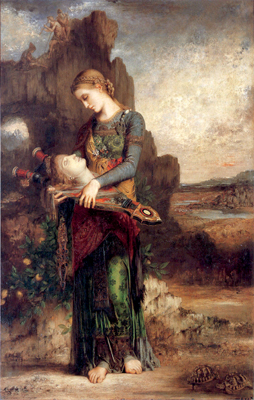 Thracian Girl Carrying the Head of Orpheus on His Lyre, 1865, by Gustave Moreau

Before Orpheus, the Thracians had believed in an elemental Dionysus, the god of unbridled ecstasy and darkness in both nature and the human soul. Orpheus introduced the Thracians to a new deity, a bright, spiritual god who promised everyone who followed him a life after death. This was Apollo. However, Orpheus's new ideas were not meant for the masses – only aristocrats and a chosen few were introduced to his teaching, and only they could hope to live forever after death.

Professor Fol's theory was applied to Tatul in the mid-2000s, as it was reputed to have been a shrine to Orpheus and his possible resting place. Circumstantial evidence abounds. The sepulchral complex has no known analogue in the Balkans, and it is obvious that it was set up for a very important person who, perhaps, not only reformed the religion, but was also a king.

The sarcophagus atop the pyramid is so high that it appears to be looking towards the sky and the sun. Orpheus was, after all, a disciple of Apollo, the sun god. One of the legends about the death of the musician claims that he was torn to pieces by the Maenads precisely because he had chosen to bow before Apollo instead of Dionysus.

In 2005 one further discovery gave additional weight to this hypothesis. Villagers from Tatul gave archaeologist Nikolay Ovcharov, the man who popularised Perperikon, a bronze statuette which they had found "in the area." This statuette, from the 1st or the 2nd Centuries AD, was of a nude Greco-Roman deity with a lyre, and possibly depicts Apollo. Ovcharov, however, interpreted it as a rare image of Orpheus.

All this circumstantial evidence – boosted by the curiosity of tourists and the sensationalism of the media – transformed Tatul within only a few years. Today the shrine is popularly known as the "Grave of Orpheus" and there is a brisk stream of tourists to the area: the once-quiet location has livened up.

You must pay an entrance fee if you want to see Tatul, and a new path with wastebins, benches and signposts leads to where a metal roof rises on the former wild peak, a necessary modern addition to protect the excavations from the weather, but not particularly inspiring for someone who has set out to see the place where Orpheus perhaps found final rest after a confused and tragic life.

Was Orpheus a real person? Most ancient authors believe so, Aristotle being an exception. However, the information on the musician's death is scarce and contradictory – a perfect opportunity for cold-case lovers.

Witnesses: None. All his biographers were born centuries after he died. The most prominent accounts are from a Late Antiquity summary of a lost Aeschylus play, the travel writer Pausanias, the Roman poet Ovid and Diogenes Laertius.

Cause of death: Torn to pieces by Maenads (Aeschylus) or by Ciconnian women (Ovid), struck by a thunderbolt from Zeus (Diogenes Laertius) or suicide (Pausanias). Motives: Not paying respect to Dionysus in the god's own sanctuary (Aeschylus), fancying sex with young boys after Eurydice's death (Ovid) or revealing the mysteries of the gods to mortals (Diogenes Laertius)

Suggested whereabouts of remains: Pieria, on mainland Greece (Aeschylus) or Dion, at the foot of Mount Olympus (Pausanias). Lyre and severed head carried by the Hebros River and sea waves to Lesbos where they foretold the future. Or Tatul, Bulgaria.