Building 'historical' fortresses, sometimes with EU money, becomes the fashion of the day

Extensive and menacing, perched high above a particularly steep meander of the River Yantra, Tsarevets Fortress is one of the most recognisable sights in Bulgaria, a must for every tourist to Veliko Tarnovo. That town used to be the capital of Bulgaria from the 12th to the14th centuries, and today has one of the few medieval fortresses in the country. Tsarevets's precipitous walls are the stage for lavish open-air opera performances as well as a 1980s Sound & Light show. It is the place where the last Mediaeval Bulgarian patriarch organised fierce but doomed defence against the siege of the Ottoman Turks, and one of its towers was used, allegedly, as the prison cell of Baldwin I, Count of Flanders and the first Latin emperor of Constantinople, whothe Bulgarian King Kaloyan had captured in battle. Why and how Baldwin died remains enshrouded in mystery. According to some, Baldwin was killed by an enraged Kaloyan after a revolt in the city of Philippopolis, which was supposedly organised by Baldwin's supporters. Another story blames his death on Baldwin's chivalry manners. Plainly put, short-tempered Kaloyan ordered Baldwin's arms and legs to be cut off and the remaining body to be thrown off into the river from that same tower because he thought the European was taking on the queen.

Today, the so-called Baldwin Tower is in every guidebook and is considered one of the major sights of Tsarevets. Most of the guidebooks, brochures and guides, however, keep silent on the fact that the gruesome Baldwin Tower was built in 1930-1932. Back then, the tower was in ruins so the Bulgarian architect Aleksandar Rashenov erected it from the ground, taking as his inspiration a well preserved 14th-century tower in the Cherven Fortress, near Ruse. The same holds true of the whole of Tsarevets. The medieval stronghold of Bulgarian kings was designed as a theme park as late as the 20th Century.

Bulgarian medieval writers eagerly compared Tarnovo's splendour to that of Constantinople. Most of Tarnovo, however, was destroyed in the Ottoman siege of 1393 and the ensuing pillage. Muslims settled on the hill of Tsarevets and their houses, a mosque and a cemetery sprang up on the ruins of former palaces and churches.

However, some of the medieval structures were still standing even after the Liberation of 1878. The third gate of the main entrance to Tsarevets, for example, was almost intact in 1889, but that wasn't enough for the young and ambitious Bulgarian state who needed every bit of its glorious medieval past to serve as a justification for present political decisions to inspire even greater glory in the future. On 22 September 1908, standing in Medieval St 40 Martyrs Church in the foot of Tsarevets, Prince Ferdinand declared Bulgaria independent from the Ottoman Empire, and himself king.

Tsarevets itself wasn't much to write home about at that stage, but it all started to change in 1930s, when Rashenov reconstructed the socalled Baldwin Tower and the first gate of the main fortress entrance.

Work on the hill started again in 1970s, under the Communist regime. The third gate of the main fortress entrance was built in 1971, but the grand-scale construction works started in earnest after 1978 when the government promoted what it called the Veliko Tarnovo 1,300 Programme. It was part of the megalomaniacal activities to celebrate Bulgaria's 1,300 anniversary set in motion by Lyudmila Zhivkova, daughter of dictator Todor Zhivkov and then culture minister. 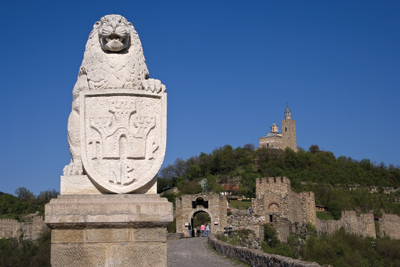 The ruins of Tsarevets were built in the 20th Century

Tsarevets's former glory was to be brought back to life, short and simple. That there was little or no credible information about what the hill actually looked like 10 centuries previously was not to thwart the sort of patriotism the Communist government wanted so desperately to stir up in the working classes. Architects and artists let their creativity run wild, culminating in the "restoration" of the main church on Tsarevets. Architects based the design of its exterior on the few medieval images of the original building, some archaeological research and a lot of imagination.

The church frescoes, however, are definitely over the top. Designed and painted by the artist Teofan Sokerov in a distinctive Socialist Realism style, the murals are a grim comic strip telling Bulgaria's long history, full of sufferings and victories of which the Communist coup in 1944 was the greatest. One of murals unabashedly depicts Lyudmila Zhivkova herself. She never saw this completed building as she died in 1981, before it was completed, but it is still there: as late as 2011 visitors can glimpse at Todor Zhivkov's daughter as long as they can make the steep climb to the top of Tsarevets.

By 1985 most of the "restoration" of Tsarevets was finished. The inner city walls and towers, the gates and the main church with its impressive campanile rose again, to be gazed on and mocked by ordinary Bulgarians, who billed the whole enterprise "the new ruins of Tsarevets."

Yet after several years the mockery waned and people grew accustomed to the pseudomedieval structures. The Tsarevets skyline was imprinted on the public consciousness through postcards, souvenirs and TV reports, while Bulgarian kids were taken on obligatory school trips.

From being the folly of a dying totalitarian state, the new ruins of Tsarevets become a source of patriotism. As democracy made its uneasy entry into Bulgaria in the 1990s, it seemed that building of ruins in general and Tsarevets in particular would remain a unique phenomenon.

But alas. Encouraged by historians-cumpoliticians of the Bozhidar Dimitrov type, the enthusiasm for constructing historical theme parks on authentic foundations came back with a vengeance. This time its main goal was not only to boost patriotism but also to attract unsuspecting foreign tourists.

Sozopol, on the Black Sea, was the first victim of the new tide. Founded in 610 BC by Greeks, Appolonia Pontica was a major and prosperous port for centuries. During its long history as an independent city and as part of the Roman and Byzantine empires, it was defended by the sea and its massive fortress walls.

Most of the walls and the buildings of the ancient and medieval city were destroyed in the Ottoman period, and in late 1990s to the mid 2000s, when the property boom let to uncontrolled building. Today, the charm of old Sozopol is to be found in the quaint, winding alleys with houses and churches dating from the 18th and 19th centuries.

In the mid-2000s, part of the erstwhile southern fortress wall of Sozopol rose again, with pinnacles, embrasures and all. It was reconstructed by the local municipality with the blessing of Bozhidar Dimitrov, himself Sozopol-born. The new fortress wall, the media informed us, was a replica of the long lost walls built on the orders of Emperor Anastasius I in 501 AD, and would attract hordes of eager tourists to the city. 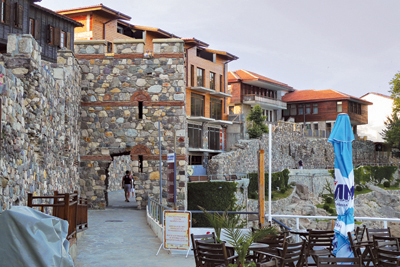 Whether the new medieval walls have served their purpose is debatable, but Sozopol Municipality seems more than happy with them. It secured some state funding and now plans to rebuild the entire wall that 700 years ago encircled the peninsula where old Sozopol is situated. "When finished, it will turn Sozopol into a true rival to Dubrovnik," a city resident, said eagerly quoted by the media.

In Sozopol, it seems there is more to come.

In 2010 archaeologists discovered fortress foundations near the so-called Old School, in one of the most picturesque parts of the city. Bozhidar Dimitrov was quick to announce that that fort will be rebuilt, too. "I hope that this will adorn Sozopol with another remarkable monument of medieval Bulgarian and Byzantine architecture," he said.

Meanwhile, the building of new ruins in Veliko Tarnovo has started again. The hot spot this time is Trapezitsa, another hill overlooking the Yantra. In the medieval period, it was the place where the Bulgarian aristocracy lived in palaces and prayed in small but richly ornamented family chapels. Trapezitsa is believed to have surrendered to the Ottomans, thus avoiding destruction, and many of its churches were in use well into the 16th Century. The hill was excavated in the 20th Century, but until a few years ago didn't appear to have much tourist potential, as it was covered with thick forest amid which a few roofs protecting excavated foundations could just be seen.

Now Trapezitsa is completely different. Some of the trees have been cut down and bold stone fortress walls catch the attention of tourists. The rebuilding is the result of recent research, when archaeologists discovered the foundations of a wall and a large aristocratic residence that, they believe, belonged to the House of Asen in the first decades after it rose to power.

The hill is destined to change beyond recognition. In July 2011 Trapezitsa got about five million leva "for research, conservation and restoration" from the EU Regional Development Operational Programme. Promptly, the first new ruins on it can already be seen.