THE DAY OF THE COCK

by Gergana Manolova; photography by BTA
Rate this item
(2 votes)

The cock was carefully chosen in the autumn and put on a special fattening diet, and now the proud bird struts around the yard like a king surveying his domain. Its days are numbered, however, because on the second day of February it is going to play the lead role in an ancient ritual.

2 February is called Petlyovden, or the Day of the Rooster, and is celebrated as the day of masculinity and manhood. In the villages of eastern Bulgaria people follow age-old traditions. A teenage boy, the petelar, has to slaughter the bird on the threshold of the house, so that the blood is spilt on the door. The foreheads of all the male children are marked with crosses in this blood for health, longevity and protection against evil. Then the head of the rooster is stuck on the door, looking east, and the legs are thrown onto the roof. The rest of the bird will be cooked with pickled cabbage or rice for the feast at lunchtime. 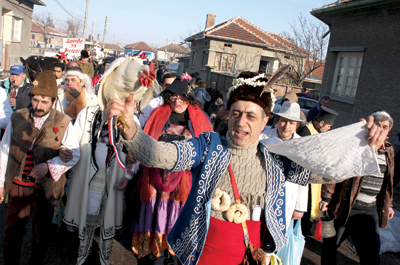 In the villages Petlyovden is a cause for public celebration with dancing and music. The rooster is a symbol of manhood and fertility

The roots of some Bulgarian traditions go deep – in this case, so deep that it is difficult to establish the origins of this celebration. Some claim that it was a custom of the ancient Slavs, ancestors of the Bulgarian people, or maybe a remnant of an older Thracian custom, connected with the god of the underworld. Although the holiday is probably pagan in origin, nowadays it is laden with biblical overtones, the celebration of the Presentation of Christ at the Temple being on the same day.

The rituals of Petlyovden differ from place to place, but the common element is the blood on the door. This has various explanations, most of which now have a Biblical source. According to some, the blood on the door is connected to Herod's Massacre of the Innocents, when the king of Judea ordered the slaying of all male children in Bethlehem under the age of two. Others claim it comes from the Ottoman times and their Blood Tax, or Devshirme. 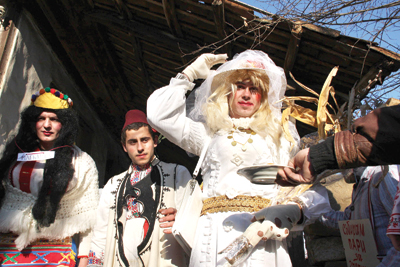 The Ottomans rounded up pre-adolescent boys from their territories to fill the ranks of the military. These boys underwent conversion to Islam and harsh physical training before joining the elite Janissary corps. This forced abduction of children was a source of much anguish and grief to the predominantly Christian population of the Balkans. The Devshirme has left deep traces in the folk tales, songs and customs of the region, and was used successfully as part of the 1980s anti-Turkish propaganda to justify the Revival Process.

Legend has it that the emissaries of the Ottoman Empire went round a village and, after collecting the boys, marked their doors with blood. The Bulgarians tried to deceive them in a way similar to the Old Testament, when the Jews in Egypt marked their doors with lamb's blood to ward off the plague sent from God, which was meant to kill the oldest male children in each house. The Bulgarians killed roosters and used their blood to create the impression that the emissaries had already been there – while their sons were safely hidden away.

Another version of the legend has a brave Bulgarian mother from Erkech (the old name of Kozichino, a village in the Burgas region) who hid her son and slaughtered a rooster to pretend she had killed her child. The Ottomans who came to take the boy were stunned by what she appeared to have done and did not take any more children from Erkech. 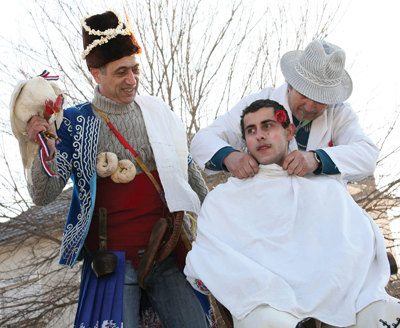 The celebration of Petlyovden is not only for the boys, but also for their mothers and for women who want to have a male child. The mothers pay their baba, or midwife, a special visit to show their respect. The would-be mothers of sons have to take their rooster to be slaughtered at a house with a lot of boys or, if their own house has only girls, they can kill a hen for the daughters' health and prosperity.

The older men also celebrate, sometimes with strange and colourful rituals. In the village of Kozarevets, near Veliko Tarnovo, 2 February is the day of the Ergenska svatba, or Bachelors' Wedding, dating from the 1930s. Young men are encouraged to enter into matrimony through the unusual "wedding" of two bachelors. One of them is prepared as the "bride" – with make-up, women's clothing and jewellery. The rituals of the traditional wedding are turned upside down; only men can take part in this celebration, which includes a ceremony performed by a mock priest. It ends in a feast, where everybody drinks to the couple and to the reduction in the number of bachelors. 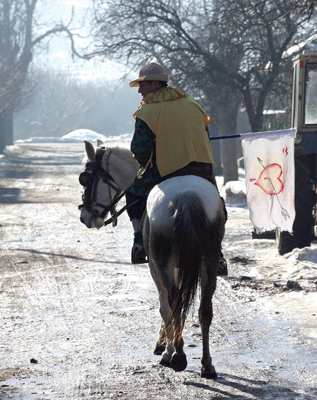 Maybe from this cross-dressing custom evolved the modern notion of 2 February, which in Bulgarian urban folklore is considered to be the day for gay men. It seems to be more widely known among young people than Petlyovden. Nowadays, instead of being chosen as petelari for the ritual slaughtering of the rooster, boys mockingly congratulate each other on the "special" holiday and make jokes about gay people. Most of them, however, do not even know that the Bulgarian calendar has a holiday dedicated exclusively to men.