It grows but does not age, as the motto of Sofia proudly boasts: judging by the city's history, it is easy to see why. Two Neolithic settlements existed here and, in the 1st Millennium BC, the Thracians created another, which later become the Roman Serdica, the beloved "My true Rome" of Emperor Constantine the Great (306-337). The city then became the Bulgarian stronghold of Sredets, the centre of an Ottoman province and, in 1879, the capital of Bulgaria. For centuries, Sofia was the place where kings and dictators ruled, and artists, composers, writers and architects created. Mayors tried to make a difference, while people, architectural styles and ladies' fashions came and went. Fires raged, earthquakes struck, armies attacked, buildings were destroyed and new ones were erected on the ruins.

If you want to learn more about this ever-changing city, however, be prepared for a long walk, both virtual and real. Traces of the history of Sofia are scattered all over the city. In the Archaeological Museum, a former mosque, you will find the Kazichene gold vessel and Roman reliefs of gladiator games, among others. The National History Museum in Boyana houses bits and bobs of post-1878 history, while the city centre has its late Antiquity churches, the Banyabaşı Mosque and the synagogue, and more. The website stara-sofia.blogspot.com is dedicated to the capital's recent history, if you don't mind just browsing through the pictures, as it doesn't have an English version.

You will be forgiven if you come to the conclusion that the city doesn't have a proper museum, where the curious could learn more and in a more consistent way about its history, from its obscure beginnings to its recent past.

The truth is, that Sofia does have a museum; it is simply off-limits, unless you are a state dignitary, a journalist, a Nobel laureate or just know the right people.

The idea of establishing a museum of Sofia appeared in 1928, when the city was celebrating the 50th anniversary of its independence from the Ottomans. The proposal of the Mayor Vladimir Vazov, one of the brothers of the writer Ivan Vazov, a year later the idea transformed into a sort of a multi-purpose institution, which would combine a museum with a city library and an archive. The library gained its own premises on Slaveykov Square in the same year, but the museum remained homeless until 1 December 1941 when it was placed – together with the library and the archive – in a former bank building on Banski Square, by the Central Mineral Bath-house.

It didn't survive long. The building suffered heavy damage in the Allied air raid on 30 March 1944 and whatever survived from the exhibits and the books was removed to the outskirts of Sofia.

The first years after the war were full of incident. The Communists seized power, Bulgaria became a "people's republic" and any opposition – including that within the Communist party – was crushed. Economic shortages coincided with a hectic building programme of factories and infrastructure, and the problems of the Sofia History Museum looked unimportant. The new masters of Bulgaria, however, were well aware of the propaganda value of libraries, where information-hungry citizens would flock. The Sofia City Library re-opened to readers in 1945, and in 1946 it became an independent institution, with numerous branches and a grand central building of its own.

The museum of Sofia wasn't abandoned, but it was not allocated a proper exhibition space either and its treasures, which continued to accumulate, remained unknown to the general public. 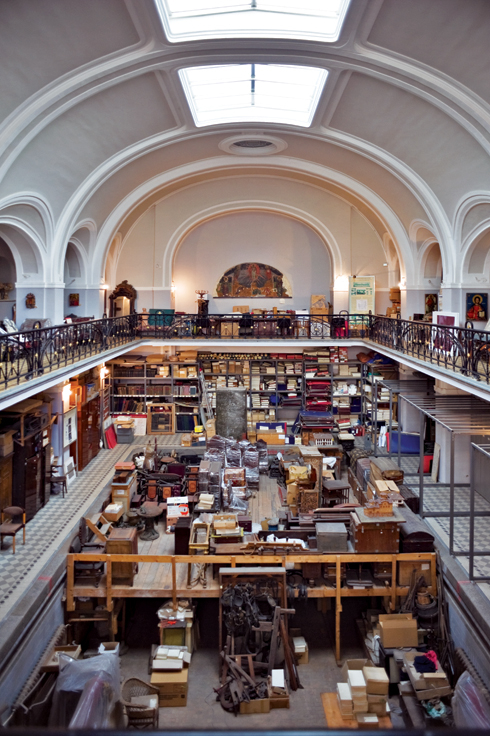 Furniture, paintings, murals and even carriages fill the hall of the former men's pool

The fall of Communism in 1989 did nothing to change the situation, but eventually, in 1998, it was decided that the museum, which was now part of the Old Sofia Municipal Company, would be moved into the former Central Mineral Bath House. Built in 1913 on the hot mineral springs which were the raison d'être for Sofia's very existence, this dilapidated building was closed in 1986. The idea looked promising, as the museum administration was close to the building and the Bath-house had an exquisite interior in the best Secession tradition, with light and spacious halls.

The devil, as usual, was in the details. Due to lack of funding, the renovation works were protracted, postponed, stopped, started and stopped again. By 2012, the facade of the Baths has been restored – or at least that part that overlooks the square – and some of the rooms and halls have received a facelift. One is even used as a temporary exhibition space.

The building, however, is still far from the moment when it will be open to everyone who wants to see the crème de la crème of its 120,000-exhibit strong collection.

A number of the artefacts – it is hard to tell how many – have already been moved in by the staff who, against all odds, are still extremely enthusiastic about the museum. The exhibits are gathered in the double height hall of the former men's pool. This is where the curators take those lucky enough to gain access to the museum.

The halls make you feel as if you've been digitalised and become part of those hidden-object computer games, where your task is to find the shoes, jewellery, dolls and other items from a long list, and where everything looks like the scattered contents of a Victorian pawn shop.

The museum, however, is a treasure trove of real objects with their own story to tell.

The ritual Neolithic clay heart, for example, was used millennia ago by ancient "Sofianites" who offered food and wine to their mysterious gods. The marble Roman hermae, or columns with the head of Hermes, bear witness to an advanced ancient civilisation. The saints in the late-medieval murals from the churches of monasteries around the city follow you with their eyes, because the artists who painted them knew a trick or two and drew them cross-eyed. More than a thousand paintings are kept in metal cupboards which charmingly swoosh on their wheels when you open and close them to see some long forgotten Sofia landscape – a now demolished Muslim cemetery or a city scene from the early 20th Century.

Look around, and you will find a motorcycle of the model used by Communist dictator Todor Zhivkov in his travels around the Sofia area, wardrobes, sagging old chairs, stuffed animals, toys and bicycles, plus a recently restored gold-plated desk. It was a present from Otto von Bismarck to the Bulgarian Prime Minister Stefan Stambolov, and under Communism, painted a dull green, was used as a prop in the Boyana Film Centre. 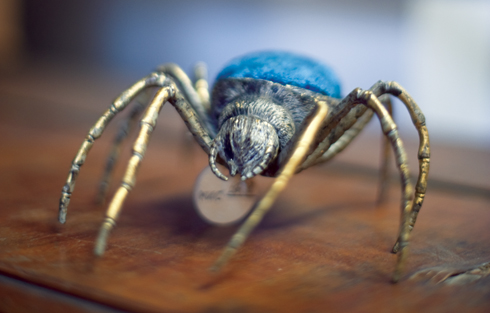 There are other personal belonging of the infamous politician Stambolov in the museum, probably the most weirdly charming exhibits in the whole collection. Kept in cotton-wool lined cardboard boxes are writing tools, a pin cushion and a shoehorn, all in the grotesquely naturalistic shapes of giant insects and spiders.

Some exhibits in the Bath House are not to be found by the pool, though.

One of them is the first Mercedes ever driven on a Bulgarian road. It was bought by King Ferdinand in 1906 after he had seen it and fallen in love with it at the Munich-Berlin race a year earlier. The car was in a state of severe disrepair, but has now been lovingly restored and is on the ground floor of the building.

Another, ironically, is the red star that adorned the former Party House in Sofia during Communism. Actually, it is not the property of the Sofia History Museum (for the whole story, see Vagabond 53-54), but somehow ended up here and the management decided to keep it. The staff in the museum lovingly collect exhibits and seem to have an obvious sympathy for "homeless" artefacts. After all, they understand the feeling perfectly.