In 106 AD, Emperor Trajan (98-117) was returning from his victorious campaign against the Dacians in what is today Romania. These bellicose tribes had finally been conquered and tamed. Their capital Sarmizegetusa was put under sword and fire, and the defeated King Decebalus (87-106) had killed himself to avoid capture. Trajan had finished what his predecessors ‒ and he himself, in an earlier campaign in 101-102 ‒ had failed to achieve. He had secured the Danube lands and the rich gold and iron mines of the Dacians, a precious input into the troubled state economy, struggling under the cost of expensive military campaigns.

Plans of how to celebrate this victory were running through the emperor's head. He wanted more than just the traditional triumphal entry into Rome with his soldiers, his enslaved enemies and his booty. So Trajan proclaimed festivities to last for 123 days and gladly accepted the gift from the Senate of a 30-metre column with reliefs showing crucial moments from the Dacian Wars of 101-102 and 105-106. This column is still one of the major tourist sights in the city of Rome.

What few people know, however, is that Trajan did something else to commemorate his famous victory. He built a whole city, and his reasons exceeded mere vanity.

Trajan knew that an expanding empire needed not only territory and goods. Encompassing lands whose inhabitants had always lived free of the boundaries of civilisation, the empire needed people in newly-conquered territories who believed in the Roman lifestyle. Their faith in it should be so strong and their profit from it should be so tempting that they would advertise its merits among still uncivilised natives and, if a foreign invasion occurred, would die defending it. There were already several legions stationed by the Danube and Trajan sent two more into the Dacian lands, but you need more than soldiers to keep the peace. You need also citizens, merchants, priests, craftsmen, villagers, and land-owners ‒ a little universe of people who believe that their way of life will disappear should the empire collapse.

There were some military camps surrounded by civil settlements by the Danube, but none seemed suitable to become a hub of imperial Roman propaganda, so Trajan decided to create one from scratch. This is how, on an open plain about 50 km south of the Danube, Nikopolis ad Istrum, or the City of the Victory on the Danube, was founded.

A lot of careful planning went into it. The new city was laid out with the obligatory grid of paved straight streets intersecting at right angles. They run from north to south and from east to west, carefully diverging from the cardinal points by several degrees, so that every 18 September when the sun rose and set, it would pour its beams over the streets of Nikopolis, a celestial celebration of Trajan's birthday.

The streets, however, concealed other secrets. Beneath the mighty slabs that covered them, an elaborate system of pipes and canals existed. It fed Nikopolis with fresh water, brought by a 22-kilometre aqueduct, and cleaned it of the putrid contents of the public and private latrines.   In the centre of the city, where the broadest east to west street met its north to south companion, was the forum. Built of marble, adorned with exquisite colonnades and the statues of visiting emperors, including Trajan himself, Hadrian (117-136), Septimius Severus (193-211) and Caracalla (198-217), it was the heart of the city. People flocked there daily to talk, trade, pray and make sacrifices in the temples of the main gods and, occasionally, to attend a show at the odeon, the small covered theatre.

When the city was built, it was far from the borders of the empire, so no one bothered to fortify it. Its best protection were the legions on the Danube. However, this soon proved to be a mistake, as in the 170's the Costoboci ravaged Nikopolis and laid waste to it by fire. The city was subsequently restored, this time with a strong fortress wall. When it expanded beyond its boundaries, an additional wall protected the new neighbourhoods.

Nikopolis prospered. Votive and funeral inscriptions show an astonishing array of people who lived in the city and its environs. Settlers from Greece and Asia Minor mingled with Thracian aristocrats and Italian veterans who, after their long and precarious military career ended, chose to stay there as land-owners. Nikopolis bustled with commoners like stone-masons, builders, carpenters, fullers and cobblers, and with its upper classes of judges, physicians and even a conductor of the imperial choir.

Nestled on the bank of the Rositsa River ‒ Nikopolis even had a small harbour as the river was navigable at the time ‒ the city was the centre of a wider network of settlements and production centres. They fed the local and imperial markets with vital goods. Grain, vegetables and meat were produced by the extensive villas, while bricks and pottery came from two factories in the area.

The best days of Nikopolis fell between 193 and 235 when, after a wise political decision, the city became a favourite of the Severan dynasty. Soon after that time, however, imperial decline, frequent changes of power, increased Barbarian attacks and the Roman withdrawal from Dacia in 270 put an end to its prosperity. The border was breaking up and no one could stop it. In 251, the Goths of Cniva besieged Nikopolis, and the city had a narrow escape when Emperor Decius (249-251) arrived in time to defeat the invaders. On later occasions, the city was not so lucky. In 447 the Atilla's Huns seized it, and the destruction was so great that when a few timid survivors returned and tried to revive the life of the city, they occupied a mere fourth of the former territory of Nikopolis ad Istrum.

However, life at that time was not all fear and invasion. When Christianity arrived, Nikopolis ad Istrum became the centre of a diocese. A group of Goths settled around and inside the city and in the 4th Century were converted by the Goth Bishop Ulfilas. He was helped in this task by the fact that, while living in Nicopolis ad Istrum, Ulfilas had translated the Bible from Latin into Gothic.

By the 6th Century, the invasions of Slavs and Avars became too strong for the citizens of Nikopolis ad Istrum to resist. The garrison of the East Roman Empire, or Byzantium as it is more commonly known, was unable to cope. The city walls could not protect the people inside. Nikopolis had been built to celebrate a victory, not to deal with Barbarians in front of its gates. The citizens finally realised that their once glorious home had turned into a trap. So, when the Avars ravaged the city in the end of the 6th Century, the survivors did not bother to return. They moved into the nearby rocky hills above the banks of the Yantra River and built easily defendable fortresses. One of them was to become Tarnovo, the capital of the Second Bulgarian Kingdom. 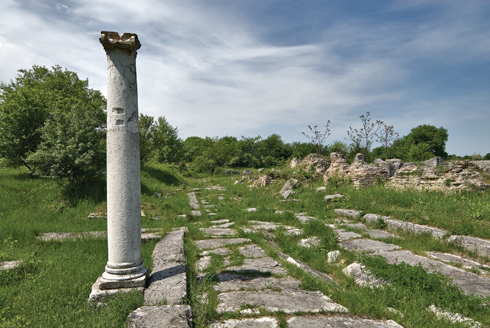 The ruins of the great city fell silent for a few hundred years. In the 10th Century, a group of Bulgarian villagers settled over the ruins, lured by the fertile surroundings and the abundance of ancient building material. They stayed there until the 14th Century, when the Ottoman invasion and the wars that followed reached the region and turned it into a wasteland.

The area was too good a place to live to stay empty forever. When peace returned, another village appeared some kilometres away from the ruins. It is still there, bearing the puzzling name of Nikyup. Is it possible that it echoes that of Nikopolis but in Turkified form? Probably.

The modern village and the ancient city have more than a name in common. You'll see this, when you walk the streets of Nikyup ‒ an amazing number of ancient slabs and altars have been built into the houses and the stone walls.

In spite of the generations of people who freely "borrowed" stones from it, Nikopolis as Istrum is still well preserved for one important reason. It is probably the only major Roman city in Bulgaria proper which has not been overbuilt by later inhabitants. The Roman heritage of Serdica, Philippopolis, and Augusta Traiana, to name but a few, has been lost over the centuries when the modern Sofia, Plovdiv and Stara Zagora were born. Nikopolis ad Istrum was spared that fate.   I

t was largely forgotten until 1871, when the Austro-Hungarian traveller Felix Kanitz rediscovered it. The first excavations were made in 1900, but proper research only began some decades later. In recent years, digs have been held on and off, with archaeology students from Veliko Tarnovo and the UK carrying out the research. Up to now, about one third of the city area has been excavated.

Nikopolis ad Istrum has long been open for tourists, but until recently visiting it was a painful experience. The short dirt track branching off from the Veliko Tarnovo to Ruse road is passable for 4WDs, but even with that type of vehicle driving on it is an excruciating experience. And the track was only the beginning. The ancient streets, canals and building were overgrown with thick greenery and signage was non-existent. In 2011, however, the site received funding from the America for Bulgaria Foundation and the American Research Institute in Sofia. The area was cleared, protective covering was erected over several buildings and some new equipment was bought. The ancient streets, where once hundreds passed by on their daily business, are once more welcoming ‒ this time to tourists.