Wherever you reach some higher ground in Bulgaria there will be a legend about it. And in 90 percent of the cases it will be about some brave Bulgarian maidens who jumped off it to avoid being "enslaved" by Turks.

Kaliakra is no exception. 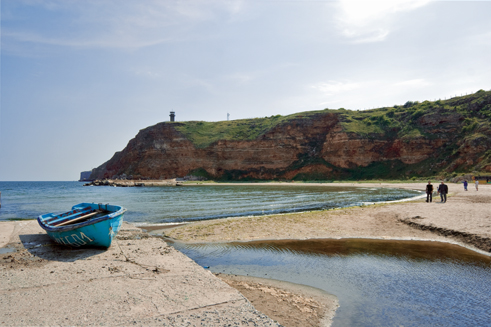 At the end of the 14th Century, Ottoman troops broke through the defences of the Kaliakra fortress and overran it. Forty Bulgarian maidens decided to die rather than fall into their hands, as the fate of any woman caught up in war is always a tragic one. The girls rushed to the end of the cape, where they plaited their long hair into a single braid and jumped into the sea. They drowned or were crushed to death on the rocks below.

One of the first things you see today when entering the archaeological site of Kaliakra is a monument of the 40 maidens.

Rising precipitously 70 metres above sea, the cape is picture-postcard sight, notwithstanding the macabre legend of mass suicide.

Its name, Kaliakra, is a derivative of the Greek kalos, or good, and akra, which can be translated as "cape" or "fortress," an appropriate name for a place of such heavenly beauty and serene atmosphere. Situated north of Balchik, Kaliakra is arguably Bulgaria's most picturesque cape.

There are other legends surrounding it as well. One is the story of St Nikola. He too was pursued by the Ottomans, but instead of giving up, he ran towards the sea shore, praying to God for help. Help was given. When the land was no more and the saint was about to plunge to his death, the firm ground stretched forward, offering support. The longer St Nikola ran, the more the cliff extended. After running for two kilometres, however, St Nikola became tired. He was caught and killed on the spot, and the land stopped its supernatural growth. Cape Kaliakra, the result of this miracle, stands to this day. The saint is said to have been buried at its very end, where a small white chapel marks his grave.

If Muslim legends are to be believed, though, Kaliakra is also the place where the Dervish sage and miracle-worker Sarı Saltık killed a bloodthirsty dragon and saved the inhabitants of the fortress from its appetite for maidens. Later, when Sarı Saltık died – in dragon-unrelated circumstances – he was buried on the cape. For centuries this peninsular has been a centre of religious activity, with people of all faiths coming here to pray.

Legends are only legends, it is true, but the Good Cape has often played its role in history. In 1791, the Russian and Ottoman fleets engaged there in what is now regarded as the greatest naval battle ever fought in the Black Sea. The victory of the Russian admiral Ushakov effectively put an end to the conflict which had started in 1787. It also left the hungry waters around Cape Kaliakra Cape clogged with sunken ships and the bodies of sailors. 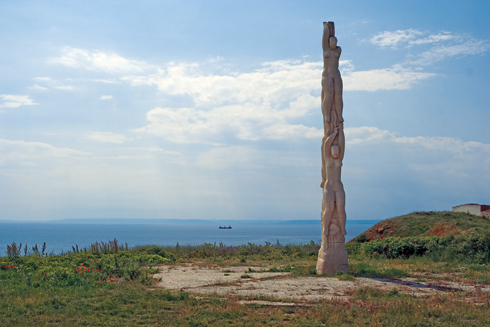 Monument to the 40 maidens of Kaliakra

These stories are grim by any standard, yet Kaliakra deserves the "good" part of its name not solely because of its natural beauty. The long cape shelters a bay whose convenience was noted as early as the 4th Century BC, when the Thracian settlement of Tyrisis was founded here. Several decades later, as Strabo reports, Lysimachus, one of Alexander the Great's generals, hid some treasure in one of the caves here. Throughout Antiquity and the Middle Ages, the fortress on the cape was built, rebuilt and enlarged. In the 14th Century it was already known as Kaliakra and was the capital of an independent Bulgarian principality ruled by the nobleman Dobrotitsa. It was the last piece of Bulgarian land to fall under Ottomans rule, in 1393-1394.

Soon after that, the fortress was abandoned and fell into ruin. The imposing gates and structures you see today in the reserve are a 20th Century reconstruction. In 1856-1857 one of the first lighthouses on the Bulgarian Black Sea coast was built on Kaliakra. The structure you see today, which is still operating, is not the original, as the old lighthouse suffered extensive damage in the 1901 earthquake and had to be demolished.

The main reason for Kaliakra's goodness, however, has nothing, or almost nothing, to do with people and their actions.

It is all about nature.

Kaliakra is one of Bulgaria's first protected natural areas. Covering about 1,800 acres of both land and sea, it is the place where the only steppe ecosystem in Bulgaria exists. Dolphins are a regular presence in the waters and until fairly recently monk seals used to inhabit the caves around the cape. About 50 species of rare birds, including larks, owls, eagles and hoopoes live on and around the cape. Their number is increased by the variety of rare water birds like little bitterns, little grebes and ducks that live in the adjacent marshes of the Bolata and Taukliman reserves. In spring and autumn the area increases in importance even further, as it is on the Via Pontica, one of Europe's greatest bird migratory routes.

In recent years, Kaliakra, its untouched landscape and its wildlife have suffered from the appearance of "high technology."

In 1986, just south of the cape, a group of 10 radio masts was built. Standing between145 and 172 metres high, their purpose was unclear, but probably had something to do with eavesdropping on foreign vessels in the Black Sea. Communism collapsed before their completion, and one of them was never finished. In early 1990 an attempt to lease some of the masts to Radio Free Europe, the BBC and Deutsche Welle failed. Today, however, three Bulgarian national radio broadcasters use them, disseminating radio programmes in northeastern Bulgaria and parts of Romania, Ukraine and Moldova. 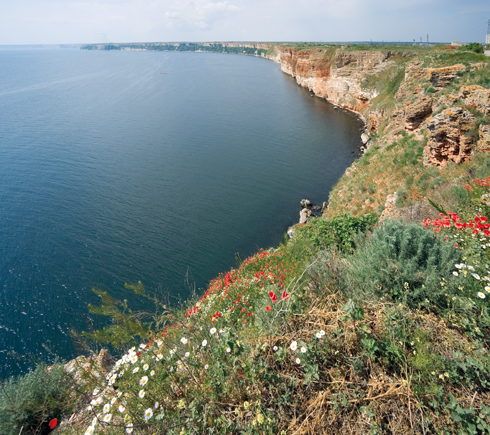 In the 2000s, the first wind generators made their appearance. Now dozens of them stand just on the picture-perfect shore. The inconvenience to photographers who feel robbed of the scenery is only the tip of the iceberg of the problems these generators cause. They should never have been erected here at all, as the territory is a Nature 2000 protected area. They were also built, with the involvement of the Kavarna Municipality, without the obligatory analysis of their impact on the ecosystem. The European Commission has even started proceedings against them, but for now they still stand, their giant blades swirling in the air and scaring off the birds who live on or pass by Kaliakra, the Good Cape.