Travelling in Bulgaria can become a surreal experience when you look at the expensive cars parked in front of shabby apartment buildings, at the stunning landscapes dotted with relics from either Antiquity or Communism, and when overwhelming hospitality alternates with plain rudeness and paranoid suspicion.

Few places in Bulgaria, however, can rival Dimitrovgrad in strangeness. It seems to epitomise best the three main characteristics of 21st Century Bulgaria outside the gated communities and the five-star spa hotels: chalga, tackiness and post-Communist destitution. 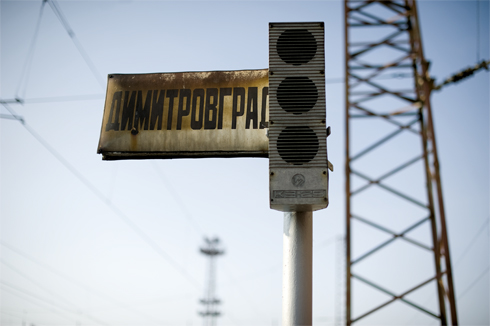 This city in the Bulgarian south-east was purpose-built in the late 1940s on some of Bulgaria's most fertile land to become, with its huge chemical plants, the pride of Socialism's planned economy. After the democratic changes Dimitrovgrad gained notoriety for its buzzing open-air market selling cheap Turkish and now Chinese goods, one of the largest in the Balkans. If you have ever wondered how chalga left the taverns and went mainstream, the answer is again Dimitrovgrad, where in the early 1990s a business-savvy hard rock fan turned what was a niche musical genre into an industry.

It all began, as the official version of the story goes, on 10 May 1947, when 40 youths arrived where the three sleepy villages of Rakovski, Mariino and Chernokonevo had existed from at least the 19th Century. The youths announced their plans to build a "city of dreams," where young people would live and work in brand new industries. On 2 September 1947, Georgi Dimitrov, the first Stalinist dictator in Bulgaria, proclaimed officially the birth of the new city. Thousands of young people from every corner of Bulgaria enthusiastically embraced the idea and flocked to this previously unknown spot. 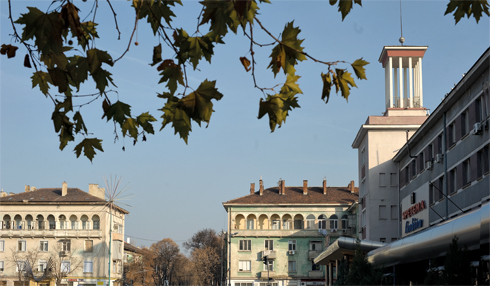 They were about 50,000 and were paid nothing or next to nothing. In spite of this, within a couple of years the City of Youth did appear – a new, almost utopian (at least what that meant in the late 1940s this side of the Iron Curtain) city of wide straight streets and spacious squares, of modern apartment blocks and administrative buildings, of leafy parks and huge factories.

The city was officially named Dimitrovgrad, the City of Dimitrov.

The three villages were swallowed up by the new city as thousands of workers came to settle in Dimitrovgrad. In 1956, less than 10 years after its birth, about 34,000 people lived there.

The true reasons for Dimitrovgrad's outward appearance have to do more with state politics than with the enthusiasm of the young "brigade" members. 1947 was the year when the Communists strengthened their grip on Bulgaria, taking full control of political, public, economic and religious life. Forcible collectivisation of farming started, and plans for a rapid industrialisation of agrarian Bulgaria were put in motion. Those were considered to be a shortcut out of the troubled post-war economy. The enthusiasm of the young people was cleverly tapped, as they provided cheap labour for important industrial and infrastructure projects (more on the brigade movement here). Thus, Dimitrovgrad was conceived as a larger-than-life showcase for the ability of the new regime to rule the lives of thousands of people. The former fields became sites of heavy chemical industry, and the city continued to grow and attract settlers. In 1985, Dimitrovgrad was home to about 54,000 people. 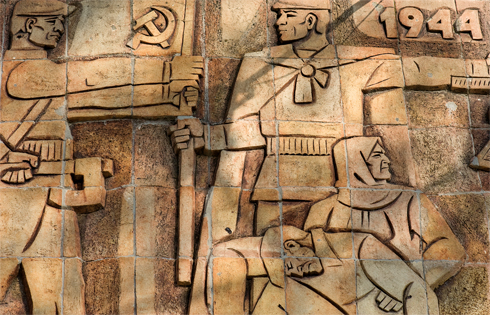 Dimitrovgrad was the only city in Bulgaria, and probably in the Balkans, built entirely according to Stalinist urban planning and architectural rules. The "historical" core of Dimitrovgrad, built in the late 1940s and in the 1950s, is now a fine collection of characteristic Stalinist architecture, with its grim façades and colonnades. Most of it still survives, blighted by the trappings of modernity, such as air-conditioners, plastic window frames, garish shop and café signs, and peeling plaster. The Stalinist atmosphere, however, is still here, making the centre of Dimitrovgrad probably the finest open-air museum of early Communism in the Balkans.

Interestingly, one of the brigade members was a man from a village near Gabrovo, on the northern slopes of the Stara Planina. His name was Penyo Penev, and in 1947 he had just published his first poems. Like many of his indoctrinated fellow brigade members, Penev sincerely believed in the bright Communist future of Bulgaria. He settled in Dimitrovgrad and started a literary career, writing regime-flattering but honest poems about the creation of the new lifestyle and the new Bulgaria. 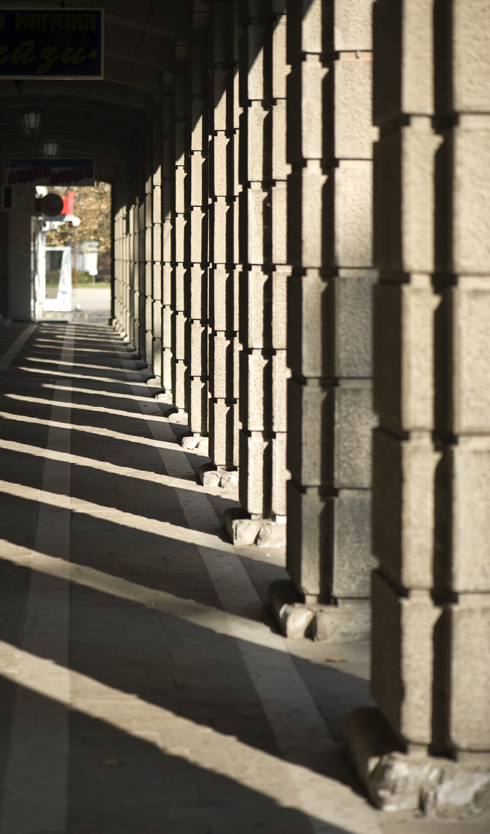 It all ended in 1959 when – supposedly due to depression triggered by disillusionment with Communism – Penev committed suicide at the age of 38. Obfuscating the reasons for his early death, the Communist Party turned him into an icon, squeezing his poems into school textbooks. The memory of him as a rebel against the system, however, somehow managed to survive and ensured the continuing popularity of Penev, even after the fall of Communism. While other "bards" of Communism were largely forgotten after 1989, Penev is still read. The flat in Dimitrovgrad where he lived and where he killed himself is a museum, and the poet's humble statue on the pavement is a favoured place for children to climb and for graduates and newlyweds to be photographed.

Dimitrovgrad suffered the fate of most industrial centres in Bulgaria after the fall of Communism in 1989 and the collapse of its planned economy. Some of the factories closed or made workers redundant, and many people left for Plovdiv, Sofia or abroad.

However, in the early 1990s Dimitrovgrad reinvented itself. Situated on the railway from Istanbul to Sofia, and close enough to the border between Bulgaria and Turkey, the city became the focal point of an open-air market where goods were bought and sold by an international crowd of entrepreneurs from all over the Balkans, and even from Russia. It was here that cheap clothes and shoes made in Turkey, kitchen utensils, packaged food and everything else imaginable found a distribution network. By the beginning of the 2000s, in pre mall-and-hypermarket Bulgaria, Dimitrovgrad was the trading heart of the country rivalled only by the bazaar in Ilientsi, Sofia.

The Dimitrovgrad bazaar has changed since then. The tin stalls are now numbered and arranged in alleys and streets and, as everywhere else, the goods sold there are mainly Chinese. Prices are still low and the bazaar is open from Friday to early Sunday afternoon. Come at any other time and you will find it closed, deserted and utterly unattractive.

The chalga industry, however, is Dimitrovgrad's main claim to fame. 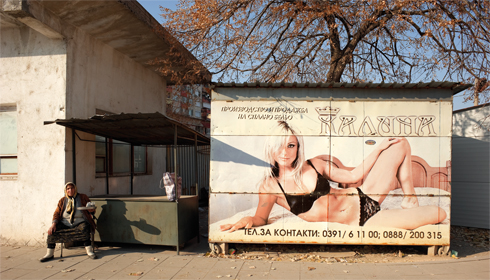 The first steps towards turning the city into what is now called The Mecca of Chalga were taken as early as 1990, when hard rock fan and engineer Mitko Dimitrov started a small company. He called it Payner (a deliberate misspelling of Pioneer) with the idea of recording audio and video music cassettes. This coincided with the mass spread of early chalga music, usually performed in restaurants and distributed mainly through bootlegged and pirated MC tapes. As the popularity of chalga grew, Dimitrov spotted its business potential. He hired professional musicians, lyricists, sound technicians and video directors, and went into the production business. Soon, Payner became the mightiest chalga producing company in Bulgaria, broadcasting videos of its finest and not-so-finest stars on its own TV channel.

Few traces of the chalga lifestyle are visible in the city itself – or at least they are no more obvious than in any other Bulgarian city. In daytime, the cafés in the centre stick to lounge and pop music and when walking the streets you can even come across the odd heavy metal or hard rock lover, with his Black Sabbath or Dimmu Borgir black T-shirt and military boots. 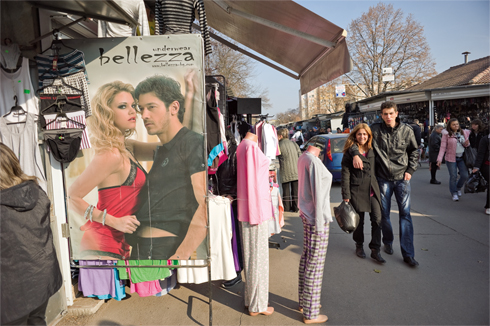 When Communism collapsed, many Bulgarian cities parted with their Communist names and reinstated their former ones – Tolbuhin became Dobrich, Stanke Dimitrov is once again Dupnitsa and Mihaylovgrad even embraced its Roman-era name of Montana. But not Dimitrovgrad.

If you come looking for the statue of Georgi Dimitrov, however, you will be disappointed. It is no longer in the city centre. After 1989 it was taken down and discarded in the town's nursery garden where it has spent two decades lying face-down.

Things are soon going to change. In the summer of 2012 Dimitrovgrad's city council decided to create "an alley of Communist art" in the Maritsa Park, with the Dimitrov statue as its centre piece. At the time of writing, the statue has still not been installed. 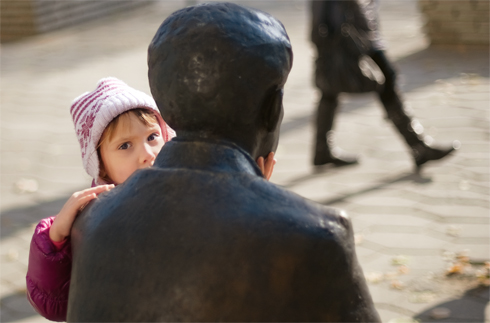 Poet Penyo Penev famously described the enthusiasm of the young builders of Dimitrovgrad and what was considered to be the new Bulgaria in one of his poems, "Me, One of the People":

I do not dream

And about easy roads, but I dream about a quilted coat

For the wintery day.

To all eternity, what was built here 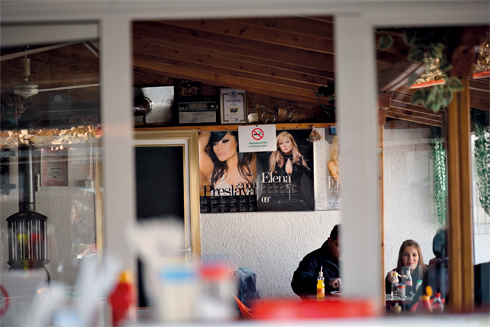 Some of the greatest stars of chalga music in Bulgaria are under contract to Dimitrovgrad's Payner company, and many hopefuls aspire to sign with it. Payner is the producer of household names such as Andrea, Gloria, Ivana, Kali, Preslava and Veselin Marinov. The company has its own TV station, a nation-wide chain of clubs and every year organises concerts attracting thousand-strong crowds. Here is an extract from one of Ivana's greatest hits, the 2000 cult classic Sto patrona, or A Hundred Bullets:

I'll drill you with a hundred bullets

If I catch you playing around

'Cause you say you're going hunting

But you are having sex instead.