What is the best way to help when a war or a natural disaster have deprived hundreds of thousands of food, homes and sanitation? Throw money at the problem? Send for the Red Cross? Call Bono?

About 80 years ago, a Jewish Frenchman found the correct solution. From 1926 to 1932, René Charron, an envoy of the Finance and Economic Research Centre in the League of Nations, helped 250,000 Bulgarian refugees from what are now Romania, Greece and Macedonia to start a new life. His idea was simple and effective. He secured an international loan and spent it on the building of new, practical and inexpensive houses, on buying livestock and updating public infrastructure.

To grasp the change that Charron wrought, you have to imagine Bulgaria after the Great War. The country had fought in three separate wars and lost two of them, dubbing them national catastrophes. The refugees arriving in Bulgaria from Aegean Thrace, Dobrudzha and the borderlands with the Kingdom of Yugoslavia were one of the most visible reminders of the losses. Their sad caravans carried dispirited people who had neither homes, nor work or hope. They settled where they could or where they were told by the government – on the outskirts of cities, towns and villages, including Sofia. They built shanties and struggled to survive.

The government was incapable of helping them; it could barely help itself.

On 27 November 1919, in the Paris Neuilly-sur-Seine neighbourhood, the embittered Prime Minister Aleksandar Stamboliyski had signed a devastating peace treaty. Bulgaria lost its access to the Aegean and the South Dobrudzha. Its army and police forces were severely downsized. Reparations of 2.25 billion gold francs to the victors were imposed. The annual debt payment consumed 55 percent of the state budget and, even after restructuring in 1923, it was still a considerable burden. Moreover, the government found it very difficult to obtain an international loan, as it needed the prior approval of the victors.

The League of Nations and René Charron helped change this dire situation.

That ill-fated organisation, created after the Great War with the intention of putting an end to all war, completely failed at its original task. In certain areas, however, it really was a force for good. In 1925, for example, the League reacted quickly to the Greek invasion of Bulgaria and forced Greece to pay compensation for its "unprovoked aggression."

The next year, commissioner René Charron arrived with the task of evaluating the seriousness of the Bulgarian refugee problem. He did just that and offered his solution – an international loan. The League intervened and the money was secured.

On 22 December 1926 the Bulgarian government signed the so-called Refugee Loan for 2.4 million and $4.5 million with British, American, Swiss, Italian and Dutch banks. The government provided guarantees for the repayments through the excise duties on salt, spirits and soft drinks, and pledged to give 132,000 hectares of arable land to the refugees.

Much of the Refugee Loan was spent on several major infrastructure projects, including the construction of railways. About 2 billion leva, however, went on housing projects. Charron himself designed five different types of a single-storey house, which were allocated depending on the livelihood of the future occupants and on the size of their families. During the programme, 10,231 houses were built all over Bulgaria, more than 6,000 of them in the South East, where most of the refugees had settled. The houses were small but cleverly designed, airy and clean, and built from cheap and locally produced materials. They cost between 33,000 and 64,000 leva. 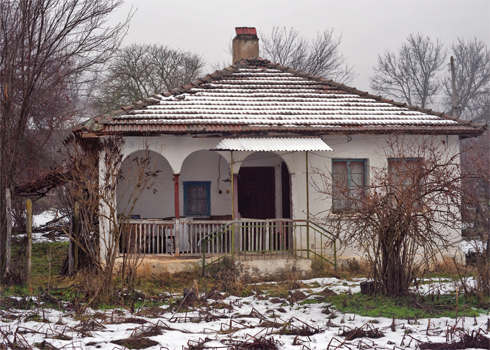 The effects of the Refugee Loan extended far beyond the borders of Bulgaria. It was a clear breach of the terms of the Neuilly-sur-Seine Treaty and impinged on the exclusivity that French banks had exercised for years as the main Bulgarian creditors. In 1928, again with the support of the League of Nations, the Bulgarian government secured another major international loan.

René Charron stayed in Bulgaria, supervising the spending of the Refugee Loan, until 1932.

Surprisingly, little is known of this man who had such a profound effect on inter-war Bulgaria.

He was born in 1894 into a Jewish family. The date of his death and his career outside his stay in Bulgaria are not known. Little bits of – often anecdotal – information indicate that Charron was living in Switzerland during the Second World War, and probably he continued working for the Geneva-based League of Nations. His name appears also in some postwar documents of the United Nations, which absorbed several of the League's departments.

If these reports are true, it is easy to imagine that Charron must have been an outspoken man. In 1932, for example, Bulgaria threatened that it would stop repaying its international debt. The bluff, however, was not taken seriously, unlike that of Greece. The Bulgarian ambassador to Paris asked Charron why the two countries were treated so differently. "Because Greece won the war," Charron replied.

He was probably an American agent during the Second World War. A telegram dated 27 February 1943, and written in code using nicknames for prominent Bulgarians such as King Boris III and the banker Atanas Burov, is in the Allen Dulles Archive. It reveals Bulgaria's uneasiness with its Nazi ally. The information reached Dulles, the founder of the American intelligence service, through a source in Switzerland, disguised under the code name "492."

According to the notes in the archive, the person behind the number was a certain French national named René Charron, a regular Dulles informer. The same René Charron had another nick-name, "Boarman."

Whether René Charron, the League of Nation's financial advisor, and René Charron the informer were the same person is not clear.

A second piece of anecdotal Bulgarian information, however, is telling. In 1943, Hitler was urging King Boris to deport the Bulgarian Jews. The king was at his wits end and approached René Charron, who was in Switzerland at the time. Charron advised against deportation and leaked shocking information about the fate of hundreds of thousands of Jews from Eastern Europe in the extermination camps. The Jews from Bulgaria were not deported.

The most significant legacy of Charron was "his" houses. Very few of them are still standing; there are some in places like Ahtopol on the Southern Black Sea coast or the village of Mladezhko in the Strandzha. His name, however, is still remembered by the elderly generations of every town and village where his sharonski kashti, or Charron's houses, as they are colloquially known, once meant a new life for so many people. And in the town of Tsarevo, where the Strandzha meets the Black Sea, there is now a street named after the French Jew, in loving memory from the Bulgarian refugees.