A stag mosaic from the 6th Century, the Small Basilica, Plovdiv © Anthony Georgieff

"To the Small Basilica, please," we say to the taxi driver we hail in the centre of a warm, autumnal Plovdiv. Then we realise. The driver is very unlikely to know the whereabouts of Bulgaria's latest archaeological museum, only one day after the official opening.

"Okay," the driver says and five minutes later we arrive in front of the Small Basilica, a low, red-brick building huddled between the apartment blocks of Marie Louise Boulevard and the houses of the old Hadzhi Hasan Mahala neighbourhood. "It's good to have some of the archaeological treasures we have here exhibited at last," the driver mumbles, before leaving.

Plovdiv lays claim to at least 7,000 years of history, but only a fraction of it has been preserved and even less can be visited – mainly in the old centre. There, the remains of the Roman theatre, stadium and forum rub boulders with early-Ottoman mosques, 18th Century mansions and fin-de-siècle houses. All of these have been on the tourist map for decades.

The Small Basilica, however, is an exception. About 10 minutes easy walk from the Central Post Office, it was virtually unknown to the wider public until this September.

Built in the 470s beside the then eastern fortification wall of Philip­popolis, the Small Basilica was situated in the city's richest neighbour­hood. The richly decorated mansions of the wealthiest citizens surrounded grand public buildings like the oldest synagogue in the Balkans, and the episcopal church.

This part of the city was abandoned at the end of the 6th Century, and during the following centuries was plundered as a source of building materials. By the 1980s, when large-scale construction of apartment blocks started in the area, the remains of this once prosperous neighbourhood were completely covered by earth and buildings.

Some mansions and public buildings came to light under the spades of archaeologists, but only a handful of them were deemed important enough to be preserved.

However, as happens with many other archaeological sites, chronic lack of care had turned the Small Basilica into a wasteland covered with overgrowth.

In 2010, everything changed. The America for Bulgaria Foundation initiated a project to restore the mosaics of the Small Basilica and bring them back to the church, with the site becoming an archaeological museum. The Bulgarian Ministry of Culture and the Plovdiv Municipality joined the project and, over the next four years, these organisations spent 1.53 million leva on the revival of the Small Basilica and its mosaics.

A team of restorers, led by Associate Professor Elena Kantareva-Decheva, cleared, reinforced, conserved and restored the mosaic floors. The ruins of the church and the nearby mansion, street, fortification wall and tower were carefully restored. A protective cover to ensure optimal temperature and humidity for the mosaics was built over the remains of the church. 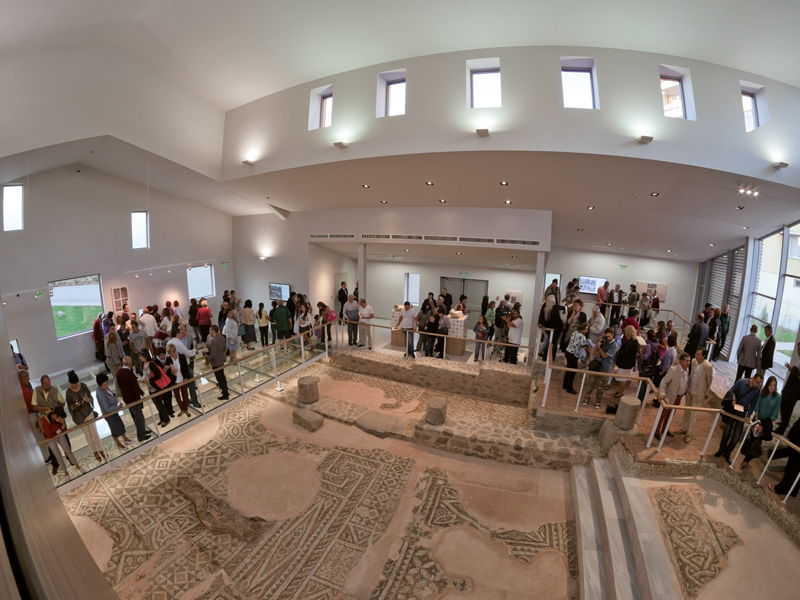 More than 2,500 people visited the Small Basilica in Plovdiv on its opening day

This is how Bulgaria's most advanced archaeological museum came into being.

An estimated 2,500 people visited the Small Basilica on its opening day, 20 September, to see the carpet of mosaics spreading under the thick glass floor. Even more people came the following day.

The mosaics of the Small Basilica are visually arresting, but their historical and artistic value exceeds this. They have revived one of the most interesting footnotes in the history of Late Antiquity.

In front of the altar, a partially destroyed inscription mentions 'a victor and a patrician.' This was Basiliscus, a military commander of the Roman province of Thrace in the middle of the 5th Century and a brother-in-law of the Emperor Leo I. In 471, when the Goths in Thrace revolted, Basiliscus saved Philippopolis. The grateful citizens built the Small Basilica to commemorate their salvation.

Then why is the name of Basiliscus missing from the inscription in the Small Basilica? The answer lies in events that unfolded soon after it was finished. In 474, Emperor Leo I died and his son-in-law, Zeno, assumed the throne. Unhappy with this outcome, Basiliscus deposed Zeno from power, in 475. After only a year, though, Basiliscus lost his support both among the common people and the patricians, and Zeno returned to Constantinople to rule as emperor for the next 15 years.

Zeno punished his rival according to the standards of the day. Basiliscus was left to die of thirst and hunger, and his name was deleted from historical records, statues and official inscriptions. It was deleted, too, from the floor of the Small Basilica.

Several years later, the Small Basilica was destroyed by fire. The damage was too severe to repair and the citizens of Philippopolis rebuilt the church from scratch. The floor of the new basilica was covered with bricks, but the building acquired another show-stopper – the baptisterium.

It was built by the north-east corner of the Small Basilica to accommodate the large number of people converting to Christianity. The room had a deep marble baptismal pool in the shape of the cross, with running water. Above it, four marble pillars supported a marble cover. The floor was decorated with mosaics of pigeons and grazing stags.

Only two of the four mosaics from the baptisterium have been preserved, but even today, after all the centuries, they astonish with their vivacity and bright colours.

If you want to learn more about the Small Basilica and ancient Philippopolis, visit www.romanplovdiv.org.

The mosaics in the Small Basilica were made by local craftsmen who used marble, red, black, green and yellow stone, and ceramic fragments to create elaborate designs and images. These images also had symbolical meanings and, if you know how to read them, the mosaics of the Small Basilica will share their secrets with you. 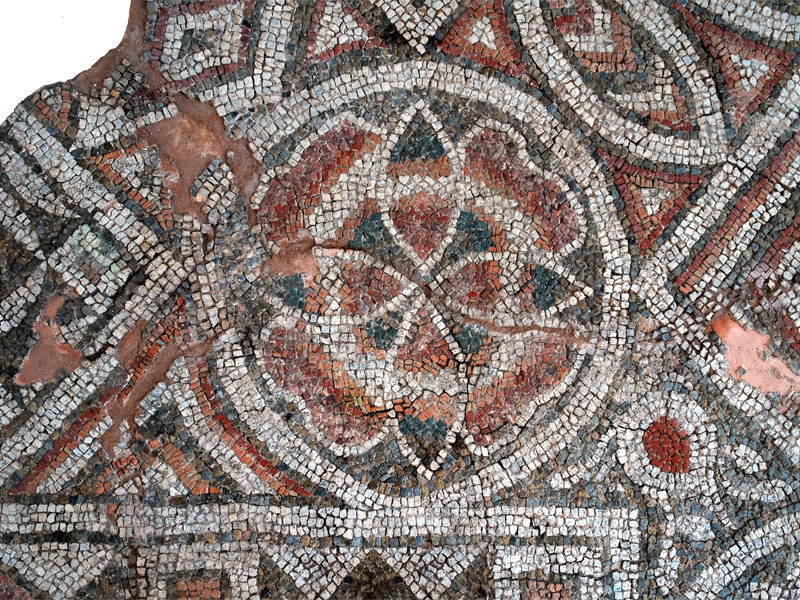 The rosetta predates Christianity. For Christians, it symbolises the blood of Jesus 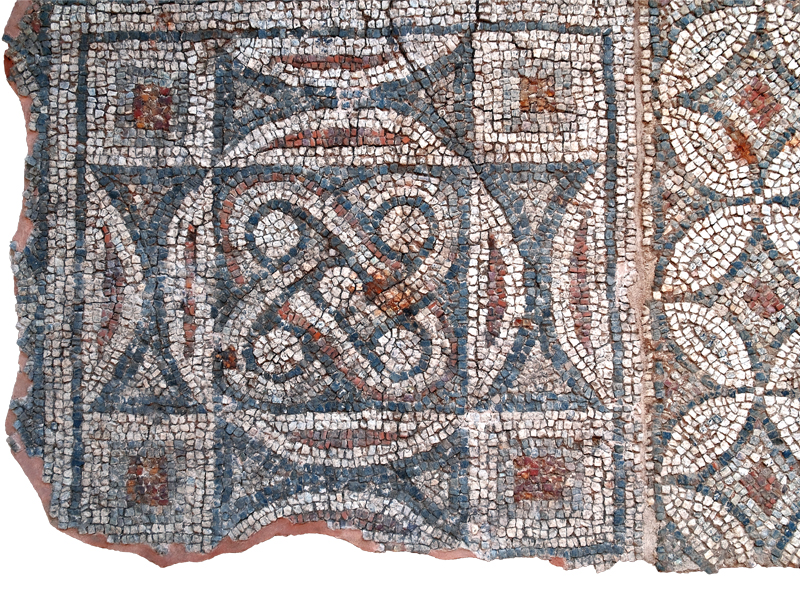 The Solomon's Knot is an ancient symbol with many meanings, and can be interpreted as a depiction of eternity, and of faith 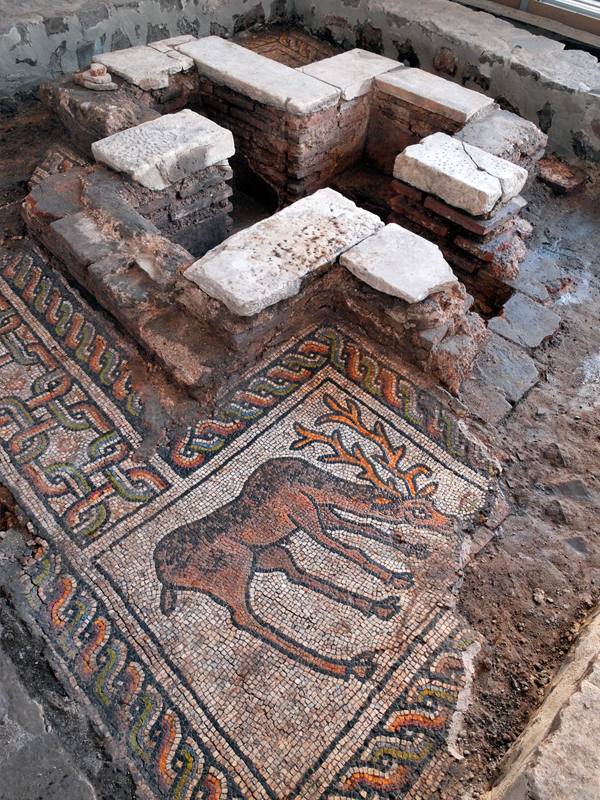 The stag represents the soul of the Christian, striving for faith and truth 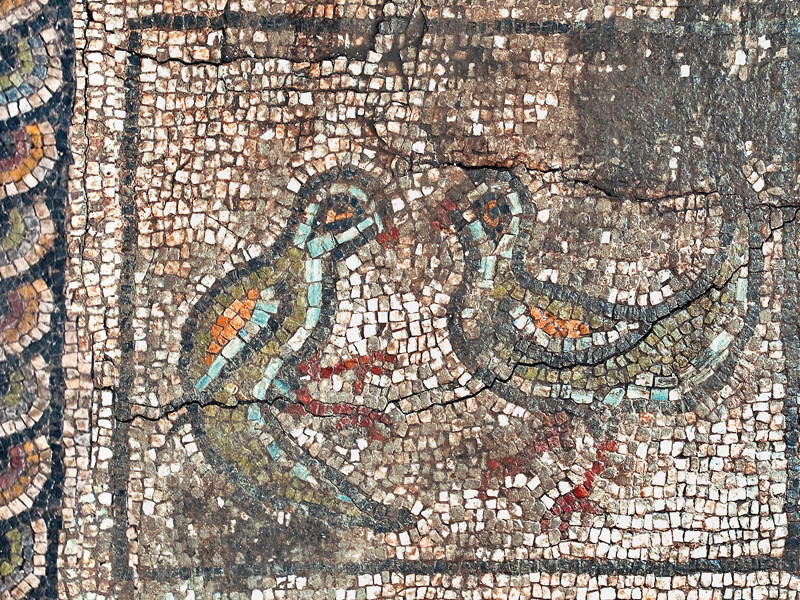 The dove symbolises the Holy Spirit, who appeared at the baptism of Jesus in the Jordan river 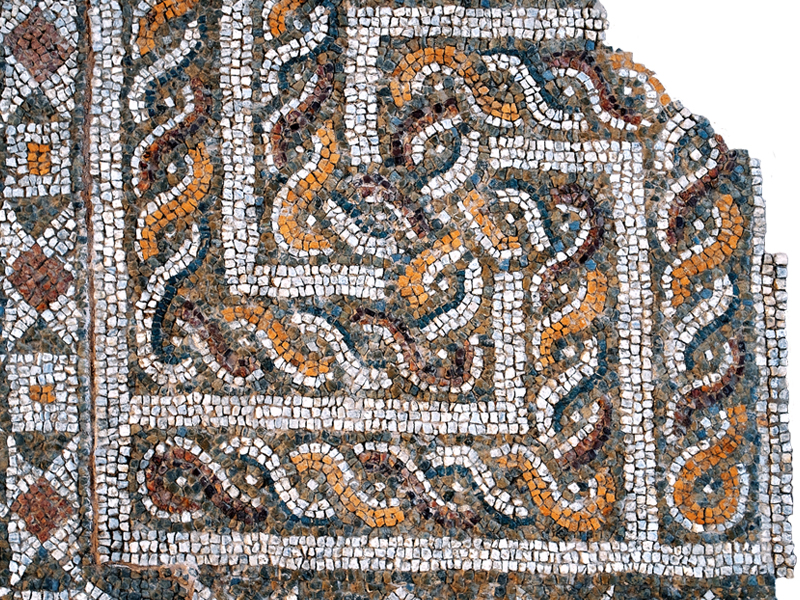 The swastika is an ancient cosmic symbol, and the meander is interpreted as a simplified labyrinth 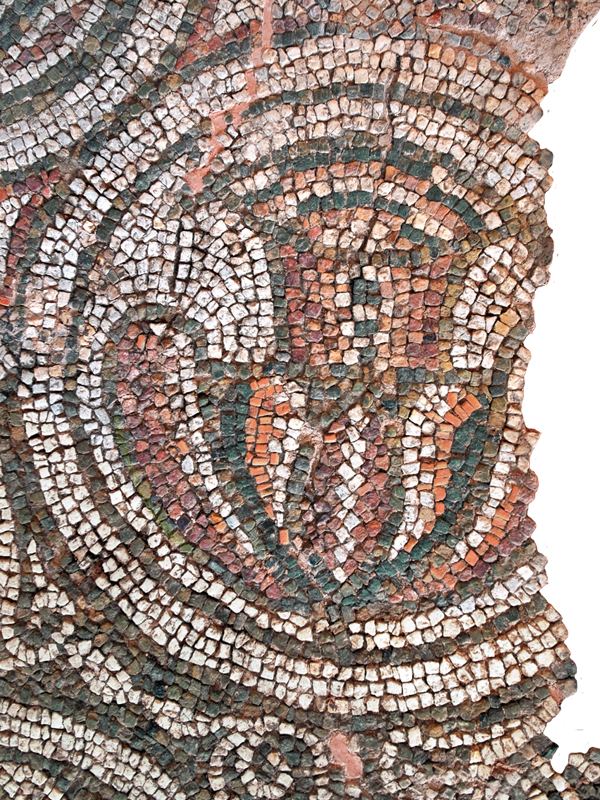 The vase represents the vessel where heavenly myrrh is collected 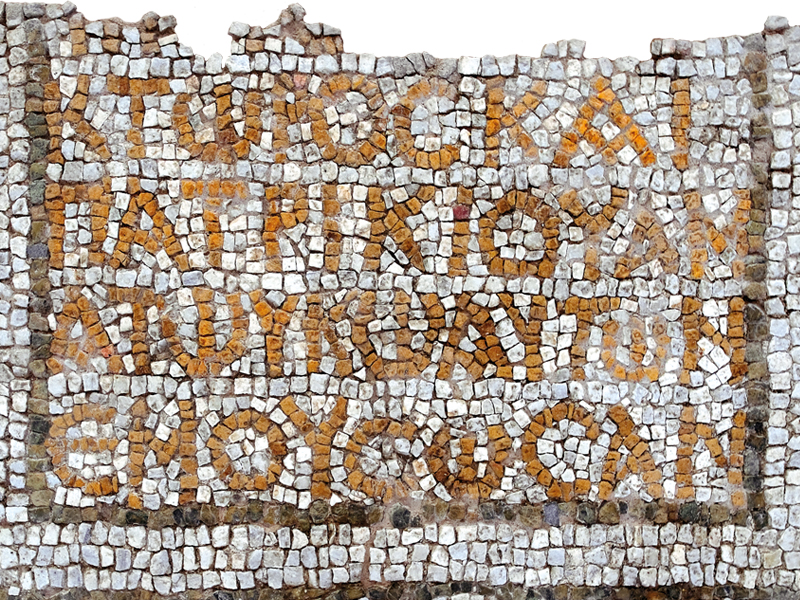 "... victor and patrician, together with their families" read the surviving lines of the inscription of Basiliscus