The name of Sinemorets, Bulgaria's last village on the southern Black Sea coast before Rezovo and the border with Turkey, is relatively new. It means "Blue Sea" and was given in 1934, as a replacement for the older name of the village, which was derived from the Greek galasios, or azure.

The village itself is anything but picturesque – a maze of holiday properties built in the past 15 years – but its surroundings are true to the spirit that the name Sinemorets evokes. Perched on a rocky peninsula by the mouth of the Veleka River, Sinemorets is surrounded by lush forests and probably the last unspoilt beaches on the southern Bulgarian Black Sea coast.

Sinemorets's northern beach seen from the eco path to Ahtopol

The pristine landscape preserved around Sinemorets is the result, surprisingly, of the Cold War. Under Communism, the village was in the border area with NATO-member Turkey, and access was forbidden without a special permit. This was hardly good for tourism, and the beaches of Sinemorets stayed empty.

Things changed after the collapse of Communism in 1989. People were now allowed to enjoy the unspoiled nature of Sinemorets. The first to arrive, initially in small groups, were Sofia intellectuals and new-agers seeking refuge from the crowds.

The Sphinx, at the northern beach 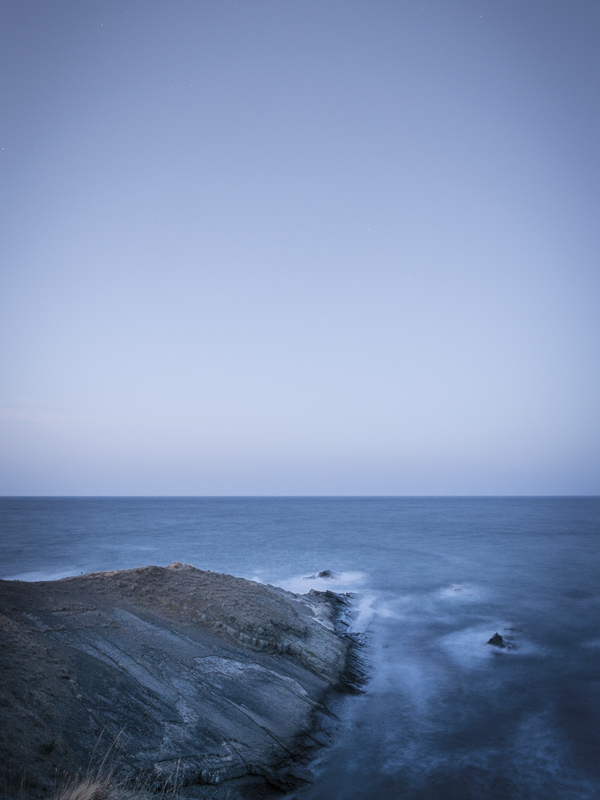 The locals, however, were eager to finally cash in on the beauties of Sinemorets. In the early 2000s, a huge hotel was built right on one of the most beautiful beaches; an architectural monstrosity featuring a duck and a ram's head as roof decorations.

Soon, construction took over Sinemorets, turning the once sleepy village into a concrete nightmare of new hotels and streets filled with construction debris. The crowds grew bigger and the intellectuals were replaced by ordinary Bulgarians and some German tourists. 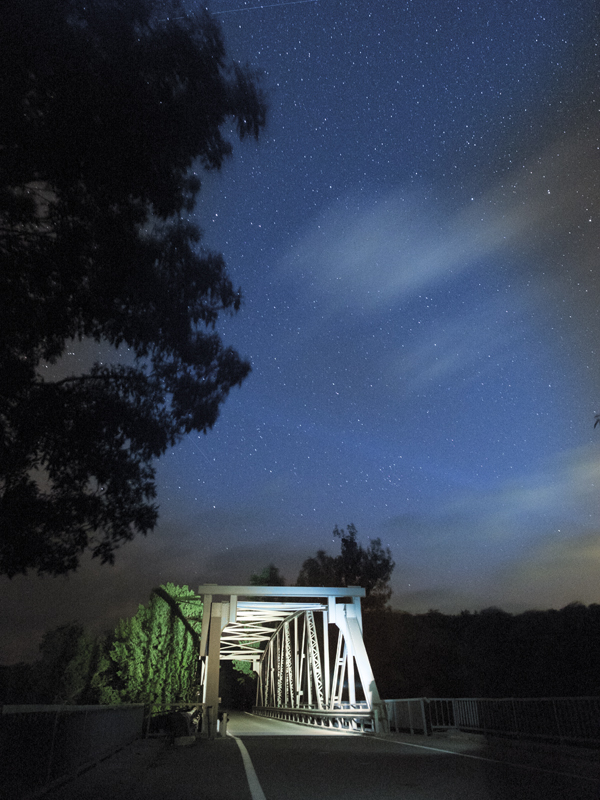 The outskirts of Sinemorets remain untouched, as they are part of the Strandzha National Park.

The northern beach at Sinemorets is where the Veleka joins the Black Sea, forming the only fresh water protected bay in Bulgaria. The beach is extremely beautiful – the river flows from the thickly forested slopes of the Strandzha, and empties into the sea through a narrow channel at the northern end of the bay. Picturesque cliffs overlook the spot, and one of them, at the southern end of the bay, is called The Sphinx because it resembles, well, a sphinx. 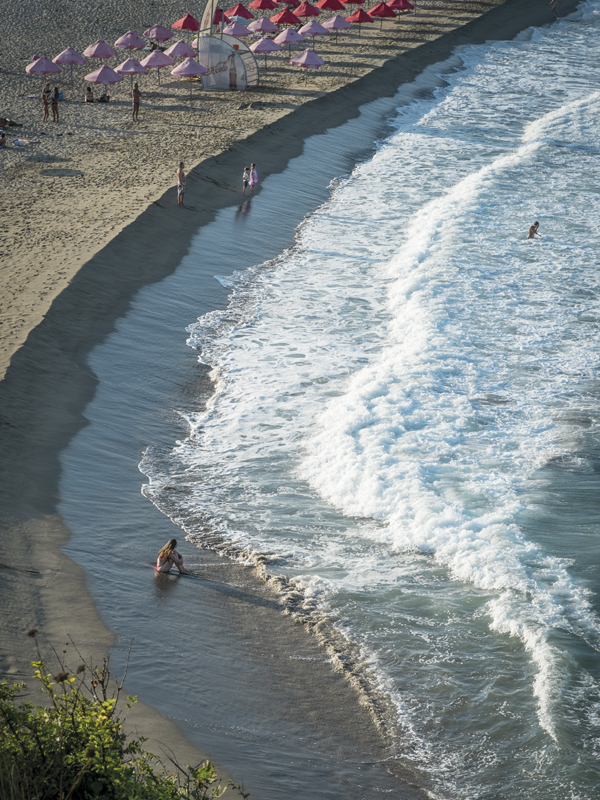 Umbrellas and crowds at the southern beach, where, according to local lore, the sea simultaneously pushes and throws you

This pleasant beach encourages some to camp at its northern end. When swimming, though, you have to be cautious as some of the river water sneaks into the sea under the sand spit, creating a strong undercurrent.

The southern bay at Sinemorets is called Butamyata. This name is a Bulgarian corruption of the older Greek name, Potamia, but according to local urban etymology Butamyata is 100 percent Bulgarian in origin and explains that the sea at the beach simultaneously buta, or pushes, and myata, or throws, everyone who enters it. 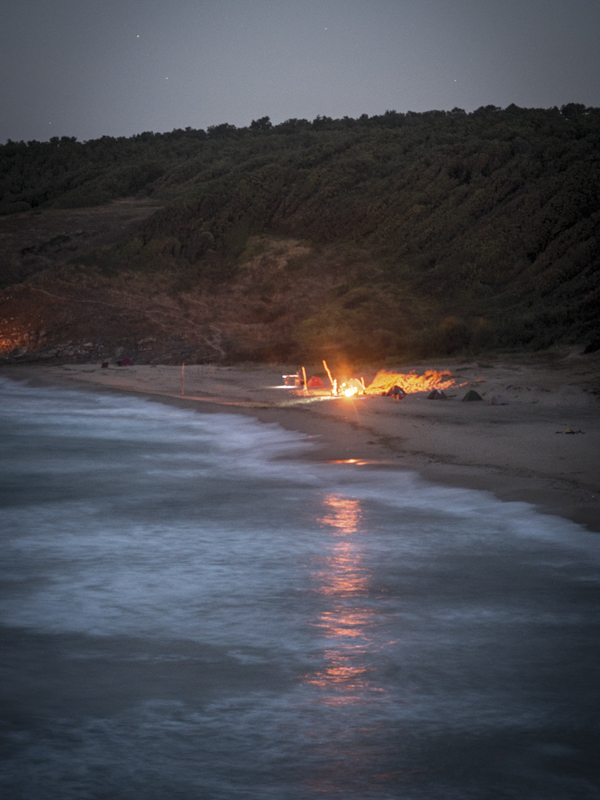 Swimming here, however, is easier than at the northern beach, and it shows. The southern beach is more developed, with lines of beach umbrellas on the sand, and a tavern booming out music, and the strong smell of fried fish.

When you are at Butamyata, you might notice a steady stream of people climbing up and down a tiny path in the rocks. Follow them. This is the beginning of the Sinemorets-Rezovo eco path, which leads along the shore and explains, with detailed information boards, the diverse and picturesque geological phenomena sculpted by the sea waves out of volcanic eruptions that occurred about 80 million years ago.

The crowds in the first few kilometres are not interested in the geology as most of them only take the eco path as it leads to the last undeveloped beach on the southern Bulgarian Black Sea.

Listi Beach is a long, pristine stretch of sand, protected by rising cliffs, the Strandzha forest and the fact that there is no track leading to it. Nature lovers and campers are a fixture here, staying for days in tents and, when you see the beach, you will understand why.

Sinemorets's southern beach: "Tits You Can Find All Over The Beach. Pizzas Only Here"

Silistar Beach, the last on Bulgarian territory, is farther along the eco path, but it can be reached by car, via the road to Rezovo. It is beautiful, but far more commercialised, with a camping site, a tavern and a forest of umbrellas taking up a good portion of the sand.

If you love walking, there is more around Sinemorets.

Another, and very easy, eco path starts from the northern end of the north beach and leads all the way to Ahtopol. Like the eco path to Rezovo, it incorporates beautiful scenery and more volcanic geology.

For the more adventurous, there is the eco path upstream of the Veleka River. Follow it for the experience of wild forests, clear water and the joy of reaching the village of Brodilovo, deep in the Strandzha, on foot.

Read 8591 times Last modified on Wednesday, 29 June 2016 11:52
Published in High Beam
More in this category: « GOING DOWN THE DANUBE BULGARIA FROM THE WINDOW OF A TRAIN »