BULGARIA FROM THE WINDOW OF A TRAIN

Unusual, yet rewarding way of exploring countryside and its people

For a foreigner, getting lost on Bulgaria's railway network is easy. You just have to follow the signs at Sofia Central railway station. Or try to decipher the Bulgarian-only timetables at whatever station fate has landed you at. Or try to understand the commands of sleeping coach conductors who think they will make themselves clear to foreigners if they speak Bulgarian slowly and in a loud voice.

Gone are the Communist-era days when trains were new, relatively clean and could cover the Sofia-Burgas distance in less than five hours. At that time trains had good bars and decent food. Now the coaches are are old and rusty, and often sprayed with dubious graffiti. There's no WiFi and you can only buy tickets online for a couple of destinations (a recent innovation that hasn't really caught on). In the summer, they lack air-conditioning, and in wintertime they are either boiling hot, or freezing cold. They run late. They move slowly. And there's no restaurant car on even the long-distance trains.

Yet, to hop on a train and start exploring Bulgaria can be a fascinating experience. It is a sort of crash course in getting to know Bulgaria and the Bulgarians. 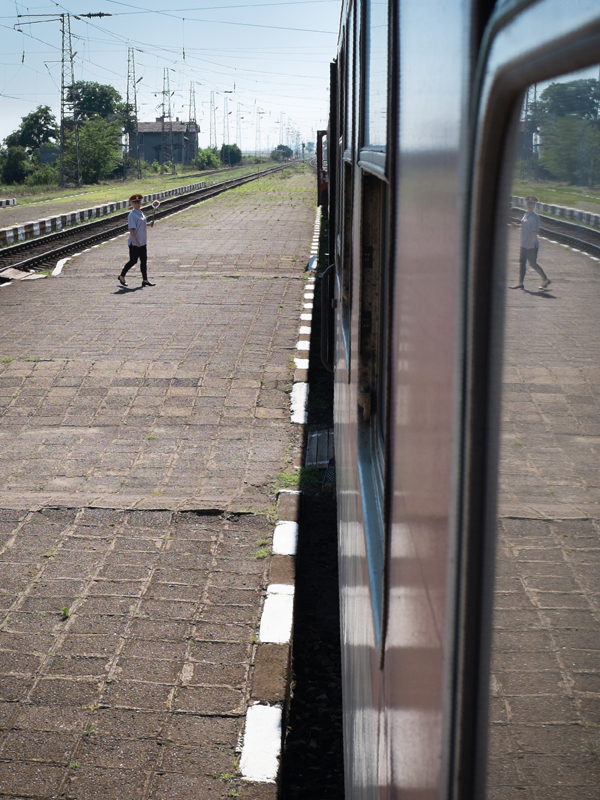 Bulgaria has 4,072 km of railroads with nine major lines across the country

Taking the train, you can cross the country from Burgas, Varna and Silistra to the east, to Ruse and Vidin in the north and northwest, and to Petrich in the south. With the train you can visit Plovdiv without the fear that some crazy driver in a flashy BMW will put your life at risk on the Trakiya Highway. While on the train, you have much more space than on the bus. Who needs WiFi, when you have to wait for hours squeezed into your seat before you get the opportunity to visit the loo?

Whatever your destination, you are obliged pass through Gorna Oryahovitsa, or to stop there to change trains. If you have not done this, you cannot claim any experience of Bulgaria train-travelling. It is the largest train station in northern Bulgaria and as the competition from the south diminishes, Gorna Oryahovitsa has become the epicentre of train travel in Bulgaria. Everyone has a special memory connected with it, and some still remember through nostalgic memories the huge pond in front of the station in existence for at least 40 years. 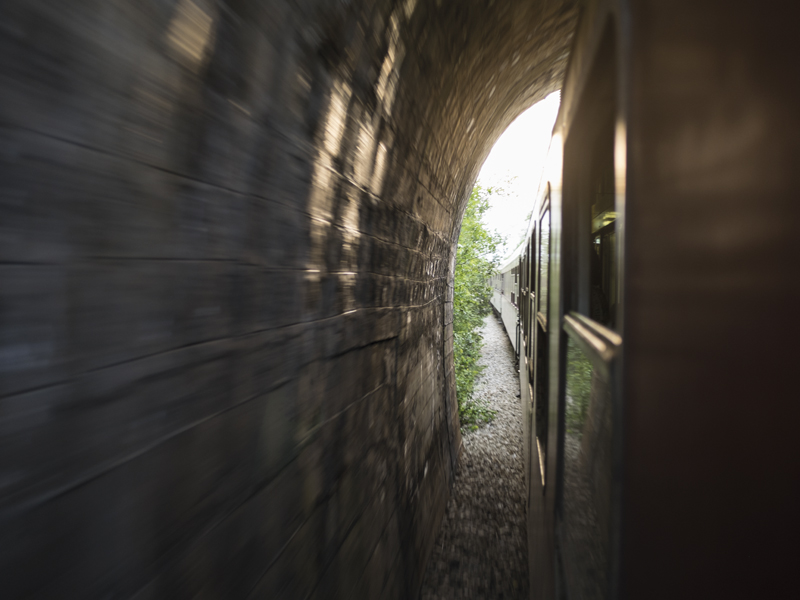 The 5,808-metre Koznitsa is the longest railway tunnel in Bulgaria. It passes through the eponymous ridge connecting the Stara Planina and the Sredna Gora mountains and is on the Sofia-Karlovo railway. The tunnel was built in 1949-1951 and is at an altitude of 798-818 m 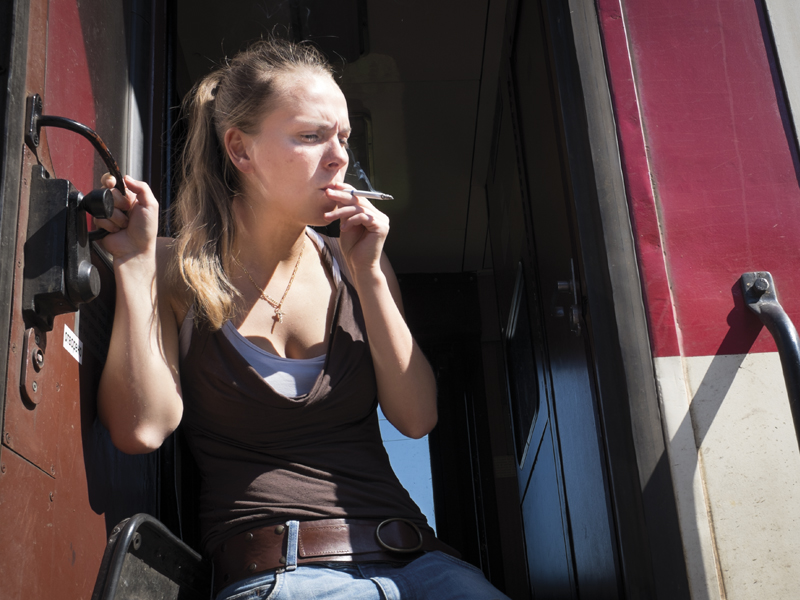 While travelling by train, the world on the other side of the window is yours to look at and, given the slow speed of trains in Bulgaria, which move at 60-80 kilometres an hour, you have plenty of time for gazing.

Some of the landscape you pass through is mesmerisingly uneventful, but provides a glimpse into the lives of ordinary Bulgarians. The trains pass by sleepy villages and small towns, with their rows of houses with green gardens or apartment blocks with their washing hanging out, their satellite dishes and parked 20-year-old Opels. Sometimes you pass so close that you can smell what's being cooked for lunch. 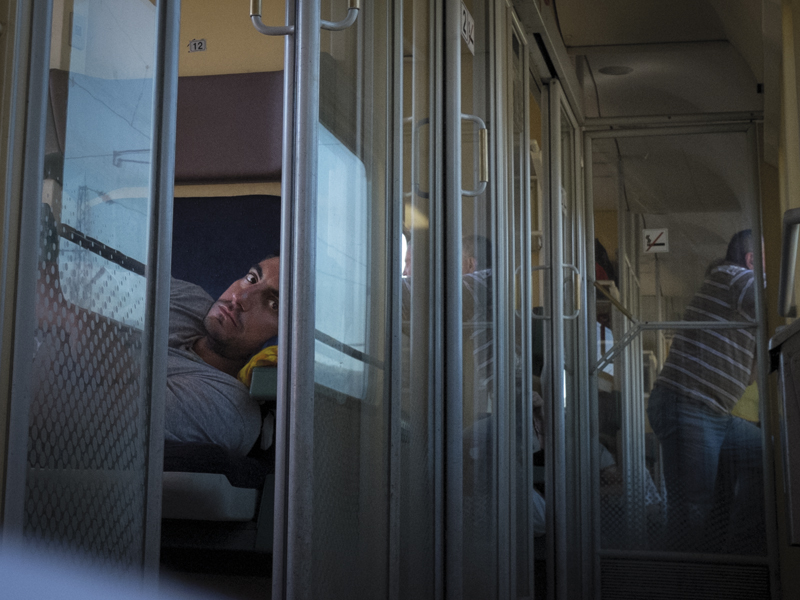 There are more spectacular things you can see from the window of a moving train, however, such as the curves and cliffs and river of the Iskar Gorge, one of Bulgaria's most picturesque. You can drive along it by car, but nothing can beat the vistas of the rocks at Cherepish or Lakatnik when they are seen from the train.

The list of sights best seen from the train include Rupite and Kozhuh Planina – the train to Petrich passes right through them. If you are prepared and know where to look, you can spot the Madara Horseman on the high cliffs above Provadia, while the train rattles on its way to Varna. The train to Podkova, Bulgaria's southernmost train station, will bring you to the doorstep of the country's most charming mosque, the Maidens' Mosque. It is small and dark, and was built in time immemorial (indeed, no-one remembers the date) entirely of whole wood beams without using a single nail.

If you are looking for Bulgaria's most interesting line, the answer has to be the narrow gauge line which covers the 125 km from Septemvri to Dobrinishte in five hours, chugging along at the reckless speed of 25 km/h. During the trip the train enters the Rhodope, passes through Velingrad (the spa capital of the Balkans, no less, as the city advertises itself) and when it leaves the mountains, it trundles along through the Valley of Razlog, with the peaks of the Pirin and Bansko seemingly within reach. This journey is even more enriching, as you will share the train with a mixed bag of people from the Rhodope villages where the train stops. For many of them, the line is the only means of transport available. 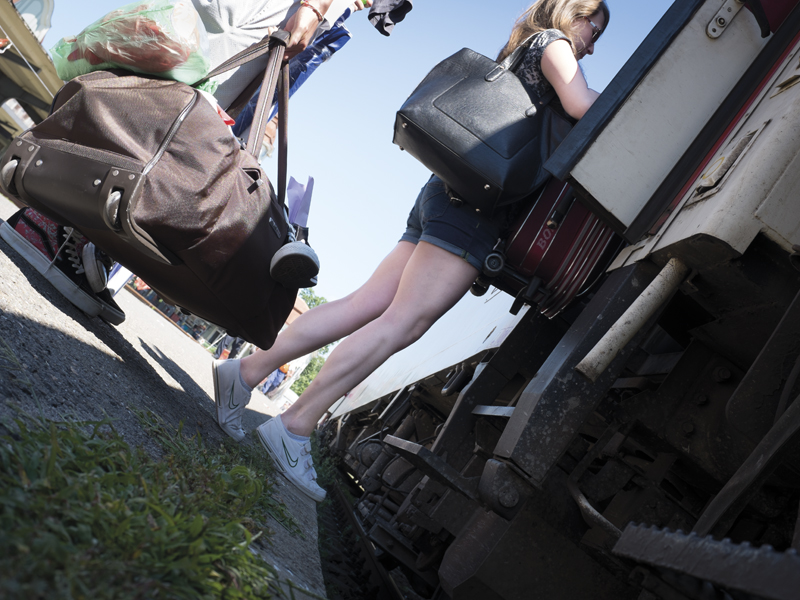 You will also see some unpleasant sights, and by that we don't mean the conductors who resolutely refuse to smile when they punch your ticket. The train will pass by destitute Gypsy neighbourhoods, where children amuse themselves by throwing stones at moving trains; by abandoned factories, fields, schools and villages. There is also a lot of derelict railway infrastructure, including railway stations. 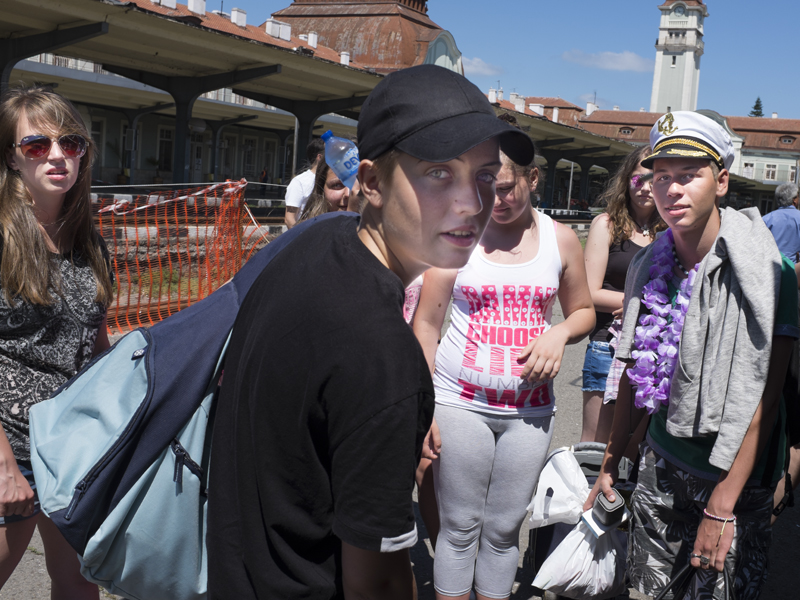 Taking the train will bring you to a range of Bulgarian characters...

Most of them were built between the two world wars, when the Bulgarian railway system, which had began its life with the British-built Ruse-Varna line in 1867, expanded. Plenty of money was invested in it, and King Boris III himself could drive a train. Bulgaria's railway system was further developed under Communism, when the sector was heavily subsidised. After the 1989 democratic changes, however, both state neglect and the National Railway Company's debts began to increase. Soon after the start of the world financial crisis, in 2008, the GERB government imposed heavy cuts on the company, closing whole lines and stations. Today, the company is trying to set things moving again – a difficult task especially if GERB return to power. 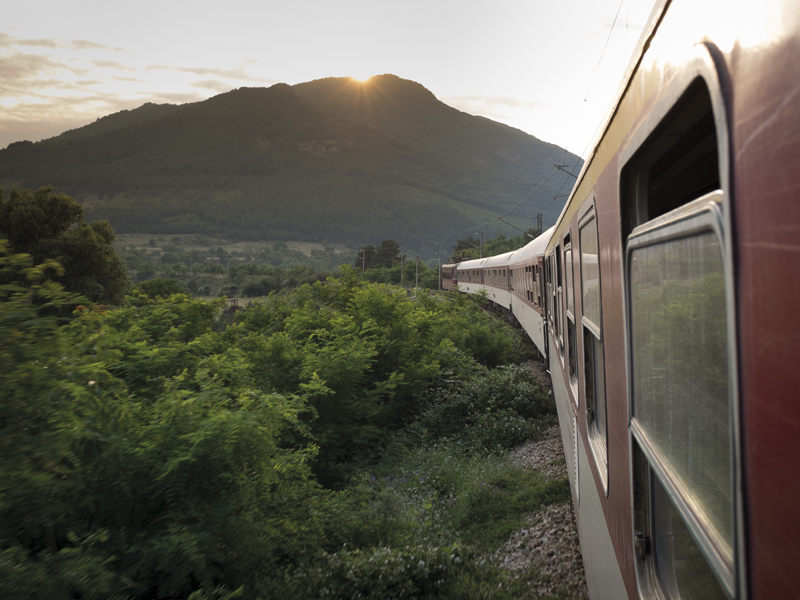 The best development in recent months is that someone is taking care again of the coaches and, while they are still old, they are at least clean. There is even toilet paper in the toilets.

The people who use Bulgaria's railway network are usually from the poorer classes, as the train is the cheapest means of transport. Probably most numerous are the pensioners, who spend their journey reading newspapers, moaning about how awful life is nowadays and quarrelling about politics. Usually, sympathies are divided between BSP, GERB, Volen Siderov and Nikolay Barekov. Gypsies, too, use the trains extensively, and so do students studying in far-off universities. This latter group can usually be seen playing cards with friends, or sitting quietly in the corner of the compartment, eyes fixed on the moving landscape, headphones plugged into ears, their whole attitude saying: "Can't wait until graduating to buy a proper car."

Poor kids, they really don't know what they are missing.