The people of Sofia love to point to a peculiarity of their city. Many of the most prominent sites and monuments in the Bulgarian capital are dedicated to or bear the names of Russians. The most obvious examples are the nation's principal cathedral, St Alexandr Nevskiy, and the horseback statue of Emperor Alexandr II in front of the parliament. The yellow-brick paved boulevard, which is one of the most prominent features of Sofia, is named after the same man, Tsar Osvoboditel, or King Liberator and, on its way to the Largo, it passes by the picturesque Russian Church.

There is more: the House of Moscow in Bulgaria, the Doctors' Garden and the names of streets and boulevards such as Dondukov, Skobelev, Alabin and Gurko.

The proliferation of Russian names in the Bulgarian capital is due to the role that Russia played in the re-establishment of Bulgarian independence from Ottoman rule in the war of 1877-1878, and the influence it had on the political and cultural life of the country afterwards. However, in the 135 years that have since passed, Russian and Bulgarian interests have often collided, peaking with the Soviet-backed Communist coup of 1944, when the USSR invaded and helped set up a hardline Communist state, in existence till 1989. A quarter of a century after Communism is no more, however, the nation is divided between opposing groups calling themselves Russophiles and Russophobes. Significantly, the general attitude among Bulgarians to pre-Soviet Russia and Russian culture is positive, which is reflected in the names of Sofia's streets.

The most spectacular monument with a Russian connection is St Alexandr Nevskiy cathedral, one of the largest Orthodox churches in the Balkans. The idea of creating a monument to the Russian soldiers who died in 1877-1878 appeared as soon as 1879 and was approved by the first Bulgarian Constitutional Assembly. After a donation campaign promoted by Emperor Alexandr II himself, the Bulgarians collected 1,900,000 leva. The foundation stone for the church at the then highest point in Sofia was laid in 1882, but most of the project by the Russian architect Alexandr Pomerantsev was only completed between 1904 and 1912. Its patron saint, however, created some controversy in Bulgarian society. St Alexandr Nevskiy was chosen because he was the protector of Emperor Alexandr II, but the Russian bombing of Varna in 1915 created a public outcry that resulted in the rededication of the church to the Bulgarian saints, Ss Cyril and Methodius. In 1920, the original saint was brought back to the cathedral. Few Bulgarians, however, know anything at all about this 13th Century purely Russian prince and warrior, possibly because there is no connection between him and Bulgaria at all.

Russian soldiers who died in the 1877-1878 war have several other monuments in the city. A small, sturdy obelisk known as Doktorski Pametnik, or Doctors' Monument, is dedicated to the 529 physicians, orderlies and nurses who lost their lives on the battlefront. It was unveiled in 1883 and gave its name to the garden surrounding it, between Shipka and Oborishte streets.

The least known monument to the Russian soldiers of 1877-1878 is a small stone pillar topped with the two-headed eagle of Imperial Russia on Tsarigradsko Shose Boulevard, in front of the Bulgarian Telegraph Agency. Unveiled in 1885, it is dedicated to the dead of the 3rd Infantry Division of the Russian army. This monument was destroyed in the Allied bombing of Sofia in January 1944, and was restored several times after the end of the war, with the most significant intervention in 1987, when the imperial eagle was replaced with an ordinary one. The original design was recreated in 2009.

While these monuments are now almost invisible in the busy life of the capital, the Russian Military Cemetery, in Plot 91 of Sofia's Central Cemetery, is a humbling experience. Containing the graves of soldiers from the 1877-1878 war and a central monument in traditional Russian style, it looks like a piece of rural Russia transported to Bulgarian soil. 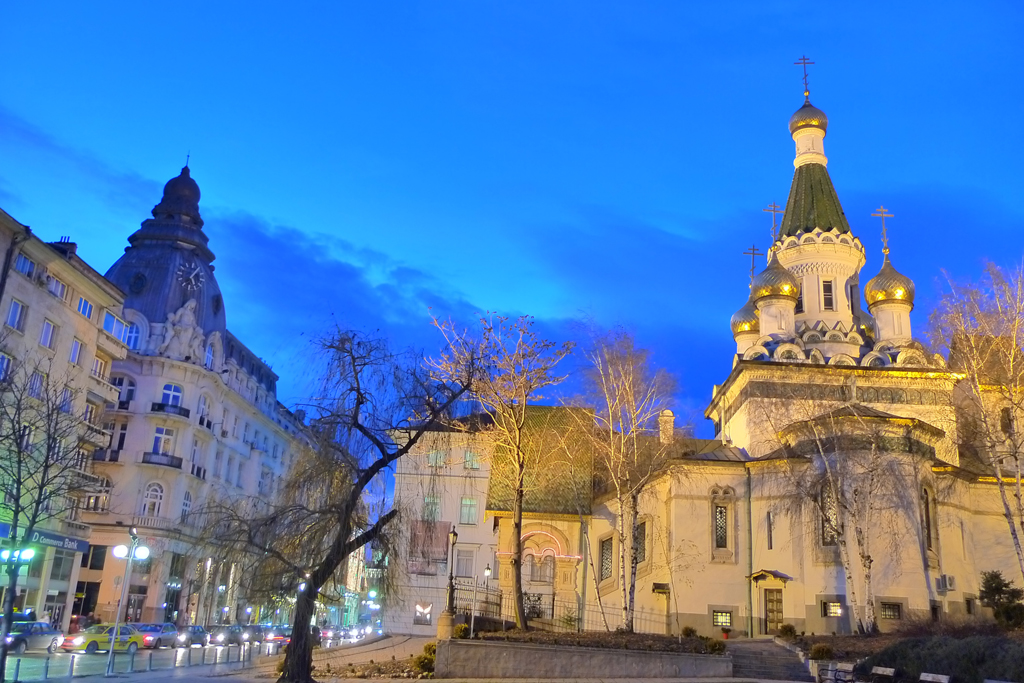 Alexandr II, who fought the 1877-1878 war, is understandably honoured with a significant number of sites in Sofia. The first monument built in newly-independent Bulgaria, in 1882, was dedicated to him. It is an obelisk, funded by Russian donations, that used to stand outside the then limits of the city, on the road taken by the Ottoman general during his escape from the advancing Russian troops. Today it is known simply as Ruski Pametnik, or the Russian Monument, located on one of Sofia's busiest roundabouts. Two of the boulevards that lead to it are named after Russian generals of the war: Mikhail Skobelev and Eduard Totleben. Nearby is Sofia's main emergency hospital, named after Nikolay Pirogov, a prominent military surgeon who organised the care of the wounded in 1877-1878.

In 1889, the city council of Sofia renamed the central Istanbul Caddesi, or Istanbul Boulevard, Tsar Osvoboditel, after Alexandr II. The idea for a monument to the emperor in front of the newly-built Bulgarian Parliament was put forward in 1892. The Bulgarian Prince Ferdinand himself made the first donation to the project. An Italian sculptor, Arnoldo Zocchi, won the commission and his creation of bronze and granite was unveiled in 1907.
Emperor Alexandr II is also the partial namesake of Aleksandrovska Hospital, Sofia's oldest hospital. Founded in 1884, it was named after him and another Alexandr, the first ruler of newly-independent Bulgaria, Prince Alexander of Battenberg. The hospital is still functioning.

The names of Russian generals and politicians who fought in the 1877-1878 war or played an important role in the first years of Bulgaria's independence are also commemorated in the names of central streets. Besides the above mentioned Skobelev and Totleben, there is Prince Alexandr Dondukov-Korsakov, who was the representative of the so-called Provisional Russian Government in newly-independent Bulgaria, in 1878-1879. General Iosif Gurko merited a street named after him for his significant input into the war, and General Pyotr Parensov for the fact that he was the first defence minister of Bulgaria. Ivan Aksakov and Prince Pyotr Alabin, who also have streets in the centre of Sofia, represent more peaceful aspects of the war. Aksakov was a scientist who campaigned for the Bulgarian cause, and Prince Pyotr Alabin was Sofia's first governor.

The Russian presence in Sofia exceeds the deeds and the immediate aftermath of 1877-1878. A Russian embassy was established in the country in 1888 and its first home, which served the USSR until the 1970s, is at the intersection of Oborishte and Rakovski Streets, the latter ironically named after a leader of the national independence movement who was wary of the Russians. Today, it is the site of the House of Moscow in Bulgaria cultural and business organisation.

Colourful and gilt-domed, looking like a toy, the nearby church of St Nicholas the Miracle Worker is known to Bulgarians simply as the Russian Church. Originally serving as the chapel of the Russian Embassy, it was built in 1914, but this changed with the Russian Revolution of 1917. During and after the Russian Civil war the church became the focal point of the significant community of Russian exiles. It remained so until 1947, when Communist Bulgaria gave the property to the USSR. Today St Nicholas belongs to the official Russian Orthodox Church, and is known not only for its prominent architecture, but also for a supposedly miracle-working man buried in its crypt. He is Bishop Serafim Sobolev, the leader of the Russian Orthodox community in Bulgaria from 1920 to 1950. According to believers, anyone who prays at his grave and writes their wish on a piece of paper will have their desires come true. In 2016, the Russian Orthodox Church canonised Bishop Sobolev.

The garden between the Russian Church and the former Russian Embassy is adorned by a more secular monument: the statue of poet Alexandr Pushkin. Placed there in 2001, it does not commemorate an actual connection between Pushkin and Bulgaria, only the public's reverence of his talent.

Streets named after Russian men of letters and prominent historical figures are scattered all over Sofia. General Mikhail Kutuzov, a hero from the Napoleonic wars, is commemorated together with the 17th Century national hero Ivan Susanin. The list also includes writers Nikolay Gogol, Alexandr Pushkin, Fyodor Dostoyevski and Anton Chekhov. A whole neighbourhood is named after Leo Tolstoy, although during Communism the area bore the name of another Tolstoy, Alexey, who was a Communist writer with no relation to Leo. When Communism collapsed many streets bearing names of Soviet functionaries were promptly rechristened. Life for the city council was made easy by this particular coincidence as they only had to change Alexey Tolstoy first name. 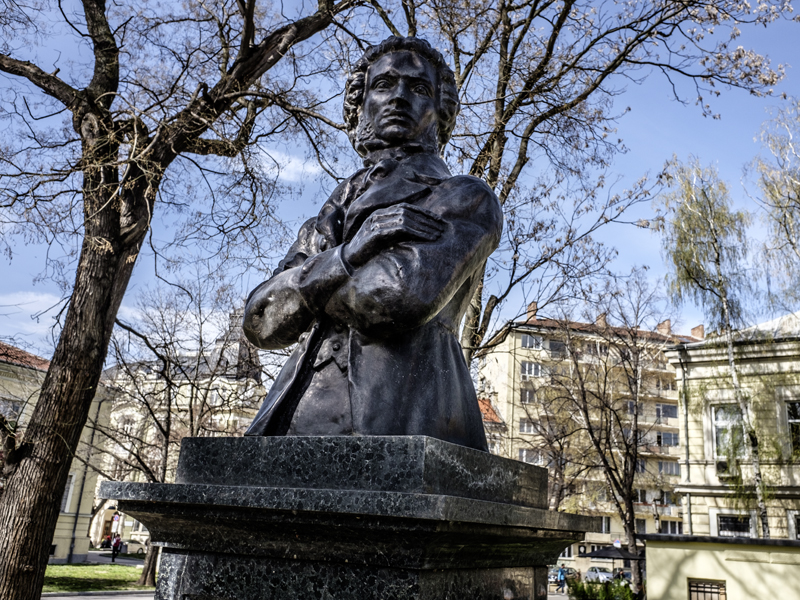 The Doctors' Monument is in the centre of one of Sofia's finest gardens, and toniest neighbourhoods 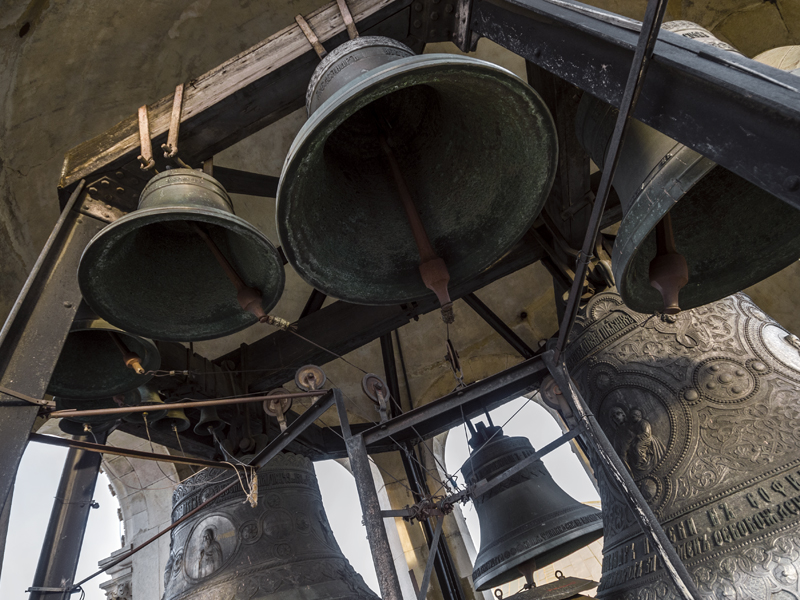 The King Liberator monument has long become an integral part of Sofia's life. Sofianites use it during protests, and meet friends "at the horsetail," meaning behind the statue 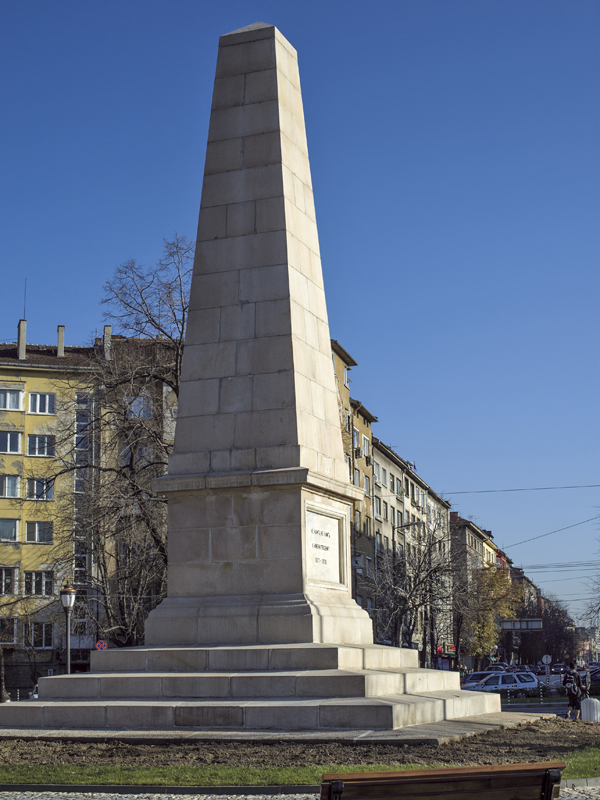 Few of the Sofianites passing daily through the roundabout at Ruski Pametnik, or Russian Monument, are aware that it is dedicated to King Alexandr II

Discover Bulgaria's fascinating sites off the beaten track, with the luxurious, inspiring and informative HIDDEN TREASURES OF BULGARIA 2.