WHO WAS KRALI MARKO?

According to a legend, Krali Marko is responsible for the peculiar shape of that rock on the Chernelka River canyon: he cut it in two with his Damascus sword during a fight with his archenemy

Folk memory moves in mysterious ways. One of the best examples is Krali Marko, the legendary hero venerated for centuries throughout the Balkans as the mighty man who protected lands and people from the Ottoman invasion. For centuries, legends and epic songs were told and sung; they spread, transformed and became more and more elaborate, telling the story of the larger-than-life Krali Marko. The owner of a wondrous spotted horse, he encountered fairies, braved invaders and traitors, participated in heroic competitions, and freed thousands of enslaved men and women. It is hardly a surprise, then, that a number of locations in modern Bulgaria, Serbia and Macedonia bear his name.

Behind the mythical Krali Marko hides a real-life prototype, but in a twist of irony and chance the historical Prince Marko has little to do with his epic doppelgänger.

Prince Marko (1335-1395) had the misfortune to be a relatively insignificant feudal royal in the 14th century Balkans. At the time, the region was exhausted after a series of plagues, failed crops, religious zealotry and petty feuds that were tearing apart the once strong, but now waning, Bulgaria, Serbia and the Byzantine Empire. What was once a small number of local powers was now a mosaic of large and small kingdoms and principalities, plus a bunch of rogue aristocrats eager to seize their moment.

There was an ongoing Ottoman invasion and, because of the highly organised Ottoman army, it was steadily taking over the region. In this situation, in 1371, both the Serbian kings Vukašin and Uroš died. Suddenly, Prince Marko, who ruled over a part of what is now the Republic of  Macedonia with a seat at the town of Prilep, found himself the heir to the Serbian throne. He never became the actual king. Instead, he became a vassal of the Ottomans and remained loyal until he died, fighting for the sultan against fellow Christians, in the Battle of Rovine.

How exactly a loyal Ottoman vassal became the mythical embodiment of Christian opposition to the Ottoman invasion is a question whose answer is forever lost. It was probably pure chance. The mechanisms that contributed to this transformation, however, can be clearly outlined. They include the mass frustration of the Balkan population that followed the Ottoman invasion, their need for a hero to entrust with their hopes for independence, and the rise of nationalism in the 18th-19th centuries when modern artists and story-tellers singled out Krali Marko from the folk legends and epics, and made him a part of modern plays, paintings, and literature.

Typically for the region, Bulgarians, Macedonians and Serbians all claim Krali Marko as one of their kin. Most historical traces of the true Krali Marko, however, are in what is now the modern Republic of Macedonia. A monastery south of Skopje, appropriately called Marko's Monastery, has preserved the portrait of the real man. Dark, slim and troubled, the aristocrat painted on the church wall looks like the last man on earth to become the prototype of a mighty hero, the saviour of the enslaved and the protector of Christendom.

Prilep, which was the seat of Prince Marko, is now a sleepy backwater town, but the rocks above it are still crowned with the remains of his fortress. It is, of course, known as Markovi Kuli, or Marko's Towers. On a nearby hill rises the beautiful mediaeval Treskavec Monastery. While it lacks direct evidence of Prince Marko's presence, it was rebuilt in the 14th century and so it is highly probable that he visited the place. 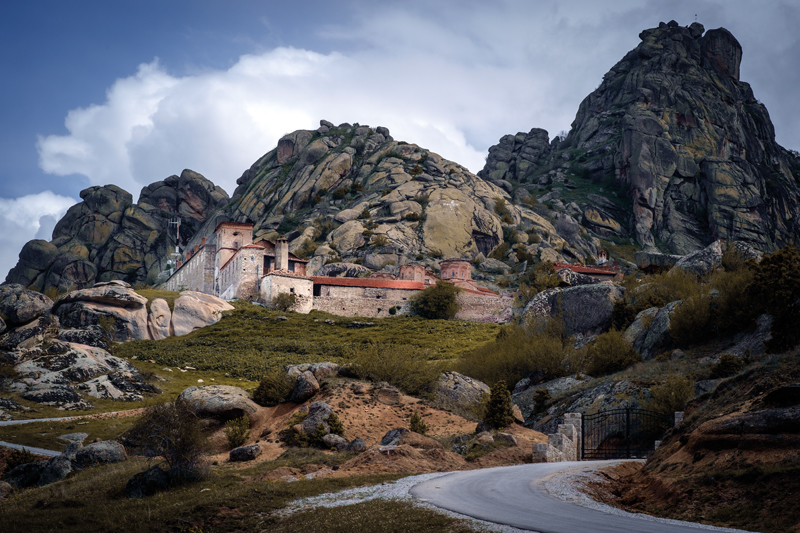 Treskavec Monastery, near Prilep in Macedonia, the residence of the real-life Krali Marko was probably visited by this rather mediocre aristocrat who in a whim of history is remembered as an all-Balkan hero

Both the fortress and the monastery are located over an ancient rock shrine, the remains of a pagan cult widespread in the prehistoric Balkans that survived well into the 6th-7th centuries AD. The link is clearly thought provoking: historians believe that the mythical Krali Marko is actually yet another manifestation of the prehistoric Balkan hero, who rode a horse and was venerated in rock sanctuaries. The veneration of such characters and the stories about them is yet another explanation why in the mediaeval times the Balkan peoples embraced the stories of Krali Marko: They had the blueprints, and they just filled them with new, actual details.

The stories told in Bulgaria about Krali Marko's origins also illustrate the amalgamation of a pagan tradition and mediaeval history. According to them, Marko was the son of Momchil Voyvoda (an actual historical figure, a maverick aristocrat who first opposed the Ottoman invasion in the Rhodope). While Marko was still in the crib, the king learned that the baby would one day dethrone him, and ordered him to be killed. Marko's parents abandoned him in the forest, where he was found by a nymph (a representation of the ancient Thracian Great Goddess). She suckled him, and thus gave him his supernatural powers.

Bulgaria abounds with the remains of ancient Thracian rock shrines, which later generations attributed to Krali Marko. As evidence of Marko's presence, tradition points to the strange, large cavities in some flat rocks. These are the imprints of Marko and his horse, legends say, while according to historians they are remains of ancient ritual basins and rock tombs. It is hard to count the number of places called Markova Stapka, or Marko's Step, Markov Kamak, or Marko's Rock, or something of the kind, that used to be ancient shrines. To name but a few, the list includes the megalithic shrine under Tsarev Vrah peak in the Rila, Markova Stapka near Pernik, or the White Rock near Marulevo village near Blagoevgrad. 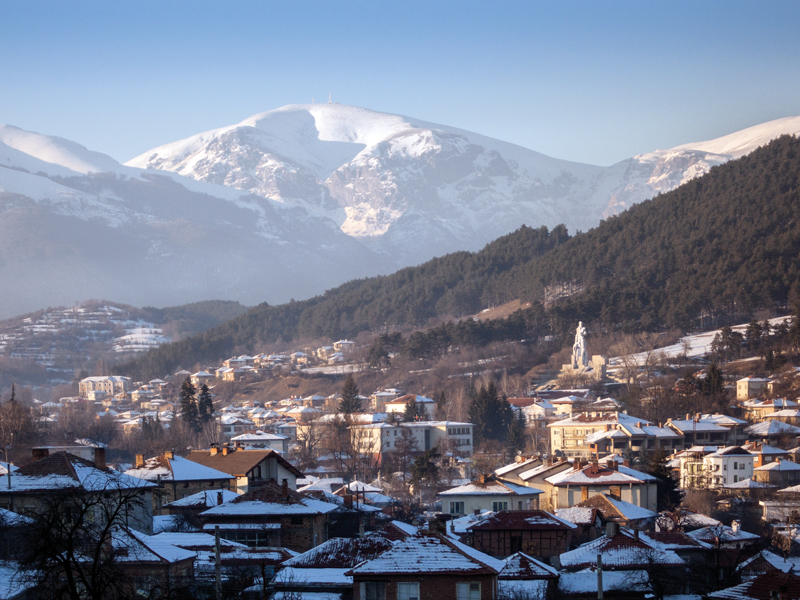 Another legend says that Krali Marko's throne was near modern Botev Peak, in the Stara Planina

Many of the places associated in legends with Krali Marko tell stories of vicious battles with his archenemy, Musa Kesedzhiya, a mythical antagonist representing the Ottoman invaders. One of the most spectacular of these places is the rocky canyon of the Chernelka River, by Gortalovo village near Pleven. According to the legend, Krali Marko and Musa fought there for three days and three nights. Krali Marko lunged with his Damascus sword (Damascus steel was the best at that time and obviously people did not see any contradiction in a Christian hero using such a weapon against Muslim invaders) at Musa, but missed and split a giant rock in two. The rock is still there, part of the eco trail through the canyon.

Another legend tells that Krali Marko resided at the top of the Stara Planina's highest peak, the modern Botev Peak. His throne, his wheat field and his threshing floor were all around, and can still be seen, turned to stone.

While Krali Marko is an undisputed hero, some legends present him as a somewhat vain character. Take, for example, the story about Marko and his sister, who was equally big and strong as him. One day, they decided to see who could throw a stone so high that it would fly over the Maragidik Peak in the Stara Planina. They threw their stones, and then Marko mounted his horse and went to check who had won. It was his sister. The hero became so mad with anger that both his footsteps and hooves of his horse were imprinted on the flat rock.

Another story showing Marko to be a bad loser is told about the two Roman pillars near Pavlikeni. They originally belonged to the mausoleum of a local Roman, but over time both the Roman and the mausoleum were forgotten and a legend emerged, about Krali Marko and a rival competing for the love of a local girl. The girl promised to marry the one who built the higher stone pillar. Marko, of course, won, but she chose his rival anyway, as she was in love with him. Enraged, Marko smashed the rival's column. The place is still called Markov Kamak by the locals.

Of course, there is a group of more crude stories. One of them is about one of Sofia's neighbourhoods, Poduene. The word play makes it next to impossible to properly relate the story in English, but the essence is this: One day, Marko, being big and strong, stood with one leg on Mount Vitosha and the other on the Stara Planina mountains. He started looking for a place to camp. Eventually, he chose the place that was right under his crotch. This was how Poduene appeared. Its name means Under My D*ck. 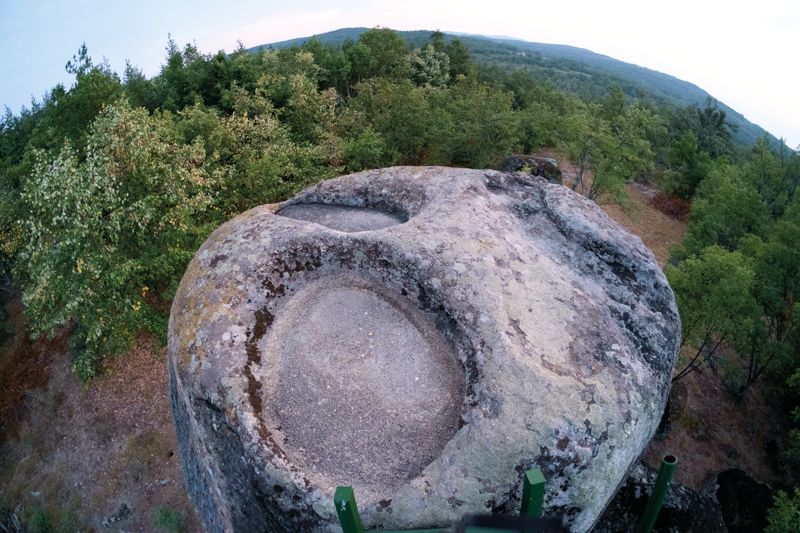 Markov Kamak, or Marko's Rock, is an ancient Thracian shrine near Dolno Yabalkovo village, in the Strandzha, near the border with Turkey. The legend says that while on his way to Constantinople the mighty hero took a pebble and threw it behind his back. What was a pebble for him, however, for ordinary people is a boulder 8m high. The ritual basin carved on its top by the Thracians was later interpreted as the imprint of Marko's enormous foot