THE SILENCE OF BULGARIA'S ABANDONED AIRPORTS

The former Silistra airport is now out of limits

Being a flight attendant was a glamorous job during Communism. Uniformed beauties on calendars for Balkan Airlines, the state air carrier, reinforced that the job as an aspirational one, while for the more practically minded, the profession had another advantage. When local shops lacked essentials like toilet paper, working on an international fight meant having the opportunity to buy foreign luxuries (whisky, perfume, fur coats and Levi's jeans) and sell them for a good profit on the eager Bulgarian black market.

Back in the day, Balkan Airlines also had domestic flights, considerably shortening the time needed to reach places like Vidin, in the northwest, or Silistra, in the northeast. Tickets were relatively affordable.

Today, however, the local network of domestic airports has shrunk to those in Sofia, Plovdiv, Burgas and Varna, plus the one in Gorna Oryahovitsa, that barely has any flights. The rest are deserted, slowly falling into ruin, with plans for renovation or repurposing appearing and disappearing with little visible effect.

The first civil airports in Bulgaria – the international ones in Sofia, Burgas, Varna, Plovdiv and Gorna Oryahovitsa – were established before 1944, but the Communists invested heavily in developing this method of transportation. The first regular flight between Sofia and Burgas took place in 1947, sanctioned by dictator Georgi Dimitrov himself, and the following year TABSO, a Bulgarian-Soviet joint airline, was established. Its first flight was in 1949, on the regular route Sofia-Plovdiv-Burgas-Varna. Five years after TABSO's establishment, Bulgaria bought out the Soviet shares in the company.

In the following decades, the network of civil airports in the country expanded, together with a number of airfields used by the military or agricultural sector. In 1965 regular flights from Sofia to Burgas, Varna, Ruse, Gorna Oryahovitsa, Targovishte and Vidin were established, and three years later, TABSO was renamed Balkan Airlines. Due to bad management, the company became infamous for its safety record; between 1952 and 1988, 15 domestic and international flights crashed, claiming 547 lives.

In the early 1990s, the painful transition from Communism to democracy hit Balkan and Bulgarian aviation hard. The state no longer had the resources to subsidise the loss-making company and Bulgarians did not have the money to buy tickets. By the end of the 1990s, many of the regional airports had closed. In 1999 the heavily indebted Balkan Airlines was sold to a private investor. Instead of developing the business, he sold the assets, and duly declared bankruptcy soon afterwards.

The airports at Sofia, Varna, Burgas and Plovdiv managed to survive, mainly due to international flights. The fate of the rest of Bulgaria's airports was not so happy. The Gorna Oryahovitsa airport never ceased working and in the 1990s was even granted an international status, but most of the time it is silent

Opened in 1925 as a military airfield, the "international" airport at Gorna Oryahovitsa, near Veliko Tarnovo, is still operational, although it serves mainly cargo and charter flights. In the 1970s and the 1980s, it was a regional transportation hub and even in the 1990s it tried to keep its head above water. A new air traffic management building was constructed in 1995, and the following year it received international status, and investments in infrastructure were made. For years, there have been regular rumours that someone will take on the airport as a concession. So far, it remains quiet most of the time, an eerie sight made even stranger by the old-fashioned wooden panelling on its walls and its signs preserving the aesthetics of the 1980s.

Compared with other airports in Bulgaria, however, the one at Gorna Oryahovitsa is lucky.

In its heyday, Targovishte airport was one of the busiest in Bulgaria. It was closed indefinitely in 1998, due to safety issues. Ten years later, it was sold and now belongs to a local entrepreneur, who uses its runway to dry herbs on.
Silistra airport was opened in 1970 but now is, too, a strictly guarded private property. In 2011, then Prime Minister Boyko Borisov used it during a visit to the region; he publicly declared its privatisation "a crime" and promised an investigation. Of course, nothing happened. Established in 1973, the civil airport in Vidin, the main city in what is now Bulgaria's and the EU's least developed region, had flights to Sofia and, in the summer, to Varna and Burgas. According to some estimates, about 40,000 passengers used it every year. Civil flights continued until 1991, and the airport closed completely in 1999. Again, there are regular reports that someone will take it on as a concession, but so far nothing has happened. The runway is empty, and sometimes used for car races. 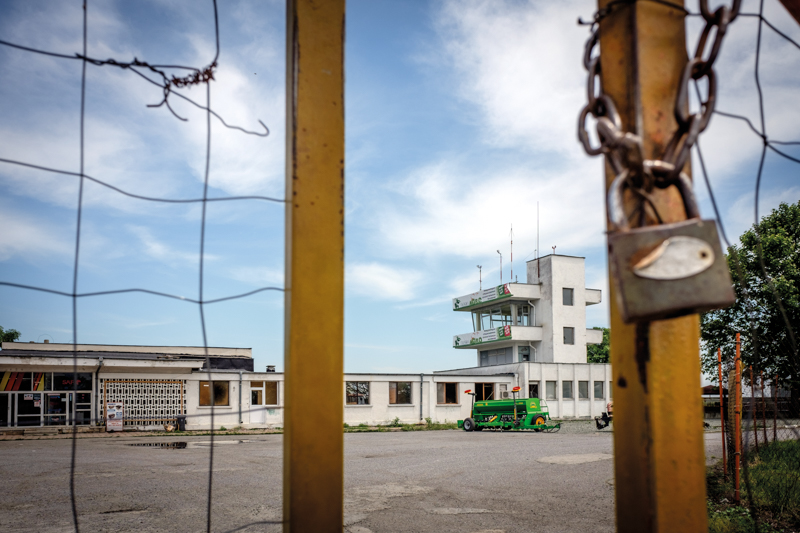 There are some ambitious plans for the development of the Stara Zagora airport, but they are yet to materialise

Stara Zagora civil airport is one of the oldest in Bulgaria. It was opened in 1954, and twenty years later welcomed international cargo flights. Today it is used as a site for agricultural exhibitions. This airport is still state property, and recently there were plans to turn it into an industrial area or into "Europe's second largest logistical hub" for cargo flights to and from Asia.

The most curious story belongs to Ruse Airport. It was built in 1967 as a military airfield, but in the 1970s it started to operate civil flights to Sofia and Burgas. These stopped in 1991, and the airport was closed in 2000.

Before that, however, the location has already gained notoriety. In the summer of 1995, a group of psychics from Ruse claimed that they had been contacted by an alien race from a planet called Krisi. The extraterrestrials, led by their president, were eager to come and save Bulgaria and would arrive, the psychics claimed, at Ruse Airport.

On the scheduled date, 11 September 1995, thousands of Bulgarians gathered at the airport, with many more watching on TV. Hours passed, and the crowd grew restless, but the spacecraft did not materialise. It was all the Bulgarians' fault, the psychics claimed, before being rescued from the angry crowd. The aliens were disappointed that the Bulgarian president was not there to meet them.

Today, Ruse airport is owned by the city's municipality and, after a renovation in 2016, it is again open for small airplanes.