The Fraternal Mound in Sofia. Inaugurated in 1956 the monument was dedicated to dead antifascists. It is also the tomb of 17 Communists from Sofia. Its architecture was representative of the period: a 41-metre obelisk with the figures of a male and female Partizani at its base, and realities of scenes from the Partizani movement

When you travel around Bulgaria, from the capital to the smallest of villages, you will inevitably encounter monuments of stern men and sometimes women, with guns in their hands and passion in their eyes. Made of stone or bronze, these monuments adorn squares and streets, peek over the trees by roads, and form whole, often overgrown compounds.

Some of these monuments are maintained, others have been abandoned and crumbling. Some are in the realistic style known as Stalinist Baroque, popular across the East bloc in the 1940s and the 1950s. Others bear the hallmarks of the peculiar combination of modernism, cubism and sheer extravagance, typical for Bulgarian sculpture in the 1970s and the 1980s.

All are dedicated to the Partizani, the members of the clandestine Communist movement in Bulgaria in 1941-1944.

The first resistance groups appeared in Bulgaria a few days after 22 June 1941 when Nazi Germany attacked its former ally, the Soviet Union. During the following years Communists as well as anarchists joined the clandestine movement. A network of armed units aided by helpers operated territorially. The main aim of the Partizani was to disrupt infrastructure and communications, though in popular culture those actions came to be perceived mainly as raids on dairy farms. The Wehrmacht as well as important military and political figures were also targeted.

It should be noted that with the exception of Yugoslavia, the Bulgarian Partizani had nothing to do with resistance group elsewhere in Europe, even though some of those, like in Italy, were also called Partigiani. Similarly to the Kingdom of Italy, in the Kingdom of Bulgaria, also Nazi ally, there was little or no legal opposition. However, while the Italian Partigiani or the French La Resistance or the Greek Еthniki Andistasis were usually umbrella organisations of various anti-Nazi armed and unarmed groups, in Bulgaria the Partizani were mainly Marxist and received their instructions and support only from Moscow.

In the beginning the Partizani movement was weak and sparse, but in 1943 the Soviet Union ordered it to streamline itself into a well-functioning structure called NOVA, or Revolutionary People's Liberation Army. In 1943-1944 the government stepped up its attempts to annihilate the movement and set up a special police force, the Gendarmerie, to fight the Communists. Both sides committed numerous atrocities. The Partizani conducted assassinations, including in Sofia. The Gendarmerie set fire to the houses of Partizani families and their helpers. Captured Partizani were tortured and then shot. The interior minister announced a bounty of 50,000 leva for the head of any dead Partizanin. Voluntary "hunting parties" started getting formed in villages and towns to chase Partizani.

On 5 September 1944, the USSR declared war on Bulgaria. The Red Army invaded on 8 September. On 9 September 1944 the Partizani descended into the towns and villages and joined the coup d'etat, organised by the OF, Fatherland Front, a broad coalition sponsored by the USSR.

Shorty thereafter the former Partizani installed themselves in key state, military and civil service positions. They formed the pith of the Communist establishment. Todor Zhivkov and many of his associates had all been members of the Chavdar Partizani unit. In the course of time, the Partizani and their helpers, and their children would be granted the status of Active Fighters Against Capitalism and Fascism, which entailed many privileges. In reality, they became the regime's elite. 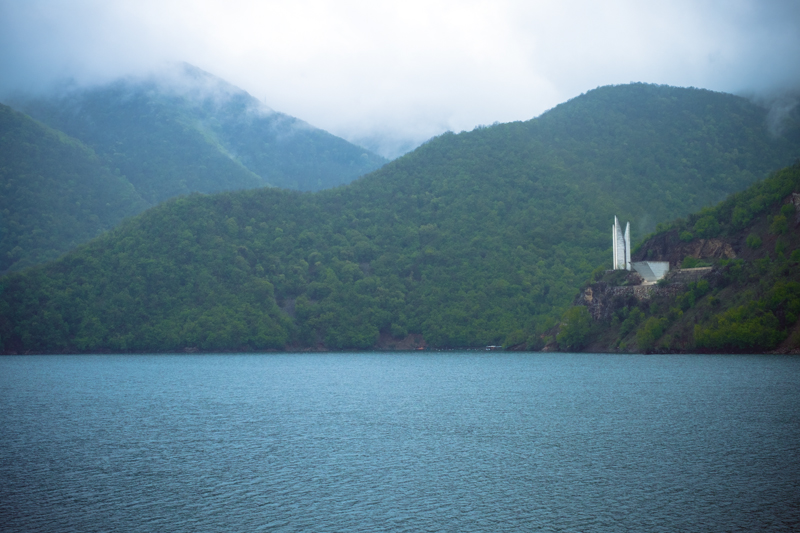 A monument to the Anton Ivanov Partizani unit at Vacha Reservoir in the Rhodope. The first Partizani started operating in the region in September 1941, but until 1943 they were few and scattered. On 14 February 1943 the separate detachments consolidated themselves in a unit called Anton Ivanov. During the following months the number of Partizani increased to about 200, according to some sources. At the beginning of1944 the government forces managed to defeat the Partizani. Vacha Reservoir was constructed in 1960 and up to 1999 it was called Members of the Anton Ivanov Unit Dam

How many were the original Partizani is a question whose answer depends on whoever does the talking. In May 1944 Georgi Dimitrov inquired how many Partizani there were in the country. The number then was 2,320. According to German and British intelligence, there were 5,000-18,000 Partizani operating in Bulgaria in 1943-1944. According to the BKP in 1945, there were 7,000 Partizani as of 9 September 1944.

Communist Bulgaria introduced the special honorary title of Fighter Against Capitalism and Fascism (BPFK) and the more meritorious Active Fighter Against Capitalism and Fascism (ABPFK). The holders of both and their families enjoyed significant privileges in daily life, including free holidays, free medicines, high pensions, exceptional access to university education and many others. By 1980, the people claiming ABPFK privileges were 200,000.

Monuments of Partizani who died in combat with government forces or in the course of an action started appearing soon after 9 September 1944. As a rule, they were placed in the locations of important battles or events related to the movement such as the village of Balvan near Veliko Tarnovo, the village of Batuliya near Sofia and Balova Shuma locality near Montana.

These monuments usually represented a concrete historical personality, a symbolic Partizanin or a group of Partizani that as a rule were larger-than-life and stood in a position signifying resolution, power, fortitude and/or tragic heroism.

A special kind of monument was the so-called fraternal mound, dedicated to a group of Partizani, often serving as their collective tomb. Examples were the Fraternal Mound in Freedom Park (now Boris Garden) in Sofia and the Fraternal Mound at Litakovo, a village near Botevgrad.

Most Partizani monuments, however, were not grand-scale projects bearing prestige, but modest busts, reliefs and plaques placed on their homes or in the centre of the places where they lived.

The Partizani monuments were more than just mementoes. Through the Communist era they had an active role to play in society. School kids were taken to them for trips and celebrations. Thousands of Bulgarian children were accepted as Pioneri and members of the Komsomol at their local Partizani monuments.

A monument to the dead in the antifascist struggle, the Barricades area near Koprivshtitsa. The Georgi Benkovski Partizani unit spent their winters here. During Communism, a chalet was built next to the monument. Now the road leading to it disintegrates, and so does the chalet

After 1989 most Partizani monuments were quickly forgotten. Many statues ended up being covered in graffiti, the tiled walkways became overgrown, the bronze figures were either vandalised or stolen to sell as scrap metal. Some of these monuments are still maintained, however. Supporters of Bulgaria's Communist past sometimes mark 9 September around them.

Possibly in the years to come historians will agree that the Partizani movement in Bulgaria was more or less a form of civil war. Meanwhile, their monuments remain throughout the country. 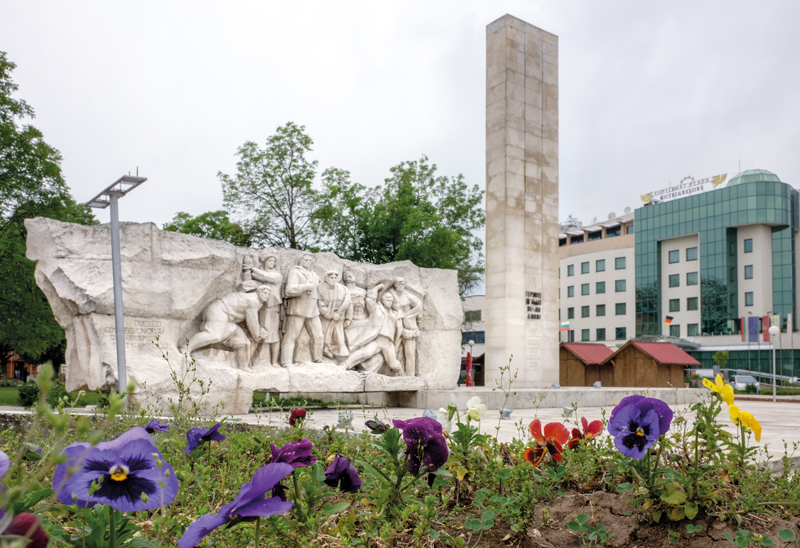 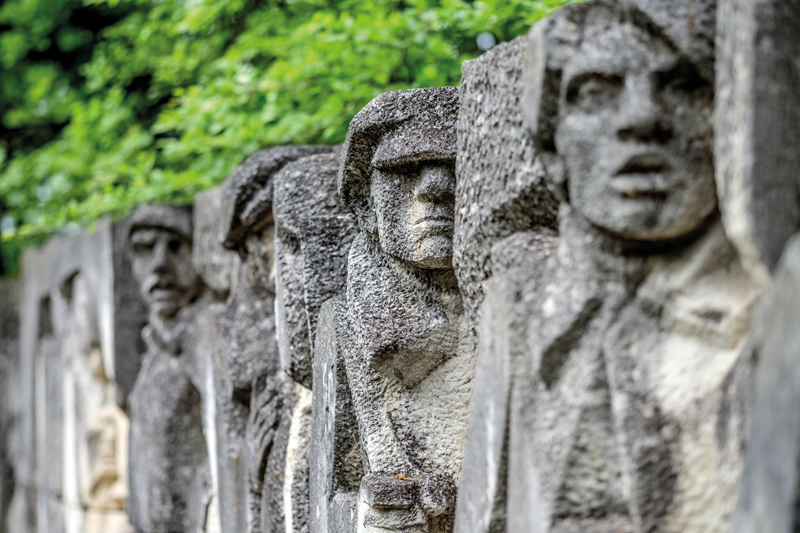 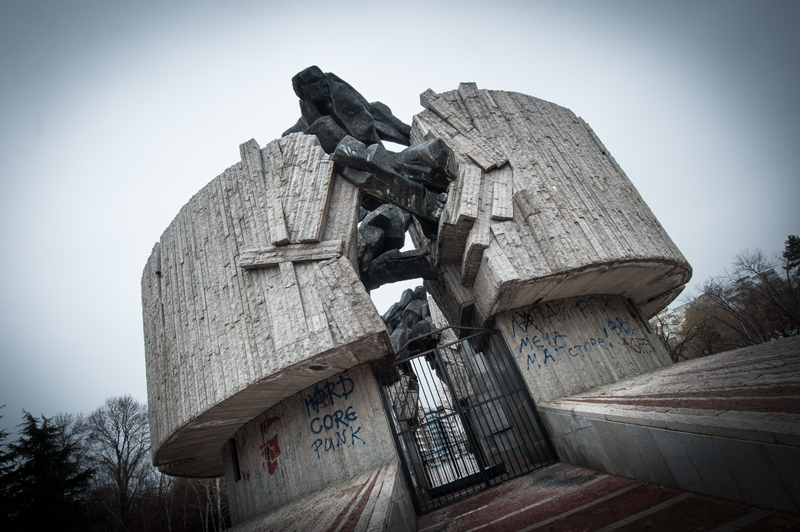 The pantheon of dead antifascists in the Second World War was built in the Burgas Maritime Garden, in 1981. Its author was Valentin Starchev, one of the most active sculptors during Mature Socialism

A memorial to the Anton Ivanov Partizani unit in Krichim

Read 7919 times Last modified on Tuesday, 06 March 2018 14:57
Published in High Beam
More in this category: « FROM UTOPIA TO DYSTOPIA BEGLIKTASH, A MEGALITH IN WINTER »