Bulgaria has a number of forts, both genuine ones as in Cherven and recently constructed "restorations" as in Veliko Tarnovo. The country, however, has several examples of a curious type of fortification: the standalone tower.

These were mostly built either in the Middle Ages or during the Ottoman period as fortified residences for local lords who had more than one reason to fear for the safety of their families and their wealth: robbers, bandit raids, the occasional rebellion or a villager with a grudge. With their towering silhouettes, rising on hills above the lives of the ordinary people, these were also visual reminders of their owners' power over the population.

The fortification that stands on a dominant hill above Matochina village, on the Bulgarian-Turkish border near Svilengrad, was built in the 12th-14th centuries. It is one of the best preserved examples of late-Mediaeval fortresses in Bulgaria. Even today, its weathered and crumbling walls rise up to 18 m.

Some historians identify the tower as Boukelon, a fortress whose predecessor saw the devastating Goth war with the Romans of 376-382 and an invasion by the Bulgarian Khan Krum in 813. In 1205 it witnessed a decisive battle between Bulgarian light infantry and the heavily armoured knights of the Latin Empire. Kaloyan, the Bulgarian king, captured Baldwin of Flanders and kept him there, the legend goes, before getting him over to Tarnovo.
In the 20th and 21st century the tower was excavated and conserved, and can now be visited, if your car survives the heavily potholed road to Matochina.

Melnik is famed for its traditional houses, sandstone pyramids and heavy wines. Bulgaria's smallest town, however, is also the home of a tower with a curious history.

It is, somewhat confusingly, known as Bolyarskata Kashta, or the Lord's House. A ruin now, it was constructed in the 13th century, when the maverick Bulgarian lord Alexius Slav made Melnik the centre of his breakaway dominion. The complex remained in use throughout the Ottoman rule, becoming one of the richest and most lavishly decorated mansions in the town.

Inhabited until the beginning of the 20th century, the house was abandoned when economic hardships befell Melnik and the once lively community, thriving on trade and wine production, fell silent. Today the whole complex is a ruin with a commanding view of the town and its stone pyramids. 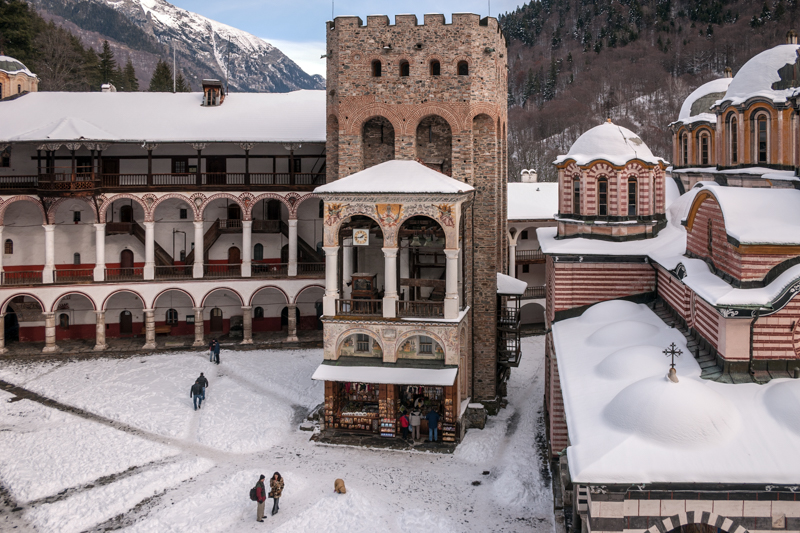 Rila Monastery was established in the 10th century, yet the architecture it is famous for is much later, from the 19th century, with one exception: the massive, 23-metre-high Hrelyu Tower. It was built in 1334-1335 by a local lord to provide shelter for monks and their wealth. The tower proved useful during a number of bandit raids under the Ottomans and even survived the devastating fires that ravaged the monastery in the early 19th century. In more peaceful times, it was used as a prison and an isolation cell for sick and deranged monks.

The tower did not lack basic comforts and amenities: the 3rd and the 4th floor feature latrines. For the modern visitor (the tower is sometimes open and sometimes not) the Hrelyu Tower's most alluring feature is the mediaeval murals in the 5th floor chapel.

The two-storey belfry adjacent to the façade dates from the 19th century.

Vratsa
Vratsa, a quiet town in Bulgaria's northwest, has two old towers. Both were built during the Ottoman domination. 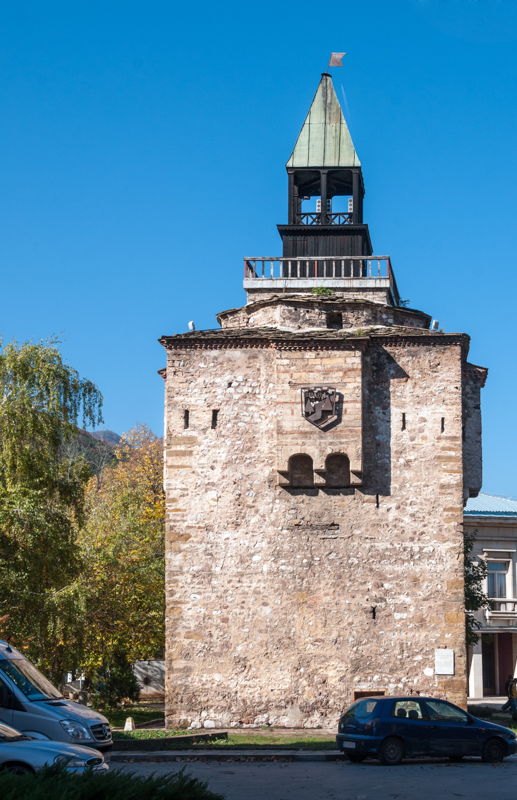 The Meshchii Tower is considered one of the symbols of the city. It is 13.4 m high, its walls are up to 1.5 m thick and it has three residential floors. It was supposedly built in the 16th century by an Ottoman feudal family. Originally, the entrance was 2 m above ground. When more peaceful times arrived, this was walled up and a new entrance was opened at ground level.

At the end of the 19th century, after the erstwhile masters of the tower had departed, it was fitted with a clockwork mechanism. 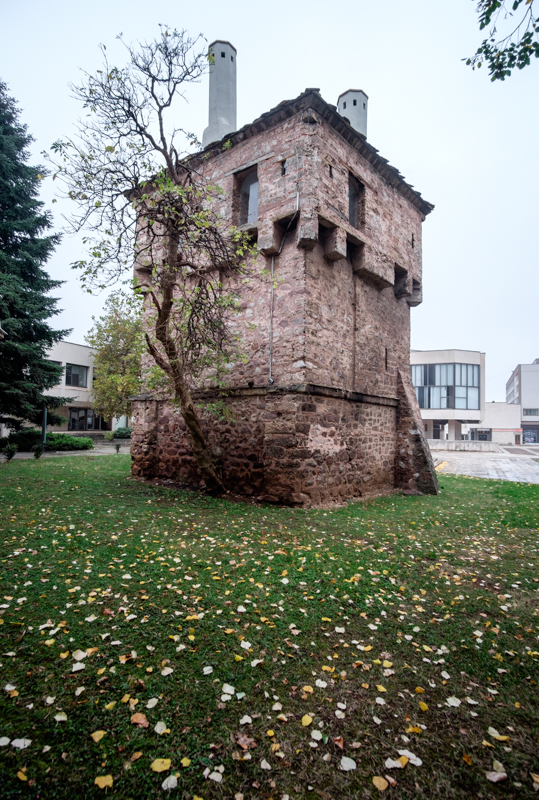 Kurtpashova Tower is only 11 m high, but it looks like a part of a larger mediaeval castle. It has two residential floors, and was probably built in the 17th century. One hypothesis suggests that it belonged to one Kurt Pasha, a Bulgarian originally named Velko or Valko, who converted to Islam. Both Kurt and Velko/Valko mean "wolf." 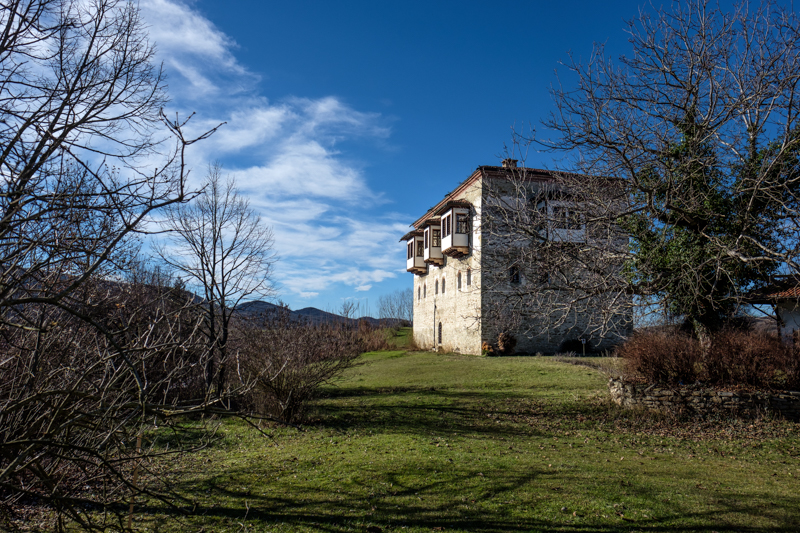 Veliko Tarnovo's "mediaeval" fortifications are largely 20th and 21st century restorations. About 7 km from there, however, Ledenik village preserves a piece of genuine defence building. Dating from 1650, the Shemshi Tower rises on a dominating height above a meander of the Yantra River.

The luxury that its inhabitants enjoyed is visible even from the outside, in the finely carved wooden frames of its projecting bay windows. Inside, the tower was furnished in the best traditions of Ottoman luxury. Until recently, when it was part of a hotel and a restaurant, one could even rent a room in the tower. For some time, however, the enterprise has been closed.

A local legend attributes the tower's name to one Shemshi Bey, whose residence in the village had tragic consequences. The lord's son, the story goes, fell in love with a beautiful Bulgarian girl. She would not marry him and so she drank a poison that made her appear to be dead. In a fashion that you are probably already familiar with, upon hearing the news the lord's son committed suicide. While Shemshi Bey grieved, the girl and her brother ran away to Tarnovo. The lord learnt the truth and exacted a harsh revenge: he executed the fugitives' family. Then it was the brother's turn to take revenge (are you still following the story?). He gathered a group of friends and planned to attack the tower. Scared, Shemshi Bey abandoned everything to run for his life to Tarnovo. 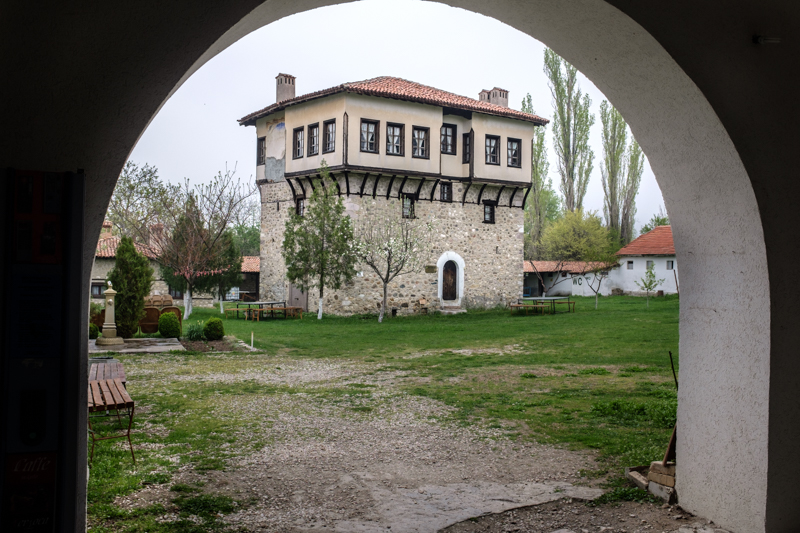 Located on the plain near Asenovgrad, the Arapovski Monastery lacks the protection that monasteries up in the mountains enjoyed, but its architecture compensates for this. The compound looks like a fortress, with strong stone walls and high narrow windows.

The monastery even has a fortified tower in its courtyard.

The monastery was built in the 1850s. Some attribute its construction to a monk. According to others, the initiative and the money belonged to one Angel Voyvoda, a local brigand-cum-revolutionary, whose operations from 1832 to 1862 caused plenty of headache for the Ottomans. The tower still bears his name and is a curious example of massive walls at ground level and rather pleasant living quarters on the upper floor. It is one of the few towers in Bulgaria that can still be visited today. 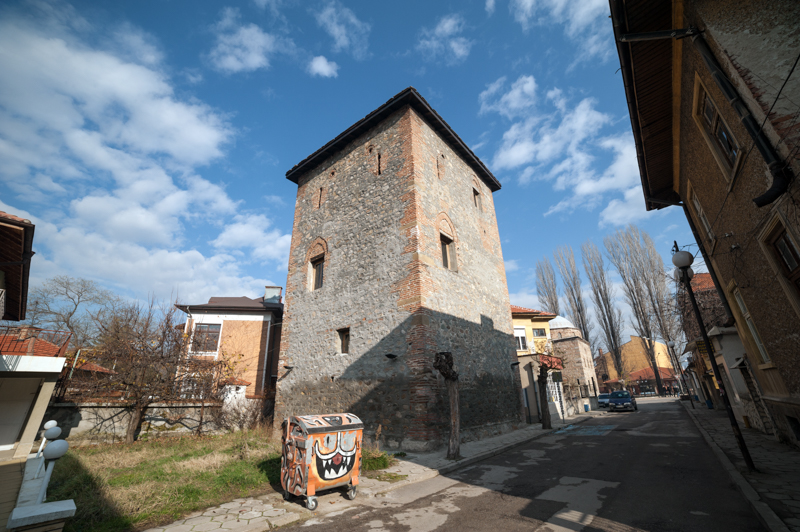 Rising up to 15.5 m, the Pirgova Tower in central Kyustendil does not look like much amid the modern structures. In the 15th or the 16th centuries, when it was built, it would have been much more impressive, rising above the squat neighbouring houses.

The Pirgova Tower is a palimpsest of history and cultural influences. Stones from the baths of ancient Pautalia, the Roman city that existed here, were used for its walls. Its name is borrowed from the Greek Pyrgos, or tower.

The tower has storage spaces on the ground floor and living quarters, latrine included. 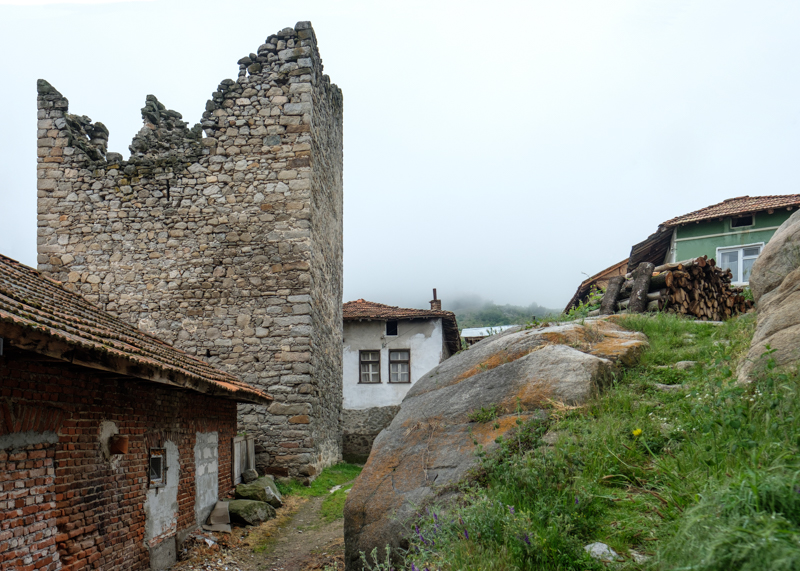 This end -of-the-road village near Gotse Delchev has preserved the remains of yet another tower of unknown origins. The tower is 13.5 m high, but in the 19th century it was higher. Like other towers built in the Ottoman period, it had thick walls and relatively comfortable residential floors. The time of its construction, however, is anyone's guess and historians disagree on whether it was the residence of an Ottoman lord or was a part of an Ottoman system of fortified communication towers in the region.

By the 19th century the local memories about its past were already lost. The tower's heavy door was dismantled and installed in the covered market of Serres, now in Greece. Destruction was helped by locals who used its stones for their church and houses. As late as the 1970s the village bakery was built with construction materials from the tower.

It now stands abandoned, right in the middle of the village, surrounded by houses whose inhabitants have long died or moved elsewhere. Owing to its remoteness and the almost complete lack of visitors the Teshovo tower is perhaps the most atmospheric in
modern Bulgaria.