Most spectacular ways to get from northern to southern Bulgaria, and vice versa

Dividing Bulgaria into two almost identical chunks, the Stara Planina mountain range, sometimes referred to as the Balkan, has influenced this nation's life and history for many centuries. The massive land barrier protects Bulgaria's south from northerly winds. In the Middle Ages, it separated Bulgarians from their main enemy to the south, Byzantium, and consequently all the major capitals were located north: Pliska, Preslav, Tarnovo.

In the 19th century, the mountain range with its deep forests and ravines became the natural refuge for revolutionaries fighting for independence from the Ottomans. Some of the most important battles of the 1877-1878 Russo-Turkish War were fought for its passes.

The Stara Planina has also been an obstacle to travel. The Romans built roads across it, but getting to the other side remained a challenge not only in pre-industrial times but also today. Bulgarians still dream of the time when a tunnel will shorten the trip, but for now everyone relies on the good old passes. Some of them are open year round, but others are closed in winter, or permanently. Guessing which is open or not is often a hard task when on the road, but isn't unpredictability what makes travelling around Bulgaria so much fun?

The Petrohan Pass could have been the fastest route from Sofia to northwestern Bulgaria if it had not been in such a bad condition. However, if you are not in a hurry, this 24-kilometre pass reaching an altitude of 1,409 m is a delight as you travel through beautiful surroundings and tranquil pine forests.

In the autumn of 1923, tranquility was absent. Participants in the September 1923 Uprising barricaded the pass to government forces from breaking into the northwest. They failed.

Today a handful of monuments erected under Communism commemorate these events. One of them states the "important" fact that the leaders of the revolt, Vasil Kolarov and future dictator Georgi Dimitrov, "stopped for a break" in a nearby inn.

On a more peaceful note, Gintsi Village in the pass is famed for its delicious sheep yoghurt and cheese, and the honey and homemade jam sold beside the road by farmers.

The Iskar Gorge through the Stara Planina is not officially listed as a pass, but it is hands-down one of the most spectacular ways to cross the mountains from Sofia.

With its 84 km rising up to 362 m above sea level the Iskar Gorge is the longest in Bulgaria. All along its turns there are sublime vistas and fascinating villages, monuments and monasteries. You can easily spend a whole day there.

Thompson village, transliterated as Tompsan, was named after a British Second World War captain who was parachuted into Bulgaria to liaise with the local guerrilla fighters against the pro-Nazi government. He was captured, tortured and killed. In the middle of the village you can now see a recent monument to him erected by the British Embassy.

After the town of Svoge the cliffs of the gorge become increasingly precipitous. They are at their most spectacular at Lakatnik, where they are crowned with a red monument to the men killed in the Communist-sponsored rebellion known as the 1923 September Uprising.

The gorge has two monasteries of interest. The Seven Thrones Monastery has a charming garden with tall sequoias, and a tiny, dark church that has not one, not two, not three, but seven altars; hence the name.

The Cherepish Monastery is larger. In spite of the uncanny resemblance of bluffs on the cliffs around to human skulls, its setting is serene. You may wish to combine your visit with a trip to the now abandoned seminary and church just to the left by the bend in the river.

Most drivers pass by the Vitinya Pass without even noticing it, as today's traffic goes through a tunnel on the Hemus Motorway. The real pass is higher above the road, a route that was used by generations. To reach it, opt to travel on Road 1 and not on the highway.

Vitinya Pass is 29 km long and 965 m high. In 1934 it was properly paved for the first time and replaced Arabakonak Pass as the main route from Sofia to northern Bulgaria.

Traffic stopped using it the 1980s, when this part of the Hemus Motorway was built.

A major route since antiquity, the pass connecting Zlatitsa to the south and Etropole to the north has been closed for more than 20 years. Locals do use it, weather permitting, as the 24-kilometre pass saves time and mileage.

If you want to try it, a car with good clearance should be enough. Prepare for stunning landscapes and reaching altitudes of up to 1,385 m. When the road forks, you have two options: to continue on the old unpaved route or go through a tunnel that was built during the recent, yet unfinished repair works.

The highest pass through the Stara Planina traverses the 1,525-metre Goraltepe Peak and connects Troyan in the north with Karnare in the south. The route consists of 40 km of sharp bends and precipitous heights, and is closed in winter.

The highest point of the pass is also adorned with an impressive Communist monument. The 35-metre Arch of Freedom is dedicated to Bulgarian-Soviet Friendship and the centenary of the liberation from Ottoman rule. This location was chosen merely because it was spectacular. No actual battle took place there.

Some claim that Alexander the Great crossed here on his campaign against the Thracians, but the Shipka Pass is Bulgaria's most venerated pass for another reason. Located at an altitude of 1,195 m above sea level and 29 km long, in 1877-1878 it was the site of fierce battles between the Russian army and Bulgarian volunteers on one side, and the Ottomans on the other. The Ottomans were trying to push north, but the heavily outnumbered defenders stood their ground. 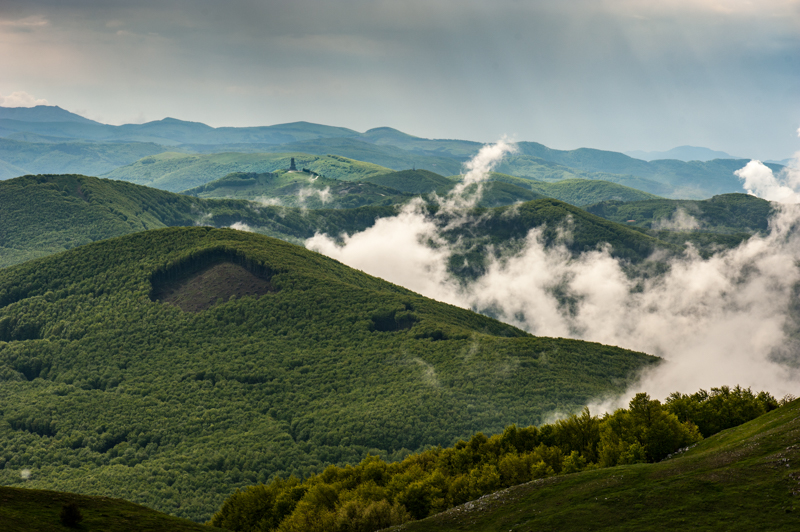 Since the 1930s, a monument topped by a lion at the highest point of the pass has commemorated the Bulgarians. Now Bulgarians visit it year round, their numbers peaking on major national celebrations such as 3 March, and in August, on the anniversary of the fiercest battles. South of the pass, near the village of Shipka, a beautiful gilt-domed Russian church was built to honour the Russian soldiers.

East of the Shipka Pass is Bulgaria's most famous Communist monument, the House Memorial of the Bulgarian Communist Party on Buzludzha Peak, built in 1981. It has a distinctive spaceship design and a 70-metre concrete pillar, once adorned with a gigantic red star. The monument was abandoned after Communism collapsed, in 1989. Due to property issues it is now crumbling away, a powerful symbol of Bulgaria's recent past and present, and a favourite place for taking photos. 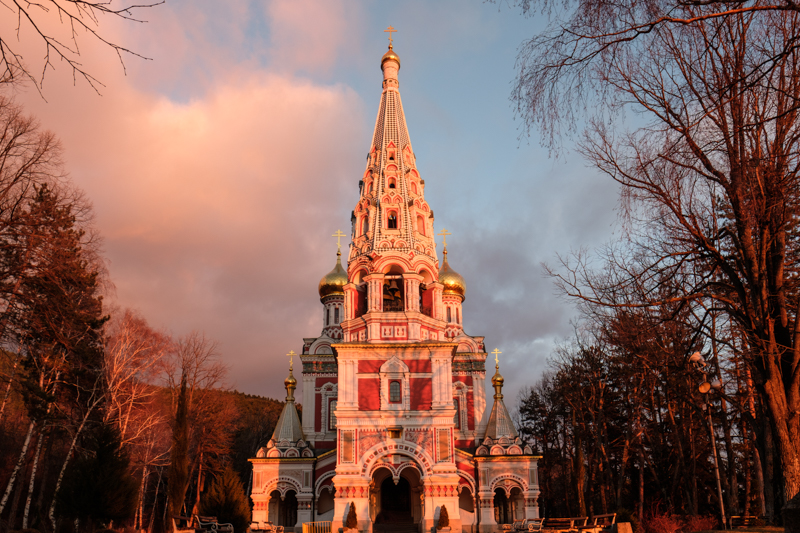 History aside, the Shipka Pass is spectacular. Its northern side zig-zags through thick forests, from the top there are marvellous vistas of the surrounding peaks, and the southern side overlooks the Thracian Plain with its ancient Thracian mounds.

Pass of the Republic, or Hainboaz

Stretching for 57 km through the central Stara Planina, Hainboaz connects Veliko Tarnovo and Gurkovo. As the pass is only 698 m at its highest point, it has been used since time immemorial. 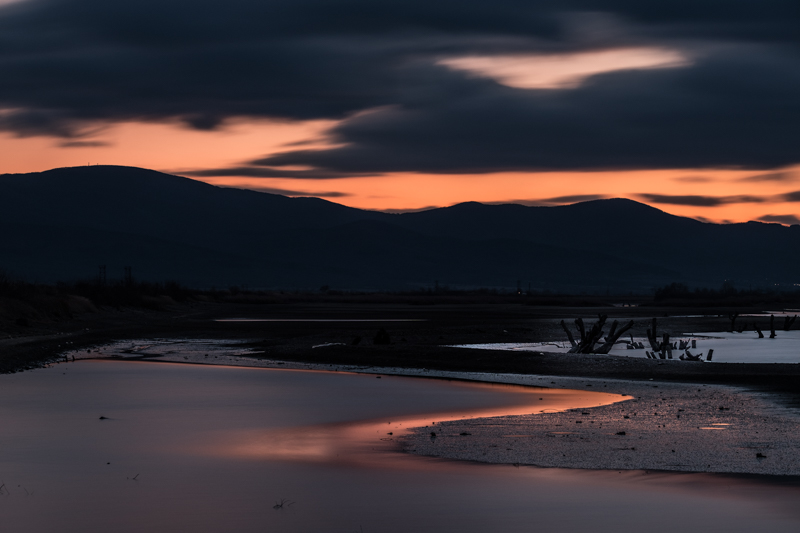 The mountains in this photo are not the Stara Planina, but the Sredna Gora at the southern end of the Pass of the Republic

Making the pass more passable (pun not intended) was among the priorities of the Communists soon after they took over in 1944. The country's new rulers needed bold, new projects to show off. Hainboaz was one of them. In 1946-1947, the Ottoman-era name of the pass was replaced by the more ideologically appropriate Pass of the Republic. Thousands of young volunteers, Brigadiri, were deployed there, laying a new road surface, which remained in use until the 2000s, when parts of the Pass of the Republic was asphalted.

The route goes by several places of interest. Voneshta Voda Village is famed for its sulphurous and smelly hot mineral springs, and Pchelinovo Village claims to be the longest in Bulgaria. Gurkovo has this country's only Donkey Museum. Amid the waters of the nearby Pchelina Dam is a church, which served the community of Zapalnya Village until they were resettled to make room for the dam.

The 22-km pass between Elena in the north and Sliven in the south is full of potholes, but it is worth the journey. Rising to an altitude of 921 m above sea level, it passes through oak forests inhabited by semiwild horses, and Gypsies who make a living out of mushroom picking. 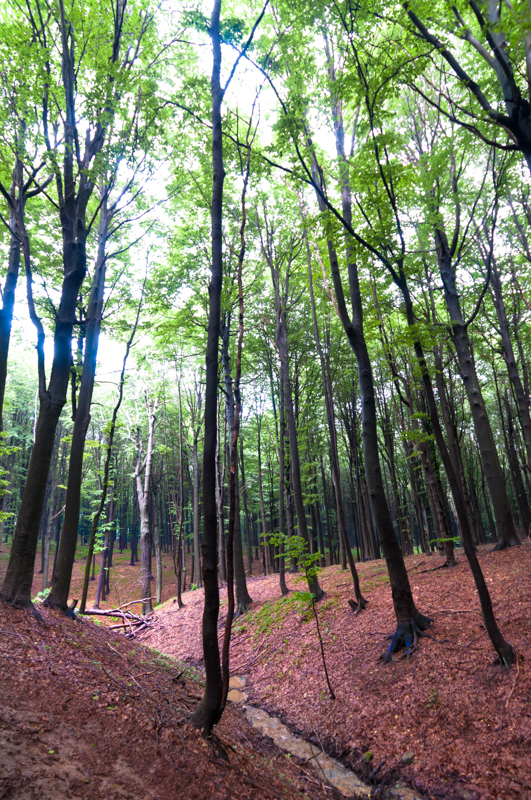 East of its highest point is the source of one of Bulgaria's longest rivers, the Kamchiya. Quite inconspicuously, the river starts as a minuscule spring under a tree.

To the west is Aglikina Polyana, or Aglika's Meadow, an area favoured by 18th-19th century brigands and revolutionaries.

It is only 15 km long and 659 m high, and since antiquity it has been one of the most convenient ways to cross the eastern parts of the Stara Planina. Today, the most interesting places around are Kotel, where beautiful traditional rugs are made, and Zheravna, one of this country's best preserved traditional villages.

A monument in the pass is a reminder of the times when crossing the Kotel Pass was not as boring as it might appear today.

The Sentries of Stone monument was erected in 1981 to commemorate the 17 July 1280 battle in which King Ivaylo defeated the troops of Byzantine Emperor Michael VIII. Ivaylo was an ordinary man who started a peasant rebellion prompted by the inability of the central power to halt the incessant incursions by Tartars. He managed to gain the throne for himself. Under Communism, Ivaylo's rebellion was represented as the first antifeudal uprising in the world and Ivaylo himself was described as the progenitor of the Communist movement.

Snaking through the lower slopes of the Eastern Stara Planina, the 11-kilometre Aytos Pass is mostly unspectacular. The Wondrous Rocks at Tsonevo Reservoir, a small geological curiosity, compensate.

Sometimes it can get a little crowded, as people travelling from Sofia to Varna prefer to take the Trakiya Motorway and then on through the Aytos Pass, rather than brave the unfinished Hemus Motorway.

Connecting Burgas and Varna, this is the Stara Planina's easternmost pass. Nearby are Irakli, one of Bulgaria's last wild beaches, and Sunny Beach, Bulgaria's largest seaside resort.

A potholed road diverting from the pass leads to the place where the Stara Planina meets the Black Sea, forming the picturesque Cape Emine.

Once this area teemed with life, but today there are few people around. The houses in the village of Emona are mostly empty and a single, forgotten church is all that remains of the once thriving Emona Monastery.