text and photography by Anthony Georgieff
Rate this item
(0 votes)

A composite of Perseid meteorites over Buzludzha in 2019

How to capture celestial lights with camera

Bulgaria, sadly, is small enough to provide any true dark sky location like Norway, Scotland or the American Southwest. Wherever you travel in the Bulgarian mountains or along the Black Sea coast you will never be sufficiently removed from a city or town to be able to see all of the stars twinkling in a genuinely "black" sky. However, with a bit of research you will be able to at least observe the seasonal meteorite showers over the northern hemisphere. And with the right approach you will capture fantastic images that will stun friends and families back home.

Meteorites can appear any time of the year but meteorite showers are seasonal events that have been watched and researched for millennia. Number 1 on your to-do list is to do some planning. There are countless free apps designed to inform of most type of celestial events from solar and lunar eclipses in the next 100 years to annual happenings like the Perseid meteorites (usually peaking on 12-13 August) to the Geminids (peaking on 13-14 December). In-between, there are many others.

Number 2 would be to find a (relatively) dark sky location. Get away from Sofia, Plovdiv, Burgas and the other big towns. Possibly some remote mountain valley in the Rila or the Rhodope will do. However, with some luck you will be able to see some brighter shooting stars even above a large town with its light pollution. As a sideline to your dark sky location search, bear in mind that the moon, which many consider to be the most gorgeous celestial body, is an enemy of the meteori.tes. When it is full, it is billions of times brighter than the brightest meteorites, and as such will be the biggest source of light pollution. As far as your shooting star photography is concerned, try to go out on a moonless night. It must be cloudless as well. 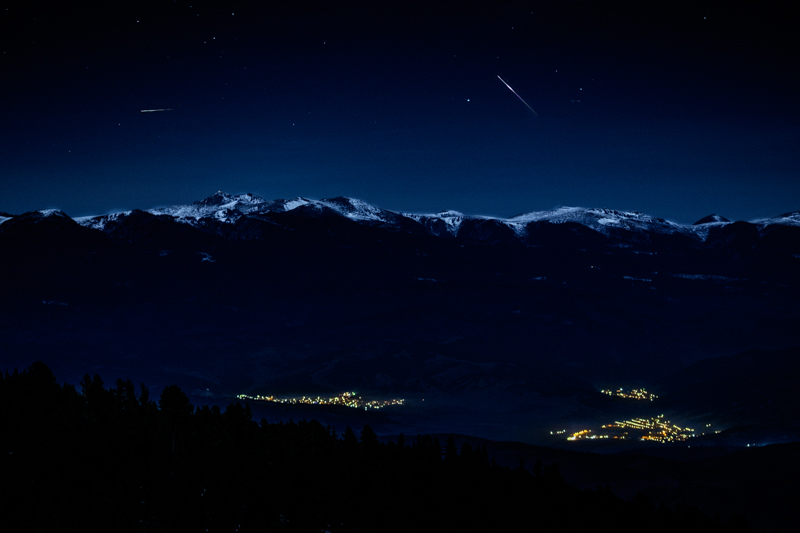 A Geminid bolide and a meteorite over the Rila Mountains, captured in a single shot in 2017

Then there comes the issue of equipment. Number 3 on your planning list is the trio of a camera, a fast, wide-angle lens and a sturdy tripod. You can "shoot" shooting stars with any camera but obviously a pro grade DSLR or a good APS-C mirrorless will deliver better results than a point-and-shoot. Leave your iPhone in your pocket. Your lens must be wide-angle, some would say as wide-angle as possible, and as fast as possible. Many people tend to overlook the importance of a good tripod. Needless to say, it is at best silly to economise on a tripod provided you've spent thousands of dollars on the camera and the glass, so just bear in mind that a bad tripod is worse than no tripod at all.

Proceed to your chosen destination and set up the gear. Everything should be set to manual. Your f-stop should be the lowest possible (f2.8, f2.0 or lower). Your colour balance must be set to anywhere between 2,800-3,400 K. Your ISO and your shutter speed will be determined by trial and error. Remember, a shooting star lasts a split second. Your shutter speed and ISO will only register your surroundings. What will get the shooting star itself is the f-stop. 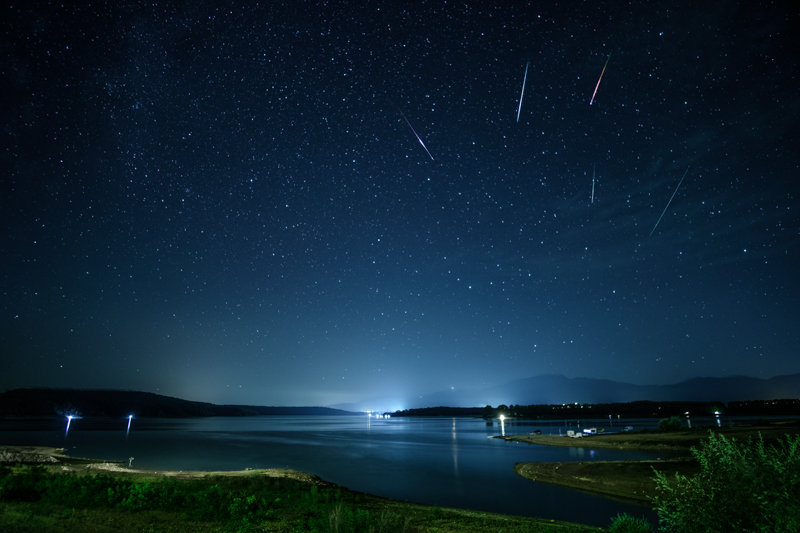 A composite of Perseids over the Koprinka Reservoir in Central Bulgaria

Set up your tripod, put the camera on it, focus manually to infinity and take a couple of test shots. It would be helpful to use a high ISO number for the test shots, e. g. 12,800. You will not use those pics later on, but it would be great to see better on your camera display what your composition looks like.

Once you've made sure you have done all of the above, you can switch on your camera's intervalometer for as long as your battery will last. Now sit back, look up and enjoy the show. To catch about a dozen good meteorites during the Perseid shower you will need about two-three hours. The meteorites will come at a rate of 80-120 an hour, but your camera will not register more than a couple in a single frame. Some meteorites will be faint greyish lines in the sky. Others, however, will be bolides – fireballs caused by meteors that explode in the atmosphere in all of the colours of the rainbow. Those are the ones that appear best on pictures, but to see them you need a bit of luck.

Once you are back home and have uploaded your pictures into your computer there comes the really important part: culling and post-processing. While culling may seem obvious, it is not as easy as it may seem at first glance. You will want to keep all of these shots featuring at least one meteorite, but some of those will be so faint not to be barely noticeable. While it is up to you to keep whatever you feel like and delete the rest, here is a word of caution. Unless your HD is hard-pressed for empty space, it would be prudent to delete with caution. Remember: you can delete what you don't need later but you cannot "undelete" what you've already thrown away. 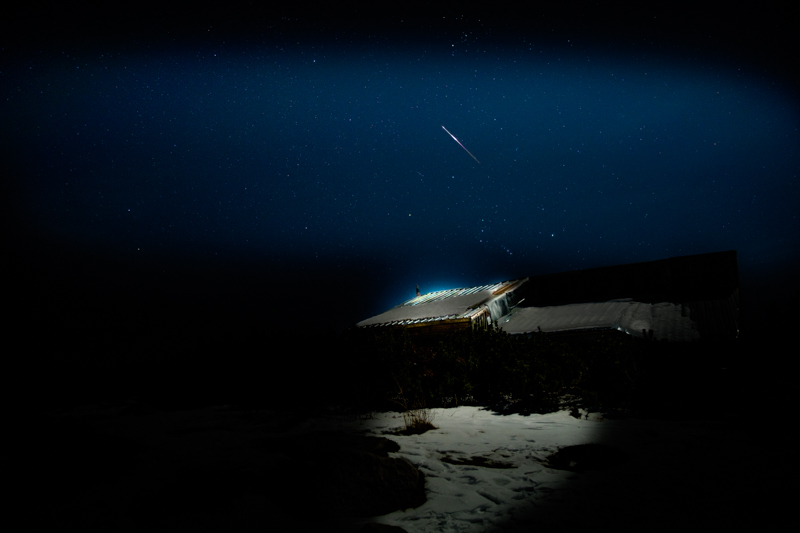 Post-processing of meteorite shots is a science in itself. There are two school of thought here.The purist commands that you should manipulate as little as possible. Maybe change the colour balance a bit, make the Milky Way "pop" and darken some of the airglow over a nearby town, but that's about it. Photography should be about the captured moment. The other school of thought, however, argues that photography, especially digital photography, has little to do with its analogue progenitor and a lot more with other artistic media such as film and music. A filmmaker shoots a dozen cuts and then rejiggers them to produce just one scene. Similarly, each member of a music band records their own bit and then the sound engineers step in and mix the whole thing into a coherent tune.

Translated into photography terms, this means that you either stick with a few images featuring single meteorites or mix many of your images into "composites," altering the actual reality of your experience under the stars but enhancing the viewers' expectations of what a real meteorite shower looks like.

Whether you go for the former or for the latter (in which case you need at least some basic knowledge of Photoshop or similar) is completely for you to decide. Perhaps the photographs accompanying this article, which have been taken in the course of about seven years strictly in Bulgarian skies, will help you make the right decision. 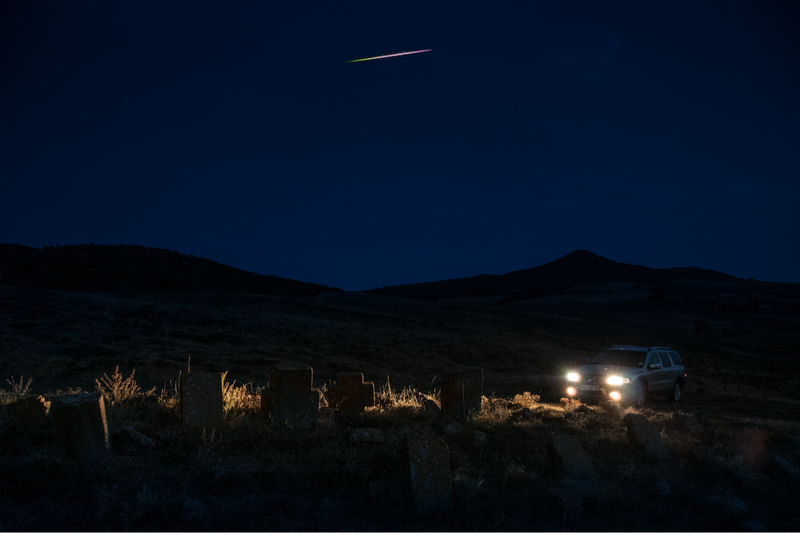 A single bolide over an abandoned cemetery next to Malka Polyana village near Aytos, in southeastern Bulgaria 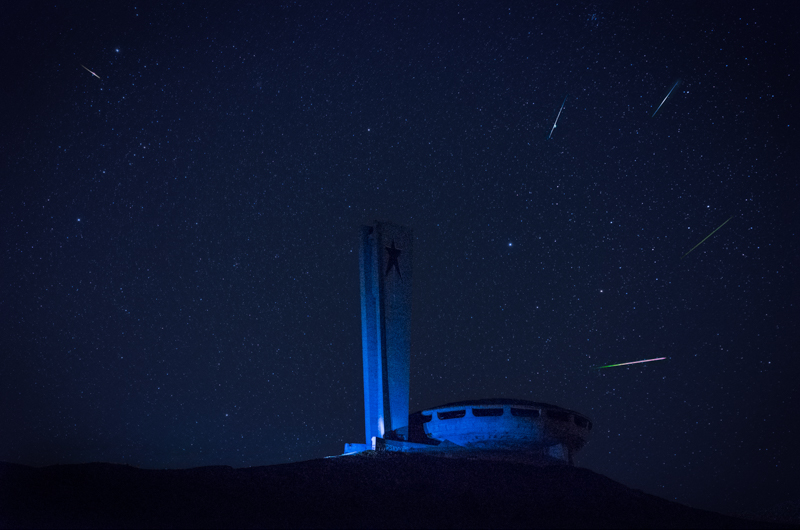 A composite image of the 2016 Perseid shower caught above Bulgaria's infamous Flying Saucer, the Communist-era monument erected on top of Buzludzha peak 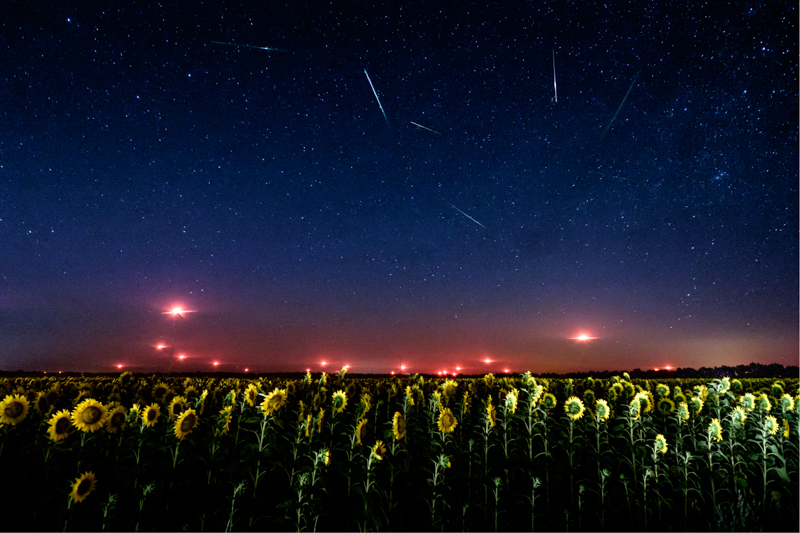 A composite of Perseid meteorites over a sunflower field near Balgarevo, at the northern Black Sea coast. The red lights that look as if they come out of alien spaceships are in fact the top lights of turbines in a nearby wind power engineering park