Triangles fascinate the imagination. Throughout history, the geometric shape defined by Euclides as three points that do not lie on the same line has been laden with religious and spiritual symbolism. It has also been connected to topography, such as the Egyptians pyramids, the so-called ley lines, and the Bermuda triangle, supposedly marking energy vortices.

Recently, Bulgaria also got its own mystic triangle, a piece of land entwining ley lines, geography, history, archaeology and ancient and modern myths. When viewed on Google Earth, the Mount of the Cross Peak, the Belintash Plateau and the Karadzhov Kamak Rock in the Rhodope form an almost equilateral triangle, believed to be the outline of a millennia-old sacred space. The three points are said to embody a special energy connected to life, death and divinity.

The area of the Rhodope where the so-called Sacred Triangle is located is eons old. Its rocks were created when life on Earth was still in its infancy, and its folds and peaks began to take shape when dinosaurs were turning from a dominant life form to fossils. Today, the region is a maze of peaks and plateaus, deep valleys and meandering rivers, bare hills and green meadows. Throughout the millennia, people have managed to scrape a living here, cutting wood in the forests, grazing sheep in the meadows, digging copper in shallow mines. One of the major routes between the Thracian Plain and the Aegean coast is nearby, but even today an atmosphere of isolation persists in the area. Tellingly, one of the villages here is called Vrata, or Door, as it is the only place where the slopes open to the outer world, with the Thracian Plain and even the Stara Planina mountain range in the distance.

This garbled topography makes exploring the area of the Sacred Triangle slow. Reaching each of the points requires a long drive and/or a hike. An extremely fit visitor can walk to the three spots in a day, but most people opt for the less exhausting drive to Belintash and the Mount of the Cross. Karadzhov Kamak Rock cannot be reached by car.

According to Internet lore, the 1,413 m Krastov, or Cross, Peak and the locality of Krastova Gora, or the Mount of the Cross, mark the "divine" point in the so-called Sacred Triangle. It is the only one of the three that is an active religious site, and a very popular one. 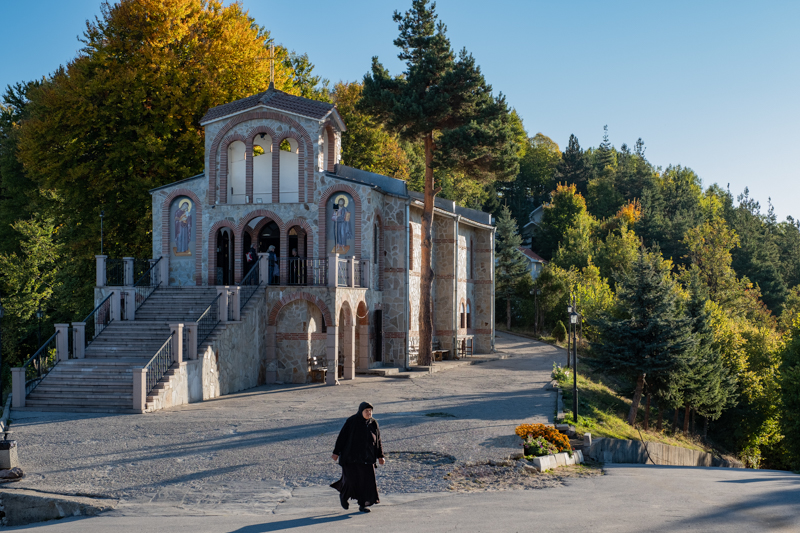 The new church at Krastov Peak

The Mount of the Cross is at the end of a twisting road that turns off the route between Asenovgrad and Smolyan. The natural surroundings are stunning, and there is an old, austere and overlooked church at the locality, but the rest of the area hardly inspires spirituality. The other church, the Holy Trinity Monastery and the 12 chapels on Krastov Peak were all built in the 1990s when Bulgarians were regaining their religiousness after 45 years of Communism – and it shows.

However, people come here year round in the belief that staying on the Mount of the Cross can cure all illnesses. The crowds are at their thickest on 14 September, the High Day of the Cross.

It is not clear how this became a place of pilgrimage. Guidebooks published in the 1970s, at the height of the atheist Communist regime, claim that when the Ottomans conquered the Rhodope and started converting local Christians (the historical accuracy of this is disputed), priests from the area would bury the crosses from their abandoned churches at the peak. On the Internet, another legend makes the rounds. Envoys of the Russian Tsar were forced to bury there a piece of the Holy Cross they had obtained from the sultan's treasury, which soon started to perform miraculous cures.

Modern pilgrimages to the Mount of the Cross started in the early 20th century, after a local man had a dream about the sacredness of the place. In the 1930s, the site became so popular that King Boris himself donated a metal cross that stands on the peak to this day.

Pilgrims were few and far between under Communism. The site was included in the Rhodope network of tourist paths, but the proximity of the Kormisosh hunting ground, created in the 1970s for top apparatchiks, discouraged visitors. The pilgrimage to the Mount of the Cross restarted soon after the collapse of Communism in 1989.

The Mount of the Cross is the most convenient way to reach Karadzhov Kamak Rock, the point in the Sacred Triangle supposedly connected with death. This natural phenomenon is a 2-hour hike through the Kormisosh hunting ground on a clearly marked path.

Karadzhov Kamak is named after a legendary local brigand who was killed at that spot by the Ottomans. The ragged, narrow plateau rising from the forest looks worthy indeed of a legend. It can be reached only through a 18-metre stone arch accessible via a set of unmaintained wooden steps. People with a fear of heights will find it difficult to climb these. Those who do are rewarded with panoramic vistas of the area, complete with a view of the Belintash Plateau.

Limited archaeological research at Karadzhov Kamak has found that the ancient Thracians had a shrine there, in the 8th-6th centuries BC and the 3rd-4th centuries AD. The only visible remains of it today are some weathered steps carved in the rocks and shallow basins once used as altars. 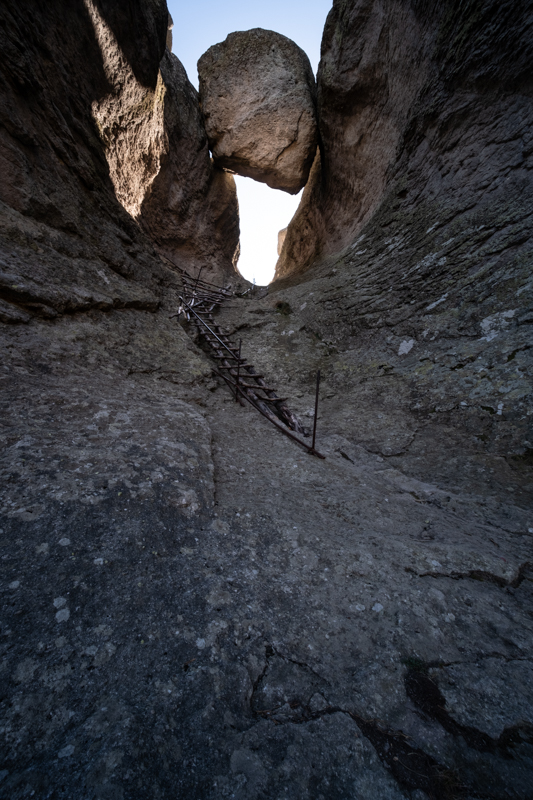 Many more traces of Thracian religious activity are to be found on Belintash, the point of the Sacred Triangle connected to life. The marked trail from Karadzhov Kamak to Belintash is about a 4-hour hike through some demanding terrain, so most people return to the Mount of the Cross, drive to Asenovgrad, head to Kardzhali and then towards Mostovo Village. The drive to what as the crow flies is about a mile thus becomes 76 km and takes 2 hours.

Belintash is a narrow plateau that rises to 1,225 m. Slightly tilted and accessible by a rickety metal staircase, it is covered with a network of canals and basins, created by the ancient Thracians while the plateau was a thriving religious centre.

The ancient Thracians arrived here sometime in the 1st millennium BC, and they saw the plateau as an embodiment of the powers of their main deities, the Great Goddess and the Great God. They abandoned the shrine for some reason, but returned in the 4th-6th centuries AD, ironically just as Christianity was becoming the predominant religion in the region. Eventually, they abandoned Belintash for good. 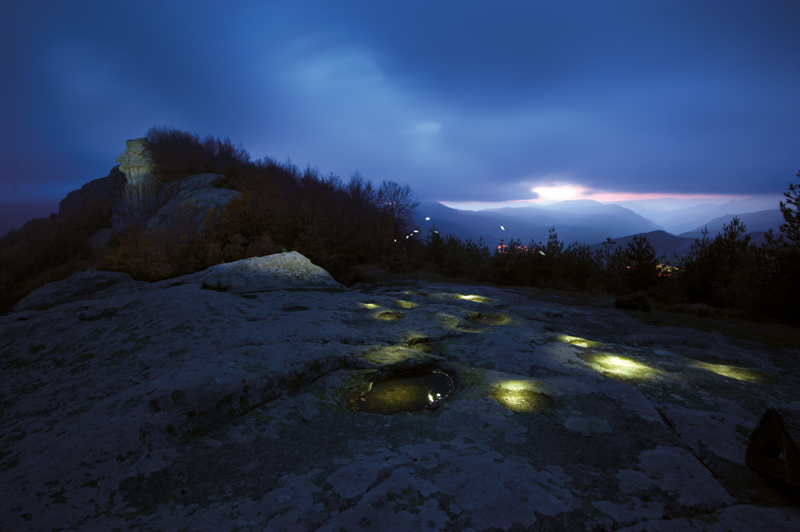 Some believe that Belintash plateau will "reveal its secrets" only after seven, nine or 13 people die in accidents there, a type of blood sacrifice

Since the early 2000s, when a group of psychics claimed on national television that they had experienced weird phenomena, possibly connected to extraterrestrials, interest in Belintash has been on the rise. Today the extraterrestrials are mostly forgotten and new legends are being told, retold, invented and reinvented. They concern anything from hidden gold, secret messages from the ancient Thracians, larger-than-life faces carved into the rocks and so on.

Belintash now attracts a steady flow of weekend tourists bearing selfie sticks and wearing flip flops. In a couple of years, they have covered the plateau with the hallmarks of religion, superstition, mysticism and hype, peppered with nationalism, that is so typical of modern Bulgaria. A Bulgarian flag flutters over the ancient shrine, martenitsa cover the shrubs, 20-stotinki coins fill the basins, notes with wishes for love, health and world peace are tucked into a tree, and a new, unapologetically ugly church stands, unfinished, at the entrance.

Belintash now seems devoid of any aura of sanctity, be it real or imaginary. At such a place, you realise that sacredness, just like beauty, is in the eye of the beholder.