WHO WERE CYRIL AND METHODIUS?

Statue of Ss Cyril and Methodius in front of the eponymous National Library in Sofia. As the building was constructed during Communism, the façade inscription omitted "saints" from the brothers' names

The image of two men, one young and sporting a dark beard and the other older and white-bearded, with books and parchments in their hands, are to be found all over Bulgaria. There are countless statues and posters, church murals and icons. Their images multiply on 24 May, when long processions of students crowd the central streets of every city carrying posters, usually decorated with flowers.

Their names are also to be seen everywhere: on schools, streets, the National Library and one of the oldest universities in the country. This is an impressive feat for two people who lived 1,200 years ago and who, according to some historians, were not even Bulgarian.

Born in 9th century Salonika, Cyril and Methodius achieved something which still shapes the cultural landscape of Bulgaria and Europe. As with so many things, it started with politics.

In the mid-9th century, thousands of pagan Slavs had settled within and around Byzantium, forming a buffer zone between that state and Rome. Both centres of power were keen to spread their own form of Christianity among these Slavs as an effective tool for gaining political influence in medieval times. 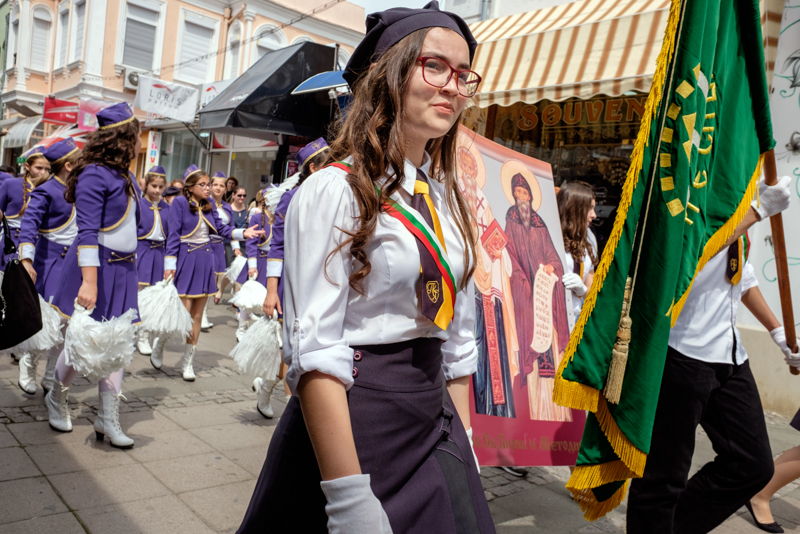 Bulgarian students parade in central Burgas on 24 May, Day of Ss Cyril and Methodius, the Cyrillic alphabet and Bulgarian education, science and culture

In Constantinople, Patriarch Photios had a bright idea. At that time, only three languages were permitted for the saying of mass and the copying of the Holy Scriptures: Hebrew, Greek, and Latin. What if, Photios thought, Byzantium preached to the Slavs in their own tongue? Translating the Bible and the liturgy into a language they could understand would very likely convert more souls, and increase the influence of Byzantium. Emperor Michael III liked the idea, but there was a hurdle. Greek letters were unfit to express all the Slavonic sounds. A new alphabet, tailored to the phonetics of the Slavonic language, had to be created. This would require someone with a deep knowledge of the Slavonic and other languages, and also of Christian philosophy and scripture.

Fortunately for Photios and Michael III, they had such a man. Born in the 820s into the family of a Thessaloniki official, Cyril was fluent in Slavonic. Bulgarians claim that he had learnt the language from his supposedly Bulgarian mother. Another explanation is that he picked it up from the many Slavs in the city. Besides being a brilliant linguist, Cyril was also an accomplished philosopher. He was less than 40 when he was sent to proselytise among the Khazars in the Crimea. He produced some impressive arguments but ultimately failed, as the Khazars opted for Judaism. However, the Khazar Mission established Cyril as an exceptional theologian and public speaker.

When in 862 Prince Rastislav of Great Moravia (today part of the Czechia and Slovakia), asked Emperor Michael III for missionaries to convert his people to Christianity, Cyril was the obvious choice. By the time when he and his elder brother Methodius, who was a scribe, left for Moravia, Cyril had already devised an early version of the Slavonic alphabet. 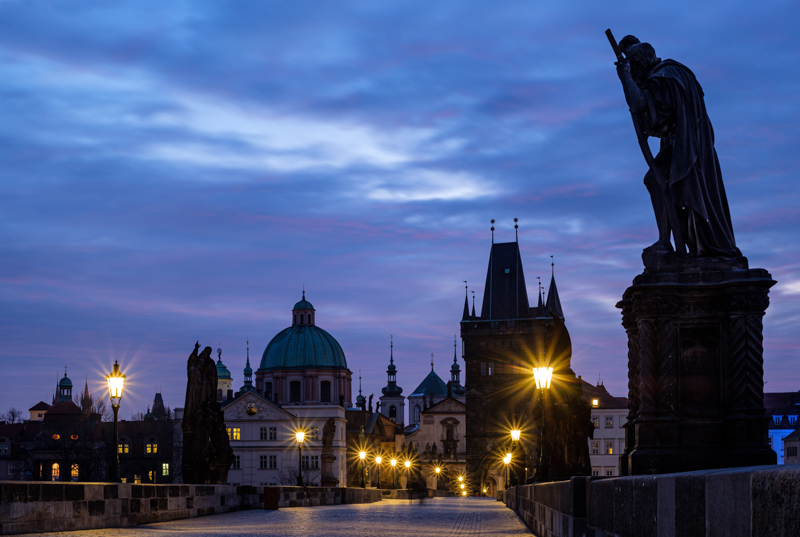 A statue of Ss Cyril and Methodius is among the sculptures on Charles Bridge, in Prague

Known today as Glagolitic (the name comes from the Slavic verb glagoliti, to speak), it looks strange to modern eyes and rightfully so. Many of its letters were borrowed from Armenian, Coptic and Hebrew scripts, and others were Cyril's invention.

Upon arrival in Great Moravia, the two brothers wasted no time. They started translating the Holy Scriptures and teaching local boys the Glagolitic alphabet.

Initially, they were welcomed, but things did not go smoothly. Rome sent its own missionaries to Great Moravia and protested that the Byzantine monks were using an uncanonical language to say Mass and for the holy texts. In 867, Cyril went to Rome where he successfully argued the use of the Slavonic language and alphabet in church and scripture. He never left Rome. In 869, he fell ill and died, aged 42. Cyril was buried with full honours in the San Clemente Basilica. His tomb has been a destination for Bulgarian state dignitaries for many years.

Meanwhile, Methodius remained in Great Moravia. He advocated the use of the Glagolitic alphabet for 20 years, but finally Western Christianity prevailed. Soon after Methodius died, in 885, aged 69, the pope banned the celebration of mass in the Slavonic language. Methodius's most trusted disciples were expelled.

This is when Bulgaria entered the story. 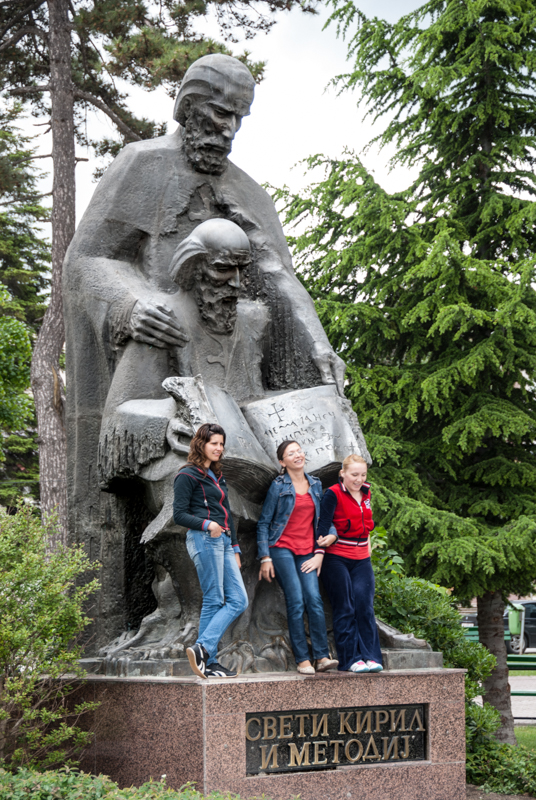 At that time, the Bulgarian nation was still being formed from the amalgamation of pagan Bulgarians, who mostly controlled the government, a Slav majority, and what had remained of the ancient Thracians. In 863, Prince Boris I adopted Eastern-rite Christianity as a means to unite the constituent groups who prayed to different pagan gods. By the 880s, he had already realised that adopting Christianity from Byzantium had paved the way for unwanted Greek political influence in Bulgaria.

The disciples arrived in Bulgaria in such bad health that only two of them survived the ordeal, but the work of Konstantin in Preslav, and of Kliment in Ohrid, now in North Macedonia, had a dramatic effect. They versed dozens of young boys in the new script, and laid the foundations of Bulgaria's own, Christian culture. Used both in church and by the administration, the Slavonic language bonded the nation.

In the first half of the 10th century, Bulgarian scribes replaced the Glagolitic with a simpler alphabet, based on the Greek script. The Cyrillic kept some Glagolitic letters, like the Hebrew borrowings shin, or ש, that had become the ш, and tsade, or צ which was now the ц.

Soon Bulgarians started spreading Christianity to other Slavs, like the Russians, using the alphabet to help their mission. Today, the script is used in Bulgaria, Serbia (concurrently with the Latin script), North Macedonia, Ukraine and Russia. Even non-Slavic speaking Romania used it until the early 19th century.

The Glagolitic alphabet survived in Croatia for centuries, and was used for religion purposes as late as the 20th century.

The achievement of Cyril and Methodius was recognised even by their contemporaries. The Catholic Church celebrates their feast day on 14 February, the day when Cyril died. In 1980, they were declared co-patron saints of Europe. In East Orthodoxy, their feast day is on 11 May. Their disciples also became saints in Bulgaria.

Text in the Glagolitic script at Zagreb Cathedral. In Croatia, the alphabet is also a source of national pride

In the following centuries, the Cyrillic alphabet became one of the pillars of Bulgarian identity. It proved crucial during the 500 years of Ottoman domination when Bulgarians lacked official institutions of their own and were again threatened with cultural assimilation by the Greeks. Amazingly, in the 18th and 19th century, when many Bulgarians were again being seduced by the more refined Greek culture, the Slavonic alphabet was what saved the nation, 1,000 years after its invention. In the mid-19th century, Bulgarians started to celebrate Ss Cyril and Methodius Day very publicly and with great aplomb. It was one of the first Bulgarian-only days celebrated by Bulgarians, a demonstration of identity and a rallying cry for Bulgarian nationalism.

When the Bulgarian state was restored, in 1878, the Day of Ss Cyril and Methodius increased in popularity. It became also a day of Slavonic and Bulgarian literacy and culture, and was marked by openair liturgies followed by mass rallies of school pupils, students and everyone working in education, science and culture.

After the 1944 Communist coup, the day remained in the calendar, but changed to fit the new state ideology. The rallies remained, but the liturgies were removed. The "saints" were dropped from the name of the holiday, and it became simply the Day of Cyril and Methodius.

Alphabet Day continues to be a major celebration of youth and education in Bulgaria, and Bulgarian schools have their proms around that time. Although the religious holiday is on 11 May, the official institutions and the overwhelming majority of Bulgarians celebrate it in the New Style, on 24 May. In North Macedonia and Russia Ss Cyril and Methodius are also venerated on this date while in Czechia and Slovakia, the feast is on 5 July.