The Valley of Thracian Kings has the highest density of burial mounds in Bulgaria. The mound in this picture is Golyama Kosmatka, where an elaborate tomb and an awe-inspiring set of artefacts were discovered in 2004

The Valley of Roses: Until recently, the picturesque valley between the Stara Planina and the Sredna Gora mountain ranges was known by this name, as it is the centre for the production of the famous Bulgarian attar of roses.

By the turn of the 21st century another name for this area had popped up and registered in the public consciousness, conjuring up images of hidden treasures and histories untold – Valley of the Thracian Kings. The term was coined, obviously, to evoke parallels with the Valley of the Kings in Egypt, by Dr Georgi Kitov, the archaeologist who worked in the area in the 1990s and 2000s and made some of the most fascinating discoveries there. The region, he asserted, had been part of the mighty Odrysian Kingdom and the preferred burial ground for the Odrysian nobility for centuries, resulting in the creation of about 1,300 tumuli. Of them, about 300 have been archaeologically researched. The greatest concentration of monumental tombs under mounds is between the modern town of Shipka and the village of Kran.

Among so many mounds and tombs, there is one that stands out: the Kazanlashka Grobnitsa, or the Kazanlak Tomb. It had been discovered completely by chance long before Dr Kitov.

On 19 April 1944 a group of Bulgarian soldiers were digging a trench in a huge 40-metre-wide mound, which contained the bricks-and-mortar remains of an abandoned shrine over the tomb of a Muslim saint, when their shovels struck a stone wall. The men broke through the wall and found themselves in a short corridor. A stone door lay broken on the ground, and frescoes of fighting men covered the walls. 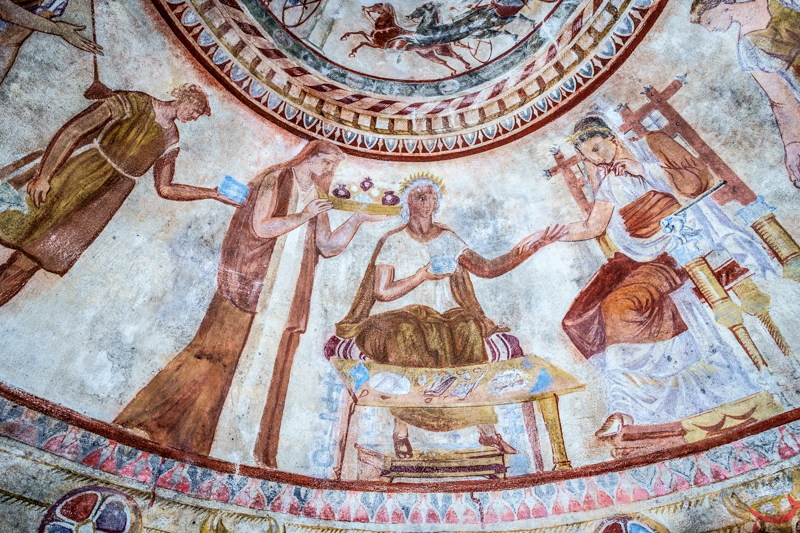 Saying goodbye to earthly pleasures or just enjoying the bliss of afterlife? The meaning of this scene from the Kazanlak Tomb still baffles

The soldiers immediately called the director of the local history museum, Dimitar Chorbadzhiev. Under the pen name Chudomir, he happens to be one of Bulgaria's most beloved short-story writers. He recognised the importance of the discovery, and called for professional archaeologists.

The painted corridor led into a claustrophobic chamber – 2.65 m wide and 3.25 m in height – with a beehive-shaped cupola covered with even more impressive frescoes, one of the best preserved examples of ancient European painting ever discovered.

The murals of the Kazanlak Tomb still inspire awe. The battling men in the corridor seem almost alive in their frenzied action, although it is not clear if they represent a battle won by the deceased owner of the tomb, or are acting out a commemorative event. In the burial chamber, three chariots chase each other, in an eternal circle, around the keystone of the cupola.

But it is the main frieze in the burial chamber that makes the Kazanlak Tomb a must-see. It depicts a man and a woman feasting, surrounded by musicians, servants and their beautiful purebred horses. It is true that Herodotus wrote that some Thracian tribes celebrated the deaths of their loved ones as a joyful occasion, as they believed that dying freed men from the sorrows of earthly life, taking them to a better place. But the beautiful face of the veiled woman, who is sitting next to the wreathed man, her white hand gently resting in his, is unmistakably sad

The meaning of the scene is open to interpretation. It could depict the funeral feast of a deceased noble, who has been deified after his death. Another idea sees it as the mythological wedding of a deified man and the daughter of the Great Goddess. The Great Goddess herself appears in the fresco: the highest of all the figures in the frieze, carrying a plate of pomegranates, the fruit associated with the afterworld.

Whatever the meaning of the frescoes, the talent of the artist is not in dispute. The tomb was probably painted by a Greek painter in the first half of the 3rd century BC.

In 1979 UNESCO put the Kazanlak Tomb on its World Heritage List. Due to preservation issues, the tomb is closed to the public, but visitors can view an exact replica, erected just a few steps from the original.

Constructed in the 4th century BC, the Ostrusha Tomb near Shipka preserves another small but personal fragment of fresco painting; on the ceiling is the face of a fine lady with white skin and red hair. The architecture of the tomb is also remarkable. It was hewn from a monolithic stone block which was covered with another monolith, carved in the shape of a Greek temple roof. The structure was surrounded by several other buildings, of which, sadly, only the foundations have been preserved.

The Kazanlak and Ostrusha tombs, along with many more in the area, were excavated long after their interiors had been plundered by ancient or modern treasure-hunters, but in 2004 Dr Kitov's team literally struck gold – twice. 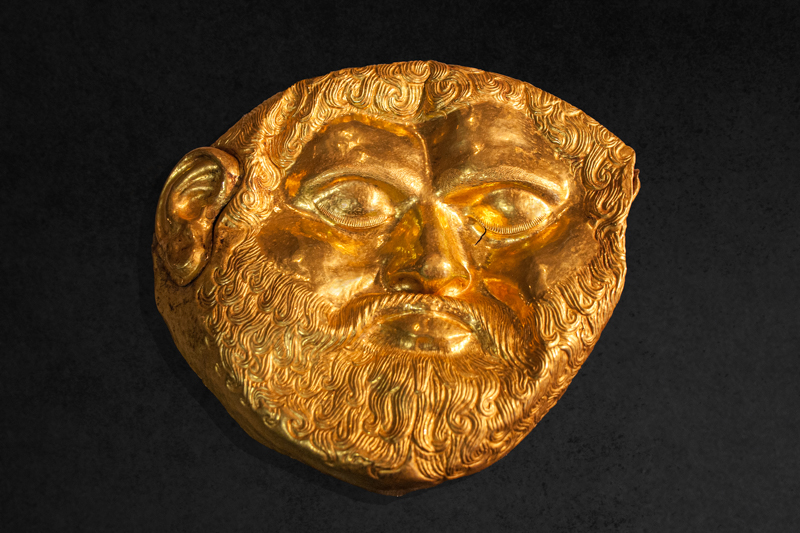 The golden mask of the man buried in Svetitsata mound in the second half of the 5th century BC, weights 673 gram

In August the team were excavating an ostensibly uninteresting grave in the Svetitsata Mound, near Shipka, which had belonged to a Thracian aristocrat from the second half of the 5th century. Despite its unpromising appearance, the contents of the grave turned out to be astonishing: a collection of top-quality weapons, expensive imported vessels and a 673-gram gold mask of a bearded man. The skeleton of the deceased was also there, although some of the bones were missing, suggesting posthumous ritual dismembering.

Why did the Thracians do that? They were probably recreating the myth of Orpheus, who was torn apart by the maenads, or of Dionysus, who was destroyed by the Titans. The dismemberment could point to the deceased being a follower of the mystic teachings of Thracian Orphism.

For Dr Kitov, the man in the mound had to be none other than the Thracian king Teres (turn of the 6th century BC – 450/448 BC), and although some historians remain unconvinced, the contents and the mound are advertised as connected to Thracian royalty.

The media was still in a frenzy over the Svetitsata finds when, in September, Dr Kitov's team was in the news again. In the nearby Golyama Kosmatka mound they discovered one of the biggest and best preserved aristocratic tombs in Bulgaria.

This tomb has a 13-metre-long corridor and two antechambers, the second of which is circular, with a 4.5-metre-high cupola and is protected by a marble door. Next is a rectangular burial chamber hewn from a 60-tonne monolith, which contained more than 70 items: a wealth of expensive weapons and precious objects, including a beautiful gold wreath. 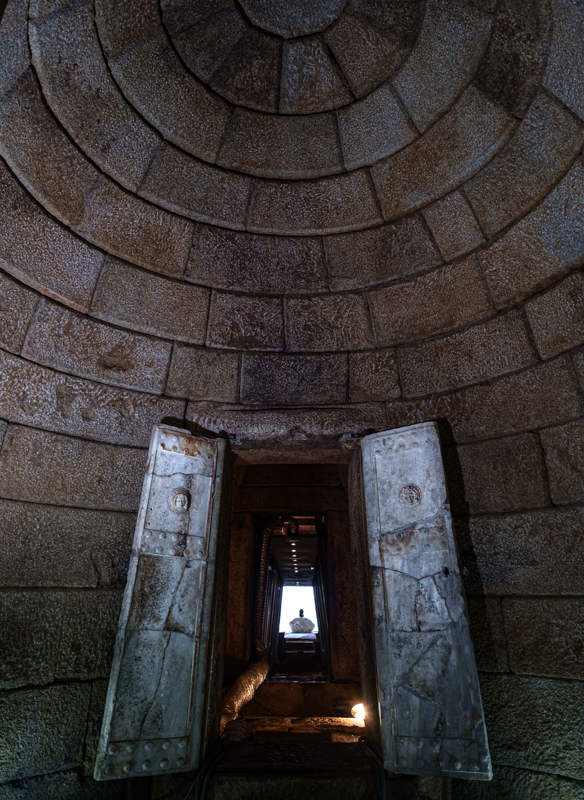 The words "To Seuthes," written on one of the silver vessels and on a bronze helmet found there, have led some historians to conjecture that the tomb belonged to King Seuthes III (ca. 330-300/295 BC). Others, however, dispute the identification, as Seuthes had died decades before this burial took place, in around 280 BC or even later.

The most astonishing find from Golyama Kosmatka was discovered buried in the mound, not in the tomb itself. It was a beautiful bronze head of a man with an unruly beard and strong features. The head was probably an effigy of the deceased, which had been cut from an actual, life-size statue: another dismemberment, this time symbolical.

Constructed probably at the end of the 4th century BC, the Shushmanets tomb is another intriguing example of Thracian burial architecture in the region. The entrance is decorated with a column in the Ionic style, an obvious influence from Greece. In the round chamber, there is another column, this time a Doric one.

It would be understandable if, after reading about so many tombs, you started to think that the Thracians were so preoccupied with death that they did not care about the living. The Valley of the Thracian Kings, however, proves that this was not so, and this proof is the city of Seuthopolis. 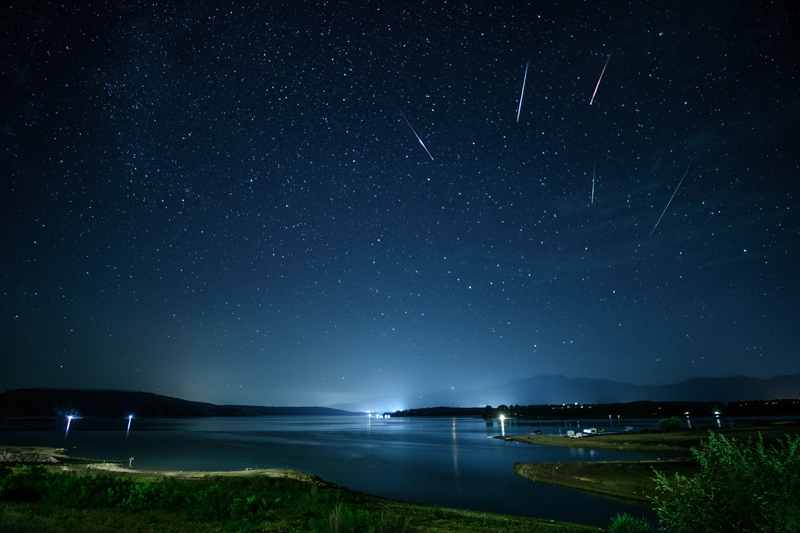 The remains of Seuthopolis, a Thracian city from the Hellenistic era, are now under the waters of Koprinka Dam, near Kazanlak

The city was built after 315 BC, on the whim of King Seuthes III. At that time, he was at the height of his power and had enough money and ambition to follow the fashion set by the Macedonian kings Philip II and Alexander the Great – to found a city and give it his name. The Thracian king built his city, Seuthopolis, and made it the capital of his kingdom. The new city looked like any other in the Hellenistic world. Its paved streets run straight, and there was an agora, or an open-air space for the citizens to meet, talk and conduct business. A portion of the city was reserved for the king and his family.

Seuthopolis did not survive long, and had been abandoned by the middle of the 3rd century BC. A village appeared on its site in the Middle Ages, but it did not last either, and soon earth covered the remains of the forgotten Thracian capital.

The city of Seuthes was discovered in 1948 in the most distressing of circumstances, as it was in the area that was going to be submerged by the construction of the Georgi Dimitrov Dam. The scientific importance of the discovery was incredible, but the Communist government wanted to industrialise the country as quickly as possible, and water supply was seen as more important than preservation of history. Archaeologists were given six years for excavations – the timeframe for the construction of the reservoir – and they did all they could before the waters finally closed over Seuthopolis, drowning the only design-built Thracian city preserved in Bulgaria.

Seuthopolis remains at the bottom of the reservoir (the dam is now called Koprinka) and some of the artefacts found during the excavations are exhibited in the Iskra Museum of History at Kazanlak. There was at one time an ambitious plan to recreate the city and turn it into a tourist attraction, but it never came to fruition. 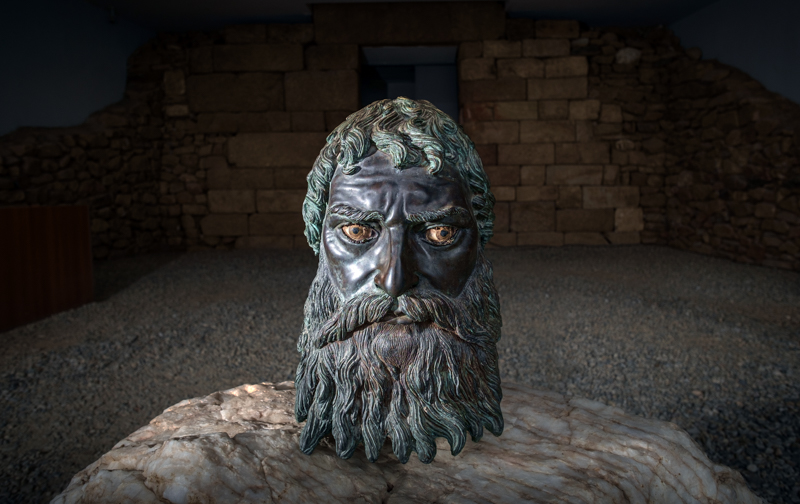 A copy of the bronze head found in Golyama Kosmatka. The head was ritually slain from the statue it belonged to, and was buried in front of the tomb. Latest analyses have shown that the sculpture was made in the nearby city of Seuthopolis by a Greek master, possibly one Silanion, a famed sculptor