This month's football match between Holland and Bulgaria has been causing me great emotional upheaval. 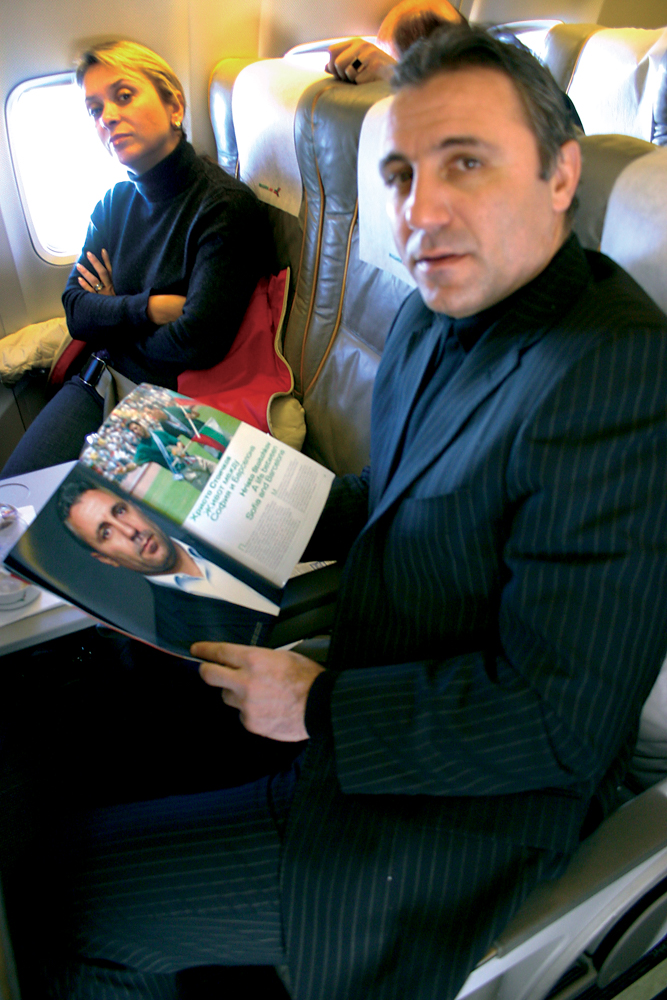 As a preliminary test of my Orange nationalism I went to watch Lokomotiv Sofia play against Feyenoord Rotterdam. I was pleasantly surprised that I felt very good about the goals scored by the Bulgarians, although my local teams in Holland and Bulgaria are Ajax and Levski.

But what about THE BIG GAME? The question remained: should I back the Dutch favourites or dress in red, white and green and cheer for my new brethren?

As I refuse to make my choice on the plebeian and, moreover, "un-European" question of nationality, I decided to choose between the managers of the two sides.

First let's look at the hero of all the Bulgarians, the Overlord of Bulgarian football, Tsar Hristo Stoitchkov. His aggressive on-pitch temper, for which he was much loved by the fans of both his national and club teams, got him into trouble more than once with referees.

Since becoming the national coach of Bulgaria he has also received several warnings. Most recently, he was given a four match ban from the sideline for insulting a referee and for claiming that UEFA's Swedish president Lennart Johansson was "aware in advance of how the game would end", after Bulgaria were beaten by Sweden in a World Cup qualifier in September 2005. Last month he received a fine for chasing Romanian journalists out of a press conference before Bulgaria's clash with their country.

As far as the tactical play of Bulgaria is concerned, I have never been more confused. One game they go long, the next game short, but in both scenarios they seem to rely on the left winger, Martin Petrov, to make it all happen. Even in friendly games Stoitchkov relies heavily on international stars and seems to have little time for new domestic talent in his starting line-ups. After more than a year in charge he still has to imprint his own style on the team.

So, what about San Marco van Basten? The always polite Marco has become a real diplomat in the bigmouth, ball-busting world of football. To date, his selections have proved successful in rejuvenating the Dutch national side. Under his guidance, the Netherlands were unbeaten in their World Cup qualification group and made it through the group stages at the FIFA World Cup 2006, only to be eliminated in a frenzied 1-0 loss to Portugal in the knock-out stage.

Van Basten was heavily criticised for dropping Ruud van Nistelrooy (who had scored 28 goals for Holland) before this game, but his position was never in danger. In the first two qualifying games for Euro 2008 he has again been experimenting with relatively unknown new players from minor Dutch clubs at the expense of some world famous international players.

Although Marco's style is not very exciting, his selections are usually extremely effective. The Dutch selection has "San Marco" written all over it and I believe that they will go a long way on the road to victory in years to come.

So, in the final analysis, I have to say that I favour van Basten over Stoitchkov and thus I chose to wear Orange at this month's match.